Biology
Mosquitoes are vectors for diseases, such as yellow fever, dengue, chikungunya and Zika, which pose a threat to human health on a global scale. Mosquito control is therefore an urgent consideration for public health. Dr Philip Koehler and Dr Roberto M. Pereira of the University of Florida have pioneered two innovative methods of mosquito control, Inz-ECO mosquito chips and Inz-ECO mosquito traps, which can be used in combination with education and other control methods to massively reduce mosquito populations and therefore help prevent disease transmission.

Mosquitoes are an evolutionary success story, and a key part of many of the world’s ecosystems. They are also one of the deadliest animals on the planet. To some fortunate humans, mosquitoes are little more than a buzzing, biting annoyance. To others, however, these tiny insects are carriers of numerous potentially deadly diseases.

Of the more than 3,000 species of mosquito, just three genera bear most of the responsibility for transmitting diseases to humans. Aedes mosquitoes carry, among other things, dengue and yellow fever; Culex are responsible for encephalitis and the West Nile virus. Anopheles are the vectors of probably the most well-known mosquito-borne disease: malaria.

Mosquitoes are considered one of the world’s biggest health threats, with children and elderly people in developing countries most at risk from mosquito-bourne disease. There is an urgent and ongoing need for new methods of mosquito control. This need is only becoming more pressing, as, thanks to climate change, some mosquitoes are known to be expanding their geographical ranges, potentially putting millions more at risk.

The Aedes challenge
Many different methods of mosquito control have been trialed in different parts of the world, targeting either adult mosquitoes or their larvae. All mosquitoes lay their eggs on or near water and are able to take advantage of almost any water source, whether natural or man-made. Waterlogged rubbish, clogged gutters and bird baths can all be excellent breeding grounds for mosquitoes. Targeting the water dwelling larvae is therefore a potentially effective control method; however, the fact that water tends to break down insecticides poses a challenge.

Controlling the Aedes aegypti mosquito is a particularly difficult problem. This species – commonly known as the yellow fever mosquito – previously evolved in its native Africa. However, A. aegypti has expanded its range at an astonishing rate and is now found on every continent except Antarctica. Unlike most other mosquitoes, A. aegypti usually feeds during the day. This means that many common control measures, which focus on killing mosquitoes after sunset, are ineffective against A. aegypti. In addition, female A. aegypti demonstrate “skip oviposition;” basically, this means that they can lay eggs in several different water containers in a relatively short space of time. Skip oviposition means that the “source reduction” control method, in which water-holding containers are diligently removed or emptied, is less likely to be effective.

In laboratory studies, the trap resulted in 95-100% mortality of laying females and prevented all eggs from hatching.

Improving mosquito control
Chemical control, in which larvicides are added to water to kill the developing mosquito larvae, is promising, but tricky to apply in practice. The larvicides may come in the form of liquid, granules or pellets. In the past, some popular larvicides (for example, Abate®) belonged to the class of chemicals called organophosphates. These chemicals, which cause death by disrupting the nervous system, are now banned in the EU due to their harmful effects on other wildlife and potential danger to humans.

Insect growth regulators, which interfere with larval development, are useful in destroying mosquitoes at the larval or pupal stage. However, this type of mosquito control also has several drawbacks: when applied to water, it must be applied at the correct larval stage to be effective; it is relatively slow; and it only lasts as long as there is water in the container.

To address some of the current problems with mosquito control – and specifically control of A. aegypti – Dr Philip Koehler and Dr Roberto Pereira of the University of Florida teamed up with Enrico Levi of Inz-ECO. As a result of this collaboration, Inz-ECO have developed two innovative mosquito-control products: an ovitrap to capture and kill female mosquitoes, to prevent egg-laying and subsequent development of larvae; and mosquitocidal chips, which can be added to any container of standing water.

Inz-ECO mosquito traps
Lethal ovitraps exploit the mosquitoes’ need to lay eggs in water-holding containers. The trap developed by Inz-ECO is a durable, dual-action ovitrap. It contains two forms of insecticide: a larvicide (pyriproxyfen) to prevent the development of larvae, and an adulticide (permethrin) to kill female mosquitoes as they land to lay eggs. These insecticides are embedded in the inner surface of the trap, within a polymer formulation that protects the chemicals from degradation and allows their slow release over time. The larvicide is activated by contact with water. This design neatly overcomes some of the problems of other water-based control methods, as the insecticide remains present in the trap even if the water dries up.

The Inz-ECO trap incorporates several other innovative features. The black and red colouring is proven to attract female mosquitoes, while the sides of the trap have a ribbed structure to reduce airflow, as mosquitoes prefer wind-protected areas. The trap also includes a leaf-infusion mixture as a food source for the larvae and for the female mosquito to find it an acceptable environment to lay her eggs. There is an overflow spout to ensure the trap cannot overfill with water, allowing mosquitoes continuous access to the water surface. The trap is simple and quick to set up – users need only add water – and lasts for three months. Importantly, this control method is also safe for other animals, as the insecticide is contained within the trap.

Inz-ECO mosquito chips
While the Inz-ECO trap has many advantages, a different option is needed for existing water sources. For this purpose, the team created Inz-ECO chips. These mosquitocidal chips can be added to small water sources or containers, such as bird baths, garden ponds or drains. A micro-dose of the larvicide pyriproxyfen is embedded into the surface of the chips. In a similar formulation to that used in the traps, the chemical is contained within a polymer formulation to prevent degradation and allow slow release of the insecticide into the water. Each chip effectively treats up to 20 liters of water; for larger containers, more chips can simply be added. 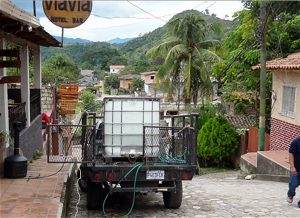 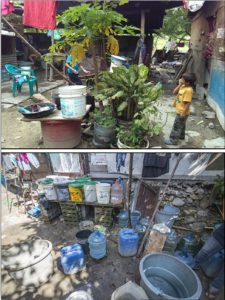 The chips, which are effective for three months, are intended to be added towater containers at the beginning of the mosquito breeding season. The chips are durable, remaining active even when containers are filled and re-filled more than 1,000 times. This method of mosquito control is environmentally-friendly: according to the World Health Organization, pyriproxyfen is safe for use around pets, birds and other wildlife. According to WHO standards, potable water that has been treated with the chips remains safe to drink.

Supporting public health
Recently, the University of Florida collaborated with Operation Blessing, which provides services such as food, clean water and disaster relief to communities in need, to carry out a mosquito-control program in Honduras.

The chips are durable, remaining active even when containers are filled and re- filled more than 1,000 times.

One particular suburb of the second largest city in Honduras, Monte Verde, in western Honduras, was in desperate need of new mosquito-control solutions. In this area, there is no piped water supply, forcing residents to rely on weekly water deliveries. After transport, the water is stored in various types of containers, including drums and buckets. Residents also dig wells that are lined with tires. Unfortunately, this type of water storage creates an ideal environment for mosquitoes to lay their eggs. As a result, the town was experiencing frequent outbreaks of dengue fever, chikungunya virus and Zika disease.

Together with Operation Blessing, the researchers developed an integrated program of mosquito control. A key part of the project was the use of Inz-ECO chips in all appropriate water containers. Alongside this, local school children were educated in mosquito management. Fish, turtles and crustaceans were placed in wells to feed on the mosquito larvae, in a form of biological control.

The program also trialed another innovative Inz-ECO product: mosquitocidal stickers. These stickers, like the chips, contain pyriproxyfen. The stickers can be applied to the inside of water containers, so that they stay in place even when water is dumped from the container. Rather than preventing mosquitoes from laying their eggs in water containers, the stickers destroyed the developing larvae, allowing for effective population control. 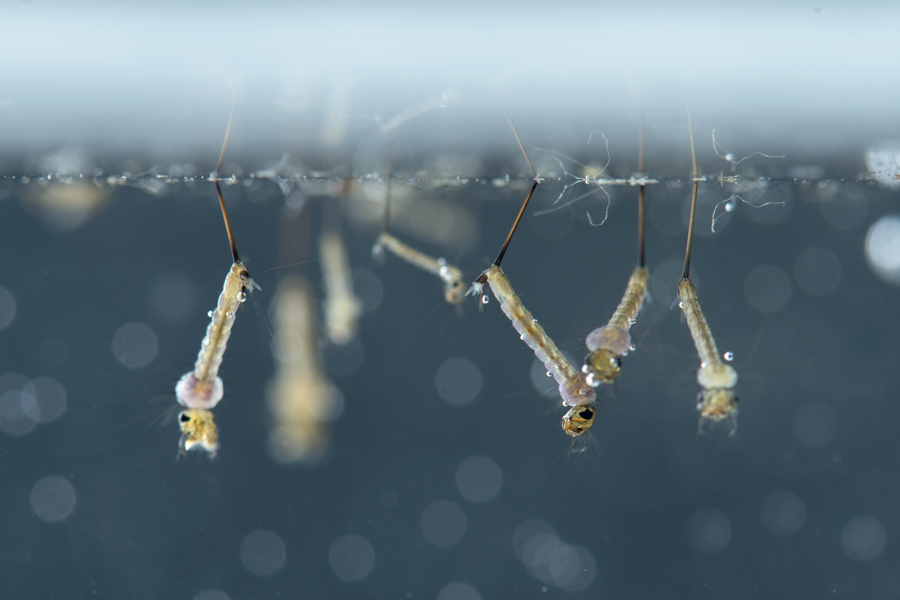 In Monte Verde, the results were clear: a combination of Inz-ECO chips and stickers with education and biological control reduced mosquito numbers to a level where the local population was protected. The traps, chips and stickers developed by Dr Koehler and Pereira and Inz-ECO show huge promise for mosquito control around the world. The products will soon be available for purchase – a spring 2021 release is targeted – and will be an important tool in the ongoing attempts to control the world’s expanding mosquito population.

Find out more at https://www.inz-eco.com/.

Are there similar eco-friendly pest control systems in the pipeline at Inz-ECO?

We are also testing new products for cockroaches and bed bugs. Some are pesticide-free, others involve micro-use of pesticides in innovative ways.

Parker C. (2016) Surveillance and control of Aedes aegypti and Aedes albopictus with a novel lethal ovitrap. Thesis presented to the University of Florida. 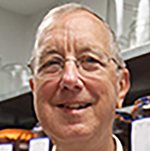 Dr Philip G. Koehler is Professor Emeritus in Urban Entomology at the University of Florida. Dr Koehler has been awarded as Fellow of the National Academy of Inventors and Pest Control Hall of Fame.

Dr Roberto M. Pereira, is a Research Scientist of Urban Entomology at University of Florida. Dr Pereira specialises in urban entomology, conducting research and extension on different aspects of the biology mosquitoes and other insects that live in and around human structures.