Physical Sciences
What is the difference between non-living matter and biological life? In biological systems, individual components have specific functions and tasks to perform, much like artificially made machines, but the key difference lies in the complexity. As new experimental techniques have made it possible to delve further into the microscopic world, more questions have arisen as to how single-molecule species work to give rise to life. Professor Vladik Avetisov at the Semenov Institute of Chemical Physics is studying the design of molecular machines, in particular how the construction of oligomers affects their function.

Living organisms represent a fortuitous harmony of highly complex chemical reactions. As we start to understand in more detail exactly what processes happen on a molecular level, the behaviour of these molecular machines becomes even more incredible.

In our cells, proteins are responsible for a great deal of cellular function. Depending on their role, they might defend the cell from invading viruses and bacteria, or act as messengers, passing on information from the nervous system to coordinate a united physiological response. The function of a protein is reflected in its structure and composition. Proteins that behave as antibodies have large binding sites that have exactly the right composition of atoms and intermolecular interactions to bind one specific antigen. Messenger proteins tend to be quite small and need to be easily transmitted from one part of the body to another.

Many proteins bind to each other or other chemicals to form oligomers, molecular complexes made of a few repeating units. Polymers are longer chain forms of oligomers, made up of larger numbers of repeating units. However, oligomers and polymers are not just formed from proteins but can be very small repeating chemical motifs of synthetic compounds. The properties of the oligomer or polymer are very important for their behaviour and properties.

Professor Vladik Avetisov at the Semenov Institute of Chemical Physics is very interested in understanding how the properties of such oligomer species affect their function and how they can form molecular machines. In particular, he has been focusing on using simulations to understand the behaviour of nanometre scale systems that have trigger-type and switch-type elements, similar to the features in an electrical circuit.

Machine blocks
There are many synergies between molecular-sized machines and engineering construction. One of the systems Professor Avetisov has been studying is an example of an Euler arch. An Euler arch is a system of two rigid rods joined together by a hinge with a spring. The spring bears the load of the arch and keeps it from bending, in a similar way to a keystone. However, while an Euler arch might be stable under static conditions, if sudden longitudinal and lateral loads are applied then a ‘catastrophe’ may occur and the structure might fall down.

The Euler arch is often referred
to as a classic example of the “catastrophe machine”.

While collapsing a hard-built structure might seem catastrophic in itself, catastrophe has a specific meaning in the context of forces. It refers to any change that leads to a sudden change or deformation in the arch shape. The Euler arch is often referred to as a classic example of the ‘catastrophe machine’ as forces applied in either direction will cause strong perturbations of the structure due to the behaviour of the spring.

As the Euler arch is a classical object and its behaviour can be expressed in terms of the spring energy and mechanical work performed by the longitudinal and lateral forces, it is possible to examine the highest and lowest energy geometries from the arch and map out a three-dimensional surface that describes the arch as a function of the combined forces.

For the Euler arch, this surface reveals that there could be two low energy structures, or stable forms, of the arch. These stable forms are separated by a large hill, or energy barrier, that means the system will reach one stable point at a time and remain there. However, if a large amount of energy or sudden lateral load is applied, then the system will jump to another stable minimum. Again, it will become trapped until a sudden external force is applied. This behaviour is known as bistability.

Random wiggles
What Professor Avetisov and his team have found is that random fluctuations in the system can also trigger conversion between the two stable states of the system. For oligomers, where the atoms are in constant motion, a stochastic response can amplify the noise of the random motion, and provide sufficient driving force for the jump in configuration.

The oligomer could be a promising candidate as a two-state, fully switchable machine with incredibly high sensitivity to its environment.

By running simulations that mean it is possible to follow the position of all the atoms in the oligomer as a function of time, Professor Avetisov and his team saw that changes in the bonding interaction from interactions inside the oligomer molecule to interactions of the oligomer with the surrounding solvent could in fact impact the structure. The molecule-solvent interactions are highly important in biology as our cells are very watery environments containing most of the chemistry and proteins. The more open form of the molecule remained relatively unchanged, but if this happened in the highly compressed closed form, it was enough to trigger amplification of the spontaneous vibrations and lead to further structure deformation of the molecule. The system could be observed hopping between the two bistable states on a timescale of nanoseconds.

After changing state, the oligomer also had a memory, or hysteresis, of its previous structure and could be driven back to the original state. The forward and reserve paths were not entirely equivalent, but this means that the oligomer could be a promising candidate as a two-state, fully switchable machine with incredibly high sensitivity to its environment.

Designing the future
Professor Avetisov believes that this bistability could be exploited for intentional design of molecular machines, particularly for single-molecule sensors. Most detection techniques require a certain concentration of molecules to be present in order to be able to see a signal, which corresponds to hundreds, if not thousands, of individual molecules. However, these oligomer machines are capable of changing state on interaction with just one molecule. On finding a clear signature to detect the closed and open state, this nanomachine could be a highly effective sensor for single molecules. This single-molecule sensitivity could be exploited not just for detection though, but for driving tiny nanomechanical and nanoelectromechanical devices to build molecular level circuitry.

What type of oligomers do you want to use for future design applications?

<>We suggest using various bistable oligomers and oligomeric compositions to construct extremely small nanomachines. The choice depends on the application.
If a nanomachine is intended to work inside a living cell, say, to perform a single-molecular detection, it will be preferable to make it with a biocompatible oligomer. If we design a nanomachine with binary function, e.g., for a storage device or an electric net, we will choose a conductive polymer. Other functional elements that are necessary, for example to transform the energy of thermal fluctuation into nanomechanical motion, might also be important to consider when making the choice. 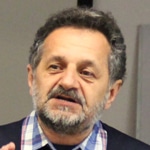 Professor Avetisov heads the Laboratory of Complex Systems Theory in the Semenov Federal Center of Chemical Physics, Moscow, and heads the Moscow Design Center of the Molecular Machine Corporation. He defended his PhD thesis in 1987 and obtained the degree of Doctor of Sciences (Mathematics and Physics) in 1997.

Professor Avetisov and his team are searching for molecular structures that could make up molecular machines.