Biology
The Andean salt flats of Chile are well known for their vast natural beauty. Interspersed within their white salt-crusts, small lakes, springs and creeks can be found alongside the unique microbial communities that inhabit them. Drs Cecilia Demergasso and Guillermo Chong along with a multidisciplinary research team from the Universidad Católica del Norte of Chile, are currently investigating the inhabitants of the rare acidic brine lakes found in Chile with the aim to learn more about the extreme microorganisms surviving in these hostile environments and how they contribute to the complex local environment through biogeochemical cycling.

The Andean salt flats are the remnants of former saline lakes of Neogene/Cuaternary age that dried up along geological and recent times. Originally and in different spans of time, large bodies of water sat within basins of the mountainous regions of the Andes, before severe and cyclic climatic changes gradually led to the evaporation of water from these lakes exceeding the rate of precipitation. Basins were originally closed to store the lakes with no outlet to drain and the evaporation caused them to leave behind thick crusts of salt, and, in several smaller cases, brine lakes mainly fed by underground recharge from the High Andes were also closed as the large basins dried up. 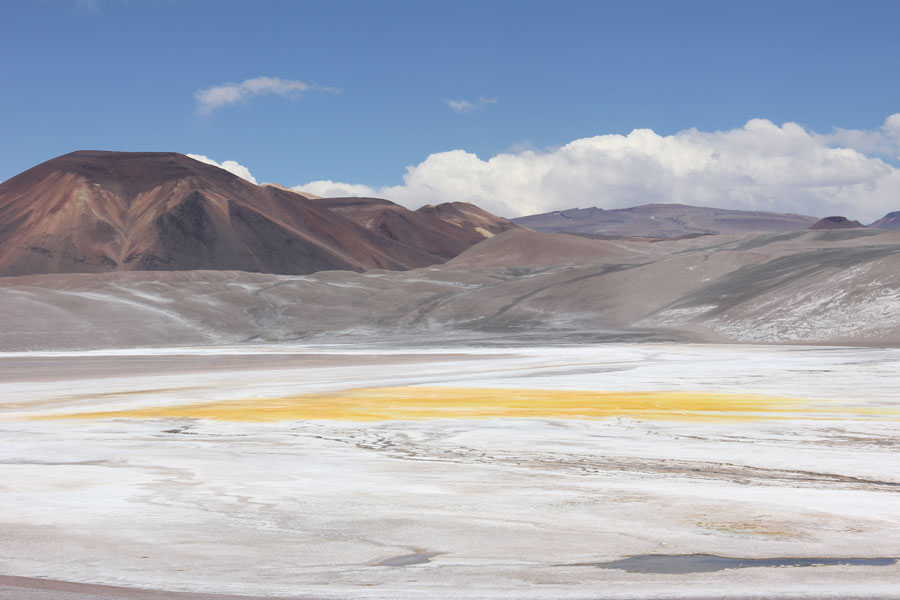 Why so acidic?
Typically, brines of salt lakes are neutral or alkaline. However, in Chile, of the many brines in salt lakes of the region, two rarer acidic brine lake systems – Salares Gorbea and Ignorado (Salar means salt flat in Spanish) – have become the focus of research for Demergasso and Chong’s team. A large variety of hydrated minerals found on Mars using spectrometry, has been shown to potentially be genetically linked to the volcanic activity and the occurrence of acid sulphate solutions like those observed in Gorbea. The combination of both a highly saline and acidic environment means that only the toughest and most resilient microorganisms can survive. The study of the ability of the microorganisms that inhabit and persist in this kind of saline ecosystem has prompted researchers at the terrain as a potential Mars analogue. 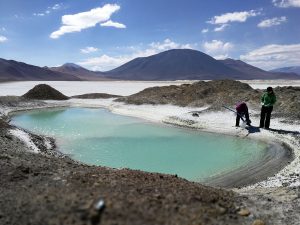 Demergasso and Chong’s research hopes to shine a light on the diverse microbial communities living within the acidic brine lakes to further improve our understanding of our planet’s unique microbial diversity, which could have wide-ranging implications on conservation and potential applications in Biotechnology.

Salar de Gorbea
Acidic brine lakes have only been studied outside of Chile in places like Australia. Salar de Gorbea (the subject of the Demergasso and Chong’s team investigations) could provide a useful site to compare differences in microbial populations due to the contrasting geological and environmental conditions. The acidic brine lake is located in the high Andes (4000m above sea level) with a salinity of 28% – eight times saltier than average sea water. Flanked reasons: the presence of volcanic native sulphur; the oxidation of sulphur releasing sulphuric acid, which seeped into the lakes; and a change in the buffering capacity of local rocks (the ability of the rocks to help maintain and control pH change in the system). 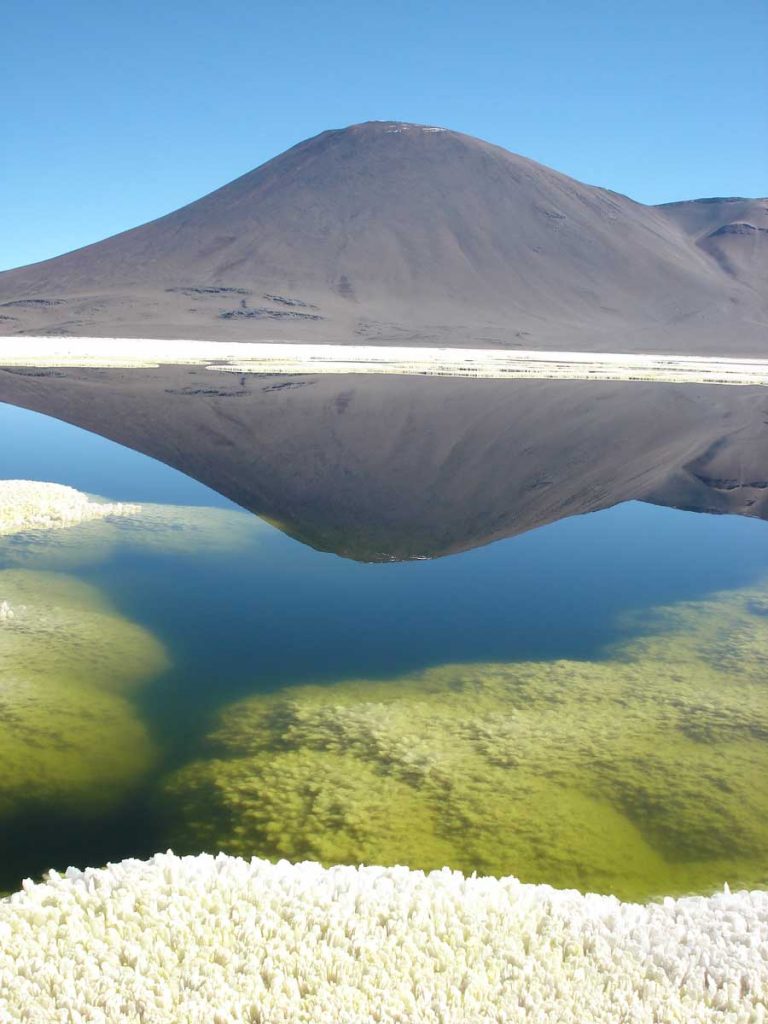 Demergasso and Chong were keen to find out whether microorganisms (known to play a relevant role in acid production by using sulphur as their energy source), such as the bacteria Acidithobacillus thiooxidans, were contributing to the acidity of the system as similar microbes have been detected in other acidic environments such as hot springs and acid mine/rock drainage systems. To do this, several sampling expeditions from five zones across the Salar de Gorbea were carried out over a six-year period. Sediments and brine samples collected in the 2009 and 2011 campaigns were then selected for further analysis. 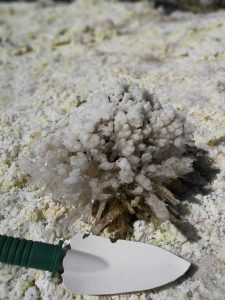 Microbiological analysis was firstly carried out by extracting DNA from the brine and sediments samples. Then the DNA was subjected to Denaturing Gradient Gel Electrophoresis (DGGE) – a technique used in molecular microbial ecology to separate out different fragments of DNA – creating a fingerprint of a complex microbial community living within the samples. Recently, metagenomic analysis have been performed and phylogenetic analysis and bioinformatics tools were then used to determine the species found and characterize the functional content of the genes discovered.

A thiotrophic community
Microorganisms are usually grouped together according to their metabolic activity which enables the basic functions of life – growth, repair and reproduction. Unlike us, who require oxygen and energy from sugars to survive, microorganisms can exploit a range of other elements found in Nature to sustain their activities, including making their own energy sources from inorganic compounds. Typically in salty environments, such as salt lakes, heterotrophic microbes that need salt to survive (halophilic) or can grow under saline conditions (halotolerant) predominate, but analysis of sediment and water samples were taken from the Salar de Gorbea did not detect any of these species, suggesting that oligotrophy – organisms able to live in an environment with very low nutrient levels – is an important feature of survival in such an extreme ecosystem. Instead, Demergasso and Chong found an unusual microbiota characterized by living supported by the energy of sulphur.

The combination of both a highly saline and acidic environment means that only a specialized and resilient microbiota can survive.

A minor range of sulphur metabolising bacteria was also detected from other groups, including sequences related to Alicyclobacillus, Sulfobacillus and Leptospirillum – chemolithotrophic microorganisms that produce energy by oxidation of sulphur.

Based on the metagenome analysis performed by Demergasso and Chong´s team, many of the organisms described were found to be potentially capable of carbon fixation and sulphur oxidation. Carbon fixation is a process whereby inorganic carbon (such as carbon dioxide) is converted to organic compounds, perhaps the most well-known example of organisms capable of carbon fixation are plants, which convert CO2 into sugars using photosynthesis exclusively (autotrophs). Yet, in Demergasso and Chong´s team studies, they found that carbon fixation capability appears to be part of a mixotrophic model that microbes in the acidic brine lakes exploit: their primary production is through the oxidation of reduced sulphur compounds, which allows them to efficiently conserve energy for fixing carbon if necessary.

Demergasso and Chong have discovered a specialized microbiota supported by volcanic sulphur in a salty environment with low iron and organic matter content: a thiotrophic community.

Non-tuberculous mycobacteria
One of the most surprising findings from the analysis was the detection of Mycobacteria living in the acidic brine lakes. The most well-known species Mycobacterium tuberculosis and Mycobacterium leprae have been well studied due to the pathogenic role they play in causing the diseases tuberculosis and leprosy. Yet, there are many other less well-known species that belong to the genus, these are known as non-tuberculous forms and are found in an array of different ecosystems, including engineered and natural water systems, soils and even swamps. This is the first time that Mycobacterium has been found living in an acidic brine system and given that they are representatives of the discovered specialized microbiota, Demergasso and Chong´s team hope to analyze the genomes of the Mycobacteria isolated from Salar de Gorbea to better understand the reason of their abundance in this system. 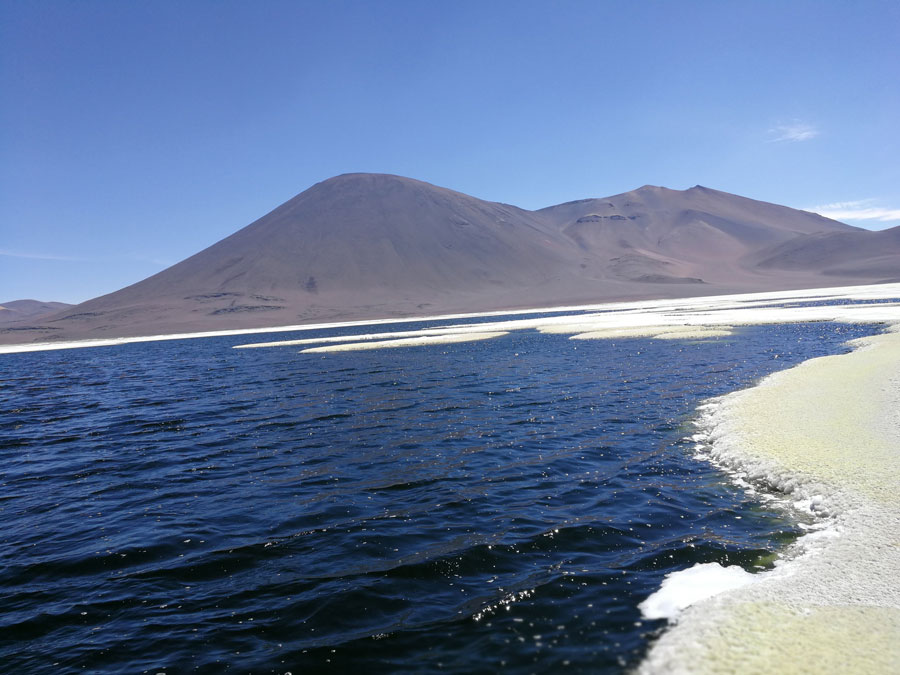 A microbial planet
Microorganisms inhabited the earth long before animals and as such, their ability to adapt and survive in a range of different habitats has led to them being the most abundant organisms on the planet. Microorganisms involvement in biogeochemical cycling makes them important research subjects to help us understand how ecosystems respond to environmental change. By learning more about the microbiota that can survive in these extreme environments, Demergasso and Chong´s team hope that their data can be used to inform conservation which respects and protects our microbial planet.

How can an understanding of acidic brine lakes informconservation in the region?

<> Salars and saline lakes are extremely fragile environments in the Andes framework. Over the last 20-30 years, they have been systematically exploded for their industrial minerals (B, Li, K), but mostly for water extraction. This situation, in some cases, compromises its conservation and its flora, fauna and microbiota. However, there are some existing evaporitic deposits that are practically intact, like Salars with acid brines.

By using publications, describing Salars in terms of geology, microbiota and other characteristics, directly emphasise its importance as a landscape, its unique content in microorganisms, and its biochemical potential as well as its unique habitat worldwide.

What effects do you think a changing climate may have on the unique lake systems?

<> Salars and saline lakes ages are not measured in historical time but in geological time. These deposits have already suffered climate changes that can be observed in the size diminution of the original saline basin, paleocoasts, isolated terraces, and fossils of organic structures (stromatolites), indicating a previous development during a more humid climate.

The acidic brine lakes of Chile: A surprising microbial community was last modified: May 30th, 2019 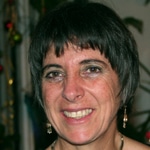 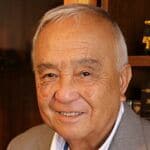 Cecilia Susana Demergasso is the Director of the Center of Biotechnology, Universidad Católica del Norte as well as associate researcher in the Centro de Investigación Científica y Tecnológica para la Minería. Cecilia conducts research in i) Microbiology and their current project is ‘Microbial diversity in the saline domain in Northern Chile’ and in ii) Biotechnology, mainly in the biomining subject.

Guillermo Chong Diaz is a Chilean geologist and Professor at the Universidad Católica del Norte at Antofagasta, Northern Chile. The mineral chongite is named after him. Guillermo’s main research interest is the “Saline Domain” of Northern Chile including items like Climatic/paleoclimatic evolution in Cenozoic times; salt flats and its geomicrobiological environments; salt flats economic settings including lithium/potash deposits and the unique world around nitrate/iodine deposits.

Drs Cecilia Demergasso and Guillermo Chong Díaz research aims to characterise the microbiota of an acidic brine lake in Chile to improve understanding of these complex environments.