Biology
Plants grow and survive by cellular responses to various signals from the environment, other organisms, or from within themselves. The cellular machinery to decode these signals in plants is highly complex and consists of several specialised proteins. One such protein family is the calcium-dependent protein kinase (CDPK) group of proteins that decode developmental and environmental stimuli-induced calcium changes into physiological responses. For the first time, scientists of the Basic and Applied Research on Jute Project at the Bangladesh Jute Research Institute have identified several jute CDPKs and propose novel functions for these proteins in response to environmental stress and fibre development.

One of the criteria for a living organism is that it should be able to sense and respond to changes in the environment. As humans we have innate abilities to respond to sight, sound, smell, taste and touch in unique ways. Within our bodies there are hugely complex networks inside cells that allow these responses to occur. Similarly, plants can respond to their surroundings in a specific manner, involving a huge cellular labyrinth of proteins and small molecules. Calcium is an element that is vital for all living cells. Calcium is needed for the functioning of specific proteins, including calcium-dependent protein kinases (CDPKs), that are specific to plants. CDPKs have been shown to mediate responses to various environmental stresses and developmental signals. Until now there has been no report of CDPKs in jute, due to the lack of knowledge of the jute genome. In recently published work, researchers at the Basic and Applied Research on Jute (BARJ) Project at the Bangladesh Jute Research Institute have identified jute-specific CDPKs that respond to stress and appear to regulate fibre development.

Ready, steady, go
Complex organisms such as plants have the ability to sense and respond to stimuli in the environment by using an intricate web of signalling systems inside cells. This is because plant cells can sense these external changes via special proteins and then translate this signal into a series of chemical responses, ultimately resulting in specific proteins to be produced or activated, in turn turning on or off a physiological response. For example, in response to drought stress, the lack of water is sensed by osmotic stress sensing proteins that then either stop or start cellular mechanisms to trigger water conservation by the plant. This leads to tolerance of water deficit stress, thereby protecting the plant. Therefore the cell signalling processes act as traffic lights, warning and preparing the cell for impending danger that could lead to plant death.

Scientists at the Bangladesh Jute Research Institute are using the knowledge from jute genome sequencing to identify key genes that can control plant stress responses and fibre quality.

Decoding cell signals
A cell signalling process/pathway has a signal, receptor(s), messengers and then an output, which usually turns on or off a gene or a protein. Cell signalling can be compared with mobile/cell phone communications. The sound from a cell phone is detected by a microchip inside the phone. The sound waves are converted to a radio wave that is transmitted to a phone mast nearby. The phone mast then receives and transmits the signal to another phone via base stations and another mast (a local network, also called a cell). This sending and receiving of signals across phones at the speed of light allows effective, rapid communication across locations globally.

Comparing this with a cell signalling scenario, the sound wave could be the signal or stimulus (such as salt/water), the phone mast could be the receptor, and the radio waves, the messengers, before reaching the second mobile phone (target gene or protein). Once the environmental signal is sensed by a corresponding receptor in a living cell, messenger molecules are activated or produced, that trigger downstream responses. Messengers convey information, and in a signalling pathway, a second messenger acts as an intermediary between the receptor and the target (the first messenger is the stimulus). There could be several messengers inside a cell; these include molecules like lipids, cyclic nucleotides and gases, as well as calcium ions. These signalling molecules convey the message to different signalling proteins that ultimately affect the function of the cell.

It’s elementary
Calcium is a basic element that is an essential second messenger in all cells. In response to sensing external or internal cues, specific calcium signatures are produced in every cell. The specificity of this signature determines the downstream effects of calcium in the cell. Calcium signals need to be decoded with the help of specific calcium sensing proteins. There are several types of calcium sensing proteins (sensors) in the cell, that function by calcium attaching itself to a part of the protein. The sensors then change the activity of downstream proteins that alter gene expression or activity of channels that allow passage of ions; this leads to many physiological responses, depending on the stress detected.

Plant-specific CDPKs are unique proteins that are capable of both sensing and responding to calcium signatures in the cell. They are the largest group of calcium sensors, with several CDPK families of proteins found in many plants. CDPKs function as a hub in signalling pathways in response to different situations, including seed germination, seedling growth, tolerance to salinity, cold and drought stress and defence towards disease-causing pathogens. The diversity in function of CDPKs suggests that these proteins have specific structures allowing different chemical reactions to take place. Detailed analysis of the structure of CDPKs reveals specific domains (regions) that allow binding to calcium ions and interaction with other target proteins to modify their function. Although the structure and function of CDPKs have been studied extensively in several plants, there have been no studies so far in jute. Investigating the presence and function of CDPKs in jute opens opportunities to study the function of CDPKs in different stress tolerance responses and in fibre development.

Finding jute CDPKs
With the sequencing of the jute genome (entire genetic content), scientists can now identify and study the function of specific genes in these plants. Jute is important for its fibre, and is used in the manufacture of many goods. The fibres come from the stem of the jute plant, and high quality fibres are important for manufacturing purposes. With changes in the climate, jute plants sometimes suffer with extreme drought or salinity in the soil, which also affects the quality of the fibre. Scientists of Basic and Applied Research on Jute Project at the Bangladesh Jute Research Institute are using the knowledge from jute genome sequencing to identify key genes that can control plant stress responses and fibre quality. To this extent, the researchers have recently identified the CDPK family of genes from two different jute species.

The team concluded that the CDPK genes identified regulate jute fibre development and responses to
salinity and drought conditions.

Using computer-based analysis and different software, the team have identified 34 CDPK genes in total from Chorchorus capsularis and Chorchorus olitorius, the only two known jute species cultivated. After extensive searches of the jute genome, they identified the CDPK family of genes in jute that had distinct sequence similarity with other plant CDPK genes. They also found that the genes encoded proteins that had distinct hallmark domains of CDPKs. In addition, the scientists analysed the expression of CDPK genes in response to salinity and drought stress. Several of them increased in expression following stress, and some of the CDPKs were expressed in fibre cells. Expression of a gene in specific cells or in response to particular conditions indicates that the particular gene is involved in functioning of that cell or regulates response to the condition, respectively. The team therefore concluded that the identified CDPK genes regulate jute fibre development and responses to salinity and drought conditions. 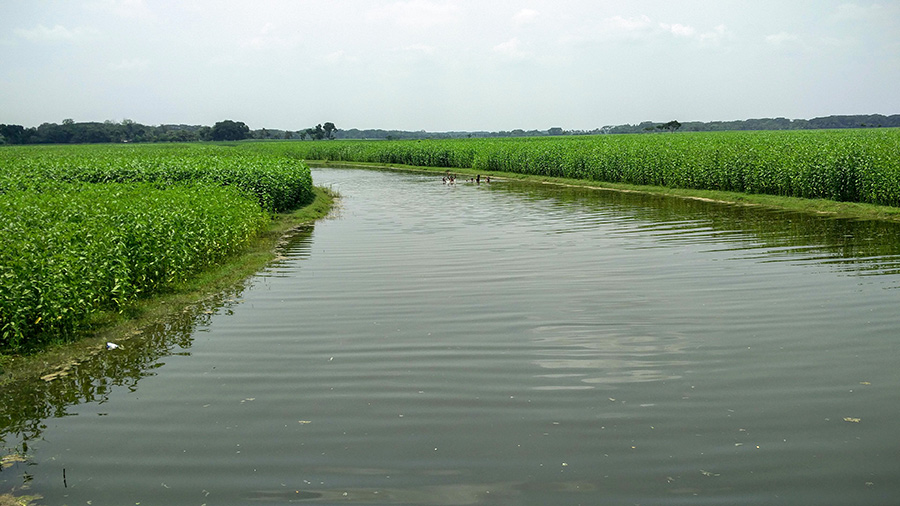 The authors have now set the scene for functional analysis of the CDPK genes in fibre development and stress tolerance. This would then enable targeted breeding to enhance the quality of jute fibres even in response to adverse conditions in the environment.

Is it likely that more than one CDPK will control fibre development? How can this be tested easily?

<> Fibre is the ultimate product of jute, and according to the transcriptome analysis of fibre cell against seedling, we conclude that there are around 7 different CDPK genes in both jute species. These play a crucial role in fibre formation and among them CoCDPK 6, 7, 11, 12 and their corresponding CcCDPK 8, 10, 17, 18, indicating their involvement in fibre cell formation. A detailed functional characterisation through gene knockout experiments would clearly assess effective CDPK gene(s) association with fibre formation.

Is it possible that stress tolerance by jute and fibre development can be enhanced together via targeted breeding?

Calcium-dependent protein kinases (CDPKs) are key enzymes that convey calcium signals into physiological responses by phosphorylation. These genes are promising candidates for the regulation of plant stress tolerance. To exploit these genes in stress breeding programs, it is important to explore their functional roles in response to abiotic stress tolerance. Therefore, we undertook this research for the genomic and functional diversity of jute CDPK genes and their gene expression profile under abiotic stresses.