The dramatic collapse of the Polcevera Viaduct, in the Italian port city of Genoa in 2018, had all the hallmarks of unfortunate tragedy, but to the trained eye it was inevitable. Twenty-five years before the disaster, Professor Janusz Rymsza, a specialist in bridge design and field testing at Poland’s Road and Bridge Research Institute, warned Italian engineers that the design harboured inherent weaknesses. His simple solution for strengthening the structure was rejected because it would have spoilt the aesthetics of the landmark viaduct. After that, it was only a matter of time.

On the morning of 14 August 2018, the north-western Italian port city of Genoa was in the grip of a torrential summer downpour. By 11:30, the visibility was so poor that traffic crossing the landmark Polcevera Viaduct had slowed to a crawl. Suddenly a supporting tower and two successive sections of the viaduct collapsed, together with about 30 vehicles, onto the busy railway line and buildings beneath. Within seconds 43 people were dead. The catastrophe shocked the Italian people, for whom the viaduct was a source of pride for its remarkable engineering and design. Its clean aesthetics were the hallmark of its designer, Professor Riccardo Morandi, to the point that it had become known as Ponte Morandi, or Morandi Bridge (Figure 1). The collapse didn’t shock everyone, however; some knew the viaduct was an accident waiting to happen. Among those was a specialist in bridge design and field testing, who had warned over two decades earlier that fundamental design weaknesses, the lack of possibility of proper maintenance, and an unhealthy prioritisation of aesthetics over good engineering sense, were sowing the seeds of a tragedy.

Professor Janusz Rymsza is the deputy director at the Road and Bridge Research Institute in Warsaw. His interest in the Polcevera Viaduct took a turn in 1993 when he travelled to Milan as a guest of Italy’s Institute for Industrial Reconstruction and Italstrade, the company overseeing critical reconstruction on the viaduct. Rymsza noticed something about the reconstruction that bothered him and decided to investigate further. The key to his concerns lay in the viaduct’s original design.

The risks of unconventional design
There’s a reason why so few bridges are so distinctive – it boils down to the issue of proven construction methods. For a bridge structure to stand out, it needs to reinvite construction ideas, and while this may earn its designers praise it demands a degree of experimentation. The Polcevera Viaduct was distinctive because it was a cable-stayed construction with a difference. Normally on a cable-stayed bridge structure, the road section is supported by dozens of diagonal steel cables attached to a series of vertical pylons. The Queensferry Bridge, Scotland, and the Millau Viaduct in France use this engineering design. Importantly, the diagonal steel cables are a defining construction design feature. However, when Riccardo Morandi designed the Polcevera Viaduct he determined that, for the benefit of aesthetics, the bridge should have no visible cables.

Few would have known that the diagonal prestressed concrete stays that were part of the viaduct’s distinctive clean lines were to be its Achilles heel.

Instead of using steel cables, Morandi decided to use prestressed concrete, which is compressed during production by tensioning steel tendons running inside its length. This gives the concrete the ability to ‘stretch’ under tensile forces. Morandi’s design produced the appearance of concrete ‘stays’ that were actually the equivalent of steel stay-cables protected by an ‘expandable’ concrete sheath. In theory, this ‘sheath’ should have protected the inner steel cables against the elements such as rainwater and, especially in the case of Genoa, the corrosive effects of sea air, making maintenance less frequently needed. The obvious disadvantage was that the steel inside would be more difficult to monitor and maintain. When the viaduct was opened in September 1967, as part of a longer bridge structure that included an overpass, the entire construction was over a kilometre long, with little sign of any unconcreted steel. It was a monument to the marvels of prestressed concrete. Few would have known that the diagonal prestressed concrete stays that enabled the viaduct’s distinctive clean lines would also be its Achilles heel.

The telltale signs of trouble
The first signs of trouble appeared a few years after the bridge entered service, when damage to concrete in the structure was discovered. Later, during renovation work in the 1980s, severe corrosion was found in the upper parts of the diagonal concrete stays. This remained largely unchecked to the point that in 1992, when Professor Manfred Wicke from the Technical University of Innsbruck, Austria, inspected the viaduct, he found multiple instances where steel strands within the stays had broken. He may have couched his report in the restrained language of an engineer, but what he said was clear: the damage rendered the stays dangerously close to failing. Of particular worry to Wicke was the condition of the northern concrete stays of two of the supports – numbers 9 and 11. This would prove critical.

By the time Rymsza examined the viaduct in 1993, engineers had strengthened some of the concrete stays, but only at one of the supports highlighted by Wicke – number 11 (Figures 2 & 3). Furthermore, the man entrusted with designing the strengthening process used on the support was Francesco Pisani, a former colleague of the viaduct’s original designer, Riccardo Morandi. Rymsza was duly concerned. By his calculations, the strengthening process would do little to offset the viaduct’s inherent weaknesses. In short, the viaduct had little significant redundancy (excess) built into its design – it was as strong as its weakest link, and that link was on borrowed time. So, Rymsza decided to do something about it.

A simple solution rejected
In 1993, Rymsza submitted a proposal to Italian engineers for a longer-term solution. He pointed out that Morandi’s characteristic composite steel–concrete diagonal stays were not a good solution for transferring tensile forces because of their insufficient redundancy. He suggested a simple solution that drew on tried and tested components of cable-stay bridge design. It involved bolstering the support with more traditional steel cables below the concrete stays, connecting the span with the vertical pylons (Figure 4). ‘The technically correct solution to reduce the load on the concrete stay was to add independent steel cables attached to the pylon,’ Rymsza explains. He supported his suggestion with what would be a prescient observation – that if they didn’t strengthen the viaduct in this way, it could collapse.

The viaduct had little significant redundancy built into its design – it was as strong as its weakest link, and that link was on borrowed time.

Simple and cost-effective though Rymsza’s solution was, it had a critical fault in the minds of the Italian engineers: the highly visible steel cables would detract from the aesthetics of Morandi’s original design. Whether it was sentimentality towards their legendary designer – who had died four years previously – or a wilful sacrificing of standard construction procedure for the benefits of aesthetics, we may never know, but Rymsza’s proposal was rejected. Instead, the engineers decided to go ahead with their patchwork and, in Rymsza’s mind, wholly ineffective restoration plans. In the meantime, the damaged steel components linking the stays to the towers remained exposed to Genoa’s corrosive coastal air.

The tragically inevitable
Following the collapse of the Polcevera Viaduct in 2018, a series of investigations searched for reasons for its failure. Eventually, a reconstruction of the events of that day proved that Rymsza’s observations 25 years earlier had been tragically accurate. A simulation (Figure 5) shows the upper part of a stay cable linked to the top of number 9 support rupturing, causing the entire prestressed concrete stay, weighing about 280 tonnes, to collapse onto the deck. With no redundancy built in – such as Rymsza’s suggestion of extra supportive steel cables – this immediately put an untenable strain on the diagonal concrete stay on the other side of the road, triggering successive collapses of stays, sections of the road, and the connected vertical tower.

European standards determine that bridge structures, along with other public buildings, should be built to last for at least a century. Yet the Polcevera Viaduct was in use for only twenty years before needing repair, and collapsed after just fifty. Part of the problem could have been misplaced national pride: in wealthy countries today, such projects are no longer seen just in practical terms but have become symbols of power and prestige – the higher, longer, wider the bridge, or the more eye-catching the design, the better. Unfortunately, this can mean that more thought – and money – goes into the aesthetics than stability and maintenance.

Janusz cautions that Polcevera is likely not the only structure in Europe that was designed with more attention on style than substance. ‘The lesson of Genoa should be thoroughly learnt all over Europe,’ he urges. There is a place for experimentation and style, but when human lives are at stake, ‘large, innovative engineering structures should be approached with great caution.’

What is the key lesson that bridge designers should learn from the collapse of the Polcevera Viaduct?

Currently, bridge structures are seldom subject to failure. This may change in the future. The constantly increasing live loads and weather anomalies (high winds and driving rain) cause accelerated degradation of each structure. On the other hand, the effects of the collapse of non-typical structures with large spans and long crossings are proportional to these dimensions and their originality. The disaster in Genoa, Italy, should be treated as a warning to all construction administrations to avoid the construction of unusual and excessively large engineering structures.

The collapse of the Polcevera Viaduct – an avoidable tragedy was last modified: October 28th, 2022 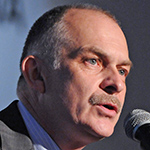 Janusz Rymsza, PhD Eng, is a Professor at the Road and Bridge Research Institute in Warsaw. Since 2009 he has held the position of Deputy Director of the Institute. His professional work relates to the full range of bridge works including designing and field testing, as well as supervision over bridge works.

Professor Rymsza has carried out extensive research to uncover the structural and human factors that led to the collapse of the Polcevera Viaduct.