Physical Sciences
Eukaryotic cells are capable of migrating in response to external stimuli, moving towards a more favourable environment or during processes like wound healing and embryonic development. The mechanisms by which cells migrate is highly complex and often tightly coordinated. Combining mathematical models and theories with physical biology experiments, Dr Tetsuya Hiraiwa, a fellow at the Mechanobiology Institute at the National University of Singapore and his colleagues have elucidated the mechanisms of motion in eukaryotic cell migration.

The number of processes that cells are capable of are immense: from metabolising ATP, the source of energy for all living cells, to propagating impulses that allow your eyes and brain to read and understand this article. The range of functional possibilities vary between different types of cell, however. In animals, a single omnipotent cell (a cell that can become any type of cell within an animal) multiplies and undergoes differentiation during development to become specialised types of cells with specific functions.

The morphogenesis of animals is determined by various dynamical processes, such as deformation (or distortion) and migration. While the field of development biology has made strides in researching the processes that dictate morphogenesis, there is still much to learn about the mechanics underlying such processes. Dr Tetsuya Hiraiwa from the Mechanobiology Institute at the National University of Singapore and his colleagues in Japan utilise theoretical studies and numerical modelling to elucidate the mechanics of eukaryotic cell migration, advancing the fields of developmental and physical biology.

Which way now?
Cell migration may be spontaneous or it may be directed. In the case of the latter, the direction of migration can be determined by external stimuli, such as the attraction or repulsion to chemicals in the environment (known as chemotaxis). Several kinds of eukaryotic cells, including the single cell slime mould Dictyostelium discoideum, exhibit chemotaxis. But, how does a cell know which way to move?

Among the numerous processes that go on in cells, the asymmetrical distribution of organelles, signalling systems, and particular factors in the cytoskeleton establish cellular polarisation. It is this polarity that determines the direction of cellular motion and is known as the cell’s internal polarity. Without this internal polarity, a cell cannot move persistently; with it, a cell can maintain its direction of movement. The length of time a cell can maintain directional motion is known as its persistence time.

…the intrinsic polarity that spontaneously forms in a cell can improve its chemotactic efficiency and sensitivity.

Dictyostelium cells have persistence times between 200-600 seconds and are particularly sensitive to chemical gradients, even shallow ones. The sensitivity of Dictyostelium allows cells to respond to transient chemical gradients as brief as one second. This ability to react to such a small change in environmental stimulus suggests Dictyostelium cell’s directed migration under gradients would share common connections with their spontaneous migration patterns. Indeed, a number of researchers conducted studies to investigate the relationship between internal polarity and asymmetric polarity, looking at the influence of the random distribution of chemoattractant receptors in homogenous external environments.

Dr Hiraiwa noticed these previous studies had inaccurately assumed that chemoattractant concentration did not affect the natural fluctuations in receptor occupancy during spontaneous migration, however. To remedy this, he developed numerical models to test the theory that the concentration of a chemoattractant affects spontaneous cell migration. Through this mathematical analysis, Dr Hiraiwa found that the intrinsic polarity that spontaneously forms in a cell can improve its chemotactic efficiency and sensitivity.

To check the applicability of his model, Dr Hiraiwa and his colleagues compared his theoretical data with real data from physical biology experiments with Dictyostelium cells. He found the results from both theoretical and practical studies were similar, implying that Dictyostelium cells improve the accuracy of their chemotaxis by forming intrinsic polarities.

Extending the mathematical model to study collective motion of multicellular communities, Dr Hiraiwa proposed a new model of chemotaxis with cell-cell communication. Collective cell migration is essential for normal morphogenesis of multicellular organisms. For example, the formation of various organs require effective collective motion of neural crest cells. In particular, he investigated the type of cell-cell communication known as Contact Inhibition of Locomotion (CIL). CIL allows cells to chemically communicate and spontaneously adjust their intrinsic polarities when they touch in order to avoid overlapping.

The results from this theoretical study revealed that CIL impacts the direction of collective cell migration. While cells perform CIL, migration direction is ordered spontaneously across the multicellular community. Further, Dr Hiraiwa found that CIL improves the accuracy of chemotaxis compared to single cell migration. Now, the group is investigating the application of his theory and model to study a wide variety of collective behaviours of migrating eukaryotic cells.

Going in circles
Pursuing further research into collective cell migration, Dr Hiraiwa turned his attention to the morphogenesis of epithelial tissue (the layer of tissue that forms the outer surface of an organism). Collective epithelial cell motion is essential in wound healing processes, cancer metastasis, and early stage embryonic development. Unlike the single cellular organisms like Dictyostelium discussed above, the migration of epithelial cells is a tightly coordinated process.

…the migration of epithelial cells is a tightly coordinated process.

Drosophila melanogaster (fruit flies) use such rearranging polarised cells similarly during metamorphosis, where the genitalia of male flies undergo a 360° rotation. However, the mechanism by which the rotation occurs does not follow conventional cell migration behaviours – it is self-organising and self-directed – and it remained unknown exactly how collective motion is coordinated. Applying the methodology developed by Nagai and Honda (2001) and Fletcher et al. (2013), Dr Hiraiwa set about elucidating the mechanism of epithelial cell rotation in Drosophila through numerical modelling.

Epithelial tissue is comprised of epithelial cells arranged as columns. When viewed from the top, these cellular columns appear as polygons. The methods developed by Nagai and Honda (2001) conceptualise epithelial cells as polygons, simplifying the mathematical model of collective motion while still retaining predictive accuracy. Known as a vertex model, the mechanical forces within cells and between cells interacting at vertices may be incorporated.

Using this vertex model, the team were able to study the influence of cellular polarisation in directing convergent extension. As in the migration of single cells discussed above, cells in the epithelial tissue can exhibit an asymmetric distribution of cellular factors that contribute to the polarisation of the cell. The results from Dr Hiraiwa’s theoretical model suggest myosin, a protein essential in muscle contraction, is asymmetrically distributed during convergent extension. Investigating this further, Dr Hiraiwa found that when epithelial cells lost this asymmetry, cells were incorporated, or intercalated, less frequently into the tissue and the intercalation lost its polarity – the rearrangement of cells during male Drosophila metamorphosis is a tightly regulated and normally exhibits a right-bias for cell intercalation – but without cellular asymmetry, the orientation of cell intercalation was lost. These results suggest that is it the distribution of myosin within a cell that directs intercalation and the rotational direction of Drosophila genitalia.

Mechanistic insight
Through combining physical biology studies with mathematical modelling, the research of Dr Hiraiwa and his colleagues provide novel insight into the mechanisms of eukaryotic cell migration. Whether moving under chemotaxis or self-directed, cell migration is a crucial process across eukaryotes. The theories and models developed by the team may be applied into other cell migration processes, including embryonic development, to better understand the mechanisms that underpin motion.

How does your research impact i) numerical modelling studies, and ii) physical biology research?

<> My aim is that my research bridges the two distinct disciplines: biological sciences and physical studies, through the perspectives of theory and numerical modelling. I hope that my research offers a good example of a multidisciplinary approach, motivating researchers of both disciplines to think about their counterparts more. I believe that, for biologists, looking at the recent field of physics may provide new fruitful concepts to the biological study, and that for physicists, looking at the biological phenomena may provide wide varieties of new wonderful fields to study. 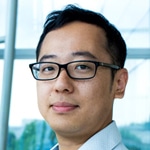 Dr Hiraiwa studied physics at Kyoto University and earned a Ph.D. in Science in 2011. In his post-doctoral career, he worked at various labs in Japan and Germany (RIKEN, MPI-PKS, Free University Berlin, University of Tokyo). In April 2019, Dr Hiraiwa joined the current affiliation as a group leader (Mechanobiology Institute, National University of Singapore).