The Navier–Stokes equations are important for science and engineering, since they describe the motion of fluids. For instance, they are used to model blood flow within arteries, an ocean’s currents, and dynamics of air around aeroplanes. A century ago, theoretical physicists and mathematicians made advances in the use of Navier–Stokes equations. Instead of considering these partial differential equations as a complicated mapping between two sets of variables, they began to view their solution as a point in a suitable infinite-dimensional space. In his landmark paper in 1934, paying careful attention to connections between mathematical approaches and the physical underpinnings of the problem, Jean Leray developed a robust mathematical framework for the analysis of solutions to the Navier–Stokes equations. However, Navier–Stokes equations can not describe the physical responses of fluids with a complex microstructure. In the spirit of Leray’s work, Michal Bathory, Miroslav Bulíček, and Josef Málek, Charles University, Czech Republic, have now developed a robust mathematical theory for viscoelastic fluids. It precisely determines the mathematical object that can be approximated by computational methods. Their theory could potentially serve as an analytical framework, to quantify errors between exact and computed solutions for these models.

Since the first half of the nineteenth century, the Navier–Stokes equations have been successfully used to describe flows of simple fluids, such as water or oil, under standard conditions. To predict the flows of a Navier–Stokes fluid in a vessel (think of water in a garden hose), we also need to know the initial state of the fluid and its behaviour on the boundary (think of the interaction of water with the inner layer of the garden hose). If we have all these pieces of information (ie, the equations in the bulk, the equations on the boundary, and the initial conditions), we can find the explicit formulae for the velocity and the pressure, and solve the Navier–Stokes equations explicitly, but only in special geometrical settings and under restricted type of admissible flows. Consequently, the only other way to obtain information about the character of the flow in the container is either by performing experiments (but these are again done in specific geometries) or by using scientific computing methods and tools.

Today, the latter approach is increasingly used as it is much more flexible (to changes in geometry and model parameters), the underlying numerical methods are becoming ever-more efficient, and computational software and hardware allows researchers to compute three-dimensional flows of the time-dependent Navier–Stokes equations in complex geometries.

Despite their success and broad applications, the Navier–Stokes equations cannot describe the features exhibited by fluids like water and oil in extreme regimes, or describe the behaviour of many liquids and fluid-like materials.

The question then is: What is the precise meaning (definition) of the solution that we are trying to approximate using these advanced computational methods?

Although scientific computing was in its infancy before the Second World War, theoretical physicist Carl Wilhelm Oseen and mathematician Jean Leray asked the question: Can we establish the existence of a solution to the Navier–Stokes equations which corresponds to a state of the velocity given arbitrarily at an initial instant? Leray succeeded in answering this question.

Paying attention to connections between mathematical approaches and the physical underpinnings of the problems, he introduced a concept of solution reflecting available energetic information, proved its existence for any initial state of the velocity with bounded kinetic energy, and investigated its further qualitative properties.

The incompressible Navier–Stokes equations in space dimensions (called d) represent a system of (d+1) nonlinear partial differential equations for the d components of the velocity and a scalar quantity (called the pressure) as the fluid is assumed to be incompressible (preserving the volume of any subset of the fluid-filled container during any admissible motion). Besides the incompressibility constraint (the divergence of the velocity field is zero), the remaining equations are obtained from the balance of linear momentum where the linear relationship between the deviatoric part of the true stress (known as Cauchy stress) and the symmetric part of the velocity gradient is incorporated. The nonlinearity in the Navier–Stokes equations, that is quadratic and of geometric nature, is in the inertia term.

Beyond the Navier–Stokes equations

Despite their unquestionable success and broad applications, the Navier–Stokes equations cannot adequately describe the features exhibited by fluids like water and oil in extreme regimes, or describe the behaviour of many liquids and fluid-like materials. This is because there are various phenomena and rather counterintuitive observations that cannot be captured by the linear relation between the shear-stress and the shear-rate, which is the relation that characterises the Navier–Stokes fluid equations.

Non-Newtonian fluids are fluid-like materials that cannot be described by the Navier–Stokes equations. Non-Newtonian phenomena can be split into two groups. The first one is characterised by a nonlinear relationship between the shear-stress and the shear-rate inclusive of those connected with the presence of activation criteria. This group includes power-law fluids and their various generalisations, Bingham, Herschel–Bulkley, or activated Euler fluids and most of these fluids are covered successfully by the framework of implicit constitutive equations relating (the traceless part of) the Cauchy stress and (the symmetric part of) the velocity gradient (generalising the shear-rate).

The second group of non-Newtonian characteristics includes fascinating phenomena connected with viscoelastic fluids, such as the presence of normal stress differences in a simple shear flow, stress relaxation, nonlinear creep, shear, and vorticity banding. The governing equations for both groups of fluids are more complicated than the Navier–Stokes equations, including an additional unknown (a part of the Cauchy stress), an additional tensorial equation (algebraic for the first group, evolutionary for the second group) and additional nonlinear terms. Each of these groups include hundreds of models designed by engineers and physicists to describe the behaviour of various polymers or geo- and biomaterials such as glaciers, the Earth’s mantle, asphalt binder, synovial liquid, creams, paints and gels, the eye sclera, blood, or food products such as ketchup, honey, and mayonnaise.

From the mathematical perspective and the lines above, it is natural and fundamental to ask whether we can establish the mathematical foundations, in the sense of Leray’s programme, for the models belonging to these groups. Michal Bathory and his mentors have focused on the development of such a theory for a class of models belonging to the second group, namely the viscoelastic rate-type fluid models with stress diffusion.

Models of viscoelastic rate-type fluids with stress diffusion have been around for more than thirty years. They are able to accurately describe the majority of non-Newtonian phenomena and, thanks to the presence of the stress diffusion, they are attractive both from the mathematical and physical points of view. From the physics perspective, the presence of the stress diffusion coefficient is linked with proper finite thickness of the shear or vorticity bands. From the mathematical perspective, the presence of a nice linear diffusion operator (the Laplacian) in the governing equation for the (elastic) part of the Cauchy stress should help in the analysis tremendously.

Interestingly, despite the efforts of various mathematical groups, a theory in the sense of Leray has not been in place. In addition, there is an ambiguity regarding the proper choice of the objective time derivative for this (elastic) part of the Cauchy stress. Moreover, these derivatives include additional nonlinear terms that complicates the analysis in an essential manner. How can Michal Bathory and his colleagues overcome these difficulties?

The essential point in establishing this result is a detailed understanding of the derivation of the fluid models using the tools of continuum thermodynamics.

There are three crucial ingredients. Firstly, the study builds on several papers concerning a general thermodynamic methodology that is able to determine the constitutive equations involving (the part of) the Cauchy stress from the knowledge of two pieces of information, namely how the material stores energy and how entropy is produced. This requires one to specify the equations for two scalar quantities. If they are known, then thermodynamics provides the remaining pieces of information for tensorial quantities and their evolution. There is yet another benefit of this approach, but now on the mathematical side. These two pieces of information that are essential for the complete thermodynamic development also determine the function spaces in which Leray’s programme should be conducted. With this understanding, a second ingredient enters. Bathory and colleagues modify the mechanism how the material stores energy in such a way that it is not distinguishable from standard models provided that the elastic response is small. It however provides a new piece of information for large elastic responses that improves the mathematical qualities of the elastic part of the Cauchy stress. The third ingredient is a novel method, which in the analysis of tensorial nonlinear PDEs guarantees that the tensorial quantity is positive definite. This issue is connected with the development of a suitable approximation system where nonlinear terms in the equations vanish if the spectrum of the elastic part of the Cauchy stress reaches zero.

With these three ingredients, Bathory and colleagues have developed a robust mathematical theory for unsteady flows of viscoelastic rate-type fluids with stress diffusion. The theory covers any choice of objective time derivative of the elastic tensor and is the same type as Leray’s theory for the Navier–Stokes equations, even though the system treated by Bathory et al is much more complicated. The components of the velocity and of the elastic part of the Cauchy stress belong to the same function space. The essential point in establishing this result is a detailed understanding of the derivation of the fluid models using the tools of continuum thermodynamics. Without it, one feels blind in the forest including a vast array of viscoelastic models used in different areas, different contexts, and developed on different (frequently rather intuitive) bases. The overall proof is constructive and starts with a proper finite-dimensional approximation. As such, it can serve numerical analysts as the essential tool in the analysis of convergence of suitably discretized finite-element schemes and for estimating and guaranteeing the error between their solution and the solution computed by carefully designed numerical solvers. The newly designed class of models (that is however close to the standard ones for small elastic responses) is currently tested in computational simulations.

Could your results help to extend real-world applications of viscoelastic fluids in the future?


The merit of our results is that we can guarantee certain qualities of the observed physical quantities at the expense of a slight correction of the conventional viscoelastic models. I expect that further analysis of the newly-proposed models will reveal additional practical qualities, for instance that the elastic stresses of fluids never exceed certain bounds. Such information would be hugely important for real-world applications of viscoelastic materials. Therefore, my answer to the question is yes, but our work is only the first step on
a long journey.
Modelling and analysis of flows of viscoelastic fluids: Beyond the Navier–Stokes equations was last modified: October 7th, 2022 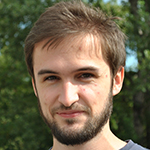 In 2020, Michal Bathory completed his PhD studies at Charles University, where he worked on fluid mechanics, outflow boundary conditions, and the existence theories for various nonlinear systems. Currently, he is a postdoc at the University of Vienna, investigating novel variational approaches to fluid dynamics.