Physical Sciences
The strong interaction plays a fundamental role in our universe. The difficulty of performing precision measurements has limited our understanding of this interaction. Dr Catalina Curceanu at the National Institute for Nuclear Physics (INFN) in Frascati-Rome is leading ambitious new efforts to study and measure the strong interaction in her lab. Her team’s work is centred around an intriguing form of matter in which the electrons of regular atoms are replaced by exotic strange particles named ‘kaons,’ and could help to explain mysteries ranging from the composition of neutron stars, to the origin of mass itself.

In its present form, the Standard Model (SM) of particle physics, our best theory of Nature, describes three out of the four fundamental interactions which govern our universe. The strongest of them, quite appropriately, is named the ‘strong interaction,’ and is described by the ‘quantum chromodynamics’ (QCD) theory. The QCD accounts for the extremely short-range interactions which take place between quarks – elementary particles of the SM.

Among the SM quarks, the ‘up’ and ‘down’ ones can be found in the protons and neutrons which make up the nuclei of regular atoms, meaning they are essential ingredients in basically all matter. However, up and down quarks are just two out of the SM six quark ‘flavours’, each of which having an antimatter counterpart. Through the strong interaction, these twelve elementary particles combine with each other in various different ways, according to QCD.

Altogether, these combinations make up a family of particles called ‘hadrons’. In the 1940s, physicists first predicted that the electrons in atoms could be replaced with negatively charged hadrons – which bind to positively charged nuclei via electromagnetic forces, forming ‘exotic’ atoms. In their research, Dr Curceanu’s team examine how one particular type of these atoms can provide important insights into how the strong interaction operates.

Strong interactions studies with kaonic atoms
Because the strong interaction has such a short range, it is difficult to study experimentally. Moreover, it is poorly understood at low energies, where the interaction is the strongest. One way to obtain this information is by studying exotic atoms, since their energy levels are influenced by the presence of a measurable strong interaction between the quarks inside the hadron and those within the nucleus.

In practice for the lowest levels, the closest to nucleus, the strong interaction adds to the electromagnetic one, and shifts the energy of the level. At the same time, the level is also broadened, since hadron has a finite lifetime, being absorbed by the nucleus. By measuring the shift and width of the lowest level induced by the strong interaction, researchers can then learn about low-energy QCD.

Unprecedented precision experimental studies of strange exotic atoms are performed for a better understanding of the strong interaction.

Among exotic hadronic atoms, the “kaonic” ones are very special. In its negatively charged form, a kaon is made up of an antimatter up quark, and a more exotic ‘strange’ quark. “The physics of kaonic atoms is extremely broad and rich,” Dr Curceanu explains: “The lightest kaonic atoms are the only ‘laboratory’ where the strong interaction between kaons and nucleons at the lowest energies, actually at threshold, can be measured. Therefore, they allow us to extract the key ingredients for all models and theories dealing with the theory of nuclear forces, the QCD.” 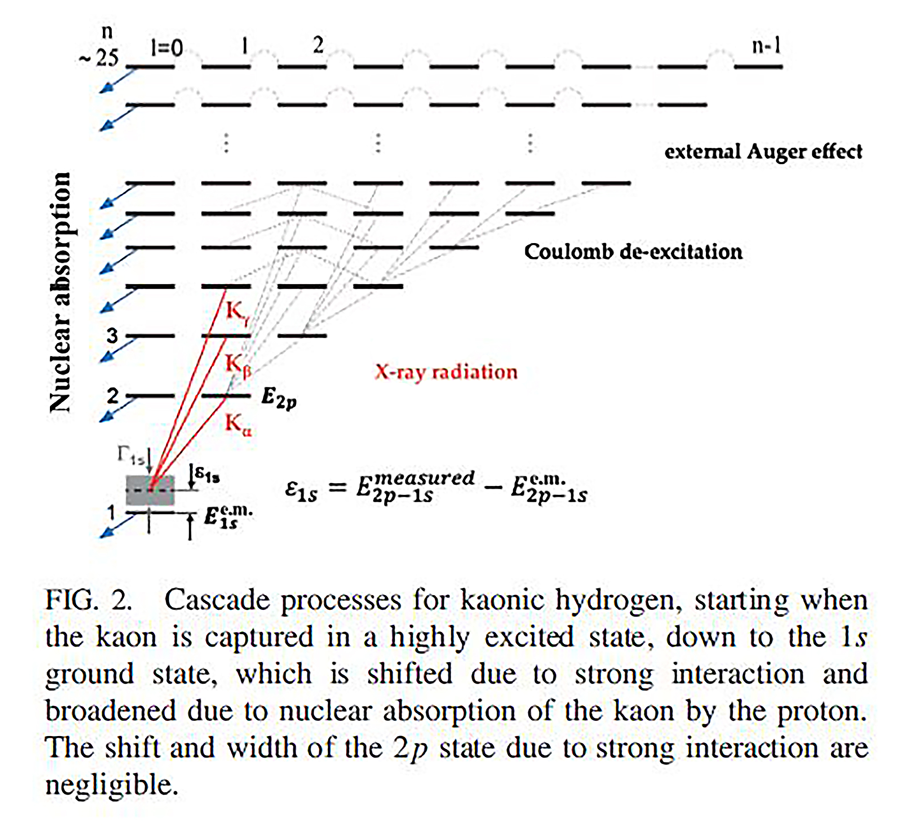 Kaonic atoms in the lab
Over several decades, the tireless efforts of physicists around the world have enabled them to create and study the lightest kaonic atoms, such as kaonic hydrogen and helium. The process first involves the availability of a kaon beam, such as those at the DAΦNE collider in Italy; as well as the KEK and J-PARC facilities in Japan.

The delivered kaons are slowed down and captured by atoms inside a dedicated target, replacing the electrons. Since a kaon is about 1000 times heavier than an electron, it is captured in a highly excited quantum state of the kaonic atom. The exotic atom will initiate a de-excitation process, towards its ‘ground’ state by emitting x-rays. Since the ground state is affected by the strong interaction the energies of the x-rays will ”measure” the strong interaction between the kaons and the nuclei in the kaonic atoms nearly at threshold.

Challenges taken up in measurements of kaonic atoms
In performing these measurements, researchers had to deal with challenging problems. As with many experiments in physics, observations of the x-rays emitted as kaons jump between quantum states are hindered by unwanted ‘background’ x-rays which have nothing to do with kaonic atom transitions.

Thanks to their latest technological advances, physicists have recently overcome this barrier, as Dr Curceanu describes: “Experimental precision studies of kaonic atoms are incredibly challenging,” she says. “The main challenge is the necessity to detect a weak signal over a large background. Increasing the signal-to-background ratio has required, on the one hand, the use of novel large area detectors with excellent timing and trigger capabilities, and, on the other hand, the use of extremely cold gaseous targets, which avoided the strong reduction of signals.”

These improvements have now been applied to instruments at the DAΦNE and J-PARC facilities. For the first time, they have allowed researchers to perform precision measurements for several transitions down to the ground state in kaonic hydrogen, and to the first excited states in two isotopes of kaonic helium.

The team’s experiments contribute to gain new insights into the structure of neutron stars and into the mass generation mechanism.

From stars to particle mass: explanations for wide-ranging mysteries
The work of Dr Curceanu’s team and colleagues is promising to provide new answers to mysteries in a variety of areas in physics where the strong interaction plays an important role. Perhaps the most exciting of these involve neutron stars – the cores of past giant stars which have collapsed to form rapidly spinning bodies with almost unimaginably high densities. From our limited understanding of these enigmatic structures, they appear to be composed of mostly neutrons, but possibly contain also matter made from strange quarks. This means that the strong interaction involving strange matter such as kaons likely plays an important role in their structure, being governed by the same rules of QCD which apply to kaonic atoms.

On the other side, the team’s experiments could gain new insights into why matter has its mass in the first place. “A better understanding of strangeness in QCD at low energies is helping to unveil the mechanism of ‘chiral symmetry breaking’, which delivers the mass of almost all visible matter in the Universe,” explains Dr Curceanu. “Kaonic atom studies are key to a more complete understanding of the fundamental theories which describe how particles interact, giving birth to nuclei and stars.”

Improving our understanding of QCD
In their future studies, Dr Curceanu’s team and colleagues now plan to create and study kaonic atoms from deuterium – in which the proton in a hydrogen nucleus is joined by an extra neutron, within the SIDDHARTA-2 experiment at DAΦNE and E57 at J-PARC. This more complex situation will reveal yet more complex aspects of low-energy QCD as the kaon moves into its ground state. This future work will allow the researchers to explore the properties and constraints of the strong interaction in intricate detail, and will benefit from increasingly sophisticated measurements as technology advances. As Dr Curceanu concludes, “the future of this sector will further boost a deeper understanding of ‘strangeness physics’ in QCD, with implications from particle and nuclear physics to astrophysics, leading to a better knowledge of the way in which nature works.”

What future improvements to facilities like DAΦNE and J-PARC could make them even better suited to studying kaonic atoms?

<> Presently, the DAΦNE electron-positron collider at INFN-LNF is optimising its parameters such as to increase the number of delivered kaons, while minimising the background, for the imminent SIDDHARTA-2 run aiming to measure for the first time kaonic deuterium transitions. At J-PARC, Monte Carlo simulations are used for the optimisation of the target density, as well as of the geometry of the setup, aiming at a kaonic deuterium measurement at a different density. In the same time, we consider the feasibility of other type of kaonic atoms measurements, with extreme precision, aiming to solve the “charge kaon mass puzzle”, by performing a few-fold better measurement of the kaon mass, and to investigate possible beyond-SM effects with kaonic atoms. 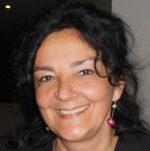 Catalina Curceanu was born in Brasov, Transilvaina, Romania. She leads a research group at the Istituto Nazionale di Fisica Nucleare, Laboratori Nazionali di Frascati (INFN-LNF), Frascati (Roma), Italy, which performs nuclear physics and quantum foundation experiments in various laboratories around the world. Knight for cultural merit of Romania, member of the Foundational Question Institute (FQXi), and winner of 2017 Emmy Noether prize of the European Physical Society, she has authored over 400 scientific publications.

Catalina Curceanu is group leader at INFN-Frascati National Laboratories, and spokesperson of the SIDDHARTA-2 Collaboration which measures exotic atoms at the DAΦNE collider.

I thank all my colleagues from the KpX, DEAR, E570, SIDDHARTA, SIDDHARTA-2, E57, and E62 Collaborations. I also thank the KEK, DAΦNE and J-PARC teams.

The collapse of the Polcevera Viaduct – an avoidable tragedy
Engineering & Technology
Read This Article
How does sleep affect immune-related disease risk?
Health & Medicine
Read This Article