Despite being one of the world’s most iconic rivers, the Thames faces many ecological challenges, and its health has deteriorated severely over recent decades. Martin Richardson from Royal Holloway, University of London, believes that an additional problem is the singular focus of existing research into those challenges. He also believes that a better, more sustainable Thames is possible. In a transdisciplinary case study on Chiswick Eyot in the tidal Thames, Richardson uses remote sensing to assess the effects of issues such as invasive species and climate change, and build a plan for restoration.

From the Roman conquest of Britain to the height of the British Empire, the Thames has been integral to the UK’s history and culture. Sadly, however, it has also been a rubbish dump for London’s waste and run-off for centuries, as urbanisation, agriculture and industry along the river have expanded. Now facing multiple ecological threats, the health and productivity of this iconic river are deteriorating and to date, research into these factors has not led to significant improvement.

The future could look bleak. One researcher, however, believes that a sustained effort from many stakeholders over the next few decades could restore the Thames to ecological health and become an emblem of the UK’s commitment to sustainability.

Martin Richardson, from Royal Holloway University of London, aims to leverage his interest in ecosystem modelling and assessment, and his enthusiasm for collaboration across the Thames’s wide-ranging stakeholders, to bring the river back to levels of health and productivity not seen for centuries. Richardson challenges what he sees as the ‘overly simplistic’ approach of typical single-focus ecological studies, which have failed to keep up with the rapid collapse of ecosystems.

Creating a better Thames
As the main artery of the city and its most significant green space, the regeneration of the Thames would be socially, economically, and environmentally beneficial for London, increasing leisure and ecosystem service opportunities while improving biodiversity.

There are some hopeful indicators of change. Large fines were recently handed out to companies over illegal discharge of raw sewage into our rivers, and the British public is increasingly aware of the importance of rivers for the sustainable development of the country. ‘NGOs and the public are ready to help,’ explains Richardson, ‘we just need to make the connections and a plan in alignment with the Global Biodiversity Framework’.

As the main artery of the city and its most significant green space, the regeneration of the Thames would be socially, economically, and environmentally beneficial.

In new work, Richardson uses a case study at Chiswick Eyot in the tidal Thames, to show the extent of challenges facing the river, and model how best to mitigate them. Through an iterative and adaptive research methodology, he seeks to show how this small island can be regenerated, with implications that positively affect the wider Thames.

Transdisciplinary research at Chiswick Eyot
Chiswick Eyot is a three-acre uninhabited ait – a small river island – in the Thames tideway at Chiswick, London. As one of only a few islands in the Thames, it is an important area for natural capital and biodiversity.

Along with the Thames itself, the island faces many ecological threats, including pollution, invasive non-native species, climate change, and erosion, and needs study and investment to ensure its long-term sustainability as a key habitat. Richardson initiated a transdisciplinary research process (TDR) to come up with a viable plan to maintain and improve the sustainability of the island. TDR is a cyclical process of research, application, and reflection, with adaptive correction as the study develops. This contrasts with the typical linear model of research, which has a more rigid structure. The adaptability built into TDR is essential to understand a rapidly changing ecosystem with multiple stressors.

Richardson used information from previous site studies to build his extensive fine-scale, remote-sensing-based methodology. He incorporated three research disciplines – geography, organic chemistry, and geotechnical engineering – to enable a more holistic understanding of the ecological health of the island and surrounding river. Integral to the efficacy of the project was Richardson’s use of multiple survey methods, including photogrammetry and remote sensing with GIS, species surveys, and soil, and water collections, which generated substantial amounts of data.

Highlighting the threats
This study revealed that the main issues facing the Chiswick Eyot are erosion and soil liquefaction, which releases sediment containing heavy metals and other toxic products like polychlorinated biphenyls. Climate change and rising sea levels will only make these issues worse. Richardson cites sea-level rise as an important stressor that must be mitigated to protect the river against further degradation. Rising sea levels and heavy rain can wash out former landfills and industrial sites around the Thames, further polluting the river and making improvements even harder.

The study also identified phytoremediation as an important approach. This involves using plants to accumulate pollutants, which can then be removed and disposed of safely. The research suggests finding co-benefits and tradeoffs with existing adaptations and leveraging the value of riverfront housing, tapping into the multi-trillion-pound London property market to help fund the scheme.

Rethinking invasive and non-native species
Most of us have heard of invasive or non-native species, and it’s likely our impression of them is bad. Richardson argues that this too can be laid at the door of single-focus research studies that fail to look at the benefits and wider context of the issue under investigation.

The Thames was once filled with thriving populations of salmon, shad, whitebait, and more than one hundred indigenous fish species. However, through increased chemical and heavy-metal pollution, and excess nutrients causing eutrophication, the Thames has become uninhabitable for many of our native species. Now only 15–20 species are sufficiently resilient to support large resident populations in the tidal river.

Supported by his research findings, Richardson argues we need to accept that most of the native species are not likely to return to the Thames in great numbers. Instead, he advocates monitoring and managing the species that thrive there now, to enhance biodiversity as much as possible. ‘We need to embrace the reality of our current predicament,’ he explains, ‘rather than search for bright spots and delude ourselves that things really aren’t at all bad and we can return to the past.’

Making the point with mitten crabs
Richardson points to the mitten crab as an example of why the view of invasive species as a wholly negative stressor on ecosystems needs to be rethought.

Of all the invasive species in the Thames, the mitten crab had been singled out as a blight on the river’s ecosystem. So named for their ‘furry’ claws, mitten crabs had been considered a threat due to burrowing into riverbanks, causing erosion and soil liquefaction. Closer examination, however, revealed these crustaceans are not especially prolific burrowers. Richardson’s study found no evidence that ‘burrows’ were made by crabs at all, and at least some were more likely caused by water and small mammals such as rats or water voles. In any case there is little evidence that burrows are the source of the river’s erosion problems, and the crabs may in fact be of some benefit. This reinterpretation of the role of the mitten crab demonstrates the power of TRD over more traditional single-focus studies which have previously missed this important conclusion.

A restored River Thames would be a beacon of hope for urban river regeneration around the world.

Ecosystem assessment and monitoring
Accurate measurement and management of the multiple stressors on water ecosystems require long-term monitoring at scale: it’s a big task. Richardson believes the solution lies in a continuous, semi-automated process of round-the-clock air, water, and land monitoring across the UK, providing in-depth observations that will give real-time feedback on the environment and the success of any remediation measures put in place. This would enable a constantly evolving adaptation plan that could achieve effective, long-term remediation results.

Continuous assessment would help future researchers determine whether Richardson’s remediation recommendations – such as phytoremediation and bioremediation through human intervention – reduce the levels of chemical and metal pollutants and help mitigate flooding and erosion. This type of ecosystem monitoring could have enormous implications for the environmental and social health of the river.

Making change stick
Despite centuries of significant ecological and structural deterioration, the Thames has only recently seen attempts at mitigation and remediation. This new work has exposed some of the critical stressors the river faces and identified measures that could secure its long-term sustainability.

But Richardson knows that recommendations are just one step toward a solution. Restoring the Thames to its pre-industrial state will take a collaborative approach from multiple stakeholders from academia, local government, NGOs, and the wider public, with ongoing support to help them understand the issues and efficacy of various remediation techniques with some innovative thinking about funding.

By taking a multi-disciplinary approach to research and a collaborative approach to solutions, the Thames can be restored, become a beacon of hope for urban river regeneration around the world, and highlight the UK’s ingenuity and ambition around sustainable development.

Do you believe a rethinking of the role of ‘non-native species’ could enable a less myopic view of biodiversity action planning?

Yes. Firstly, I think future changes will be greater than are currently understood and many native species have already lost habitat in the Thames, so additions should be considered to maintain ecosystem function and avoid potential collapse. Suggesting the acceptance of non-natives is a good way of encouraging traditionalists out of their fixation on endemic species alone for conservation, which will eventually lead to disaster as many more will go extinct (locally). Secondly, non-native species are arriving in the Thames at an ever-increasing rate, and some will go on to become invasive once conditions are right. We can learn from other countries. In Africa invasive plants are used to remediate water by removing contaminants and invasive trout are being used to preserve endangered fish in the United States, so we need more creative thinking with regards to non-native species. 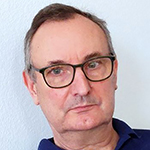 Martin D Richardson is an environmental scientist based at Royal Holloway University of London. He has worked for Hewlett Packard as a systems engineer at the NASA Space Centre Houston and is interested in ecosystem modelling and assessment at fine scale using remote sensing.

Implementing a transdisciplinary approach to researching the multiple stressors facing the Thames, to develop effective plans for mitigation and adaptation.