Some molecules glow as brilliantly as fireflies through a process known as luminescence. Different molecules can emit different colours of light, including red, green, and blue. However, not all colours are as easy to generate as others. Dr Masahito Oh-e at National Tsing Hua University, Taiwan, together with his collaborator Dr Akira Nagasawa, Professor Emeritus of Saitama University in Japan, is using modelling approaches to understand exactly what makes it so challenging to find species that emit light in the deep-blue region with high efficiency and, for those compounds that do, exactly how they generate such colours.

In the deepest, darkest parts of our oceans live some strange and exotic creatures that have mastered combining chemistry with light. No natural light from the sun reaches these depths, but thanks to the chemical skills of the fish, bacteria and crustaceans that live there, there are often eerie and ethereal light shows to be enjoyed.

These sea creatures are experts in bioluminescence – activating chemical compounds so they will emit light. By using special compounds that will light up when they react, these animals can create brilliant displays of light to dazzle and confuse predators, lure in prey and attract mates. For many animals, the step in the bioluminescence process that leads to the emission of light is known as phosphorescence or fluorescence – the more efficient this emission process, the brighter the light that is emitted.

Humans also try to make use of emission processes in lighting and display technologies, such as those based on organic light-emitting diodes (OLEDs). Here, it is key that the luminescence process is very efficient, so the light emitted is very strong but also that the wavelength of light emitted falls within the correct ranges. Getting the right spectrum emitted from each of the compounds in the OLED is essential so that the light has the right colour properties for the application. This is particularly challenging if the desired colours are in the deep-blue region of the spectrum for organic materials.

Not all chemical compounds show evidence of luminescence, let alone with sufficient intensities so that they can be used in various applications. Of the molecules that do emit, though, changing the chemical structure or the atoms in the molecule can have a profound effect on the colours of light emitted and how efficiently luminescence occurs. However, understanding how to tune the luminescence properties by switching chemical groups is a challenging task and one at the heart of Dr Masahito Oh-e’s research at National Tsing Hua University, Taiwan. Dr Oh-e conducted his research in collaboration with Dr Akira Nagasawa, Professor Emeritus of Saitama University in Japan.

Understanding how to tune the luminescence properties by switching chemical groups is a challenging task.

Aiming for efficient deep-blue luminescence using a metal complex
Organic substances are based on carbon and have certain structures, properties, and functions. New types of structures, properties, and functions can be achieved by combining organic substances with metal elements to form novel complexes. In the research presented here, the luminescence itself is derived from the metal-organic bond in the molecule.

Dr Oh-e’s research involves using computational modelling to understand the influence of different chemical groups on the luminescent properties of compounds. He utilises such methods to consider necessary conditions for deep-blue luminescence while evaluating large numbers of molecules, some of which have already been made and measured and others which are new, virtual, potential molecules that may produce deep-blue light. By bringing together large datasets like this, Dr Oh-e is able to identify trends in how certain chemical groups influence the luminescent behaviour of the overall compounds.

The computational methods Dr Oh-e uses allow him to pinpoint how the electrons move through a molecule. One of the most widely used families of compounds for luminescence applications are metal complexes based on iridium. These compounds have an iridium atom at the centre that is surrounded by different collections of other atoms forming what are called ligands. The overall shape and structure of the complex is determined by how many ligands are attached to the metal centre and how large and bulky each of those is.

When molecules interact with light, the electromagnetic field of the light disturbs some of the electrons in the molecule and causes them to move, the degree of which Dr Oh-e considers as a guiding indicator to understand luminescence mechanisms in the deep-blue region. If the molecule absorbs energy from the light, this forms what is known as an excited state, which is inherently unstable. Once the molecule has been excited like this, it will try to find a way to get rid of this excess energy and return to its original state. One way of doing this is luminescence – emitting energy in the form of light. In electronic devices, similar excitations to those triggered by light can be caused using a voltage bias.

Dr Oh-e has been trying to calculate how different ligands and metals influence the way the electrons move upon excitation, while considering why potential deep-blue luminescence is often not compatible with high emission efficiency. Ultimately, the amount of energy the emitted light has determines its colour, and how the electrons move and relax while competing with some relaxation pathways before luminescence influences how much energy is left over for this final step and how efficient it will be.

Dr Oh-e has been able to systematically survey the success or failure of deep-blue luminescence via a guiding indicator: the degree of electron movement from the metal to ligands.

Dr Oh-e points out that when metal complexes are designed for deep-blue luminescence, electrons move from the metal to ligands while carrying a large amount of energy, but these are not the only electrons that move. Other electrons that are originally located on the ligands surrounding the metal also move within the ligands. The electrons from the metal and ligands eventually admix and end up finding some different stabilised states. This admixture of electrons effectively hinders the movement of electrons from the metal to ligands. Further, this initial electron movement leads to the possibility of forming additional stabilised states as well as energetic deactivation from the excited state. A delicate balance of these energetic states is important, and they often create alternative energetic relaxation routes that compete with luminescence. This tendency becomes remarkable when pursuing deep-blue luminescence. These are the reasons why the efficiency of deep-blue luminescence may suffer.

Why are iridium-based complexes suitable for this type of luminescence? Dr Oh-e has also been comparing how the luminescence properties of individual complexes change when the central iridium ion is replaced by another metal ion that has the same electronic structure. Different metal ions donate or take electrons with different efficiencies, which means replacing the central ion with another is equivalent to changing the balance of energy between the metal ion and ligand fragments. Replacing the iridium ion with different metal ions drastically alters the interactions with the ligands because of the difference in the relative energy levels between the metal ions and ligands. The balance of energy states between the central metal ion and ligands is indeed crucial, and the iridium ion has a suitable energy balance with the surrounding molecules for potential deep-blue luminescence while forming complexes with various ligands.

When positively charged cerium ions are in aqueous solution, they can form a range of complexes with other chemical compounds. Dr Oh-e and his colleague have found that when hydrated cerium ions are mixed with a carboxylic acid, diglycolic acid, an unusually strong and stable complex is formed between the two. The special type of interactions between the diglycolate and cerium, known as chelation, often has a large effect on the structure and electron distribution of the molecule.

Chelating compounds are frequently used as biological sensors as they bind a specific ion very strongly. Often, when that binding process occurs, this can have a strong perturbative effect on processes like the luminescence of the original molecule. Hydrated cerium ions are thought to be very bright emitters at wavelengths in the deep-blue region; however, cerium–carboxylate complexes become completely nonluminescent. This is a typical example that the electrons’ new pathways created by the metal-organic bonds disturb the original electron-route for luminescence.

Through Dr Oh-e’s systematic work on a number of hydrated cerium complexes with carboxylates, he has been able to identify the mechanism of the interactions between the ion and chelating species in solution, paving the way for new avenues in exploring how to understand and tune the deep-blue luminescence properties of molecules.

What types of complexes will you be working on next?

<>We are further interested in cerium because of both fundamental science and applications. Cerium exhibits very attractive properties of not only deep-blue luminescence but also biological effects such as antiseptic and virus-removal characteristics, potential anti-cancer activities, and wound and bone healing activities. Further, among rare-earth elements, cerium is the most abundant and is thus an inexpensive, accessible raw material. One of the interests is whether and how to maintain deep-blue luminescence while manipulating electron pathways via the cerium-organic bonds. Revealing the structures of the chelating compounds is fundamental in chemistry, which certainly encourages us to investigate this issue including transitional structures. Moreover, we want to consider incorporating a compound with cerium, which would enable developing an optoelectronic or biological device. 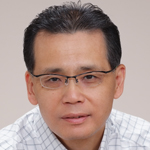 Masahito Oh-e received his MS degree from Tokyo Institute of Technology, Japan, in 1989 and subsequently entered Hitachi Research Laboratory of Hitachi, Ltd. He received a PhD in chemistry from Tokyo Institute of Technology, Japan, in 1998. From 1998 to 2001, he stayed in University of California at Berkeley as a visiting research fellow. After several positions in industry and academia, Dr Oh-e started working as Professor at the Institute of Photonics Technologies, Department of Electrical Engineering, National Tsing Hua University. As one of the inventors of in-plane switching (IPS) liquid crystal displays (LCDs), Dr Oh-e made many frameworks on IPS electro-optical effects, and successfully developed ultra-broad viewing angle TFT-LCDs (recognised as IPS TFT-LCDs), which are now one of the standard display types for LCD TVs, smartphones and tablets. 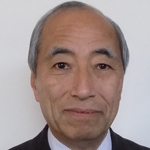 Akira Nagasawa has received his MS and PhD in chemistry from Tohoku University, Sendai, in 1972 and 1976, respectively. From 1976 to 1989 he was Assistant Professor at Tohoku University. During this time, he was visiting the Max Planck Institute for Biophysical Chemistry in Göttingen, Germany (1978-1980). Between 1990 and 1995, Dr Nagasawa was Associate Professor at Saitama University whilst also working at the Institute for Molecular Science, Okazaki (1993-1995). From 1995 to 2013, Dr Nagasawa was Professor at the Department of Chemistry, Graduate School of Science and Engineering, Saitama University.