Health & Medicine
The use of science to compare swimming mechanisms used by humans and fish may shed light on ways in which human performance can be improved. This underpins the research of Professor Hideki Takagi at the University of Tsukuba, Japan, whose work includes the hydrodynamic and biomechanic study of swimming to explore the impact of competing forces on performance of competitive and artistic swimmers and water polo players.

The hydrodynamic study of swimming carried out by Professor Hideki Takagi, University of Tsukuba, Japan, helps swimmers and coaches to understand more about the mechanisms behind the stroke, meaning that they can adjust technique accordingly and encourage high performance in aquatic sports. He uses flow visualisation, which creates a visual representation of the flow patterns present, in order to qualitatively or quantitively analyse the fluid dynamics at play during the swimming process.

Front crawl: a robotic hand
One aspect of Professor Takagi’s earlier work explored the hydrodynamic forces which acted on a robotic arm when mimicking the crawl stroke. A robotic hand and arm were controlled by a computer to mimic a human performing a stroke of crawl. The researchers measured forces acting directly on the hand as it moved through the water, and also the pressure distributions around it. Images of the fluid flow patterns were obtained using 2D particle image velocity (PIV). PIV is a method of flow visualisation which involves seeding the fluid through which the object is moving with small particles which, on illumination of the fluid, become visible. The motion of the visible particles can then be used to calculate the speed and direction, or the velocity, of the flow field being studied.

The data from this study demonstrated that there are two mechanisms which generate unsteady forces during a crawl stroke, the point at which the hand changes direction and the stage at which the hand moves away from the body in a circular motion. Whilst unsteady fluid flow may sound counterintuitive for swimming speed, it is important for enhancing propulsion through a process called vortex recapturing, which harnesses two vortices of opposing directions. Leading on from this work, now that the underlying mechanisms are better understood, it would be beneficial to investigate the flow fields using 3D PIV and a human swimmer.

Unsteady forces act on a hand when sculling
Further work undertaken by Professor Takagi and collaborators addressed a similar question to above, except focusing on the flow field of the hand during a sculling motion, rather than during crawl.

The team again used PIV to investigate forces of motion acting on the hand during the sculling motion. One participant was included, and he was asked to execute a sculling motion in controlled-flow water whilst remaining in a fixed position for as long as possible. 3D motion analysis was also used. The results showed that a skilled swimmer is able to produce large unsteady forces, as with the crawl stroke. These forces are created by the outward movement of the edge of the hand and the opposing inward movement of the palm. Interestingly, the researchers also observed the same phenomenon of unsteady forces in flying insects, suggesting that it is important for swimmers to fully exploit self-produced vortices created during the swimming stroke and that further understanding this process may result in improved sculling techniques. Furthermore, Professor Takagi sees potential for the findings from this study to be applied to synchronised swimming techniques and to help swimmers hold their body position higher in the water.

The mechanisms involved in swimming involve harnessing the propulsive force of the stroke whilst overcoming the resistive force of the water and the drag created by the swimmer themselves.

Fluid forces around a foot during breast-stroke
It is not just the arm and hand that influence fluid forces during swimming, the leg and foot also play a crucial role in producing propulsive force. When humans swim at a constant velocity, the average propulsive force is normally equal to the opposing active drag force. However, there are difficulties in measuring these forces in an experimental setting. Whilst methods have been suggested for estimating fluid forces acting on other parts of the swimmer’s body, as mentioned previously, the lower limbs have received less attention. Therefore, Professor Takagi and collaborators at Tokyo Institute of Technology set out to test the use of a robotic leg to estimate fluid forces acting on the foot during kicking, and to test the translation of this to a human swimmer.

The trial showed that there was good correlation between the estimated fluid forced for the robotic leg and for the swimmer, suggesting that the robotic limb produced realistic results and may be therefore be useful for evaluating breast-stroke kicking motions and ultimately aiding a better understanding of kicking technique.

The effect of leg kick on drag force in front-crawl
More recent work by Professor Takagi and colleagues built on the findings for the breast-stroke leg kick and explored the effect of leg kick on active drag forces during front crawl. As the arms and legs move repeatedly across the water and create additional resistance from splash and waves, it is challenging to evaluate the resistance force acting on an active swimmer.

Due to the complexity of the stroke, it is necessary to investigate the effect that kicking has on active drag by analysing swimmers with and without lower limb involvement.

In this trial, they compared the active drag produced from swimming with arms only or from using arms and legs, the whole stroke. Active drag and passive drag were measured, with active drag being greater in swimming conditions rather than when the participant was in a streamlined position. In contrast, leg movements did not alter the drag coefficient. This suggests that, although upper and lower limb movements may increase resistance compared to the passive conditions, the effect of leg kick may be dependent on swimming velocity.

If propulsive forces generated by the swimmer can be harnessed more effectively, this will result in improved performance.

Indeed, this was one of the first studies to examine the drag caused by leg motion during front-crawl and future research may involve looking at the active drag created when swimmers are exposed to race conditions. A limitation of the study is that each swimmer has a slightly different technique which may influence results, but including other tools such as 3D motion analysis and pressure distribution analysis would deepen understanding of the role of the leg kick during front-crawl.

The 3D visualisation of flow during the dolphin kick
In addition to breast-stroke and front-crawl, the team at the University of Tsukuba have collaborated with researchers from Norway, Australia and other Japanese institutes to examine the propulsive mechanisms of undulatory underwater swimming (UUS), or the dolphin kick, which swimmers often use when pushing off from the edge of a pool after a turn.

A national level swimmer performed over 40 UUS trials. A motion capture system and PIV were used to capture the 3D flow fields around the swimmer, showing that the rotation of the lower limbs and the movement of the feet was responsible for producing vortices that resulted in propulsion of the swimmer. Ultimately, the team were able to describe and explain the propulsive mechanism of UUS, something which was previously not well understood.

Conclusion
Professor Takagi’s combination of sports engineering and human swimmers to accomplish flow visualisation of the forces involved in swimming has expanded our technical knowledge surrounding swimming. If propulsive forces generated by the swimmer can be harnessed more effectively, this will result in improved performance. Furthermore, development of artificial technologies which can be used to accurately recreate and measure the fluid dynamics of human swimmers will remove the variation seen in human swimming technique and improve reproducibility of trials.

You have already looked at the involvement of upper and lower limbs in the two most popular strokes, breast-stroke and front-crawl, but what will your future research focus on?

<> Do you know why the ‘free-style’ event exists in competitive swimming even though 99.9% swimmers swim in that event using front-crawl? Because there is the possibility of inventing a new and even faster swimming style that is currently unknown. Therefore, we would like to contribute to developing a new swimming style for swimmers and coaches through our research outcomes.

The use of fluid mechanics to explore human swimming technique was last modified: November 10th, 2019 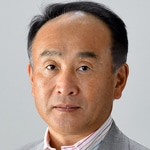 Professor Takagi’s research is focused on the hydrodynamic analysis of the resistive- and propulsive-force in human aquatic activities, with a view to enhancing human performance in aquatic sports.

Japan Society for the Promotion of Science (JSPS).