Community Content
This article has been written and edited by the research team. It has not passed through the quality control procedures applied to content produced by the Research Outreach team.
This article discusses the case of a fourteen year old girl who developed recurrent unilateral peri-orbital swelling and was diagnosed on a third biopsy as a case of IgG4 Related Peri-Orbital Disease.

This is the case of a 14 years old female who initially presented two years back with complaints of painless right upper eyelid swelling as seen in Figure 1A (seen as blue arrows). On examination there was unilateral ptosis of the right eyelid with significant edema, however with a complete mobility of the eye ball. During palpation, a hard, non-mobile lesion was palpated under the eyelid. To confirm the extent of the lesion, a magnetic resonance imaging (MRI) was performed, which showed an enhancing lesion confined by the boundaries of the orbit superiorly, medially and laterally (shown by red arrows). The lesion had a mass effect on the underlying globe (shown as asterisk), however with an intact right optic nerve and the medial, lateral and inferior recti muscles [Figure 1B]. 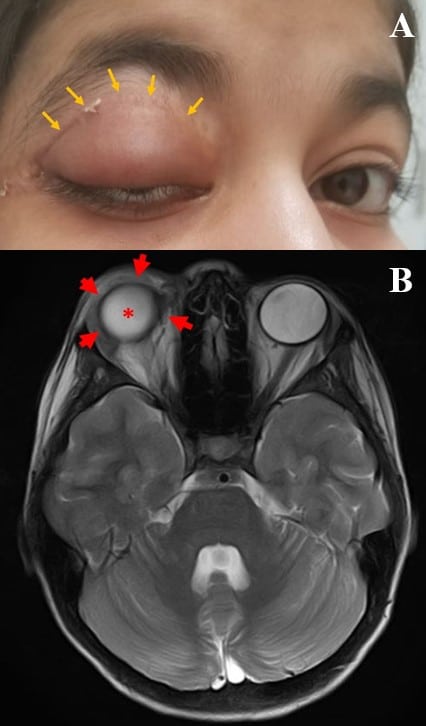 To clarify the diagnosis, a biopsy was carried out which showed fibrous tissue with extensive hyalinization and an admixture of histiocyte plasma cells & lymphoid follicles. Immunohistochemical stains were positive for biomarkers CD68 and IgG. Her blood tests were negative for serum markers: antinuclear antibody (ANA), anti-smooth muscle antibodies (ASMA) and anti-mitochondrial antibodies (AMA). On the basis of these investigations, a likely diagnosis of a pseudotumor was made and she was then started on Prednisolone 2mg/kg/day for a duration of four weeks which was then tapered off.

Initially the swelling decreased and ptosis improved but after tapering the steroids, the swelling recurred which warranted a second biopsy. The histopathology report had findings similar to the initial biopsy, hence Methotrexate 10mg was added to the immunosuppression regime, which aided in reducing the size of the swelling.

Three months later, the patient started developing the swelling again. However, this time with pain and reduced vision in the ipsilateral eye. A second MRI was performed that showed an increase in soft tissue enhancement, which extended posteriorly to the optic apex, closely abutting the optic nerve. A one-stage procedure to remove the retro-orbital lesion and reconstruct the orbit to prevent damage to the optic nerve was planned and successfully carried out.

Histopathological findings were suggestive of fibrous tissue with extensive hyalinization and an admixture of histiocyte plasma cells & multiple lymphoid follicles. Immunohistochemistry was positive for Cytokeratin AE1/AE3, IgG and IgG4. This helped confirm the diagnosis of IgG4-related periocular disease. Methotrexate was increased to the maximum allowed dosage and Rituximab 2 grams, 15 days apart was added. The patient was followed up closely for three months and a repeat MRI showed regression of disease, with no recurrence.