Community Content
This article has been written and edited by the research team. It has not passed through the quality control procedures applied to content produced by the Research Outreach team.
Intelligent advertisements are visual feasts on their own, with sensorial appeals designed specifically to be associated with consumption. Intelligent food advertising is something else. Advertising food products or services is extremely pervasive in contemporary society as a form of communication used to persuade audiences to consume. Food advertising utilises various mediums and approaches: traditional marketing print, broadcast commercials, outdoor advertising, as well as Internet, web-based applications, and social media. Arguably, the overwhelming presence of food ads is easily ignored, especially if they are banal, drab, and shallow. This article aims to show how advertising could impact cognitive and social intelligence by comparing Malaysian and Thai food advertising in their application of semiotic techniques using hidden codes for audiences to think. Other food marketing issues are discussed in concluding this analysis for better appreciation of current challenges.

How semiotics work in advertising

Semiotics is the study of signs, symbols, signification, and their forms of expression and content. Signs are recognisable codes or icons found in texts and visuals, with respective function to denote (represent literally) or connote (suggest meaning), the latter a relatively complex process (Crow, 2015). Semiotic analysis derives from the principle that signs bear, signify or produce “layers” of culturally determined meanings, resulting in specific interpretations. In modern advertising, this involves seeking functional distinctions beyond specific texts or literacy practices. Decoding signs within advertising texts is performed through the process of signification (meaning transfer). This is necessary to understand attributed cultural values in the advertising context. Semiosis in advertising is not a one-way process with a fixed trajectory; it involves communication exchange between the sign and the audience to create negotiated understanding of the coded (hidden) messages, resulting in interesting approaches. Hence, analysis of the target market’s social intelligence in terms of psychological, cultural, and environmental variables enable efficient conveyance of messages to produce desired impact or calls to act, reducing rejection of the advertising concept or idea (Drewniany and Jewler, 2013).

Unfortunately, Malaysian advertising agencies have not been known to favour semiosis as a creative technique, with ads produced to satisfy the criteria of sensorial appeal but little in terms of cognitive stimulation. One notable instance of applied semiosis was McCann Erickson in a series of ads for fast food client KFC in 2011, with coded messages integrated into the visual components. Using icons (signs) that represented the message (spiciness), the ad agency used rhetorical substitution for “fire” (e.g. matches, a building on fire, sunburn, sunscreen), and associating these notions with the spiciness level of the product, representing the varying degrees of burn as symbolic connotation of fieriness. The advertiser was offering a vivid message that its meals were the ultimate indulgence for spicy food cravings. Semiotics analysis demonstrates how persuasive messages are constructed to signify the intended message, despite minimal designing effort. Audiences are engaged cognitively by the invitation to put together the clues, and then to figure out the call to action. 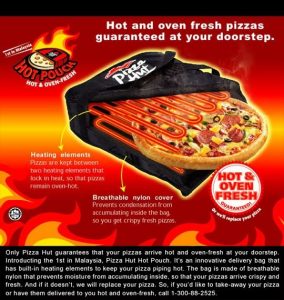 The example shown is a Malaysian ad on the “hot pouch” feature of its product delivery, illustrated via heating element, a fire patterned background, hot red gradient, and tagline: “Hot & Oven Fresh Guaranteed!”. The design denotes hotness literally; but the composition is overwhelmed with information. This exemplifies what Malaysian designers would call “rojak (mixing everything together) design”, where every literal device is applied to represent information without considering aesthetics and effectiveness of the message, or even attempting to nudge the audience into thinking mode.

In comparison, a Thai Pizza Hut advertisement signifies the interaction between the coded message and the targeted audience. A wall phone (normally installed in apartments) is shown with pasta-like cord, wafting soft smoky curls, and the tagline: “Pasta Now Delivered”. The phone cord acts as a visual substitution for the product. The phone signifies the availability of delivery service. This subtle concept representation adds creative tastefulness to regular food advertising. It shows cultural vibrancy in Thai culture, in symbolically projecting social progress of an intelligent consumer society. The hidden layers of sentimental value and humour appeals are characteristics that make Thai ads so significantly impactful albeit driven by culturally flavoured nuances.

With obesity and health-conscious dietary trends among Gen-Y, there is a counter movement towards better representation of health in the last decade, and this has been a regular topic of discussions among stakeholders in industrialising Malaysia (Lim et al, 2013).

Additionally, the rapid rise in usage of social media have uncovered alternative, synchronous ways of engaging urban Malaysian consumers about food marketing that traditional advertising is gradually losing grounds on, unless they attempt to “speak the same language as the target audience” and find new ways such as slangs and nuanced local tongues to heighten connections with discerning audiences.

Competitive events encourage creativity in the advertising industry. Kancil Awards (n.d.) is an example advertising award attesting to the pride in “home-grown Malaysian creative excellence” in advertising, and annual agency winners underscore the industry’s endorsement of the highest standards of creativity bestowed on exemplary works. Industry recognition sustains quality, competency, and credibility, while encouraging strives for higher standards within the creative sector that can compete globally and be taken more seriously.

Advertising and commercials are regulated by the Advertising Standards Authority (ASA, 2008). Rules for media content in Muslim-dominant Malaysia require sensitivity and awareness of social codes (e.g. adherence to alcohol advertising rules). However, social codes per se do not necessarily demand or require critical thinking. On this basis, some creative ads are banned and as a result, society may turn uncritical. Repetitive banality of unchallenging commercials implies that audience could ignore the ads in finding nothing of interest or substance to engage in. A cultural mentality arises from this desire to be “part of the herd” and to be uncritical. At the same time, the regulated nature of advertising compels creative crafting of messages while being mindful of cultural values or conditions that bar the presentation of certain elements deemed inappropriate to society.

It is time to urge for dynamism while acknowledging the values of conservatism within the traditional advertising field. This involves “mastering the rules before breaking them”: instead of merely adhering for the sake of remaining within comfort zones, creative advertising of the future requires adaptiveness to apply coded input, besides producing ads with good layout and compositional elements. A courageous conscience to bend the rules within ethical codes is important; these attributes need to translate into collective initiatives to attain attention and regard from discerning audiences. Thai advertising share cultural similarities with Malaysia, including regulatory policies, yet codes of practice have not hampered Thai creative ability to harness social intelligence as a resource. Malaysia is catching up, but more can be achieved without information overload and bombardment. While marketing hard selling never really leaves us, shallow aesthetics is outmoded and ignored by the more media savvy and exposed consumers. Clearly, semiotics is a helpful advertising technique urging audiences to actively decode and make intelligent choices based on the content and contexts of commercials.