If you have not seen Paywall – the business of scholarship, you should. This is a revealing documentary about the allegedly excessive profits of the academic publishing industry – it focuses almost exclusively on Elsevier – and the damage this is doing to academic research, the careers of individual academics and to the health of populations. The term ‘paywall’ means a virtual barrier which can block people trying to access academic articles online. Paywalls exist where the person, or their employer, does not subscribe to the journal in which an article of interest is contained. But should we be alarmed? In my view, we should not.

I was quite shocked at the levels of profit reported for Elsevier, especially, but also for some other publishers, all juxtaposed with the fact that, mainly, authors and reviewers are not paid for their efforts, without which the academic publishing industry could not exist. But I will return to the issue of profits and ‘slave labour’ (the description used in Paywall) later.
Frankly, in Paywall, I sensed a great deal of hubris, humbug and plain untruths. I will deal with some of the accusations levelled at the academic publishing industry in Paywall below. 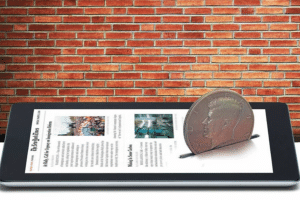 Paywalls prevent access to important academic articles: this is true, they do. And this is especially acute in emerging economies where university budgets cannot support the bundled subscriptions – whereby libraries are ‘locked in’ to paying for a tranche of journals – enjoyed by academics in economically developed countries. Nevertheless, such ‘truth’ about articles being inaccessible without subscription displays some economy with the facts. ‘Inaccessibility’ in this case is being confused with ‘inconvenience’; something we all suffer periodically as academics. I have worked in several universities. These represent a range of universities including two that are regularly in the ‘top ten’ in my country with access to enormous funds for research and library access. None of them has subscribed to every single journal to which I needed access but I have always managed, somehow, to obtain every article I needed, was interested in or considered essential to my work. Not all of these were obtained by inter-library loan or from the British Library as some were not available there, being non-UK articles. Once all the usual options expired I would often – and still do – write to the author and request a copy from them. I have never been refused. Admittedly, some authors are hard to locate, some are deceased, but I have always ultimately been able to obtain any article I wanted. Inconvenient, for sure, but not a matter of life and death, which brings me nicely to another point that was made in Paywall.

Paywalls risk lives: one interviewee in Paywall claimed that his wife’s life has been put in danger due to paywalls. The argument was that vital evidence which might have helped treat his wife’s illness may have been hidden behind a paywall. He was not a doctor, so it was not clear what he would have done with the evidence, but he also made the point that the doctors treating his wife may not have had access to the ‘latest evidence’ either. I sincerely hope that the interviewee’s wife got the treatment she needed but whether she did or not, I cannot believe that a paywall had any influence. The accumulation and implementation of evidence in any field – especially modern medicine – simply does not work this way. The ‘breakthroughs’ in medicine, beloved of the press, rarely take place. Witness how, one week, alcohol has positive benefits but is killing us the next; aspirin is reported as a wonder drug in preventing cardiovascular disease only to be shown soon after to be ineffective. Sometimes this is the result of bad science, but it is also the result of the little-understood phenomenon of regression to the mean. Science depends on the replication of studies and, no matter how rigorous the studies are, some will show positive outcomes, some negative outcomes and most will show outcomes that are not very spectacular. When these studies are accumulated and analysed together, as in the process of meta-analysis, it is seen that – sadly – most things in medicine don’t work or, at least, don’t work as well as most people thought. It is doubtful if paywalls obscure life-saving treatments: when genuine breakthroughs take place they will undoubtedly be published in the press.

Emerging economies are especially disadvantaged by paywalls: I do not doubt that they are, and to some extent, I have considered this above. However, if Paywall is to be believed then people are dying and careers are on hold in emerging economies as a result of paywalls. Again, the generation of evidence is considered above but here it is the implementation of evidence that is more important. Evidence is implemented in medicine by consensus. For example, NICE (the National Institute for Health and Care Excellence) in the UK attempts to regulate healthcare and what doctors can prescribe based on clinical research evidence, taking health economic evidence into account. Such structures may not exist in emerging economies and, indeed, the full range of options for prescribing may not be available. However, a doctor in any emerging economy with access to the internet can search online for accumulated and implemented evidence, such as that shared by NICE, in any part of the world, without the encumbrance of paywalls. I think the adverse consequences of paywalls are exaggerated.

There was an element of ‘mission drift’ in Paywall. Seemingly gratuitously, the film veered into the controversial area of article citations and journal impact factors and raked over a great many old chestnuts in the process. While I think the general – non-academic – public may well have been shocked by the excessive profits and paywall argument, I am sure that they were rather lost here. This is not the place to argue about citations, one way or the other, and I refer readers to two pieces in Medpage Today: one against and one defending the use of citations. The equally controversial issue of open access to academic publications also featured and here, at least, there was an element of balance in the argument. The quasi-religious fervour of some adherents to open access was mentioned and some acknowledged that open access in academic publishing was not a ‘zero sum game’; at some point in the process someone or some institution has to pay something. Publishing costs money.

None from the evil empire of academic publishing, principally represented by Elsevier, participated to defend the industry. If they had, I am sure that they would have pointed to the steps being taken by all academic publishers to permit open access yet retain their stake in an industry which is, admittedly, profitable but which also employs thousands of people across the world. Elsevier, specifically, may have pointed out that the profits reported for the company do not all come from academic publishing; a representative from Wiley may have pointed out that while some journals are very profitable, other are run at a loss and are subsidised by the profitable ones.

I did sense double standards from some obviously well-heeled academics who, I assume, had done very well out of the system as it stands. Yes, there is a lot of free labour. I think not paying reviewers – especially for reviewing for open access journals charging article processing charges, where it could be costed in, is disgraceful. I work with two profitable Wiley journals and profit personally from my work, but I also give my time to a diamond open access journal; no money changes hands to publish or to read. I note that not many of the highly principled academics featured in Paywall are rushing either to publish with us (no impact factor) or especially, to review for us. I also did not hear any of the seemingly affluent academics suggesting that we take a pay cut to reduce our personal ‘profits’ and to do something useful such as funding universal open access. I would be willing to do this… but only if everyone else does.

Roger Watson is Editor-in-Chief of Journal of Advanced Nursing, Editor of Nursing Open and an Editorial Board member of the WikiJournal of Medicine.
.

Paywall the movie: a review

Get Social With Roger

One thought on “Paywall the movie: a review”