Biology
Antibiotic resistance is a global threat affecting humans, pets, livestock and plants. As antibiotic usage to prevent infections is commonplace in livestock farming, there is a significant pressure to adopt alternative farming practices. Dr Dominic Poulin-Laprade and her colleagues at Agriculture and Agri-Food Canada and at the Canadian Food Inspection Agency, investigated how antibiotic-free farming practices affected the presence of antibiotic resistance in Enterobacteriaceae sampled from pigs, and identified the genetic determinants of this resistance. Their results indicated a significant inherited component to resistance, and identified the colocalisation of genes encoding extended-spectrum β-lactamase (ESBL) with genes encoding resistance to other antibiotics.

Antibiotics are essential for treating bacterial infections in people, animals, and sometimes plants. There are many different types of antibiotics, which are effective against different bacteria and act through different mechanisms. However, bacteria are evolving resistance to common antibiotics, making infections more difficult to treat. Regular use of antibiotics makes resistant bacteria more common, as there is then a selective pressure for the evolution and spread of resistance. This means that with every use of antibiotics there’s another chance for resistance to evolve, and with every subsequent use resistant bacteria not only survive, but multiply. To combat this, researchers are now investigating the methods by which antibiotic resistance evolves and operates, to both try to prevent further resistance developing and to create new antibiotics which are more effective.

Extended-spectrum β-lactamases
A particular cause for concern are bacteria which produce extended-spectrum β-lactamases (ESBLs). ESBLs are enzymes which confer resistance to a group of antibiotics known as β-lactams, and include penicillins and cephalosporins. These are two large families of antibiotics used to treat a wide variety of infections, and third-generation cephalosporins (3GC) such as cefotaxime (CTX) are broad-spectrum antibiotics considered very important in medicine. ESBL-producing bacteria are therefore considered a serious health threat. 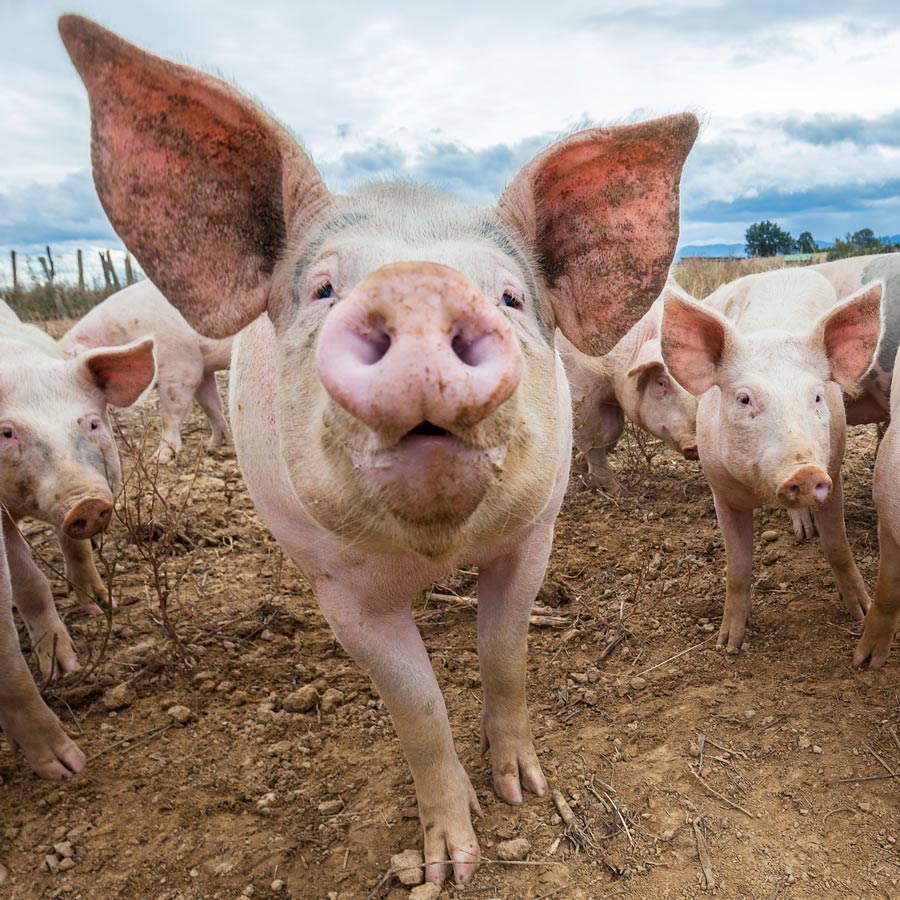 Antibiotics in livestock
Antibiotics are used in vast quantities in livestock farming to prevent infections and ensure that potentially harmful bacteria are not passed from animals to people through meat or manure used on crops. However, this extensive antibiotic use is thought to escalate the development of antibiotic resistant bacteria. Organic farming methods limit antibiotic use to the treatment of sick animals (as opposed to conventional farms using antibiotic prophylaxis), and are increasing in popularity as a result of increasing awareness of antibiotic resistance. Dr Dominic Poulin-Laprade and her colleagues at Agriculture and Agri-Food Canada and at the Canadian Food Inspection Agency, investigated whether rearing pigs without the use of antibiotic prophylaxis reduces the quantities of antibiotic resistant Enterobacteriaceae (gram-negative bacteria including E. coli) found in the porcine intestinal microbiota.

Dr Poulin-Laprade suggests that intervention at the level of breeding farms could be complementary to antibiotic stewardship and more effective in reducing antibiotic resistance determinants that are passed down by the sow.

Antibiotic-free pig farming
Pigs are one of the three largest livestock groups in Canada (with cattle and chickens) and are known to carry resistant bacteria which can be passed to humans through tainted meat and manure. To investigate the effect of swine farming methods on the prevalence of antibiotic resistance, Dr Poulin-Laprade and colleagues took samples from three different antibiotic-free farms and one conventional (CV) livestock farm. The first of the antibiotic-free farm types (AF1) were certified organic, the second (AF2) certified humane, and the third (AF3) certified AGRO-COM. AF1, AF2 and AF3 met the requirements of the Canadian Food Inspection Agency allowing the display of the antibiotic-free claim on their marketed products.

Genetic determinants
Whole genome sequencing can identify all the genes for resistance possessed by sampled bacteria. Plasmids are circular DNA molecules separate from the bacterial chromosome, which often carry genes involved in antibiotic resistance. The research team identified three genes involved in ESBL production, the most frequent of which was only found in samples from the antibiotic-free farms. Two of these three genes were found to be carried by plasmids also containing genes conferring resistance to other antibiotics, and all three were associated with a genetic sequence known as ISEcp1 which is involved in the movement of antibiotic resistance genes from chromosomes to plasmids and between plasmids. The movement of genes across bacterial chromosomes and plasmids creates a continuous genetic diversity that contributes to the success of antibiotic resistance in Enterobacteriaceae, but colocalisation is also prevalent and contributes to multidrug resistance. It is also important to note that there are many factors which work together to determine resistance, and so a wide diversity of mechanisms through which bacteria manifest antibiotic resistance.

Colocalisation and co-selection
This colocalisation of genes for antibiotic resistance is in agreement with the findings from other studies, and will lead to co-selection for resistance to several antibiotics when any one is used. This could explain the prevalence of the genes for ESBL production in the antibiotic-free conditions, as the most common of those genes is colocalised and co-selected with genes for resistance to antibiotics commonly used as treatment in diseased pigs in Canada. Another such finding from this study was that a gene for a penicillinase (an enzyme that acts against penicillin) was colocalised with genes conferring resistance to heavy metals such as copper, and therefore the high copper concentrations in the pig feed could contribute to the maintenance of the penicillinase genes.

Dr Poulin-Laprade suggests that intervention at the level of breeding farms could be complementary to antibiotic stewardship and more effective in reducing antibiotic resistance determinants that are passed down by the sow.

Conjugation
Bacteria are also able to transfer plasmids through a process known as conjugation. Dr Poulin-Laprade and colleagues found a plethora of conjugative plasmids harbouring resistance genes, and testing showed that transference of CTX resistance and ESBL-encoding genes was possible in their sampled bacteria and unaffected by whether or not antibiotics were used in the farming process. They therefore hypothesised that the high levels of CTX resistance in the antibiotic-free sites could be due to the gene being present on a plasmid that is easily passed through conjugation. Additionally, the absence of the most common ESBL-encoding gene in the CV sites could be due to these farms being independent – if no animals are transferred then the enterobacteria present may never have encountered this particular gene and mobilising plasmid.

Additionally, Dr Poulin-Laprade and colleagues emphasise that there is a serious environmental risk from antibiotic resistance. Often, antibiotics can pass through animals and still be effective against bacteria in the soil. This not only impacts us when tainted manure is used on crops which we eat, but also damages the microbiome of the soil, resulting in poor plant growth and resilience. With climate change an ever-present threat, a balance needs to be found for protecting food supply in terms of large, healthy crop yields, and in terms of ensuring the health of livestock.

In your opinion, how effective are antibiotic-free farming practices at reducing antibiotic resistance in the microbiota of pigs?

<>
Antibiotic-free practices do lower the frequency of some antibiotic resistance genes in the microbiota of pigs, but they are not sufficient to eliminate all those that are relevant to human and animal health as observed with the persistence of blaCTX-M-1 in the antibiotic-free herds we studied. Resistant bacteria can have an increased fitness and thrive due to factors other than their resistance to the selective pressure applied by antibiotics. For example, they can be immune to bacteriophages that infect and control bacterial populations, undergo synergies with other microorganisms of the microbiota and be tolerated by the pig immune system. Reducing the use of antibiotics is part of the solution, but antimicrobial resistance is a complex issue that needs to be fought with a diverse arsenal on numerous fronts along the One Health continuum. 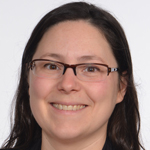 Dr Poulin-Laprade is a researcher at AAFC and an adjunct professor at the University of Sherbrooke and at the Laval University. Her primary expertise lies in bacterial genetics, horizontal gene transfer, and antimicrobial resistance. In recent years she has acquired additional expertise in pig production, pig gut microbiome and immune system.

From Agriculture and Agri-Food Canada:

From the Canadian Food Inspection Agency: