How fast does a solid melt? You might think quite slowly, on a timescale of minutes to hours. However, recent experiments by Dr Emiliano Principi and his team at the FERMI free electron laser show that the melting of carbon by a laser pulse is actually an ultrafast, nonthermal process – taking less than a billionth of a second. By using state-of-the-art X-ray experiments, Dr Principi is reshaping our understanding of the physics of solid state materials.

The challenge is to find a way to ‘see’ processes that happen on a femtosecond timescale. The development of laser technologies capable of generating light pulses tens of femtoseconds in length opened up a wealth of experimental opportunities for studying some of the fastest processes in nature. However, generating ultrafast pulses using a lab-based laser is not equally straightforward for all the energetic regions of the electromagnetic spectrum.

What was more surprising though, was quite how fast the carbon melting process occurred.

X-rays are an excellent way of seeing into the body to detect structural problems like broken bones, X-rays are a powerful tool for looking at the structure of molecules and materials. The challenge is making femtosecond pulses of X-rays that are bright enough to be used for this purpose. Doing this required the development of whole new facilities and technologies culminating in the creation of the X-ray free electron lasers, of which there are still only seven worldwide.

Dr Emiliano Principi is head of the EIS-TIMEX beamline at the Italian free electron laser, FERMI. He has been exploiting this free electron laser’s ability to generate ultrashort, bright X-ray pulses to capture never-before-seen phenomena like the melting of carbon under extreme conditions and the highly unusual behaviour of this system. His work is helping us venture into unexplored phases of matter that may be commonplace on extrasolar planets.

Phase changes
A phase change is what occurs when an object changes from one state of matter to another. This might be the melting of ice, where a solid undergoes a phase change to become a liquid, or the combustion of liquid petrol to produce a gas. One way to trigger a phase change is to change the temperature of the system. Another way is to control the pressure.
We normally think of the boiling point of water as being 100°C but this is only true at a pressure of 1 atm – the average atmospheric pressure at sea level on Earth. If you warm up some water on a mountain, the water will begin to boil at much lower temperatures than 100°C as the pressure is much lower.

In Dr Principi’s experiments at the FERMI free electron laser, he was looking at what phase changes solid carbon underwent at temperatures of more than 14,000°C and pressures over half a million times greater than on Earth. Under such extreme conditions and high temperatures, it is perhaps not surprising that most materials would start to melt. What was more surprising though, was quite how fast the carbon melting process occurred and some of the subtle changes at an atomic level that the sample underwent.

Jittery problems
The first challenge Dr Principi’s team faced was how to generate such extreme conditions in the laboratory. Even the most powerful ovens and heating devices could not quickly reach the temperatures required to generate liquid carbon and any heating would take place very unevenly through the sample.

As well as being very good for generating light pulses that are short in time, femtosecond lasers are capable of delivering huge amounts of energy in a brief moment due to their high peak powers. This means they are one of the preferred tools for laser cutting processes, including for eye surgery or cleaving steel blocks. This also makes them perfect for providing a rapid, sudden temperature change to generate the liquid carbon.

However, Dr Principi needed to couple this tool for triggering the melting process with the X-ray pulses from the free electron laser that would let him watch the phase change as it occurred. Using one light pulse to trigger a reaction and another to watch it is an example of what is known as a pump-probe scheme. The first pulse acts as the pump to get things started while the probe watches the action unfold. By changing the time delay between the arrival of the probe pulse and the pump makes it possible to watch the reaction happening in time.

The first pulse acts as the pump to get things started while the probe watches the action unfold.

The issue for very fast reactions that occur on femtosecond timescales is that the time between the pump and probes pulses must also be very short and very carefully controlled. When the pump and probe pulses come from different sources, as they did in Dr Principi’s experiments where the pump was a tabletop laser and the probe was the giant free electron laser, controlling this time delay becomes very difficult as it requires synchronisation of the two devices.
When your time delays between pulses are significantly less than a blink of an eye, timing jitter between the pulses starts to become very problematic. This is because the timescale for sending electronic signals for synchronization is very long relative to the desired time delay between the pulses. What the FERMI team and Dr Principi were able to do was develop a new technique for synchronising the two pulses to nearly entirely eliminate the timing jitter between the tabletop laser and the free electron laser. With this level of precision and control over the relative pulse delays, one could see even the fastest dynamics in the melting process.

Liquid Carbon
By monitoring how the X-rays were absorbed by the sample, Dr Principi and his team could map how the electronic interactions between all the different carbon atoms in their sample changes during the melting process. This melting is one of the fastest melting processes ever observed – occurring in just 300 femtoseconds – and the team could watch how the atomic bonding changed as the X-ray absorption spectrum evolved during the phase change.
Dr Principi could then explore how these fast melting dynamics changed depending on the particular type of carbon used. While all carbon samples contain the same type of atoms, they can differ in their structural arrangements and density. In some samples the atoms are highly ordered whereas others have more random arrangements.

By making use of these new, highly sophisticated free electron lasers and developing new methods to combine their capabilities with tabletop laser systems, Dr Principi was able to glimpse into the extreme states of matter that exist only transiently and, until now, have only been creatable in computational simulations. The sensitivity of X-rays to electronic and atomic structure will for sure shine light onto further new exciting physical processes and help us understand some of the elusive, fundamental physics behind them.

What is next for your research?
The next step is to extend the photon energy range for the used technique from the C K-edge (~300 eV) up to the Cu L3-edge (~950 eV). This will give us access to novel classes of experiments. For example, the melting dynamics of Fe, a critical element for geophysics research as it is abundant in the Earth’s core under extreme conditions of pressure and temperature. Or the properties of water, in ambient and extreme conditions, by monitoring the oxygen K-edge. Furthermore, future envisaged pump-probe experiments will use the FEL light both as the pump and as probe thus increasing the excited sample volume and the quality of the measurements.

What do you think are the most exciting recent developments at FERMI?
In the next years FERMI will undergo an incremental upgrade aimed at improving the source performance in terms of beam stability, spectral purity and tunability, photon energy range and pulse duration. A conceptual design report for this upgrade will be soon available on https://www.elettra.eu. A really exciting prospect for my research is having at my disposal soft X-ray pulses shorter than 10 fs, thus radically improving the time resolution in my experiments as well as getting access to new scientific cases. 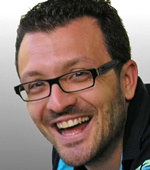 Dr Emiliano Principi obtained his PhD in Physics in 2004. An expert XAS user at european synchrotrons (including ESRF, Soleil, Elettra), he has worked at the FERMI free electron laser exploring ultrafast phenomena in condensed matter since 2011, and has been coordinator of the EIS-TIMEX beamline at FERMI since 2014. Dr Principi has authored 115 peer-reviewed scientific publications and participated in 65 official experiments at large scale X-ray facilities.