Biology
Using DNA nanotechonology, researchers from Rutgers University-Camden have created self-assembly biomimetic systems capable of enzyme proximity immobilisation and enzyme compartmentalisation. Remarkably, these structures have proven themselves capable of forming a multi-enzyme cascade with substrate channeling and regulated reaction circuit. The potential for future applications of this research are wide-ranging and include healthcare and biomedical research to energy release and chemical synthesis.

Enzyme binding
Enzymes and substrate molecules bind together using a “lock and key” mechanism which means the receptive area of the enzyme must be the perfect match to the proffered area of the corresponding molecules (known as a substrate), in order for them to react – exactly like a key in a door. Much research is aimed at deepening our understanding about how these reactions occur in nature. Alongside understanding the natural reactions, science now seeks to understand how these reactions can be artificially replicated, or even regulated.

This is where the research of Dr Jinglin Fu at the Department of Chemistry, Rutgers University-Camden comes in. Dr Fu seeks to develop artificial systems of chemical reactions by acting as architects on a miniature scale. These architects build tiny scaffolds which they use to study the chemical reactions individually. The structures they build help them better understand cellular reactions that occur at the nanoscale. For reference, one nanometre is 80,000 times smaller than the width of a single human hair. The tiny scaffolds the team build measure just less than 100 nanometres across.

Building DNA scaffolds
The ability to design and produce synthetic cellular reactors can be applied to a broad range of scenarios. Building artificial reactors at the nanoscale can better understand the perfect conditions for maximising the efficiency of these reactions. The potential applications of these perfect reactions are wide ranging, from optimised drugs to high-efficiency biofuels.

But what material could be safely used to build a tiny scaffold to house and catalyse complex enzyme-substrate reactions? DNA.

Naturally, making structures at this minute nanoscale is exceptionally challenging. The research conducted by Dr Fu and his team particularly concentrates on making nanostructures utilising the self-assembly of DNA molecules. Self-assembly is a spontaneous process whereby individual, separate molecules come together to form a large and organised structure by recognising each other. DNA is a well-known molecule that naturally forms a double helical structure by self-assembly. One of the most attractive properties of DNA nanostructures is their ability to position and organise other elements into diverse patterns at the nanoscale.

By using DNA nanotechnology to build a structure, the team take maximum inspiration from nature, helping to ensure compatibility of their synthetic scaffolds and cages with the enzymes they are studying. A system which mimics nature in this way is referred to as a biomimetic system.

Replicating nature
For more than ten years Dr Fu has been involved in developing the research to apply this type of DNA scaffolded assembly to a non-living artificial system. He and his team have studied innovative approaches of mimicking and translating cellular mechanisms. The nanostructures they have created are designed to contain artificial enzyme complexes and control their distance, confinements and substrate diffusions paths.

This method allows enzymes and their substrates to be localised on or confined in self-assembly DNA nanostructures, thus speeding up their rate of reaction. This not only reproduces the cellular proximity effect for accelerating reactions, but also protects the enzyme from degradation by compartmentalising it from other chemicals which may interfere.

These compartments which allow for optimum reaction rate are found in nature too. For example, in the cells of our bodies, as well as within the cell organelles (such as mitochondria and lysosomes), there are many compartments that facilitate a wealth of essential bodily reactions.

The swinging arm of success
Remarkably, the artificial biomimetic systems of cages and scaffolds demonstrate that they are capable of carrying out unexpected functions that closely mimic their natural counterparts. The discovery that an artificial system is capable of sustaining an artificial enzyme cascade that closely mimics an important biochemical pathway has huge potential for future biomedical and energy research.

The inspiration for this latest breakthrough came again from nature, and a desire to replicate natural complex cellular functions in an artificial molecular system. In cascade reactions, each enzyme-substrate combination releases a product which allows the next enzyme-substrate reaction to take place. This cascade of reactions forms part of a biochemical pathway in a human body. The pathway uses dehydrogenase enzymes which supply the majority of the energy to a cell, essential for creating amino acids, fats and nucleic acids. A defective pathway can result in conditions such as anaemia in humans.

In this pathway, glucose-6 phosphate dehydrogenase (G6pDH) and malate dehydrogenase (MDH) interact with each other to release energy. G6pDH strips hydrogen atoms from glucose using the glucose sugar substrate and a cofactor called NAD, passing them to MDH, which then creates malic acid. NADH is generated in the process, another key factor in the synthesis of materials essential for life.

In order to replicate this pathway artificially, the team of researchers built a self-assembly scaffold and attached G6pDH to one end and MDH to the other. They then attached the cofactor NAD to a single swinging strand of DNA with enough dexterity to move back and forth between the enzymes on each end of the scaffold. The swinging arm allowed the reaction to continue as it would have happened naturally.

…the team built a self-assembly scaffold and attached multiple enzymes with controlled position.

Alternative applications
Additional trials such as this one have built upon the principles of the biomimetic self-assembling DNA nanostructures. This research provides new insights for creating further biomimetic and nanostructured enzyme reactors with active and regulated functions. It is also an important step towards the engineering of more intricate designs of synthetic cells and subcellular components.

The broader impact of the research conducted by Dr Fu is to offer new tools for the development of further artificial nanoreactors to catalyse enzyme reactions. This allows future research into the ability to translate biochemical pathways into other applications. Research currently suggests there is potential for this method to benefit industries as diverse as medical diagnostics and drug delivery to chemical production and smart material research. Potential future applications based on this research are plentiful with many developments yet to be made. The receipt of a Presidential Early Career Award will ensure that the Fu laboratory is able to continue their important research. The five-year award of $1 million will contribute towards supporting a graduate and postdoctoral student to conduct research in the lab as well as providing paid summer internships for undergraduate students.

In recognition of the award and the backing received from the U.S. Army Research Office, Dr Fu reiterated his intention to explore all potential uses for this technology including exploring the potential to improve war fighter protection and performance.

Additional work by Dr Fu’s laboratory has already seen the invention of a DNA-mediated biochemical reaction circuit that has been used to develop autonomous bio-molecular devices capable of analysing multiple biomarkers and reporting easy-to-read signals for point-of-care diagnosis.

The research does not stop here, with Dr Fu already outlining many potential directions this research could lead in the future. These ideas include designing cell-like compartments that could pave the way for new theragnostic devices or developing methods of biocatalysis to generate bioenergy. He also aims to develop new strategies and tools for engineering key biomimetic elements, including controlled spatial confinements, transmembrane nanopores, chaperone-like enzyme encapsulation and feedback regulation of biochemical reactions. Whatever the eventual outcomes of this research it is clear they will be recorded on a scale far greater than the nanoscale on which they were built.

There are many possible applications of your research, which excites you the most?

<> It is exciting to explore innovative approaches that mimic biological processes and imitate nature. My research aims to deliver technical solutions that will enable the engineering of artificial systems that mimic some of the classic regulatory and organisational mechanisms in cells. One application of these biomimetic systems is to make synthetic reactors that work under non-living conditions for chemical synthesis and energy production. Another potential application is to develop smart biosensors for diagnosing and monitoring disease, detecting risk and deciding which therapies will work best for individual patients. 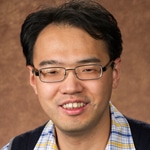 Dr Fu’s research focuses on the development of innovative approaches to mimic and translate cellular mechanisms to a non-living artificial system.