Physical Sciences
Dark matter is one of the most elusive constituents in the universe; escaping our detection for decades since astronomers first theorised its existence. In his research, Dr Jing Liu at the University of South Dakota proposes an unconventional usage of light-emitting crystals to detect dark matter produced in particle accelerators on the Earth. His team is prototyping a detector consisting of extremely cold crystals that would easily pick up tiny energies left in the crystals by dark matter particles; potentially bringing researchers a step closer to a better understanding of the true nature of the elusive form of matter.

Dark matter is believed by many astronomers to be the gravitational glue which holds our universe together. First proposed in the 1970s to explain the speeds at which galaxies rotate as observed by astronomers, it is now thought to play a part in astronomical phenomena ranging from gravitational lensing to cosmic microwave background radiation. Yet although cosmologists estimate that dark matter comprises around 85% of all matter in the universe, no single experiment has ever been able to indisputably detect it directly.

“Dark matter particles pass through our bodies and the Earth without leaving any trace,” Dr Liu explains. “However, there is strong experimental evidence of the existence of dark matter, which might have affected the evolution of the whole universe.”

Even though dark matter hasn’t yet been reliably observed, researchers around the world remain hopeful that it may soon be detected if the right techniques are used, allowing for deeply insightful explorations of its properties. “A direct observation of dark matter particles interacting with normal matter may help reveal the true nature of them,” Dr Liu continues. In his research, Dr Liu and his colleagues explore new ways to improve dark matter detection techniques; ultimately aiming to make them more sensitive to the elusive particles.

Detecting dark matter
Our current understanding is that the Milky Way is submerged inside a much larger dark matter halo; since our solar system as a whole orbits around the galaxy centre, the Earth can feel a constant dark matter wind blowing through it ( in a similar way to a moving car feeling the wind blowing, even on a windless day). The hope is that a tiny percentage of dark matter particles blowing through us may occasionally hit a regular nucleus in the target material of a dark matter detector, transferring a tiny amount of energy to that nucleus. The deposited energy can normally be released in three forms in the target material: light, heat and electric charges. By attaching the right kind of sensors to the target, these signals may be detected. Many salt-like crystals, such as sodium iodide, can emit light when hit by radiation. The process has a fancy name: scintillation. As Dr Liu explains: “Dark matter interactions are expected to leave a very small amount of energy in a detector, which may be released as light quanta in scintillating crystals.”

Currently, two types of light sensors are sensitive enough to detect a single light quantum, or photon: photomultiplier tubes (PMTs) and silicon photomultipliers (SiPMs). They first convert the incident photon to an electron through ‘photoelectric effect’, and then accelerate the electron to an energy that is high enough to kick out more electrons in themselves. Just as a snowball can create an avalanche, the initial electron can create a huge amount of electrons in these sensors, recorded as an electric signal; each tracing its roots to the original incident photon. This useful property has made PMTs and SiPMs key components of many recent dark matter detection experiments.

Producing dark matter
Current dark matter theories put no strict constraint on the possible mass of a dark matter particle. A popular dark matter candidate, WIMPs (Weakly-Interacting Massive Particles) are believed to be as massive as large nuclei found on the Earth. Since they are too massive to be effectively produced artificially, we can only passively wait for natural dark matter particles to fall into our traps, i.e. dark matter detectors.

There is strong experimental evidence (for) dark matter, which might have affected the evolution of the whole universe.

After many years of hard work, physicists are approaching the end of the search for WIMPs. Some have started to look into possibilities favouring much lighter dark matter particles, which have a mass similar to that of an electron. We may be able to produce them in large amounts in particle accelerators on the Earth given their small mass. The process goes like this: a beam of hydrogen atoms are accelerated to very high energy and then dumped into a target made of heavy metals; many lighter particles can be created in such collisions, including perhaps, low mass dark matter particles; by putting a detector close to the beam target, the man-made dark matter may be detected.

Making more sensitive detectors
The amount of energy that could be deposited in a dark matter detector becomes even smaller by these low-mass dark matter particles. The energy threshold of the detector has to be further lowered to make such a detection effective. As Dr Liu points out, “A straightforward way to lower the energy threshold of a scintillation detector is to increase its light yield,” that is, to let the crystal emit more light given the same amount of energy deposition. Interestingly, this can be achieved through a long observed but rarely used property of a few salt-like crystals: they emit more light when they are cooled below liquid nitrogen temperature, which is as cold as the coldest place in the solar system – Pluto.

In 2014, Dr Liu and his colleagues proposed a design for a detector made of such a crystal, which is cooled by liquid nitrogen down to 77 Kelvin – the temperature around which the crystal has the highest light yield. After building their proposed setup at the Kamioka satellite site of the Kavli IPMU, a prominent institute of the University of Tokyo, Japan, Dr Liu’s team successfully detected over 20 photons for every keV (a unit of energy) of energy deposited in the crystal. Dr Liu claims that to his knowledge, this was the highest light yield ever achieved in the world with that type of crystal; four times higher than that of the KIMS experiment, a dark matter experiment utilising the same type of crystals.

A straightforward way to lower the energy threshold of a scintillation detector is to increase its light yield.

Further improvements
The initial setup contained only 93 grams of crystal and a PMT with a light sensitive circular surface that has a diameter of 2 inches. In their latest setup at the University of South Dakota, a 1.56 kg of cylindrical crystal was examined by two 3-inch PMTs from its two flat end surfaces. A similar light yield is achieved. This proves that the technique also works with larger crystals that have practical values.

Currently, Dr Liu’s team is establishing another prototype detector replacing PMTs with SiPMs, which can be operated at even lower temperatures with much higher photon detection efficiencies. Furthermore, SiPMs are made of thin silicon wafers, hence occupy much less space than bulky PMTs. This makes it possible to operate the detector system
in a much more compact refrigerator.

Future aims
With these improvements in place, the researchers now hope to deploy a 10 kg detector near the Spallation Neutron Source (SNS) at the Oak Ridge National Laboratory, Tennessee, USA, to detect possible low mass dark matter particles produced in the SNS. With his team and technology, Dr Liu has joined the COHERENT collaboration.

The collaboration is coordinating various experimental efforts at the SNS searching for dark matter and other new phenomena beyond the Standard Model of particle physics. They will expand their area of research to include neutrinos – tiny, chargeless particles which only interact with other matter extremely rarely, but are believed to be significant components of our universe.

Initial calculations carried out by the COHERENT collaboration have revealed very promising physics using the 10 kg detector at the SNS, for both dark matter and neutrino detections. Through his collaboration with researchers worldwide Dr Liu hopes to contribute to our continuous efforts to probe the unknowns of the elusive nature and the vast universe.

<>Deploy a 10 kg prototype detector at the SNS for both dark matter and neutrino physics. 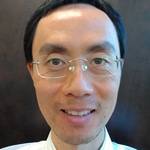 Dr Jing Liu is an Assistant Professor at the University of South Dakota, developing novel particle and radiation detectors searching for rare physics processes beyond the scope of the Standard Model of particle physics. He studied neutrinos at the Max-Planck-Institut fuer Physik, Munich, and dark matter at the Kavli IPMU, Tokyo.