Earth & Environment
Tornadoes happen all over the world, despite being most commonly associated with central USA. When a tornado strikes a city, it can be devastating to both infrastructure and lives. As infrequent as tornadoes may seem in Europe, it is important for their risk to be modelled, so we can prepare for the worst. Dr Juergen Grieser and Dr Phil Haines from Risk Management Solutions (RMS) in London have analysed various methods for tornado mapping, with the hope of combining them to make the most accurate European tornado risk model to date.

If you’re based in Europe, a tornado is something you will likely never have to experience. This mindset means that establishing precautionary procedures and building enhancements against tornadoes is rarely on any European agenda. However, tornadoes do occur in Europe, and have been known to cause severe damage there. To date, there has been a severe lack of tornado research in Europe, with just a few studies covering only a handful of countries.

A more in-depth analysis of tornado likelihood in Europe is required in order to map frequent tornado hotspots and advise governments where to initiate precautionary tornado defence schemes. Dr Juergen Grieser and Dr Phil Haines from Risk Management Solutions (RMS) in London are drawing upon a variety of historic observational and reanalysis data to create a more concise and statistically sound mapping of tornado likelihood across Europe – a comprehensive tornado climatology.

A history of Europe and tornadoes
For context, it’s important to understand where Europe stands surrounding the history of both tornadoes and their scientific analysis.

The last time London was significantly damaged was in 1091, when around 600 houses were destroyed. In France, a tornado hit Paris in 1890, and 70-200 people were killed by a tornado which hit Monville in 1845. These are just some examples of tornado outbreaks in Europe. Despite building improvements, all these urban centres have become more densely populated and potential cost of damage has dramatically increased. If a tornado were to hit a city today, there is a high risk of loss of life – this alone should provide enough reason to increase European tornado precautions.

However, because tornadoes are relatively rare, and the historical record of their occurrence is incomplete, it is difficult to tell whether a difference in activity between cities represents an actual difference in the underlying risk, or whether it is just the result of a difference in reporting and/or luck.

Historically, simple analyses have been conducted for individual countries. Although useful, these recordings vary remarkably in their methods, and suffer from population bias. In effect, countries with lower and less evenly distributed populations will be able to see, and record, fewer tornado events. These recordings are combined in only one European-wide study to date (Groenemeijer and Kühne, 2014).

Mapping by observation
There are a few ways to predict tornado threat, each with benefits and drawbacks. The first is the most obvious technique, using recorded sightings. One way of visualising this is using kernel smoothing. This technique generates a smooth curve which averages all neighbouring data points; it can be imagined similar to a heat map.

Dr Grieser and Dr Haines took information from the European Severe Weather Database (ESWD) to produce several of these maps. Since the ESWD was only established in 2002, the number of tornado reports prior to this was much lower, and poorly classified. Tornadoes are measured by the Fujita scale, F0-F5, with F5 being the most devastating.

The resulting map (see figure 1, upper panel) shows that observed hotspots for tornadoes in Europe appear over Germany, Belgium, Netherlands, southern England, north Italy, the Balearic Islands, Greece, and south Turkey. However, the map would look very different if tornadoes where an intensity rating was not recorded, and those that appeared exclusively over water (called waterspouts) were discounted. Also, different observation periods would lead to different results. 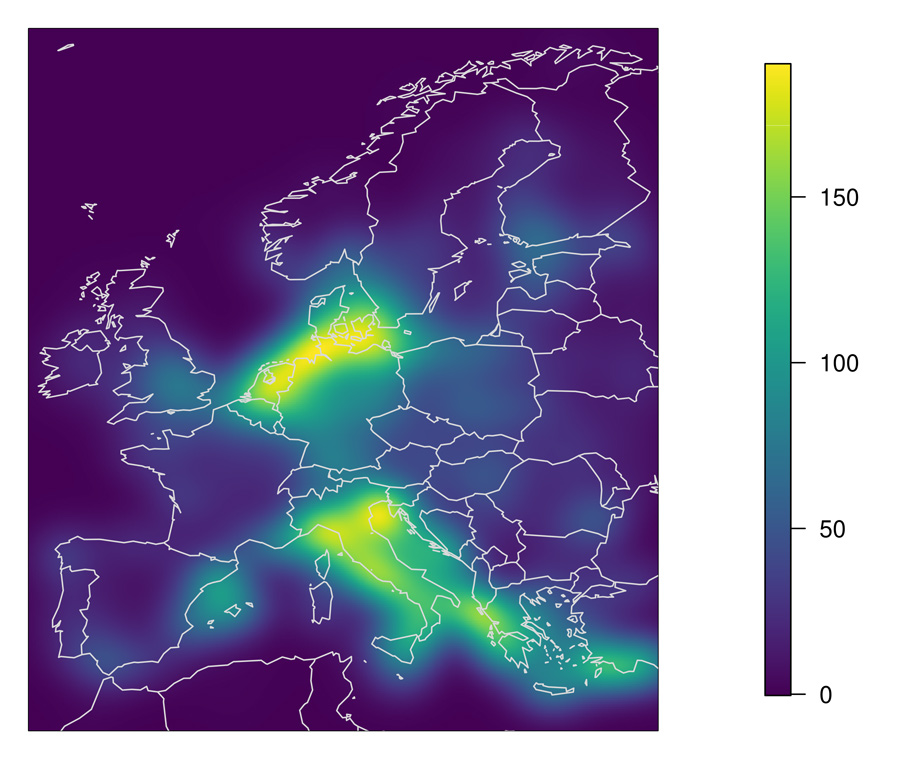 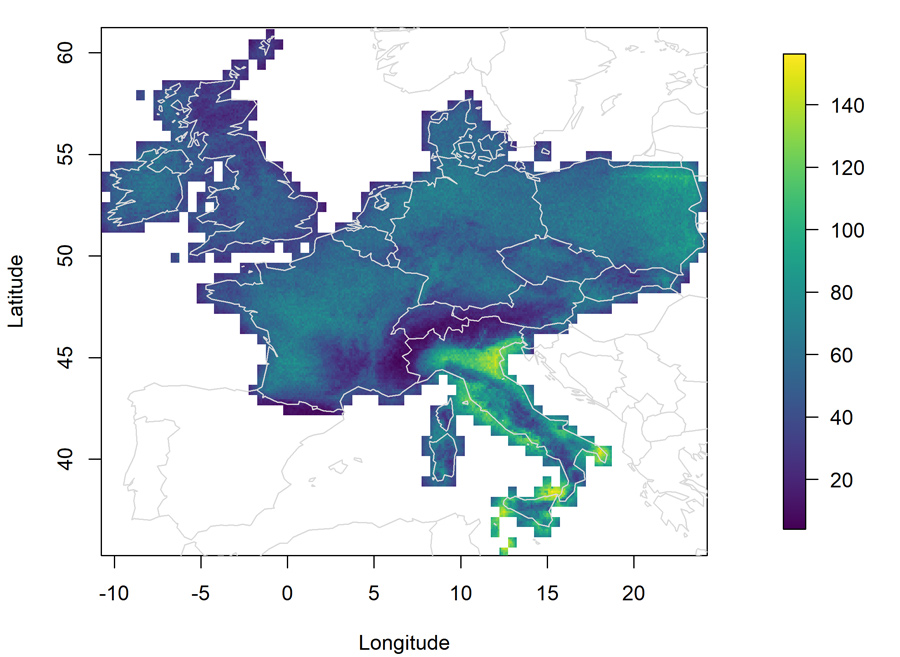 Fig. 1: Expected number of tornadoes occurring in 100 years per 10,000km2 in Europe. The upper panel shows the spatial distribution from kernel smoothing of observed tornadoes from 2005 to 2019 while the lower panel shows the results of the work described here.

A drawback of kernel smoothing is that the smoothing can obscure small-scale features. For example, when smoothing out points across a country like Italy with frequent tornadoes down both coasts, there is a risk that the kernel curves for these two hotspots overlap, causing a high tornado risk to be incorrectly assigned to the mountains in between. The observational data also relies heavily on population density, and the ability of individuals to rate tornado intensity, which can be difficult if no damage is caused (frequent in Europe).

Mapping with climate data
A somewhat more complex method is mapping through reanalysis data, which is historic climate data that has been processed and ‘rebuilt’ using today’s scientific models.

CAPE (convective available potential energy) is one of many important ingredients for ‘tornado weather’. By looking at, for example, spots where CAPE is severe, it is possible to start highlighting high-risk areas. However, CAPE is just one ingredient of many, and it is not totally clear which are the most important as they are all heavily intertwined.

To resolve this, Dr Grieser and Dr Haines compared various risk-maps produced by combinations of these ingredients against the observational data. This allowed them to understand which meteorological ingredients were the most tightly linked to actual tornado events.

They found that CAPE alone was not as tightly coupled with tornadoes as other studies described. In fact, it was CAPE below a particular height that mattered most. The interaction of CAPE with wind shear was also found to be important, reinforcing the results of previous studies, many of which were focused on the USA. The scientists did, however, manage to pin down important meteorological characteristics that well matched the observational data. The only issue here is that the quality of the maps produced depends on the reliability of the reanalysis data used to rebuild them.

Mapping with mountains
If you’ve seen tornadoes in pop culture, or even in real life, there’s a high chance it was on flat land, such as that found in central USA. Previous studies have shown that land topography, also known as orography, has an effect on tornado occurrence.

This orography can be measured by a combination of elevation, slope, and land roughness. For each tornado observation made, the orographic data was extracted for that location. That information can be run through statistical models to map the expected chance of a tornado based purely on each orographic variable. In Europe, where elevation, slope, and land roughness are all heavily linked, all three produced similar maps.

While the results did line up quite well with pure tornado observations, this approach on its own completely ignores climatic conditions, which we know are important.

It was deduced that there would be on average around 180 tornadoes across Europe per year.

Combining the maps
The final step was to take the above methods, and statistically combine them to produce a map that represented tornado risk accurately across Europe. Firstly, all reported tornadoes (excluding waterspouts) were counted, and the issue of population bias was addressed. To do this, each country’s reports were standardised against the ‘most representative country’, which was deduced to be Germany due to its good recordings, large population density, and large area. It was deduced that there would be on average around 180 tornadoes across Europe per year.

The Climate Forecast System (CFS) reanalysis data was coupled to the observational data through logistic regression. This gave a likelihood of tornado per day, for each 0.5° grid cell across Europe. But the reanalysis data is not a perfect representation of reality. By taking another reanalyses set (ERA-Interim), the data between the two sets was compared. Any radical differences in the datasets were dampened using a ‘Gaussian bell’.

Values between neighbouring cells were also smoothed, and then orographic data was applied across the map. This data refined each 0.5° grid cell down to many 0.1° cells, giving each new 0.1° cell an independent value. This produced the final climatology depicted in the lower panel of figure 1.

Using the climatology
The climatology generated removes many issues with previous tornado mapping methods across Europe. Harsh distinctions between countries have been standardised and smoothed. The resolution has been dramatically increased through the use of orographic data, for example exposing the Apennine mountains as a low-risk area. Population biases for observed tornado events have been standardised and coupled to reanalysis data.

A tornado climatology is just one component of a catastrophe model of tornado risk. A full model needs to incorporate information about the size of individual tornado footprints in order to calculate the local hit rate. It also requires assessments of the vulnerability of the subjects (buildings, land, and people) at risk in order to determine the damage produced given that a location is hit. The tornado climatology developed in this study forms a key part of a model of European severe convective storms created by RMS. This catastrophe model allows users, often companies in the insurance industry, to quantify their exposure to severe weather events.

To date, this is the best-known tornado climatology for Europe. As years go by, manual observations will increase and improve. Real-time weather data will feed into the models which will improve their refinement and accuracy.

Weather is a constant feature in our lives, and meteorology provides us with the tools to understand it. Few weather phenomena are more dramatic than thunderstorms and the potentially devastating tornadoes that they can spawn. The better we understand the risk of tornadoes, and how this risk varies spatially, the better prepared we will be.

Building a climatology for tornadoes across Europe was last modified: May 21st, 2021

Juergen Grieser studied Meteorology in Frankfurt am Main (Germany) where he got his PhD. He worked two years for the Food and Agriculture Organization (FAO) of the U.N. Since 2007 he is with Risk Management Solutions. As a senior director he now leads the Severe Weather group within Model Development. 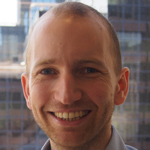 Phil Haines is a Principal Modeller at RMS where he has worked for the last 7 years. Prior to that he specialised in Fluid Mechanics, obtaining a PhD from the University of Manchester and undertaking postdoctoral research in Australia and the UK.

The work was done within Risk Management Solutions (RMS Ltd.)