Biology
Microscopic and enigmatic, the tardigrades are little known to science. However, their remarkable ability to enter suspended animation and withstand extreme conditions may support important medical advances. Prof Carl Johansson of Fresno City College, California, and Dr Lynn Kimsey of the Bohart Museum at UC Davis are documenting the amazing diversity of these secretive animals, and at the same time training students from deprived areas to become expert biologists. Together, they have digitised over 40,000 tardigrade specimens, bringing the mysterious ‘water bears’ into the limelight.

As we hasten to document the Earth’s species before human activities extinguish them for good, our biggest challenge lies in those that are too small to be seen with the naked eye, and the microscopic tardigrades (or, more endearingly, ‘water bears’ or ‘moss piglets’) are a perfect example. It is rapidly becoming apparent that all species, as well as their intrinsic right to survive, may provide us with vital ecosystem services or economic uses. Yet we can neither use nor protect species if we cannot identify or locate them. Thus, using modern digital techniques, Prof Johansson is among those seeking to transform our knowledge of the tardigrades.

Enter the water bears
An ornithologist by training, Johansson challenged himself to study the tardigrades precisely because they were so little known. First discovered in the nineteenth century by German pastor Johann Goeze, an estimated 1,150 species of this unique invertebrate group are now known to science, with more being added every year. However, they remained under-researched until their remarkable properties became apparent.

The water bears live up to their nickname, with short, plump, cylindrical bodies usually less than a millimetre long, and eight legs each ending in multiple claws. Found on every continent, in environments ranging from damp moss to sand dunes or the ocean depths, terrestrial species have the ability to enter a suspended animation known as ‘cryptobiosis,’. This enables the water bears to survive extreme conditions including temperatures from close to absolute zero to over 150 degrees centigrade, immense pressures, almost complete vacuums, and ionising radiation strong enough to kill a human several times over.

Dr Johansson’s students are provided with training which enables them to graduate from Fresno College with a sound knowledge of research, database management and digital imaging

During cryptobiosis, a water bear’s body goes through extraordinary changes: its head and legs retract, and it shrivels into what looks like a tiny raisin, known as a ‘tun’. Its metabolism slows dramatically, it loses 97% of its body fluid, and stops feeding, moving and growing, yet its cells remain perfectly intact. When conditions become more habitable, sometimes years later; in one reported case it was 125 years later, the animals reanimate with the simple reintroduction of water into their habitat. Within minutes or hours of rehydration, the tardigrade will leave the ‘tun’ stage and simply pick up life where they left off.

Suspended animation
The cryptobiotic abilities of the water bears are now targets of research that may prolong the life of human organs donated for transplantation, or help preserve live vaccines being transported to areas without refrigeration. The tardigrades’ capacity to resist or repair DNA damage under intensely mutagenic conditions also has fascinating potential applications. And the list goes on. But the foundation of all tardigrade research rests on our ability to find and identify them, and this requires specimens.

Properly preserved, catalogued and curated, zoological specimens are a mine of information, both in the organisms themselves and the associated ‘label data’ (notes on where and when the animal was collected, what it looked like when alive, and so on). Sadly, many specimens preserved using old techniques and materials are now rapidly degrading, becoming useless for scientific study. Because the name of each species is usually linked to one of the oldest specimens collected, many of these designated ‘type’ specimens are particularly at risk. Thus, it is crucial to preserve both the specimens and their associated data as best we can.

One of the best ways to do this is with high quality digital photographs, alongside digitised label data. With a grant from the US National Science Foundation (NSF), Prof Johansson, Dr Kimsey and their students set about the mammoth task of digitising North America’s largest collection of tardigrade specimens – 26,800 specimens held at the Bohart Museum of Entomology in Davis, CA. Nothing if not ambitious, they then added 17,000 specimens collected by Fresno College as part of an earlier NSF grant, making a total of almost 44,000 permanent water bear records, associated with an incredible 120,000 digital images of the beasts. Alongside the digitisation, Dr Kimsey’s team developed a new method to recover and remount the most important specimens in their collection, which will hopefully now preserve them permanently.

But even the best digital records are useless if they remain isolated in individual museums where they cannot be compared. As Prof Johansson believes, data is only valuable if it can be accessed freely and easily by anyone, anywhere on the planet. For this reason, many natural history museums are now pushing to share their data in online databases. However, standardised databases require standardised data. Because museums around the world evolved in relative isolation until recently, each has their own specimen cataloguing system, incompatible with others, and that means investing a huge amount of time, money and energy re-cataloguing specimens in a universal framework. Fortunately for the water bears, Johansson and Kimsey’s students have provided that energy, resulting in a complete specimen collection now online, searchable and freely accessible in the database iDigBio.

There is a real sense of community surrounding the project, everyone involved has strived to make the project a success

Inspiring a community
One of the greatest beneficiaries of this project is not tardigrade taxonomy at all, but the community of Fresno and beyond. California’s oldest community college, Fresno prides itself on giving economically and/or culturally challenged students a chance: many are the first in their family to attend college, ninety percent receive financial aid, the majority are from minority groups, and most have no scientific background. Yet Johansson calls them to work on a top-level NSF-funded project, receive sound training in research methods, database management and digital imaging, and even publish peer reviewed papers naming new species; not many undergraduates can claim that! The students work with top scientists, receiving genetic support from Byron Adams at Brigham Young University, databasing expertise from Ed Gilbert of Symbiota (the software that supports iDigBio), and the immense tardigrade knowledge of Dr William Miller at Baker University, Kansas.

And their success is phenomenal: compared to an average graduation rate of just 30%, Johansson’s is closer to 100%. Youngsters who once aspired to work in fashion, media or finance are now inspired to pursue advanced degrees in research biology. What’s more, they can be proud of their part in bringing knowledge of the water bears to researchers and enthusiasts across the world. The full benefits of this level of accessibility, to biodiversity conservation, medical research and human health, remain to be seen. But one thing is certain: this pioneering project will ensure the water bears are no longer overlooked.

What attracted you to study such an obscure group as the tardigrades?
<>When I became eligible to apply for a sabbatical, I asked myself: “What do I know absolutely nothing about?” Tardigrades were an answer to that question, and they truly intrigued me, so I wrote an application aimed at researching tardigrades of California. That opened up Pandora’s box for me – in a very good way!

How might research into the tardigrades make a difference to human health?
<>Based on John Crow’s pioneering work in the 1970’s, clinical trials are currently examining the effectiveness of “Dried Blood’ preserved with Trehalose – a sugar used by tardigrades in their process of cryptobiosis, which plays a huge role in protecting cells from damage caused by dehydration. Essentially a soldier or other person could carry small packets of their blood as a dried powder and, if needed, rapidly rehydrate their dried blood to give them matching blood available – anywhere, anytime.

The recently discovered DNA repair and protection mechanisms that tardigrades seem to excel at, are also obviously hugely important. Not only that, but the newly uncovered glass proteins and Trehalose will be key in extending the shelf life of organs or tissues – facilitating a much higher transplant rate.

I am also very interested in pursuing the idea that wind born Tardigrades could be vectors for the spread of disease globally. There is currently some poorly known research into this area that indicates there could be an issue.

How important is it that scientific data is freely accessible to all?
<>If funding is from a public source or sources, it should be mandatory that those findings are released in a timely manner. Many scientists believe that they need to hold their research close to their chest to stop someone else from “scooping them”, publishing their work before they do.

I personally find that to be a totally arrogant approach. If your findings are important, you need to make them available as soon as possible. There are probably hundreds of thousands of files and computer hard drives loaded with what might be very important data that end up never being released because the researcher retired, died, lost interest, or lost funding.

What advice would you give to students who want to pursue a career in scientific research but feel they are not able to?
<>If it is truly your passion, it is the greatest career you can ever imagine. If, however, you think that it could be your pathway to fame, wealth or stardom, don’t waste your time!

What does the future hold for this project?
<>We have now finished the cataloguing and digitisation of the collection. You can visit IDigBio to see our results. Currently we have students working on writing several new species descriptions, based on slides found in the database. We also have students writing up the re-mounting methodology they have now perfected.

Capturing images and data before the slides degrade into uselessness was last modified: July 10th, 2018 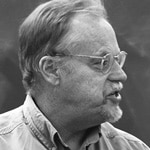 Carl Johansson is a Professor of Biology at Fresno City College in Fresno, California. He trained as a classical ornithologist and ecologist at BYU, previously developing nesting prediction models for the northern goshawk, and radar tracking systems for birds and bats. He is now studying the toughest living organisms on Earth, the tardigrades.

Carl Johansson studies the tardigrades (Tardigrada, or the ‘water bears’) and is offering the opportunity for Fresno City College students to join him in his exciting research on this intractable group of organisms. The aim is not only to find out more about these little-known species and their relevance to the human population, but to also engage students’ interest in and passion for science.