All organisms interact with and respond to their internal and external environmental conditions. Acting on these responses requires a language comprised of cellular words which interpret and relay information within the organism. One category of words, or signalling molecules, are the myo-inositol phosphates (InsPs) which have been implicated in a variety of processes within the cell. And much like words, these molecules vary in the number and position of letters (in this case phosphates) with each combination meaning different things in eukaryotic cellular communication.

One particular group of these signalling molecules are characterised by diphosphate (PP) or triphosphate (PPP) chains. These inositol pyrophosphates (PPx-InsPs) have been implicated in cellular metabolic processes given the similarity of its structure to a molecule called adenosine triphosphate (ATP), sometimes referred to as the energy currency of cells. Dr Imara Perera, Dr Glenda Gillaspy and colleagues: Dr Joel Ducoste and Dr Cranos Williams are interested in the function of this group of signalling molecules in eukaryotic organisms such as plants.

Inositol hexakisphosphate – a precursor to inositol pyrophosphates
Inositol phosphates comprise an inositol ring and varying numbers and positions of phosphates attached to it, each communicating unique messages in the cell. A fully phosphorylated form is inositol hexakisphosphate (InsP6), a potential signalling molecule and a precursor to the aforementioned group of inositol phostphates PPx-InsPs that Perera and colleagues are studying.

These inositol pyrophosphates (PPx-InsPs) have been implicated in cellular metabolic processes given the similarity of its structure to a molecule called adenosine triphosphate (ATP), sometimes referred to as the energy currency of cells

Inositol hexakisphosphate acts as a storage compound of inositol, phosphorus and minerals and is found in large quantities in seeds. This large quantity of InsP6 is later hydrolysed during germination and has led researchers to believe that as a PPx-InsPs precursor, it is likely that plants also synthesise this unique group of signalling molecules. However, very little attention has been paid to the presence of PPx-InsPs in plants which is why Dr Imera Perera and colleagues have stepped in. This coupled with PPx-InsPs role in ATP homeostasis make them an interesting group of signalling molecules to study.

Inositol pyrophosphate synthesis and functionality
One avenue of research is understanding the enzymes which synthesise PPx-InsPs molecules. In fact, synthesis of InsPs and PPx-InsPs molecules is carried out by two evolutionary-conserved InsPs kinases. These kinases catalyse the addition of pyrophosphates at distinct positions on the inositol ring. The first class are delineated IP6Ks (but KCS1 in yeast and absent in plants) and the second class are VIPs (or PPIP5K in humans) which is conserved across eukaryotes. It is these InsPs kinases which phosphorylate InsP6 produces derivatives such as inositol pyrophosphates InsP7 and InsP8. Previous research has established InsP7 and InsP8 as important molecules in metabolic programming as their energy-rich pyrophosphate moieties make them comparable to ATP. However, they have not been widely studied in plants.

Using a variety of techniques, Dr Perera and her colleagues identified the presence of these derivatives in higher plant tissue. This was further supported by the fact that Arabidopsis and maize seeds with a mutation in the InsP6 transporter protein produced plants with elevated levels of InsP7 and InsP8. One hypothesis for this is that a block in transportation of InsP6 provides a larger pool for VIP kinases to access and thus produce InsP7 and InsP8. They also identified two similar Arabidopsis genes, AtVIP1 and AtVIP2 which functioned to restore InsP7 synthesis in yeast, clearly demonstrating that plants can synthesis pyrophosphates. What’s more is researchers found that AtVIP1 and AtVIP2 were differentially expressed in different plant tissue, alluding to distinct functional roles.

But what function do inositol pyrophosphates play in plant signalling pathways and processes? Drs Perera, Gillaspy, Ducoste and Williams are exploring functions of PPx-InsPs, drawing from a variety of studies. New work by others has linked PPX-InsPs to phosphate sensing (Wild et al., 2017; Puga et al., 2017; Jung et al., 2018), a key process that allows plants to regulate growth in sync with phosphate, one of the most important nutrients in the soil environment. Previous studies have found that InsP7 levels change in some non-plant organisms in response to limiting phosphate (Azevedo and Saiardi 2016). PPx-InsPs have also been implicated in Jasmonic acid signalling and plant defense responses (Laha et al., 2015). As mentioned above, the similarity of PPx-InsPs to the energy currency molecule ATP implies that they are involved in processes involving energy homeostasis, a crucial function in all organisms. 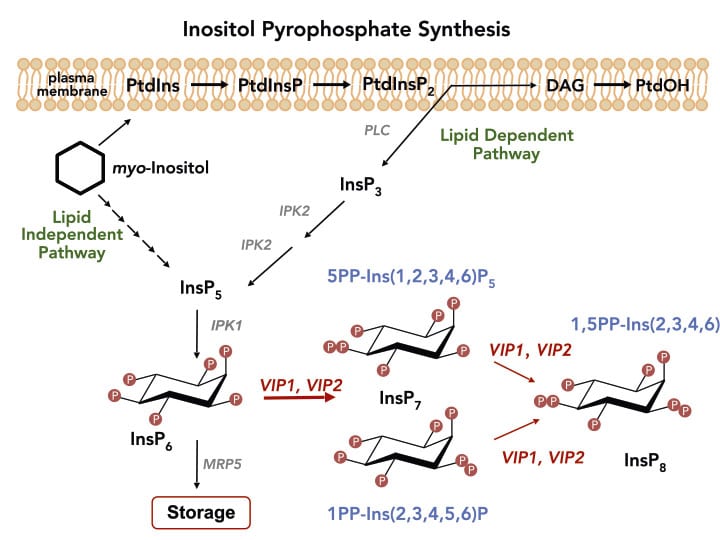 Further avenues
However, there are still unanswered and unexplored trajectories in this line of research. Genetics and biochemical approaches aside, Dr Perera and colleagues hope to use computational methods, such as kinetic modelling, to predict how InsP synthesis is modulated and identify key regulatory steps in the pathway. This system is based off differential equations which represent major reactions involved in the PPx-InsP pathway. By simulating these reactions, they can compare these to observations seen in mutants where loss of function occurs. By utilising this methodology, researchers can understand the potential behaviour of this pathway as well as key components in the signalling pathway.

Given the genetic conservation of proteins implicated in the InsPs signalling pathway, further research by Dr Perera and her colleagues will allow these findings to form the basis of insights into other eukaryotes, such as humans. In other words, understanding how InsPs play a role in signalling in plants, may be used to understand this pathway in other multicellular organisms.

How reliable are comparisons to similar pathways in eukaryotic organisms?
<>Although pathways are conserved between eukaryotic organisms, there are significant changes between plants and animals, in specific components of the InsP pathway, as well as how they are generated and regulated. For example, one key difference in inositol pyrophosphate synthesis is that plants only contain the VIP class of enzymes whereas animals and yeast have two different types of enzymes (IP6K and VIPs). Additionally, InsP6 is highly abundant and the major phosphate store in plant seeds, and no analogous situation occurs in most other eukaryotes.

Why can’t some animals digest InsP6 in seeds? And what are the repercussions of phosphate pollution?
<>The phosphate bound up in the InsP6 molecule is most easily liberated by specific enzymes present in plants, ruminant animals, and microbes in our environment. Non-ruminant animals do not possess these enzymes in their gut, and thus they cannot breakdown InsP6. As a result, undigested InsP6 is excreted into the environment. This along with excess unused phosphate from fertiliser ends up in agricultural run-off and causes pollution of fresh water sources. Experimental approaches to reclaim or phosphate from run-off are a focus of several interdisciplinary research teams.

What is kinetic modelling and how can it reveal key components in the PPx-InsP signalling pathways?
<>Kinetic models of signalling networks are a mechanistic description of the key reactions that take place within the cell. Scientists can build kinetic models utilising known biochemical and biological data, and by estimating key parameters. Our initial PPx-InsP model uses biochemical data from a variety of eukaryotic enzymes and makes use of observed changes in PPx-InsPs in plant mutants. By fitting the observed data to the model, we can predict novel regulatory components.

How did you create InsP7 mutants in yeast?
<>We did not create these mutants but were able to make use of mutants created by other researchers in the field. The VIP mutants used in our study were obtained from Dr John York of Vanderbilt University. The York laboratory created these mutants by inserting DNA to disrupt key genes in PPx-InsP synthesis and degradation pathways. We introduced the plant VIP genes into these yeast mutants to demonstrate that biochemical complementation takes place. Showing that the plant VIP genes restore InsP7 synthesis in the yeast mutants indicates that the plant VIP genes function in a similar manner as do the yeast VIP genes.

Communicating the language of plants through inositol phosphates was last modified: June 25th, 2018 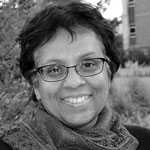 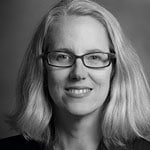 Dr Perera is a Research Professor in the Department of Plant and Microbial Biology at North Carolina State University. She received her PhD in Plant Biology from the University of Illinois at Urbana-Champaign.
Dr Gillaspy is Professor and Head of Biochemistry at Virginia Tech. Glenda and Imara share common interests and a productive collaboration on inositol phosphate signaling in plants.

Dr Perera and her colleagues’ aim with this project is to understand how inositol phosphates are used to sense the energy and nutrient status of plant cells, and how they signal this status so that the plant can use this information.