Informatics & Technology
Unmanned Aerial Vehicles (UAVs) look set to play an increasingly important part in our everyday lives in the coming years, but the technology faces a unique set of challenges before it can become fully integrated into our infrastructures. In her research, Dr Yan Wan at the University of Texas in Arlington considers how these challenges can be addressed; paying particular attention to how networks of UAVs can carry out tasks together. The insights gathered by her team already promise to transform the ways in which UAVs operate.

In recent years, UAVs have gone from being little more than toys for taking unique holiday photos, to a technology which is rapidly becoming an important part of our society. Now, they look set to become key elements of an emerging group of technologies named ‘cyber-physical systems,’ whose behaviours are based around the interaction between the physical world and computer algorithms. Leading research into UAVs is Dr Yan Wan, Associate Professor of Electrical Engineering at the University of Texas at Arlington. As Dr Wan explains, many researchers predict that with these advances UAVs could soon be crucial components of the ‘internet of things’ (IOT)—which links many of the systems we use in our everyday lives into an extensive, intelligent network of devices. 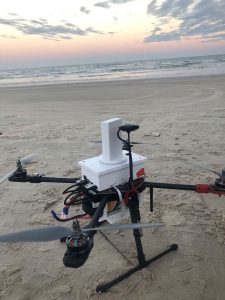 Dr Wan summarises, “Examples of civilian applications include unmanned aerial taxis, emergency response, traffic surveillance, precision agriculture, cargo transport, personal outdoor assistance, sports coverage, land survey, and infrastructure health monitoring.” Achieving such a high degree of integration is far from simple. In her research, Dr Wan aims to confront the challenges which arise with the burgeoning technology; particularly, in regard to how systems of many UAVs can be used to complete the tasks we assign to them.

The challenge of multiple-UAV networks
So far, UAVs have largely been used to carry out tasks by themselves. However, recent research has shown that with the right controls in place, the vehicles have strength in numbers when it comes to carrying out more complex tasks. “Multiple UAVs can coordinate and achieve highly complicated missions more effectively,” says Dr Wan. “This requires airborne networking, which utilises UAV-UAV communication to share information, maintain safe manoeuvring, and coordinate to achieve time-critical missions.” 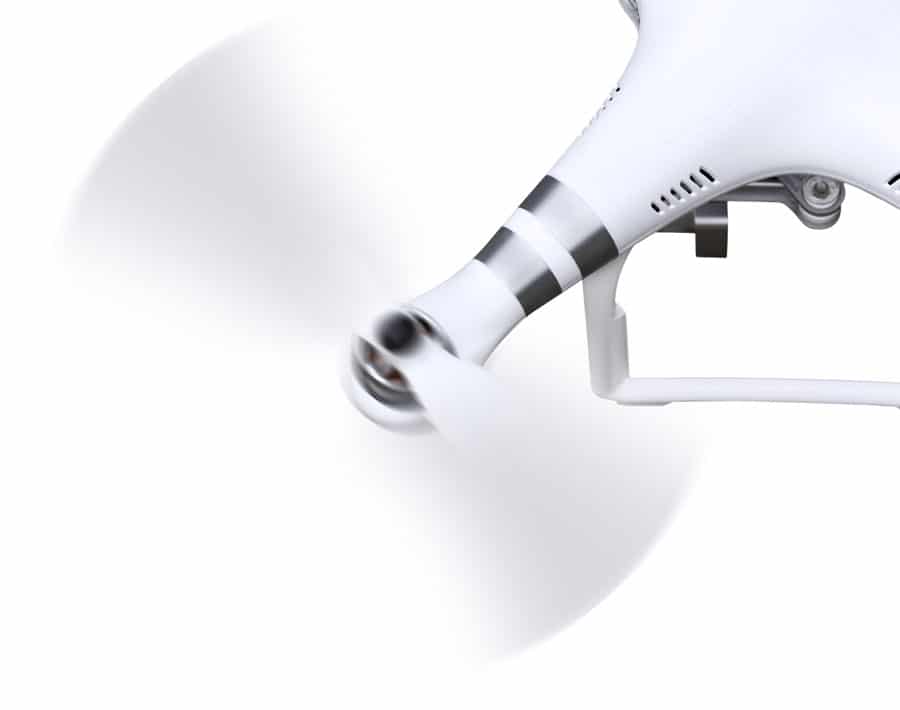 Despite such numerous advantages, a network of devices which constantly talk to each other to exchange information, all while moving around relative to each other in continually changing environments, would be extremely difficult to realise. “Airborne networking, unlike the networking of fixed sensors, mobile devices, and slow-moving vehicles, is very challenging because of the high mobility, stringent safety requirements, and uncertain airspace environment,” Dr Wan continues. To combat these issues, Dr Wan and her team approach the problem from a new angle—considering how certain aspects of UAV networks—previously seen as hinderances, could be used to their advantage.

Previously, researchers have viewed the communication between UAVs in a network, and their mobility within the network, as being at odds with each other. The more the vehicles move around relative to each other, they claim the harder it must be for them to stay in touch. In contrast, Dr Wan has brought together a set of computational techniques which allow UAV networks to exploit these constraints and uncertainties; using them to gather information about their present situations. “This project uses an innovative co-design approach that exploits the mutual benefits of networking and decentralised mobility control in an uncertain environment,” she says. Three distinct results highlight the successes of this approach—each addressing a different aspect of the multiple-UAV problem.

Changing direction in uncertain environments
The first of these developments is called a ‘random mobility modelling framework,’ which takes account how individual UAVs must adopt highly variable paths as they carry out their missions. While previous studies have developed random mobility models for ground vehicles and mobile users, these models do not capture UAV mobility physics, such as three-dimensional movement and the smoothness of trajectories.

Dr Wan and colleagues used an updated approach to consider how airborne objects are influenced over time as they move along three-dimensional paths. In particular, they have considered how these trajectories must be continually adapted due to the random behaviours of their surroundings. Such behaviour is directly comparable to real-life scenarios, where UAVs are constantly buffeted by their varying missions and air movements such as vertical thermals, and intermittent gusts of wind. 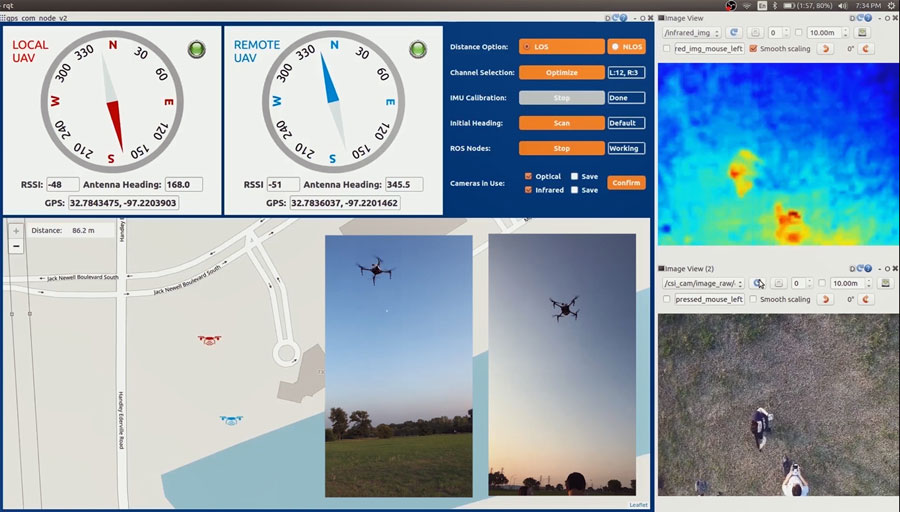 In particular, these studies allowed the researchers to realistically simulate how UAVs will change direction in these uncertain environments. Already, the insights they have gathered so far have had a significant impact on the field of UAV design. “The smooth turn framework that we developed has been widely adopted for UAV network design and evaluation studies,” Dr Wan explains. By simulating the behaviours of random systems in this way, researchers can create UAV networks which directly adapt their dynamics to work within uncertain environments, instead of fighting against them.

Breaking the curse of dimensionality
Secondly, Dr Wan and her colleagues dealt with a long-standing puzzle facing many different types of uncertain complex networks: the ‘curse of dimensionality.’ The problem describes the exponential growth of computation when a system decision involves the evaluation of high-dimensional uncertainties. To solve the problem, the researchers developed a technique named the ‘Multivariable Probabilistic Collocation Method’ (M-PCM) — which introduces new computational techniques to randomly sample the properties of high-dimensional systems. When merged with a further technique, named M-PCM ‘orthogonal fractional factorial design,’ the uncertainties surrounding the behaviours of UAV networks in 3D could finally be broken down. 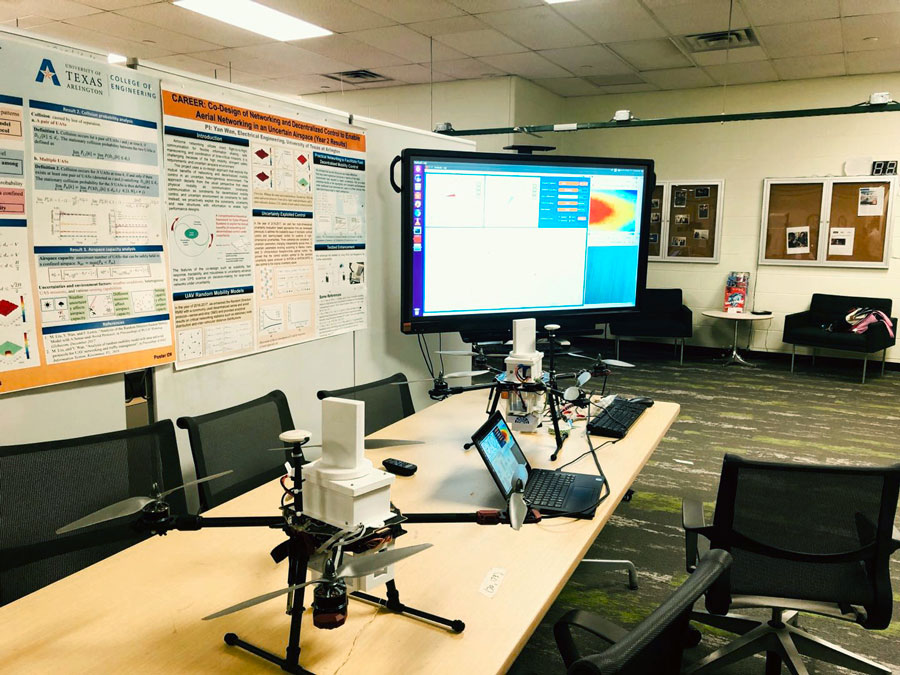 “This solution breaks the curse of dimensionality, and is pivotal to the accuracy and scalability of the optimal control of random systems, reinforcement-learning based control, and dynamic graphical games,” Dr Wan describes. Ultimately, the technique would allow for more effective ways to design and control systems of multiple UAVs, and to assess their performance in real time. Again, this development demonstrates how, rather than being a barrier to effective control, randomness can be exploited to facilitate robust decision in complex networks.

…rather than being a barrier to effective control, randomness can be exploited to facilitate robust decision in complex networks.

Layered formations
Finally, Dr Wan’s team investigated how the effectiveness of communication and data transmission between UAV within a network can vary when the vehicles fly in different formations. Contrary to previous studies, they discovered that UAV networks don’t perform at their best when arranged in egalitarian structures, in which individual UAVs can ultimately have free reign over where they travel within the network. Instead, they can be more easily controlled and managed when the vehicles are arranged in neat layers, stacked on top of each other.

“We examined various network structures and found that the layered structures, which reside between centralised and decentralised structures, are very promising to control networked UAVs,” Dr Wan explains. “If designed properly, such layered structures can significantly reduce throughput while still allowing efficient completion of distributed control tasks.” This insight was the final piece of the puzzle when it came to the effective operation of UAV networks. Together with the other two results of Dr Wan’s most recent studies, the insights have revealed a feasible pathway towards the technology for the first time. 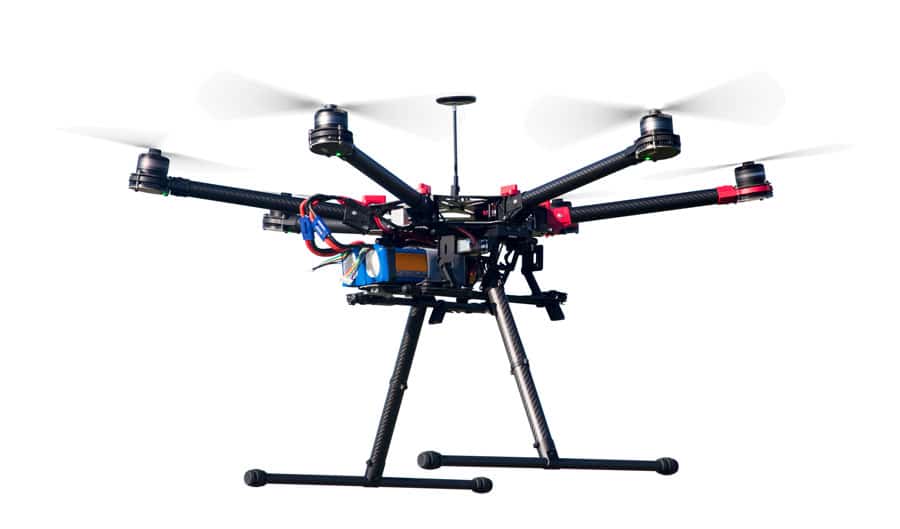 Transforming the capabilities of UAV networks
Where the inevitable uncertain characteristic of random systems have previously hindered communication and mobility in UAV networks, the results of Dr Wan and her colleagues clearly demonstrate how randomness can instead be embraced. When the right precautions are taken, even highly complex aerial networks of UAVs, all talking to each other in real time, would be able to seamlessly interact with their environments. Dr Wan pursued the transfer of the developed technologies to emergency response, where the UAVs set up the on-demand emergency communication service to assist first responders. Dr Wan concludes that her techniques would create an ease of operation which could soon allow for significant new advances in technology as a whole.

“The technological advances developed in this research will contribute to multiple fields, including mobile networking, edge computing, decentralised control, experiment design, and general real-time decision making under uncertainty for cyber-physical systems,” she says. Thanks to Dr Wan and her colleagues, the emerging technology of UAV networks now looks set to enjoy a bright future—with the potential to become an integral part of many of the systems we interact with in our everyday lives.

What is next for your research?
<> We plan to extend our study to explore UAV traffic management, which is concerned with maintaining airspace safety and efficiency for dense operations of UAVs. While communication and coordinated UAV control techniques that we developed are important components of this problem, UAV traffic management covers much boarder, and more challenging and complex problems of multiple scales, such as airspace capacity management, UAV path scheduling, infrastructure support, human systems, contingency management, security, verification, and various operational challenges. Ultimately, we work toward a safe operation of UAVs in a complex urban environment that complements our existing ground traffic systems. 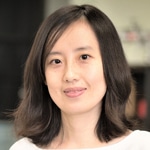 Dr Yan Wan is Associate Professor in the Electrical Engineering Department at the University of Texas at Arlington. She received her Ph.D. in Electrical Engineering from Washington State University in 2009 and postdoctoral training at the University of California, Santa Barbara. Her research has led to over 160 publications and successful technology transfer outcomes. She has been recognised by several prestigious awards, including the NSF CAREER Award, RTCA William E. Jackson Award, U.S. Ignite and GENI demonstration awards, IEEE WCNC and ICCA Best Paper Awards, UNT Early Career Award for Research and Creativity, UTA STARS Award, and Tech Titan of the Future – University Level Award.