Earth & Environment
Ocean currents are a conveyor belt spanning the entire globe; they are transporting minerals, nutrients, organisms and other particles across vast distances. However, the full extent of the roles played by these flows is still poorly understood. Dr Rui Caldeira, Director of the Oceanic Observatory of Madeira in Portugal, and his collaborators Dr Iria Sala, Cláudio Cardoso and Maria João Lima use the latest computer modelling techniques to understand how ocean currents interact with four archipelagos in the northeast Atlantic Ocean. The team’s discoveries are shedding new light on how the region is affected by the growing problem of plastic pollution, and how similar processes are unfolding worldwide.

Ocean currents are a crucial aspect of the environment, taking up two thirds of our planet’s surface. Generated by factors including winds, temperature differences, and the Earth’s spin, they form colossal conveyor belts which encircle the vast regions in between continents, thereby moving minerals, nutrients, sediments, and plankton to new regions across the globe. In turn, currents are the lifeblood of many ecosystems, both marine and land based, and enable the livelihoods of many millions of people. Sadly, however, they have more recently been responsible for driving the spread of discarded plastic, leaving even some of Earth’s remotest ecosystems damaged by pollution.

Despite the relevance of each of these factors, researchers still have a poor understanding of the overall dynamics of ocean currents. In the face of this challenge, the work of oceanographers is crucial to understand the role currents play in sustaining life, and how marine ecosystems are affected by human activity. In their research, Dr Rui Caldeira, Director of the Oceanic Observatory of Madeira in Portugal, and his collaborators Dr Iria Sala, Cláudio Cardoso and Maria João Lima use a branch of physics focused on a Lagrangian approach to describe the characteristics of moving fluid in the oceans. This allows them to describe the motion of individual particles by mapping their positions over time, determined by the current direction and velocity. Yet before reaching these capabilities, the researchers needed to perform an advanced set of mathematical calculations to simulate ocean currents.

Simulating currents
Through a study published in 2013, Dr Caldeira and his colleagues developed a robust method for mapping the paths of currents in the northeast Atlantic Ocean, using a computer model named the ‘Regional Oceanic Modelling System’ (ROMS). Widely used by oceanographers, ROMS enabled the team to apply Lagrangian mechanics to their oceanic flow calculations. This, in turn, allowed them to simulate the transport and dispersion of different clusters of particles over time. To test the reliability of the model’s predictions, they compared their results both with satellite observations of real currents and measurements of floating arrays of sensors (‘drifting buoys’), which can probe currents at varying depths.

The work of oceanographers is crucial to understand the role that ocean currents play in sustaining and moving life ‘around’.

As the team hoped, the dynamics which appeared in their model closely matched the observations and remained consistent with known circulation patterns in the northeast Atlantic. In addition, they verified the consistency of their simulations with the known distributions of several animals, including particular species of fish, lobster, eel, and sea sponge, as well as observations of drifting crude oil from the Prestige oil spill: a catastrophe which occurred off the northwest coast of Spain in 2002. Having clearly proved the reliability of ROMS in recreating the Lagrangian pathways of ocean currents, Dr Caldeira’s team could next apply their techniques to studying currents in a variety of more specific cases.

Sieving for drifting particles
The region of Macaronesia spans a large swathe of the northeast Atlantic Ocean: from the Azores in the north, which lie due west of the Portuguese mainland, to Cabo Verde in the south – a nation off the coast of West Africa. In between lie the archipelagos of Madeira – where Dr Caldeira’s team is based –, considering the Canary archipelago in between. In addition to these four groups of islands are a number of seamount complexes which create shallow regions hundreds of kilometres from land. These shallow structures interact with ocean currents, resulting in the generation of retention and accumulation regions – ‘sieving’ the incoming ocean. As a result, this process favours the settlement of some species, but also of new material, such as litter, continually being delivered to these isolated islands and seamounts, generating unique marine ecosystems.

Oceanographers now have a fairly detailed understanding of the north Atlantic Ocean circulation current system: a looping, clockwise flow which extends all the way to the Caribbean and North America. Yet despite this knowledge, the specific origins of the particles reaching particular islands and seamounts remain much harder to determine. In two further studies, Dr Caldeira’s team explored two particular cases using Lagrangian techniques adapted from their earlier research. In the first study, they examined the origins of particles reaching the Azores, assessing the capability of the islands to capture and retain the incoming material. In the second, they carried out similar studies of two seamount complexes named Great Meteor and Madeira-Tore – each identified as vulnerable, ecologically important areas.

Identifying delivery mechanisms
Through a series of simulations, Dr Caldeira and his colleagues determined that particles reaching the Azores are mainly transported along westward-propagating corridors of swirling eddies. These corridors were likely to have broken off from the Gulf Stream: a part of the north Atlantic circulation current system which delivers warmer water from the Caribbean to Northern Europe. Furthermore, the researchers showed that these currents are stirred up by the islands in characteristic ways. This means that while the ability of the islands to capture particles is directly related to their sizes, the time they retain the particles relates to the depth of the water surrounding them – since currents are slowed down in deeper water.

In their second study, Dr Caldeira’s team again identified corridors of eddies as the main transport particles for particles arriving at the two seamount complexes. This time, however, the corridors branched off from a current flowing southward from the Azores – so that each complex was fed by a different branch of the same current. This observation not only revealed a large-scale mechanism connecting the seamounts – which are hundreds of kilometres apart; it also indicated new mechanisms for connectivity between seamounts within the same complex.

In the Madeira-Tore complex, seamounts are generally smaller, but are more densely packed together. In the team’s simulations, this generated a ‘sticky water’ effect – where currents within the complex became slower compared with those in the surrounding open water. This improved the ability of Madeira-Tore to capture and retain particles. In contrast, the Great Meteor complex contains a lower density of larger seamounts. This generated a ‘seamount effect’ – where particle capture and retention properties are more similar to those found around islands.

Understanding plastic pollution
In their latest research, Dr Caldeira’s team have built on their previous techniques to explore the impact of plastic pollution across all four archipelagos in the wider region of Macaronesia. Combining the latest datasets of ocean currents, wind, and waves using Lagrangian tools, they turned back the clock to track the motions of virtual particles intersecting the islands over a 10-year period; also accounting for the depths of the particles beneath the ocean’s surface. Their simulations revealed that the Gulf Stream was the main pathway for all of the plastic pollution intercepting each of the island groups – although Cabo Verde was less effected.

The simulations clearly highlighted the vulnerability of small islands to human activities across multiple continents.

As expected, particles floating on the ocean’s surface were captured by the islands on far shorter timescales than those submerged at greater depths, mainly because of the exposure of surface particles to the wind. In fact, winds blowing eastwards across the North Atlantic ‘garbage patch’ – a region in the middle of the North Atlantic circulation current system, where plastic tends to accumulate – are the principle mechanism driving the transport of such surface particles to the archipelagos. Particles that are exposed to the wind have the highest probability to ‘exit’ this garbage patch and eventually intersect the archipelagos. Many particles also originated from intensive fishing industries close to all four island groups. In addition, plastic originating from the coasts of North and Central America was a common source of pollution reaching the Azores, Madeira, and the Canary Islands, while particles from the northwest African coast more readily ended up in Cabo Verde. Overall, the simulations clearly highlighted the vulnerability of each group of islands to human activities across multiple continents.

Informing future efforts
Plastic pollution is now growing exponentially across the globe. From 50 million tons in the 1950s, levels of discarded waste grew to over 320 million tons in 2015; with between 4 and 12 million tons now being added each year according to current estimates. All the same, the wider roles which ocean currents play in transporting and dispersing this pollution are still poorly understood, and it is still incredibly difficult for researchers to determine how specific ecosystems will be affected by it.

Although the flows and corridors affecting Macaronesia’s four archipelagos are ultimately just a small part of the global conveyor belt of ocean currents, the region’s problems with plastic pollution are being clearly reflected worldwide. In the face of this mounting crisis, calls are now growing for governments and organisations worldwide to tackle the many issues involved and to mitigate their worst effects. As this happens, the simulations produced by Dr Caldeira’s team and others like them will be crucial in understanding what must be done to protect our oceans, and to ensure a future for the vast array of ecosystems it contains.

The urge to demonstrate the importance of studying the physics of the ocean, in this case focusing on the role that oceanic currents and winds play in the transport of particles around the globe.

How readily could your simulation techniques be applied to other regions affected by plastic pollution?

Depending on the computational resources available, on the dimension of study area, and on the required spatial detail, Lagrangian simulations could be achieved within days.

Conveyor belts of the Atlantic Ocean: Moving particles, organisms and litter around the globe was last modified: June 18th, 2021 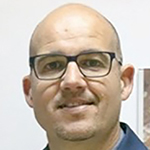 Rui Caldeira completed a PhD from University of California, Los Angeles in 2002. Currently acting as the Director of the Oceanic Observatory of Madeira (OOM), he coordinates a group of 9 researchers focused on the study of the upper-ocean and lower-atmosphere, boundary layer physics. 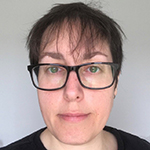 Iria Sala has a PhD in Oceanography from the University of Cádiz. Her research interests are focused on the physical-biological interaction, and how phytoplankton distribution, diversity and productivity is influenced by different hydrodynamic processes. 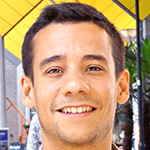 Cláudio Cardoso is conducting a PhD in Oceanography at the Faculty of Science from the University of Lisbon. His research interests are focused on the local and large-scale transport of marine litter affecting oceanic islands and, on the processes, related with the generation and interaction of eddies with oceanic islands. 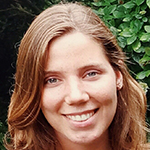 Maria João Lima is finishing a master’s degree in Marine and Coastal Systems at the University of Algarve. Her research interests focus on functional relationships between phytoplankton and multiple environmental drivers, and harmful algal bloom modeling in the context of climate

The researchers study ocean-induced Lagrangian transport and its implications in moving minerals, nutrients, sediments, organisms and other particles (e.g., litter) around the globe.