Engineering & Technology
The key to improving the performance of high-speed electronic circuits is the generation of short electrical pulses with reduced phase noise. Dr Koichi Narahara of the Department of Electrical and Electronic Engineering at Kanagawa Institute of Technology studies electric pulses generated by travelling-wave field-effect transistors. He found that the devices possess unique properties that could provide increased operating frequencies and decreased phase noise when compared to traditional oscillators, rendering them invaluable to modern electronics.

A travelling-wave field-effect transistor (TWFET) is a special type of field-effect transistor (FET) with electrodes employed as transmission lines in addition to its electrical contacts. An FET is a semiconductor device used to amplify or switch electrical signals and power, which has three terminals; the source terminal, where the electrons enter, the drain, through which they leave the channel, and the gate. By applying voltage to the gate, one can control the electrons that travel from the source towards the drain. When a voltage difference is generated between the body and the gate, an electric field is created, which increases the conductivity between the drain and source terminals. A TWFET consists of two transmission lines: one or the other is periodically loaded with current flowing from the gate and drain of a small grounded FET, respectively. Since they were discovered in 1965, TWFETs have been studied for their use in broadband amplification. However, owing to the electromagnetic couplings between transmission lines, no efficient design method has been established for short-channel TWFETs. 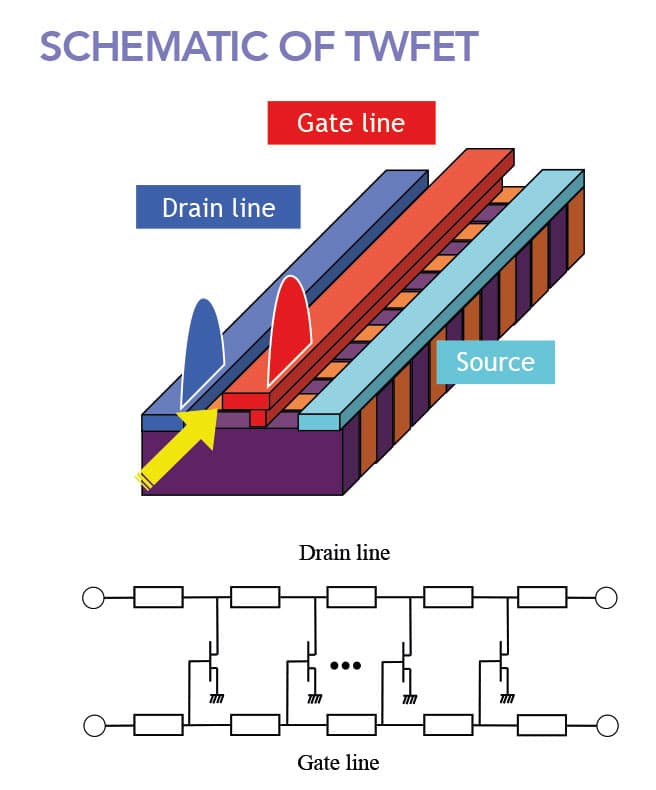 For limiting small signals, the output of any device is assumed to be linearly dependent on the input, meaning that the strength and shape of the electromagnetic wave which is produced will be unchanged. However, this assumption doesn’t hold for many devices, where properties such as resistance, capacitance and inductance are not constant. These devices are known as ‘nonlinear’ devices. Until now the nonlinear properties of TWFETs have been generally neglected.

Dr Narahara studies a method of amplifying short electrical pulses using TWFETs with electromagnetic couplings (where an electromagnetic field in one set of electrical wiring or circuit leads to an electric charge in another) and has devised a way to use their nonlinearity for shaping electromagnetic waves or pulses. These couplings induce two different propagation modes (ways in which pulses travel) in TWFET. He succeeded in confining all the pulse energy into one of the modes and amplified the pulses carried by that mode. As long as a pulse travels in a unique mode, it is free from the distortions caused by the difference between modes.

The shock front operates as an approaching wall to the counter-moving waves, the frequency of reflected wave becomes greater than the incident one through the Doppler effect.

Usually, short-wavelength waves travel slower than long-wavelength waves in TWFET, which causes dispersive distortions to the short and baseband pulses. By introducing nonlinearity, this dispersion can be compensated for. Moreover, a TWFET succeeds in balancing the dissipation and gain. As a result, it supports dissipative solitons. A soliton is a type of wave that maintains its shape as it moves at a constant velocity. In this way, Dr Narahara designed a TWFET that supports short electrical pulses without significant distortions.

The interaction of dissipative solitons has the potential to produce a technological break-through in the phase-noise performance of oscillators. Oscillators are devices that change the direct current obtained from a power supply to alternating current. They are found in many common electrical devices but typically produce high levels of phase noise which can interfere with their functioning. By considering a closed topology, Dr Narahara has created what is essentially a pulse oscillator using TWFETs, which could someday render a valuable scheme for reducing phase noise. 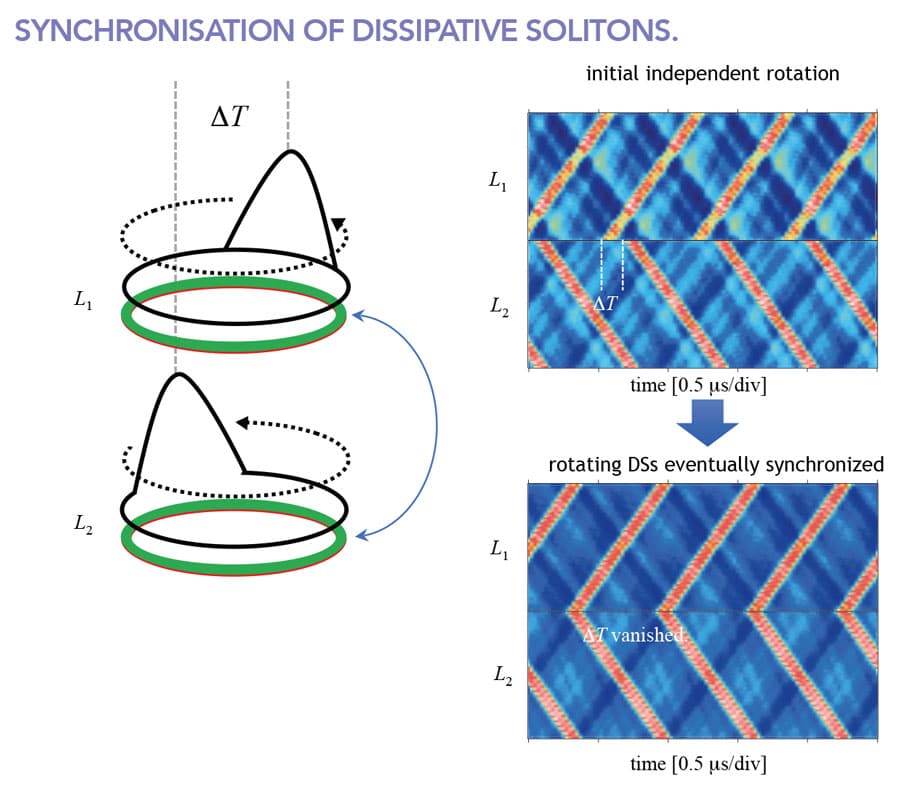 In addition to the development of dissipative solitons, the nonlinearity in TWFETs induces several other wave phenomena usable for generation of high-frequency continuous or pulsed signals. Without nonlinearity, waves are carried by superposed sinusoidal propagation modes, and exponential modes cannot contribute to their propagation. In contrast, a hybridisation of sinusoidal and exponential modes becomes possible in the presence of nonlinearity. Dr Narahara found that the hybrid-mode supports quasi-stable propagation of incident pulses and significantly compresses their widths.

In addition, he found that shockwaves can be excited in TWFETs, which are special in that they can reflect any incoming waves, resulting in an increase of the frequency. In addition, the shockwave in a cavity exhibits interesting self-organisation. By the proper design of the structure and applied voltage, the shockwave reaches the far end and is reflected backwards toward the input. The edge is again reflected at the input to become a stable shock front. Through the repetition of this process, the shock front oscillates in a TWFET cavity. When the input amplitude is increased, two or more oscillating fronts develop autonomously and are mutually synchronised.

These phenomena can be combined with the dynamics of dissipative solitons, leading to sophisticated methods for either multiphase, (de)multiplexed, or phase-locked ultrashort pulse streams. 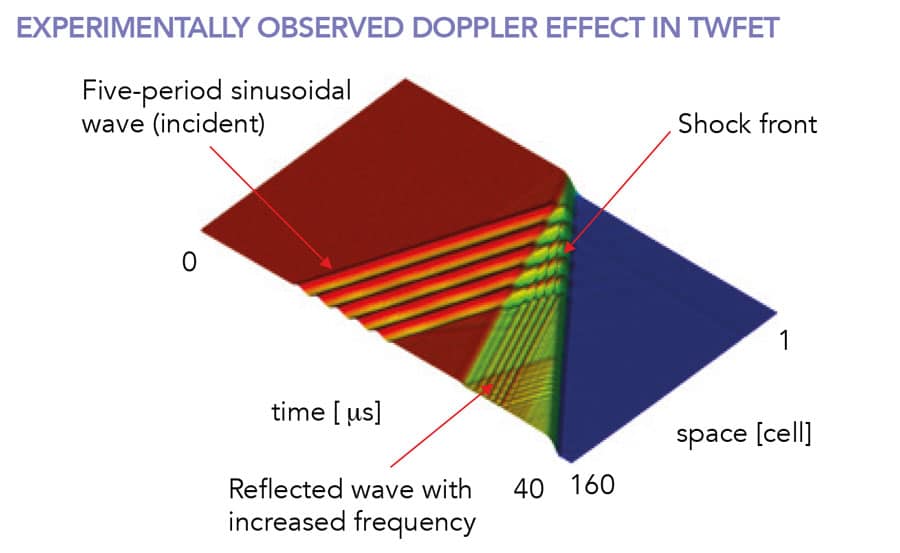 Shockwaves
One of the nonlinear effects in distributed systems is the development of shockwaves. A shockwave is a type of propagating wave that carries energy like an ordinary wave but is characterised by an abrupt, nearly discontinuous, change in pressure, temperature and density of the medium. Shockwaves have been observed in transmission lines that are loaded along their length with either the voltage-dependent capacitors known as varactors. 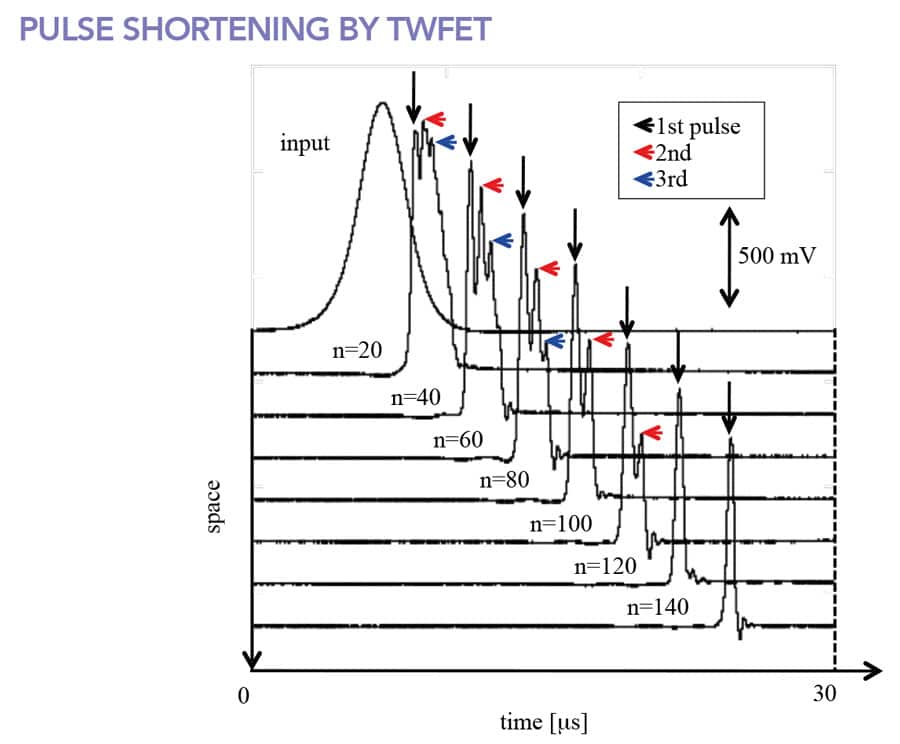 Dr Narahara derived the condition for the shockwave formation on a TWFET and experimentally showed that the TWFET successfully exhibited shockwave formation. In addition, he showed that the shockwave accompanied the drain current such that it reflected the waves originating ahead. When a shock front is formed at the drain, it comes in contact with counter-moving waves and in doing so its frequency becomes greater than the counter-moving waves due to a mechanism called the Doppler effect. Essentially, says Dr Narahara: “The shock front operates as an approaching wall to the counter-moving waves, the frequency of reflected wave becomes greater than the incident one through the Doppler effect.”

The Doppler effect is the change in wavelength of a wave in relation to an observer who is moving relative to the wave source. As the observer moves closer to the waves, each wave takes slightly less time to reach the observer than the previous wave leading to a decrease in the time between the arrival of waves at the location of the observer. This causes an increase in frequency.

Through the combined dynamics between dissipative solitons and shocks, TWFET networks can lead to a new systematic scheme of designing oscillators.

In addition, by properly designing the transmission line size and voltage levels of the applied pulses, when the shock front reaches the far end it is reflected back towards the input. The edge is again reflected at the input to become a stable shock front. The process is repeated continuously to establish edge oscillation. A similar oscillation develops in a transmission line periodically loaded with tunnel diodes and is shown to be a kind of limit cycle that can be synchronised with external oscillation or possibly coexisting edge oscillations. Moreover, the number of oscillating edges increases with the amplitude of the signal input to the gate line. Each edge can be synchronised with the other edges. Double and quadruple oscillating edges were successfully detected by time-domain measurements performed by Dr Narahara.

The future of TWFETs
Dr Narahara is optimistic that TWFETs could someday replace oscillators in modern devices as electronics evolved to require ever-smaller and higher speed circuits. “Through the combined dynamics between dissipative solitons and shocks, TWFET networks can lead to a new systematic scheme of designing oscillators,” said Dr Narahara. Much is still not known about the nature of dissipative solitons and the knowledge imparted by Dr Narahara’s research has shown that the TWFET is a valuable tool for the study of these fascinating waveforms, which have the potential to advance the field of waveform physics as well as contribute enormously to future electronic technological breakthroughs.

Can you tell us your future plans for research in this field?
<>The synchronised dissipative solitons must be verified experimentally in the near future. After the elaboration of the device structure for pulse compression and shock/soliton generation, compound utilisation of TWFETs will become highly valued. In general, wave phenomena are realised through synergistic contributions by dispersion, dissipation, gain, electromagnetic couplings, and nonlinearity. TWFETs contain sources of all these elements so that they have significant potential to develop any natural wave phenomena on a semiconductor wafer. I keep studying what is possible in TWFETs without considering technological values too much. 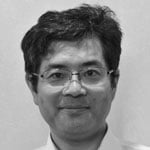 Dr Koichi Narahara studied at the University of Tokyo and then worked at Nippon Telegraph and Telephone Corporation and Yamagata University. He moved to Kanagawa Institute of Technology in 2014 and is now a Professor in the Department of Electrical and Electronic Engineering.