Health & Medicine
Macrophages – large white blood cells that play a role in tissue homeostasis and immunity – have long been thought to derive solely from monocyte cells in the circulating blood. Accumulating evidence now shows that a large proportion of the macrophage populations ‘resident’ within tissues is in fact derived during embryonic development, independent of monocytes. Professor Christian Schulz from Ludwig-Maximilians-Universitat, Munich, is at the forefront of this research. He hopes that understanding the molecular regulation of these cells during development and within their tissue of residence will help design interventions to treat a wide spectrum of diseases in which they have been implicated.

Most people with an interest in biology will be able to tell you that macrophage cells are an important component of our immune system. By engulfing and digesting microbes, cellular debris, foreign substances and anything else that isn’t a healthy body cell, they help to protect us against injury and infection. It is now clear that macrophages are present in all tissues under steady state conditions, and that these tissue-resident cells play tissue-specific roles: tissue remodelling, angiogenesis (blood vessel formation) and regulation of cell metabolism, to name a few. Tissue-resident macrophages are exquisitely adapted to their local environment, acting as regulatory cells of tissue function, and this makes them an attractive target for modern medicine. Understanding the origin and regulation of these cells will be an important first step in the development of intervention strategies to control and instruct macrophage populations.

Until recently, it was believed that tissue-resident macrophages were constantly replenished from pools of circulating monocytes (macrophage precursors) produced by foetal haematopoiesis. However, this concept has been questioned following reports that macrophages in the brain, liver, skin, and many other organs proliferate and self-renew. For example, donor-derived tissue macrophages have been reported to persist for many years in transplanted liver and skin in human patients. The hypothesis was therefore raised of two distinct origins of macrophages: the first being yolk sac haematopoiesis which produces mature macrophages, the second being foetal haematopoiesis which produces blood monocytes. Professor Christian Schulz and colleagues therefore decided to reinvestigate the origin and development of tissue-resident macrophages.

Two populations
Among various biological tools, the team used a technique known as pulse-labelling to map the fate of developing macrophage cells in mouse embryos. They showed that macrophages derived from the yolk sac (YS) circulate in the blood and colonise the embryo, starting with the head region, nine to ten days after fertilisation. By ten days after fertilisation, the cells could be detected in most tissues, where they continued to divide. They remained detectable in tissues throughout development. From twelve days onwards (around the time that foetal haematopoiesis begins in the liver) a second population of macrophages appeared.

Prof Schulz and colleagues set out to determine the origin of these newcomers. They re-examined macrophage development, this time using mice with a deleted Myb gene. The team had previously used this mouse model to show that the protein Myb is required for foetal but not yolk sac haematopoiesis. The results were as hypothesised: YS-derived macrophages developed as normal but the second population of macrophages did not appear, indicating that they are indeed of the foetal haematopoiesis. YS-derived macrophages accounted for most macrophages in tissues of embryos at 16 days after fertilisation.

Importantly, fate mapping models provided evidence that YS-derived macrophages persist in many tissues of adult mice, in some of them (i.e., brain, liver) throughout life. These findings support the view that there are two origins of macrophages in adult tissues; the first are derived from the yolk sac during early embryonic development and the second are derived from foetal haematopoiesis in the liver and later the bone marrow.

A clearer vision
Thanks to this work and further work by Prof Schulz and others, we now have a clearer vision of the origin and development of macrophages. Macrophage progenitor cells appear in the yolk sac and then invade the developing embryo. They colonise all foetal tissues, particularly in the head where they give rise to all of the brain microglia, which will continue to self-renew throughout adulthood.

Later, foetal haematopoiesis produces monocytes. They circulate in blood and need to be continuously renewed by definitive haematopoiesis. In some organs, they differentiate and replace tissue macrophages over time (e.g., lung). However, this population seems more important in the setting of tissue injury or inflammation. Here, monocytes are recruited from blood into tissues, where they differentiate into phagocytes to fulfil specific jobs/duties. They may also renew resident macrophages if needed.

Moving on
Professor Schulz has now turned his attention to the biology of macrophages in relation to their developmental paths in cardiovascular disease. Similar to the work described in this article, current projects utilise in vivo lineage tracing and fate mapping, as well as models for time- and site-specific gene deletion. The team also carries out genomic analysis and proteomics to determine macrophage programming by the local environment and disease-specific signals. This work could eventually aid the development of strategies to control the remodelling of cardiovascular tissues, for example, after myocardial infarction.

What first piqued your interest in tissue-resident macrophages?

Can you give some examples of the tissue-specific functions of tissue-resident macrophages?

A fate mapping model was used to report the persistence of yolk-sac-derived macrophages in adult tissue-resident macrophage populations. Can you explain briefly how this worked?

The development of tissue-resident macrophages has been characterised using mouse models. Are there likely to be differences between macrophage development in mice and humans?

What are the potential therapeutic targets of your research? 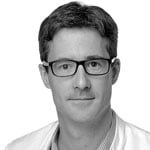 Dr Christian Schulz is Professor of Cardiovascular Immunology at the LMU Munich. He trained in Internal Medicine and worked as a Postdoctoral Fellow at the Technical University Munich. He then moved to the United Kingdom for postdoctoral work at the Centre for Molecular & Cellular Biology of Inflammation and later became a Senior Lecturer at King's College in London.

Prof Schulz’s work focuses on the role of macrophages in tissue homoeostasis and inflammation, specifically processes associated with cardiovascular disease.