Professor Jagdish Hattiangadi of the Department of Philosophy, York University, Canada examines the historical and philosophical roots of the recent concept of “fake news”, and how facts have now become relative to one’s ideology. Anything that does not conform to one’s religious, philosophical or political ideology can be ignored as irrelevant. This epistemological stance was a factor in both the election of Donald Trump in the USA, and the Brexit vote in the UK. In both cases the facts that their opponents adduced, regardless of veracity, could be dismissed as “fake news” without any evidence, and provable lies could be accepted by some as truth. This use of alternative facts, he says, may even threaten world peace, because the facts play an indispensable role in the resolution of disputes.

A Failure of Philosophy
This philosophical failure of supporting the value of knowledge among the leading liberal democracies of the modern world, Prof Hattiangadi says, is a surprising new threat to future peace. Our global economy and institutions were built during the post-World War Two era, based upon the philosophy of government by consent and a theory of knowledge based on a scientific method that has its roots in the English Reformation, when Catholic and Protestant Christian Churches clashed. The different factions of religious worship were in constant conflict with one another until they adopted a model of religiously-tolerant, secular government that would let common knowledge and secular science be its arbiter. This model was spread from England, through the French Enlightenment, which was influential throughout Europe, and spread to the U.S. where it became enshrined in the U.S. constitution as one of its underlying principles.

This philosophy of liberal democracy, as practised in the U.S., separated church from state. Rival religious communities could thus co-exist peacefully within a neutral, secular society. It may be broadly defined as a democracy that protects the freedom of speech and religion, and the rule of law. This analysis of tolerant government was John Locke’s widely admired contribution to political Philosophy. Within such a liberal democracy, we share and respect a common collection of evolving opinions, and especially scientific discoveries, that we value as knowledge. Common knowledge, which includes general as well as specialised scientific knowledge, is indispensable in resolving local disputes peacefully, as all parties have a mutually accepted framework of reference.

However, political movements have recently become persuasive in denying the very possibility of common knowledge. Each movement declares its adherence to an alternative reality, and to some alternative facts, as its motto. Common knowledge is seen by its new critics as controlled by an alien self-interested establishment; set by the scientific community, educational institutions, trans-national institutions such as the UN, and experts in specialised fields, and propagated by the “liberal elite” of the media in the West, and represented by the mainstream political parties, bureaucracies, and judiciaries. The new populists reject all this.

Since knowledge is fractured, according to a widespread understanding of science, the elitist recitation of facts, even scientific facts, may always be dismissed as “fake news”.

A Threat to Peace
The threat to peace today, both domestic and global, has to do with two factors: first, a decline in the credibility of secular knowledge claims among its critics, including even the claims of modern science, and second, a growing mistrust of secular knowledge as a neutral referee in resolving religious disputes.

In liberal democracies, we have held knowledge derived from science in special regard. By reputation, science produces the best researched and the best attested of all universal claims, where knowledge must be proven through experimentation that can be duplicated by anyone and condensed into theories commanding universal approval. But even this kind of knowledge has been challenged as partisan in a certain manner, and it might be argued that part of the blame for this is that we have given up our belief in scientific method and supposed that all general claims even in science are speculative and conjectural.

Philosophers have not shown how we could ever arrive at a common theoretical knowledge of reality. Any claim of science is taken to be a hypothesis of a kind that lacks proof, so the claim does not constitute knowledge. Following some technical arguments of Paul Feyerabend and Thomas Kuhn, it seems that we cannot with justice also claim to be describing reality truly, except, according to Kuhn, by adopting conventions found within small, specialist communities of practitioners of science. As Henri Poincaré said earlier in the twentieth century, when a hypothesis becomes a principle of physics, its proclaimed truth can be seen more as a generally-agreed convention that fits the current facts. It was just as possible that another working hypothesis could have been chosen as the principle of physics. Truth of a principle is thus just a convention among physicists who have freely chosen a hypothesis as a true principle. Michel Foucault later suggested that underlying power structures within society manifest in the language which controls concepts and forms of discourse. Thus, it is not that the case that knowledge is power, but that power is knowledge.

Even the facts described in successive theories of a science can seem to be incomparable because the words in which the facts are stated change their meaning in transition. If we try to compare the knowledge claims of two rival communities, even concerning plain facts, there seems to be no neutral way of adjudicating between their language differences. Certain religions and political philosophies on the other hand, claim certainty for their own knowledge claims as they are supposed to derive from belief in a personal revelation, or in some other supposedly infallible source of knowledge.

The Origins of Conflict
Prof Hattiangadi looks at the turbulent history of science and knowledge with two of the Abrahamic religions, Christianity and Islam, to see where the roots of current conflict come from. When Christianity became the de facto Roman state religion under Emperor Constantine, it became a unifying belief among the cultures and peoples of the vast and culturally-diverse empire. Christian orthodoxy became a unifying ideological emblem that held the empire together. Christian truth was set at the Council of Nicaea and from then on free thought threatened this emblem of orthodoxy, and so threatened the empire; the Emperor Justinian, who codified Roman jurisprudence, also banned the last iteration of Plato’s Academy.

This philosophical failure of the majority of the liberal democracies that have built the modern world is a surprising threat to future peace.

This was especially important in relation to Roman unity against the Persian Empire with which it was constantly at war. Later, the in the Persian Empire, a certain iteration of Islam came to be emblematic in the same way as an orthodox ideology of the empire. Despite the fact that modern science and medicine were products of the belle epoch of the intellectually-liberal Islamic Umma, we must not forget that the great secular University of Jondishapur in Sassanid Persia was destroyed by that same Islamic empire, and we are all aware of what the Taliban and ISIS has done more recently in the name of the same faith.

“Vicious attacks are conducted on secular schools that admit girls by the Afghan and Pakistani Taliban. Iranians shout “death to America,” but it is their own population they wish to control, not America’s.”

In each of the two old warring empires, only submissive philosophy was tolerated – or thought that is not free but submissive to orthodoxy. The threat to free thought and philosophy came, however, not from the religion, but from the political ideologies of Christianity and Islam, respectively, in the two empires. The legacy of intolerance has been taken up as a political tool by non-religious but equally intolerant ideologies, in the twentieth century, for instance in National Socialist Germany and the International Socialist Soviet Union, and still more recently by other religions in the world.

A Fight for Minds
In recent years, religious communities have become alarmed by the increasing loss of their young members to secular urban communities. The lure of relatively high-paid work, and the promise of fulfilment of their highest personal aspirations for themselves within diverse cosmopolitan urban settings draws the young away from the more limited opportunities available in the religiously orthodox rural areas. Urban secularism is not formally organised, but it is a meta-culture that is easily absorbed by individuals without any need for religious conversion. It can include freedoms from religious restrictions on hedonistic pleasures and alternative lifestyles. It is seen by some religious communities as a rival religious system, and one that is opposed to their own, one that is sinful, and spread and supported by the international liberal “elite”.

More alarmingly, secular thought no longer seems to be a neutral referee of disputes. There is a potent challenge in secular Darwinian science to arguments for the existence of God, which is among the most basic of all religious beliefs within the Abrahamic religions. Secular, scientific knowledge is seen to be claimed, not by a neutral referee, but by this elite, devious, sinful and dangerous ideological rival.

Since knowledge is inevitably fractured, in accordance with a widespread but unfortunate understanding of even our best science, the elitist recitation of facts, even scientific facts, may always be dismissed as “an alternative reality”. In any dispute, a religious, philosophical or political sect can claim its own reality all for itself, whenever common facts become inconvenient. These special realities are more simple and concrete, making it easier to navigate in an increasingly complex world. Which version of reality succeeds will then be decided by a test of strength, or a struggle. The claim of fractured knowledge thus poses a severe threat to all the mechanisms of peaceful international dispute resolution that have been built up since the end of World War Two, and consequently to the future of peace in the world.

How does this affect India, and how does it affect the non-liberal democracies in the East such as China, Malaysia, Indonesia, Vietnam and Brunei?

What part has the Internet had on all this? 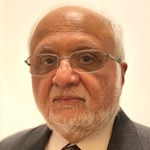 Born in India, Jagdish Hattiangadi studied at Bombay University, London School of Economics and Princeton University. He is Professor at the Department of Philosophy and Division of Natural Science, York University, Toronto..

Professor Hattiangadi‘s research explores how scientific knowledge is acquired by using Bacon’s currently misunderstood method of “true induction”, and why it is misunderstood.