Behavioural Sciences
Understanding the ecology of complex adaptive systems, such as organisms, societies, and languages, poses many challenges. Dr Chris Girard, Associate Professor of Sociology with the Department of Global and Sociocultural Studies at Florida International University, has developed an evolutionary model, known as coevolving informatics, that offers a transdisciplinary approach to understanding complex adaptive systems. Coevolving informatics employs complexity and evolutionary theories to examine the processing of information within systems and demonstrates how racial and ethnic signals can coevolve with society’s geospatial dynamics.

Understanding the ecology of complex adaptive systems, such as organisms, societies, and languages, poses many challenges. A thorough understanding of all of the individual components necessitates an understanding of the system as a whole, given that the whole system is more than the sum of its parts. Dr Chris Girard, Associate Professor of Sociology with the Department of Global and Sociocultural Studies at Florida International University, has developed an evolutionary model: coevolving informatics. This paradigm offers a transdisciplinary approach to understanding complex adaptive systems. Throughout this research, Dr Girard adopts an informatics perspective, employing complexity and evolutionary theories to examine the processing of information within natural and artificial systems. 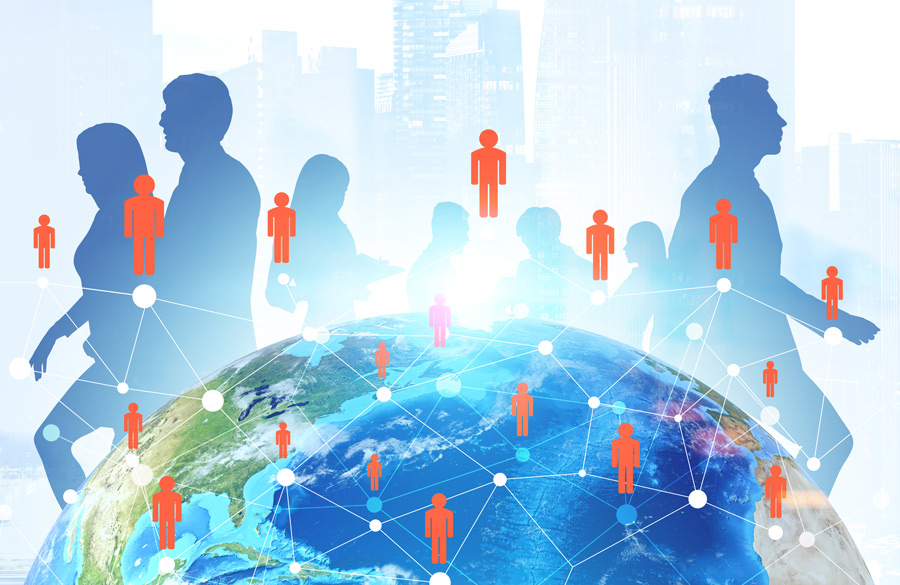 Thermoeconomics
In line with thermodynamic-economics specialisation, when a system’s complexity increases so does the exchange of resources required in order for the system to grow and reproduce. Initially, during the extensive phase, these exchanges tend to be vertical, or hierarchical. Later, the system moves into the intensive phase and these exchanges become progressively more horizontal.

Signal processing
When entities interact with each other they produce new information, or signals, increasing the system’s total information. The system’s signal processing facilitates its adaptation to a changing environment. Dr Girard comments: “Indeed, major evolutionary transitions in complex adaptive systems are based on new ways of storing, transmitting and processing information. Most significantly, this transformation allows information processing to become more independent from physical location.” 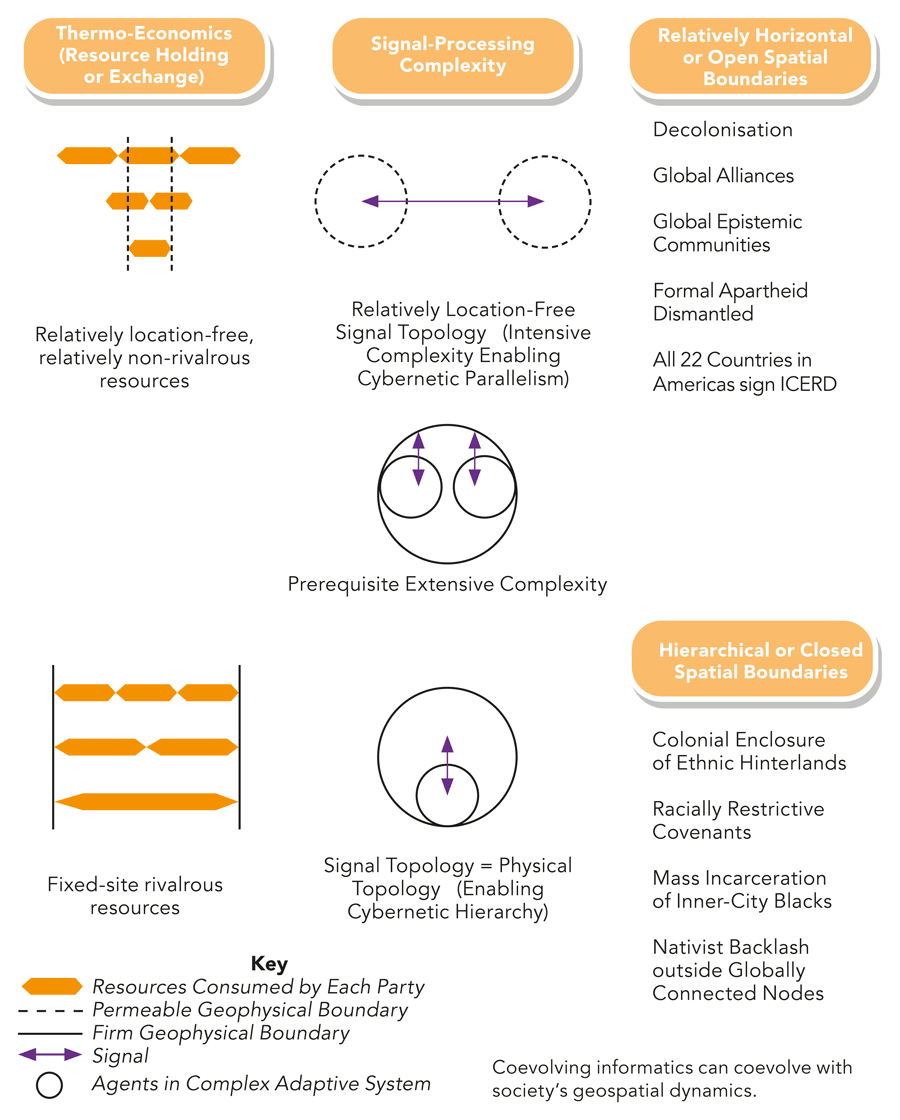 Cybernetic parallelism
The uncoupling of signal processing and physical locations allows for more location-free signal topology. Computer science has shown that this enhances the ability to adapt to new situations with spatially independent coevolving competitors learning from each other’s developments. Dr Girard refers to this feature of signal processing as ‘cybernetic parallelism’ as it allows numerous simultaneous entities to be processed in parallel, and describes how independent agents, such as scientists, organisms and immune systems, learn from their mutual exchange of information. Furthermore, this free exchange of ideas enhances the independence and creativity in a system’s adaptive process.

This learning process is the foundation for successful ecological adaptation, but it is also constrained by path dependency and probability, since learning relies on how things have been done previously and is somewhat built on trial-and-error. Charles Darwin recognised this in his principles of descent and divergence, when he recorded that different adaptations are capable of existing simultaneously.

Entropic disorganisation
Dr Girard draws attention to how a system’s adaptive responses may neglect to address pollution and environmental damage. This can result in environmental chaos or entropy debt, such as global warming, causing the collapse of an entire system. Racial-ethnic barriers can also incur system-taxing entropic debt resulting from costly boundary conflict. The collapse of colonial empires after World War II is a prime example of this entropic disorder.

Coevolving informatics
Taking the three coevolving dimensions together with his concept of cybernetic parallelism, Dr Girard has developed ‘coevolving informatics’, a model that “provides a digital-age view of the forces propelling racial-ethnic hierarchies infused with racism, nativism, and ethnocentrism.” He explains how racial and ethnic signals can coevolve with society’s geospatial dynamics. The signals carry information about the system dynamics and are only able to draw meaning from the systems that process them. The hierarchies are embedded in spatial challenges over scarce resources during a system’s extensive growth period. These resources, which are essential for a system’s growth and reproduction, are situated within spatially bounded sites, such as land or human bodies. Coevolving informatics links the construction of racial-ethnic boundaries to zero-sum contests over fixed-site resources. Such contests were integral to the unequal ecological exchanges of resources, such as sugar and cotton, during colonialism.

Signal processing complexity
In the context of this research, signal processing controls whether racial-ethnic groups pass through geospatial checkpoints in socially bounded domains such as workspaces, neighbourhoods and countries. The central motivation is evolving signal-processing complexity that realigns global geospatial barriers. With his focus on evolving complexity in signal-boundary systems, Dr Girard puts forward two interconnected proposals. Firstly, if rivalrous resources cannot be separated from their specific geophysical location, as with fixed-site resources, zero-sum contests ensue for control of this location and its resources. If a particular ethnic group is consistently denied full spatial access to the location and its resources, the group is subject to racialisation. This proposition imbeds racial-ethnic signals in socio-ecological systems enclosed within geophysical boundaries. Secondly, during the post-industrial era, racialised cleavages will be diminished by the coevolution of signal-processing complexity and non-territorial system adaptation. This proposition suggests that barriers entrenched by their geophysical location, such as racial-ethnic barriers, can be penetrated or realigned by a society’s signal-processing complexity.

Cybernetic parallelism has generated epistemic and geopolitical challenges to formal apartheid and racialising immigration policies, but not without friction or reversals.

Spatial partitioning
Spatial boundaries limit resources, so as social systems coevolve there are winners and losers in the zero-sum contest of resource extraction. This leads to the extensive phase with the vertical exchange of resources demanding the costly use of force e.g. European firepower enabling the conquest of ethnically distinct landscapes in order to acquire tropical resources. This results in racialisation because such spatial segregation restricts the inhabitants’ decision-making independence, mobility, and access to resources located within these captured landscapes. Dr Girard describes how “spatial partitioning has been integral to enslavement, policing, and incarceration of racialised populations.”

Post-industrial erosion
Information processing becomes more independent from physical location as post-industrial society undergoes intensive growth. This coevolution of signal processing complexity and non-territorial adaptation challenges racial-ethnic hierarchies and diminishes racialised cleavages so geo-ethnic boundaries erode and become more permeable. This results from both the increasing cost of resource-holding hierarchies, such as wars, policing and prisons, and a more horizontal division of labour involved in the production of knowledge. The boundary-penetrating soft power of cybernetic parallelism increases as information becomes a larger part of a system’s produced value. Cybernetic parallelism’s hierarchy-levelling power is derived from the growth of education and global expert communities, together with the growth of information and communication technologies, Nevertheless, the growth of digital-age entropy debt, or entropic disorganisation, is still apparent in displaced heartland communities and global warming. Dr Girard observes that “this generates costly boundary clashes over local cultural sovereignty and material resources, reinforcing traditional ethnic hierarchies.”

While racial-ethnic barriers have been reduced through cybernetic parallelism and racial-ethnic hierarchies levelled, the current turf-defending nativist resurgence could reinforce geo-ethnic boundaries and provoke more ‘racially’ contentious, authoritarian governance. It is unclear what course this unfolding chaos will take as, in accordance with the fundamental conjecture of coevolving informatics, not all signal-boundary systems will successfully adapt. Dr Girard concludes that “cybernetic parallelism has generated epistemic and geopolitical challenges to formal apartheid and racialising immigration policies, but not without friction or reversals.” 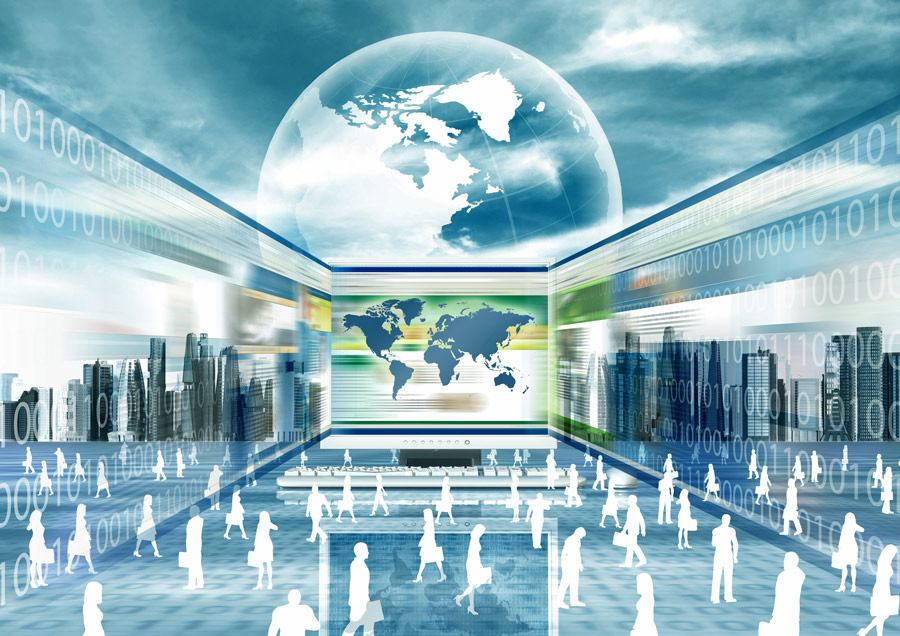 Given your research into coevolving informatics, what would be your advice to social policy makers wanting to avoid entropic debt?

Globalization and the erosion of geo-ethnic checkpoints was last modified: September 2nd, 2020

Trained as a quantitative sociologist, Dr Chris Girard received his Ph.D. from the University of Wisconsin-Madison. He teaches in the Global and Sociocultural Studies department at Florida International University. To introduce a transdisciplinary paradigm, Dr Girard recently published in an economics journal.