Arrythmia – abnormal heart rhythm – can be life-limiting and even life-threatening. In this interview, Research Outreach talks to Professor Benjamin J Scherlag of the University of Oklahoma, USA, about his pioneering research into what was the entirely new field of cardiac electrophysiology. We learn about the ‘His bundle’, ganglionated plexi, and how it is possible to treat the heart by stimulating part of the ear. We also explore his more recent work into hybrid-plasma in plants, and its effect on growth and metabolism.

Clinical electrophysiology, the application of electricity to monitor or produce a physiological effect in a person, is an exciting and significant branch of medicine. Cardiac electrophysiology refers specifically to the use of electrical stimuli to understand and treat rhythm disorders of the heart (arrythmias). Research into, and the subsequent application of, increasingly effective and decreasingly invasive uses of this technology can be life-changing and life-saving for patients.

In this illuminating interview, we found out more from a pioneer in this fascinating field, Professor of Medicine, Benjamin J Scherlag of the University of Oklahoma, USA, as well as delving into why his dual role as both a basic scientist and close collaborator with clinical cardiologists has been so valuable.

You are known internationally for your pioneering contributions to the field of electrophysiology. Where did it all begin?
I received my PhD in 1964 from the Downstate Medical Centre in Brooklyn, New York. I did my postdoctoral work at Columbia University under the tutelage of Dr Brian Hoffman, who was at the time one of the foremost figures in cardiac electrophysiology. Clinical electrophysiology was not really known at that time. The studies that I did, both at Columbia University and then later at the Staten Island Public Health Service Hospital, involved using a catheter that could be introduced through peripheral veins into the heart to record from a specific critical site of the cardiac conduction system called the ‘His bundle’.

The His bundle lies between the upper and lower chambers of the heart, conducting the electrical impulses from one to the other, and initiating the mechanical activity of the heart leading to delivery of blood to all parts of the body. Discovery of the His bundle meant that there was the means for electrical pacing of the heart to produce normal function when the conduction system malfunctioned. This was the basis for a sub-science of cardiology that came to be known as ‘clinical electrophysiology’. This field is what continues today as a means of recording the rhythm from various parts of the heart and also ablating abnormal structures in the heart (to disrupt the electrical signals causing irregular heartbeats) to alleviate and actually cure, in many cases, cardiac arrhythmias in patients.

We do our basic science studies and then use that information to bring it to fruition in the clinical arena.

From the inception of electrophysiology through to today, what has kept you engaged and invested in the research?
I’ll give you an example. In 2000, Dr Pramod Deshmukh took the catheter we had been using, and he used it as a screw-in lead attached to the His bundle; so now he could not only record, but also control the heart action in a normal fashion. Previously, for patients with heart failure, catheters were inserted into the left and right ventricle, trying to synchronise the activity of the two chambers in order to get a much more effective output of blood to the body, thereby ameliorating heart failure. But with Deshmukh’s method, one could produce this synchronisation with a single catheter, and get the same or even better results in patients with heart failure. That continues today, and it’s now one of the major ways in which we do cardiac resynchronisation therapy.

When it comes to clinical electrophysiology, the lab work and your work as a scientist, how do you find that those very disparate worlds – interacting with people, interacting with research, and then interacting with microscopic details of physiology – relate to each other?
It certainly was my good fortune that from starting at the Staten Island Hospital, until the present, I have always been collaborating with the clinical electrophysiology team. Until this day, I’m on the faculty at the University of Oklahoma Health Sciences Centre, Department of Medicine, and continue my collaboration with the faculty at the Heart Rhythm Institute.

Our research has not been limited to the work that we did with the His bundle; this was just a template for continuing our clinical collaborations. We do our basic science studies and then use that information to bring it to fruition in the clinical arena. That is why I have continued to nurture this cooperation between lab and clinic. For example, in 1973 we came across another interesting structure in the heart which most people had thought to be a ligament. We found that there was a continuation of atrial tissue from the coronary sinus into this ligament. The clinical electrophysiologist found that it was a critical area for the production of permanent and persistent atrial fibrillation (irregular and abnormally fast heartbeat). Therefore, it could be ablated very easily. There was a vein that ran within the ligament, and clinicians were able to inject alcohol into that vein, destroying the aberrant atrial tissue which is the cause of persistent atrial fibrillation.

This was not the only advancement that followed this template. In a more recent discovery, we found that, in animals, we could stimulate the vagus nerve — which innervates the heart — through an area called the tragus. The tragus is the anterior protuberance of the ear, and it contains the auricular branch of the vagus nerve. We were able to show that the vagus nerve played a very important role in atrial fibrillation in animals and again it became a means in patients by which we could use a relatively non-invasive method (without ablation) to control atrial fibrillation.

Much of your research has centred on demonstrating the basic mechanisms underlying cardiac arrhythmias; in particular, atrial fibrillation and its trigger, the ganglionic plexi. Can you tell us more about your research into the role of the ganglionic plexi in this condition?
The ganglionated plexi are clusters of neural structures which are found at the entrances of the pulmonary veins bringing blood back to the heart. It was discovered that inflammation of the area of the pulmonary veins was producing high levels of abnormal electrical activity, which was then propagated into the atrium and producing atrial fibrillation. Clinical electrophysiologists were able to take an electrode catheter, place it at the origin of these pulmonary veins and use radiofrequency energy to ablate the abnormal firing. By this ablation method these physicians were able to rid the patient of recurrences of atrial fibrillation, one of the most common disorders of the heart in the elderly population.

It’s a much less invasive way of monitoring things; something the size of a hearing aid to keep your heart going!

In this regard, the tragus stimulation methodology is not only used for supressing atrial fibrillation, but also in the management of epilepsy, Alzheimer’s disease, and depression. These developments are based on the connections of the vagus nerves to the various body organs but also to parts of the brain. 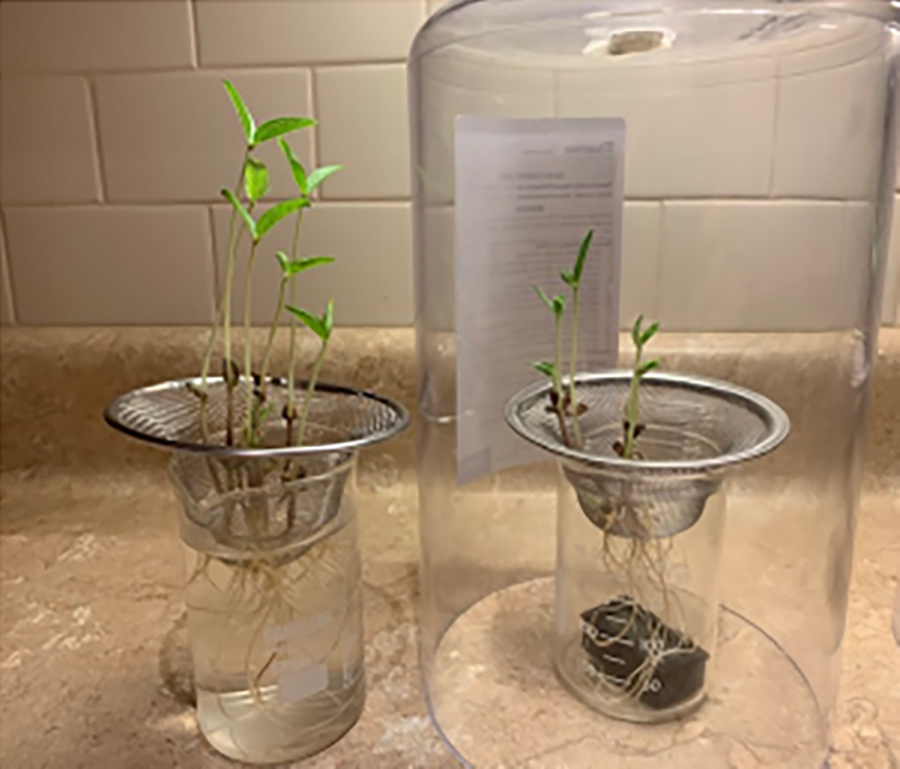 Figure 1. Mung bean seeds were initially germinated in water, then separated into two sets. Seedlings grown in water (left) were compared to those in hybrid-plasma (HP) (right). The HP plant showed diminished growth with under-developed leaves in contrast to normal growth with well-developed leaves in the hydroponically grown plants.

Your more recent work into non-thermal plasma for plants feels quite removed from clinical cardiology. What prompted you to take this turn?
We continued to do basic electrophysiology until about four years ago, at which point animal studies such as ours were terminated as new university policies were put in place. Under those circumstances we were forced to move into a different area of research. Botany had always been a subliminal interest of mine and we were very fortunate to get laboratory space in the Department of Physiology to start studies that I had been anxious to do for many years. We were fortunate to discover a new form of water, which we called hybrid-plasma. This innocuous part water/part gas could be formed from water without the input of external energy, enabling it to be accumulated and stored easily. Multiple applications of hybrid-plasma followed revealing anti-oxidant anti-ageing, and anti-dehydration properties.

What piece of research or discovery are you most proud of?
In retrospect my greatest gratification has been in providing experimental evidence in the basic science laboratory which was used to alleviate abnormal cardiac conditions in patients worldwide. My co-investigators and I are now mostly excited by our newly developed hybrid-plasma which promises breakthrough advances for health and longevity.

The heart of the matter: Clinical electrophysiology and beyond was last modified: November 24th, 2022 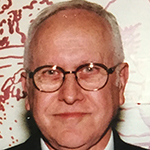 Dr Scherlag is a Professor of Medicine at the University of Oklahoma Health Sciences Center. He is internationally known for experimental studies, leading to the development of the recording of electrical activity from the His bundle in the heart in animals and in man.

Dr Scherlag is well known for his contribution to the field of clinical electrophysiology. His recent work explores the anti-ageing properties of hybrid-plasma.

Our research was funded by the Helen and Wilton Webster Foundation through the University of Oklahoma Research Foundation.

I would like to acknowledge Ronald A Scherlag, BS, MBA and Sunny S Po, MD, PhD my co-investigators in our ongoing research projects.