Thoroughbred racehorses are exceptional athletes with explosive speed. At flat-out gallop, their working muscles generate heat faster than it can be lost, causing their core temperature to rise dramatically during racing. Through years of study, Meg Brownlow from Racing Australia and James Mizzi from Hong Kong Jockey Club have revealed the exceptional thermoregulatory mechanisms that enable racehorses to cope, including sweating, increased surface blood flow and a ‘panting’ form of breathing which contributes significantly to whole body cooling. Their findings provide crucial information for equine professionals caring for racehorses, particularly in hot and humid conditions.

Thoroughbred racehorses have been selectively bred for speed over hundreds of years and can reach around 65 kilometres per hour. But running at pace, particularly in hot and humid environments, represents a significant physiological challenge – how do they cope? Through years working closely with these specialist athletes, Meg Brownlow from Racing Australia and James Mizzi from Hong Kong Jockey Club have discovered the extraordinary rapid recovery mechanisms that racehorses possess alongside their exaggerated flight response.

‘Thoroughbred racehorses have superb thermoregulatory capacity, enabling them to dissipate heat to the environment by both panting and sweating mechanisms,’ say the researchers. ‘For comparison, the human athlete can only sweat, and the greyhound can only pant.’

When exercise activity and intensity are below maximum levels thermoregulation can occur simultaneously to keep heat in check. In a race, however, thoroughbred racehorses store excess heat and during a flat-out gallop they can theoretically generate enough heat to increase their core temperature by 1°C for every minute of exercise.

It’s critical that this metabolic heat is dissipated as quickly as possible after exercise. Because the horse has a relatively low surface area available for dissipation compared to the amount of heat it produces, on paper it should be less effective at thermoregulation than a human athlete. However, Brownlow and Mizzi have identified several specialised thermoregulatory processes which combine to make the thoroughbred racehorse as expert at managing heat as it is at running. ‘Evaporation is the most important pathway for heat loss,’ explains Brownlow. ‘In the horse it takes place on the skin surface and on the mucosal surfaces of the respiratory tract.’

Key to the researchers’ work, however, is also the recognition of the role environmental conditions play in the effectiveness of these mechanisms and understanding how they might impact evaporation to the detriment of the horse’s cooling ability.

Blood in the jugular vein has been recorded as 3°C cooler than the core body temperature after exercise.

Racehorses have a vast network of small blood vessels within the skin that open in response to heat. Working muscles are prioritised by cardiac output during the race, but immediately post-race that blood flow is redistributed. The superficial blood vessels dilate, some becoming extremely large, and transform the horse’s body surface into a highly vascularised heat-exchanger, through which heat carried from the core can dissipate into the environment. In particularly hot conditions the researchers believe almost all the horse’s surface body area is deployed for heat loss. Heat is also lost from blood vessels at the surface via convection, where heat is transferred from the body to the surrounding air. In cooler weather, when the body-environment temperature gradient is large, heat loss by convection is faster. 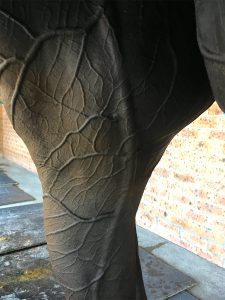 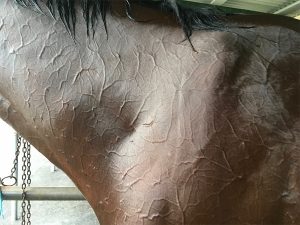 A racehorse’s respiratory system also plays a large role in thermoregulation – as much as 25–30% of metabolic heat can be lost in this way. The researchers believe that panting has been underestimated as a cooling mechanism. Racehorses pant with their mouth closed but expand their nostrils to accommodate increased airflow. Their breathing becomes rapid and shallow, so air mostly flows in and out of their upper respiratory tract which has a notably large surface area with lots of blood vessels. Panting therefore brings large volumes of air across this highly vascularised tissue. At the same time, the horse’s nasal mucous membrane becomes hyperaemic – it fills with blood – creating a heat-exchange system whereby the air breathed in through the nose is warmed and humidified, dissipating heat into the atmosphere as the horse exhales. Venous blood cooled in the nose then travels down the dilated facial veins into the jugular vein where it has been shown to reduce the temperature of the blood in the right side of the horse’s heart. Blood in the jugular vein has been recorded as 3°C cooler than the core body temperature after exercise. Similarly, blood drains from the ocular vein (near the eye) at the skin’s surface into the cavernous sinus where it may contribute to blood cooling in the carotid artery before it reaches the brain.

Alongside changes to blood flow and respiration, the researchers found that sweating is the most effective method of heat dissipation. Horses have the highest sweat rate in non-human mammals and have sweat glands all over their body. Their sweat also contains a detergent-like substance – latherin – that helps it spread across their hair and skin. Cooling by sweating is a two-part process that first involves the transition of sweat to vapour by evaporation, and then diffusion of vapour into the surrounding air. Water vaporisation itself requires energy which in this case comes from the horse’s body, thereby dissipating heat. In humid climates, however, sweating is less effective because the vapour pressure gradient between the skin and the surrounding air decreases, causing sweat to drip rather than evaporate.

Brownlow and Mizzi’s observations have particular importance for understanding the effects of racing in high temperatures and humid conditions. These can put a strain on racehorses’ natural cooling capabilities because they make convection and evaporation much less effective. The researchers stress the importance of equine professionals understanding the racehorses’ thermoregulatory mechanisms and recognising the impact of ambient temperature, radiant heat, absolute humidity, and wind speed at the racetrack, so they can quickly determine the best way to ensure rapid cooling. Assistive cooling always depends on hosing horses with cold water, while on more humid days cooling efficiency can be increased by directing dry fans over the horse to increase air movement. Brownlow has also designed a special cooling collar containing crushed ice which can be used to apply direct cooling to the carotid artery and jugular vein.

Thoroughbred racehorses are exceptional athletes with phenomenal speed and unique cooling mechanisms. Like all athletes, they need appropriate post-race care to maintain their health, fitness, and longevity. Brownlow and Mizzi’s studies will help make sure their wellbeing is maintained in the best possible way. 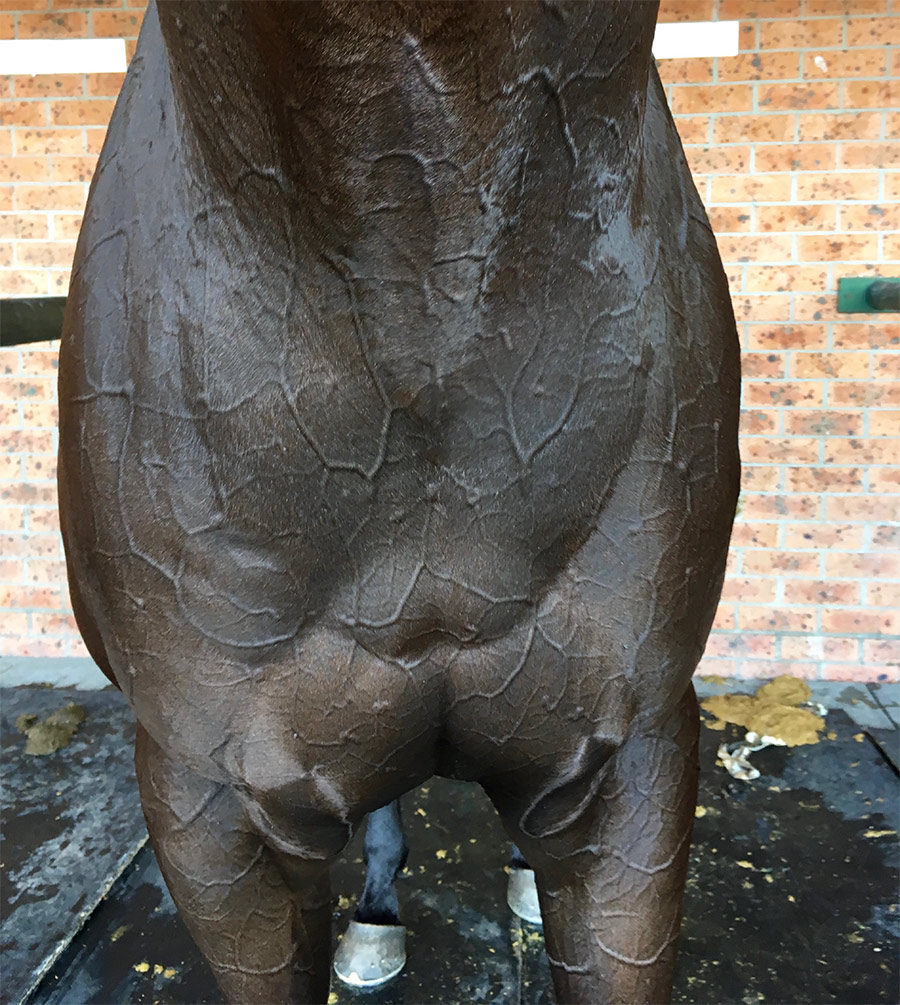 What, if any, are the common misconceptions about cooling horses after exercise?

There are two controversial topics concerning cooling horses after exercise.

Does water temperature matter?
The critical thermal maximum is the temperature above which tissue damage can occur. The time taken to decrease core temperature is therefore critical and is ideally less than thirty minutes. Heat is transferred outward from the core by conduction through body tissues and via the blood vascular system, and is driven by temperature gradients from high to low. Lowering the skin surface temperature using cold water accelerates this process. Warmer water has less effect on the gradient from core to skin.

Scraping
It is a traditional practice to scrape the skin after cooling water has been applied. This is based on the belief that the water layer has an insulating effect and will cause heat retention, which is partly correct. In hot, dry, windy conditions, scraping is not required because evaporation from the skin surface will be rapid and complete. However, under humid conditions, scraping is considered necessary because any heated fluid remaining on the skin will further inhibit cooling by impairing the evaporative process. 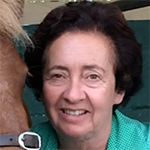 Meg Brownlow worked for Racing NSW for 30 years and had during that time become awestruck by how these magnificent creatures were able to perform and thermoregulate so efficiently. A study into the use of the infrared thermometer to detect ‘hot’ horses yielded more insights and observations such as those found on these pages. A meeting with a like mind (James Mizzi) enabled lively discussion and debate and resulted in a series of articles which hopefully have proved useful to the many on-track veterinarians who care for these horses on a routine basis. The aim above all is to keep them safe and to honour their welfare. 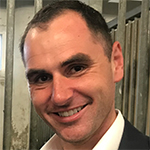 Brownlow and Mizzi study the effects of heat and humidity on the complex thermoregulatory mechanisms of thoroughbred racehorses.

This work is the culmination of many years of observations, and although not part of the heat study programme funded by Racing Australia, which enabled close study of large numbers of thoroughbred racehorses, it provides a perspective hitherto unavailable. My thanks to the members of the heat study team, Melissa Kay, Carol Griffiths, Sue McMaster, Kylie Smallwood, and Pat Cozzi, for their hands-on help, insights, and continual encouragement. To my colleague and co-author a very special thanks for walking the line.