Health & Medicine
Dr Margot Taylor, Director of Functional Neuroimaging at the Hospital for Sick Children and Professor at the University of Toronto, is investigating how very preterm (VPT) birth impacts social cognitive function including Theory of Mind (ToM), a skill that enables us to appreciate that perspectives and beliefs of others can differ from our own. By using neuroimaging techniques, Dr Taylor has explored the neural networks that underpin the association between VPT birth and ToM.

Everybody has a unique set of beliefs and principles, and the ability to appreciate these differing opinions is an essential part of social living. This phenomenon is known as ‘Theory of Mind’ (ToM) – termed a ‘theory’ because the mind cannot be directly observed. We can only interpret what others are thinking/feeling by their speech, body language and facial expressions. These cues allow us to visualise that person’s perspective and anticipate their behaviour.

Using innovative neuroimaging techniques, Dr Margot Taylor and her colleagues have been the first team to investigate the impact of very preterm birth on social cognitive development

As children develop, their ability to comprehend these emotive indicators improves alongside their emotional intelligence. ToM ability typically emerges between four and five years of age and development continues through adolescence into adulthood. In some cases, however, children do not master ToM and struggle to understand perspectives different from their own. As a consequence, these children may have difficulties across a range of social skills, such as understanding what others mean during daily social interactions or having empathy for others.

Individuals who suffer from autism spectrum disorder, attention deficit disorder and schizophrenia are particularly prone to deficient ToM. As a result, these children and adults often find social situations stressful and difficult to cope with. However, because deficits in ToM are only apparent in social situations, ToM impairment is often not recognised until children start school, where adaptive social functioning becomes crucial, not only to making friends and dealing with new and complex social situations but also in learning.

ToM in very preterm-born children
Research has shown that poor ToM also occurs in very preterm (VPT) born children: babies born at a gestational age of less than 32/40 weeks. In Canada alone, over 4,000 VPT babies are born every year. Even though improvements in neonatal intensive care mean that fewer VPT infants suffer from serious health conditions, over half of VPT children experience difficulties such as academic underachievement and cognitive impairment, including ToM deficiency.

Despite the prevalence of VPT births and the subsequent detrimental lifelong impact, little is known about how neural pathways are affected by early birth, which leads to poor social-cognitive abilities, including poor ToM skills. By using innovative neuroimaging techniques, such as magnetoencephalography, coupled with classic ‘false belief tests’, Dr Margot Taylor and her colleagues, Sarah Mossad in particular, have been the first to investigate the impact of VPT birth on this critical social-cognitive skill.

False belief tasks
A standard protocol used to assess ToM ability is the ‘false belief task’, whereby a person must realise that another individual holds a belief about a situation that is different from their own and from reality. The ‘Jack and Jill’ false belief task was used by Dr Taylor and her team to compare ToM abilities in VPT vs. full term (FT) children. Participants saw a series of cartoon images projected in sequential pairs on a screen. In the first image, Jill sees Jack about to drop a ball into either a blue or red hat. In the second image, Jack either switches the location of the ball or drops it into the same hat. During the second image in the pair, Jill is either present for the ball switching or absent. Therefore, if Jill does not witness the ball being switched, she has the false belief that the ball is still located in the original hat. Having seen the two cartoon images, participants were then asked the question: ‘Where does Jill think the ball is?’ and responded using a button box. 300 trials with both true and false belief examples were run. Results showed no significant difference in behavioural performance. When tested outside the scanner on various scenarios requiring ToM skills, however, VPT children performed significantly worse than FT children.

Despite similar behavioural performance in the false belief task in MEG, Dr Taylor showed that neural processing is different in VPT compared to FT children. Both groups engaged some of the regions involved in false belief processing, referred to as the ToM or ‘mentalising’ network. In a previous study, performed on adults, Dr Taylor highlighted this network using MEG. Activation begins in the occipital regions, followed by the right inferior frontal gyrus and the temporal-parietal junction.

Results showed that activation in all regions was reduced and often delayed in the VPT compared to the FT group. Key findings indicate the importance of the temporal-parietal junction in ToM and false belief processing. Following the inhibition of one’s own beliefs, in order to see from another person’s perspective, the temporal-parietal junction is activated. MEG imaging showed that FT children recruit the right angular gyrus, temporal-parietal junction (rTPJ) more than VPT children in false belief. In contrast, the VPT children recruited primarily temporal brain regions to successfully complete the task, suggesting their use of alternative strategies and underutilisation of the mentalising network, which may explain impairments in ToM ability frequently observed in VPT children.

Future research
The brain is an extremely complex organ and a full understanding of the neural underpinnings of social cognition – both good and poor abilities – is difficult to achieve. However, Dr Taylor’s ground-breaking research has highlighted some of the key neural differences underlying ToM in VPT and FT children. She and her colleagues are continuing their investigations into the cognitive consequences of VPT birth. They propose a series of longitudinal studies that focus on investigating how neural patterns change as both VPT and FT children develop, using cognitive and social-cognitive tasks.

The impacts of impaired social cognition can be very detrimental and a lifelong handicap. Without effective intervention, individuals may have a reduced quality of life, as they struggle to navigate social situations and forge relationships. In children, this in turn would impact their academic performance. Therefore, it is essential that we develop methods to identify ToM impairment early on. Dr Taylor’s team aim to establish predictive models that will identify children who are more vulnerable to developing social-cognitive difficulties. Targeted intervention techniques could then be used to teach these children ToM skills and help them to develop their social-cognitive abilities, greatly improving their quality of life.

Why is impaired ToM prevalent in very preterm born children?
<>We believe that very preterm birth impacts the development of brain networks critical for social-cognitive abilities; our studies will determine the atypical brain function underlying this.

Theory of Mind (ToM) allows us to understand the beliefs, emotions or mental states of others and that they can be different from our own

What are the benefits of using magnetoencephalography to examine neural networks underpinning ToM?
<>MEG is an exceptional neuroimaging technique as it provides information on both where and when in the brain processing is occurring. The speed of thoughts and where they are happening can change enormously with age and with clinical populations; being able to identify what the differences are allows us to understand why some groups are not able to master ToM skills adequately.

What are the main neurological differences between very preterm and full-term infants?
<>VPT infants have a much higher risk of brain injury, and can sustain white matter injury at birth. These effects can be seen throughout childhood, but do not relate directly to the social and cognitive deficits that this group often experiences. The deficits are due to atypical brain function and that needs to be studied by techniques such as MEG. Some of these VPT children show amazing resiliency despite early brain injury; we want to understand what underlies that, to be able to foster it in all of these high-risk children.

How can we treat impaired ToM?
<>There are interventions (often developed for children with autism) that can teach children how to behave more appropriately in social circumstances, and better understand what others mean with language and expressions. The children also need to learn what impact some of their own behaviours have on others. These interventions are usually based on intensive social modelling and role-playing approaches. 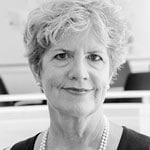 Dr Taylor received her doctorate from McGill University in 1981 and came to SickKids in Neurology as Director of Evoked Potential Labs. She moved to Toulouse, France in 1998 as Directeur de Recherche, CNRS before being recruited back to SickKids in 2004, as the Director of Functional Neuroimaging.