Physical Sciences
Ball milling is used in the pharmaceutical industry to reduce the size of particulate material such as pharmaceutical granules. Dr Alexander Krok and Dr Sandra Lenihan from Munster Technological University, Ireland, have developed a computational approach to achieve optimal, energy-efficient size reduction in ball milling resulting in the production of high-quality particulate material (i.e. granules) of homogeneous shape and size.

Ball milling is a technique that is utilised by the pharmaceutical industry for granular size reduction of drugs or excipients. There are many reasons to mill particulate materials. Very often, the milled product is required to have a specific surface area, or it might be a process requirement that the fragments are consistent in shape throughout the whole batch. This is because the shape, size and the surface-area-to-volume ratio of the particles are parameters that affect critical properties of the material, such as its solubility or its reactivity in the chemical processes for which it is employed. Variables such as the rotation speed of the drum and the physical properties of balls and milling material have the most significant influence on the final quality of the product. It is also necessary to consider the optimum filling level of both milling material and balls. In order to achieve maximum production yield with minimal costs, it is important to determine how each factor affects the average size of the particulate fragments in the final product. Traditional approaches often fail to predict the mechanisms of fragmentation of granules or particle reduction.

Dr Alexander Krok and Dr Sandra Lenihan, from Munster Technological University, Ireland, have developed advanced computational models to achieve optimal size reduction of granules with non-uniform shape and different size in ball milling for the pharmaceutical industry. Drs Krok and Lenihan aim to study and validate the effectiveness of a computational method known as the discrete element method (DEM), instead of a technique used in previous research where the breaking behaviour was estimated through the impact energy of ball collisions as the driving force for fracturing. 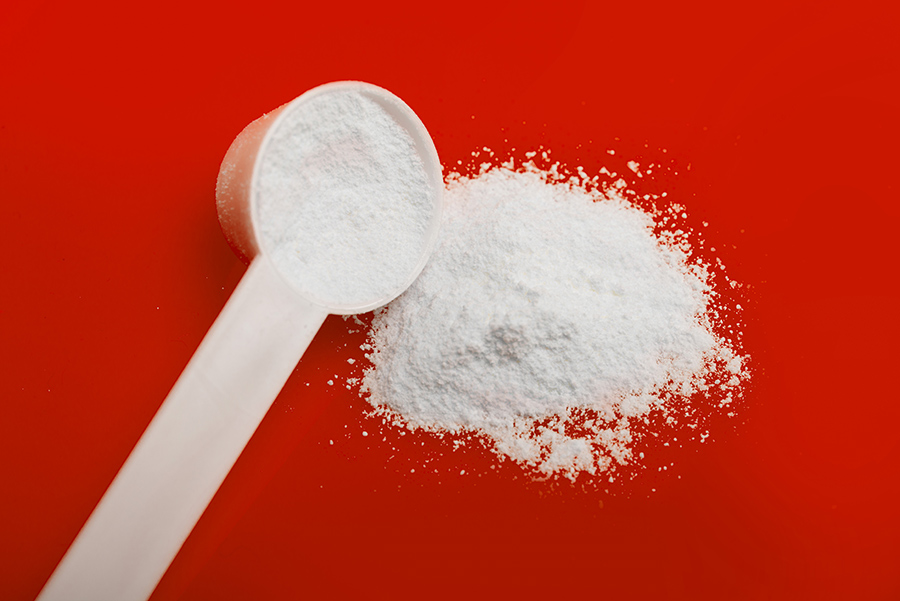 Effect of milling speed on granule fragmentation
The optimisation of energy consumption in milling has traditionally been undertaken by the population balance modelling (PBM) approach. Some of the parameters used in PBM calculations must be determined experimentally, making this entire process time consuming. As a consequence, DEM has been growing in popularity among researchers in the field, providing significant insights into the operation of pharmaceutical granule milling.

The shape, size and the surface area to volume ratio of the particles are parameters that affect critical properties of the material, such as its solubility.

Drs Krok and Lenihan investigated the fragmentation of bonded particles into DEM granules of different shape and size during the ball milling process and have reported their findings in a recently published paper. The study explores the effect of the rotation speed and other parameters on the breakage behaviour of DEM granules during the ball milling process. One of the conclusions of the study was that the collisions between the balls and the product granules increased proportionally with rotation speed until a critical speed was reached, with mill power also increasing proportionally with rotation speed. The relationship between the number of fragments produced and the milling speed was also linear. 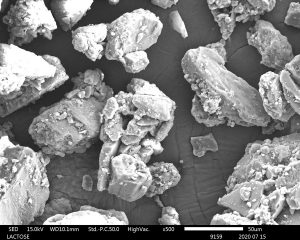 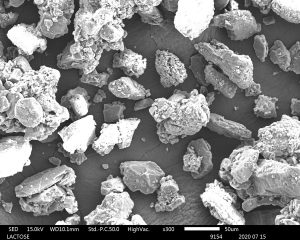 Figure 1. Scanning electron micrographs of granule lactose with magnitudes a) x500 and b) x1000.

Predicting the breakage pattern of the granules
The material used for the study was unlubricated and unsieved granule lactose, an excipient commonly used in the pharmaceutical industry. The granule shape was described taking into account the parameters of sphericity and roundness. In their paper, the researchers defined sphericity as the ratio between the outer and internal diameters of the granules. Roundness indicates the sharpness of particle corners and was defined as the ratio of the average radius of curvature of the corners of a particle to the radius of the maximum inscribed circle. The researchers used a system of equations, so that the granule shape can be determined by the calculated parameters of sphericity and roundness.

A rotation speed of 190 rpm was the most effective milling speed in the study and led to optimal reduction in particle size.

Configuration of the mill drum
In the pilot study, the mill drum was conceived as a steel cylindrical shell with an inner diameter of 50 mm and a depth of 10 mm. The drum was fitted with eight lifters, each measuring 1.2 mm in height and 0.8 mm in width. The milling action was provided by ten steel balls with a density of 7800kg/m3. The number of balls to be employed was carefully optimised, as it was observed that a reduced number of balls is more energy efficient as it produces less over-grinding and reduces power consumption. For their calculations, the researchers conceived the drum as a counter-clockwise rotating cylinder consisting of four individual zones: an ‘empty zone’ in the top left quarter of the cylinder’s section, a ‘dead zone’ at the top of the bottom right quarter, an ‘abrasion zone’, just below the ‘dead zone’ in the bottom right quarter and a ‘high impact zone’ in the bottom left quarter of the cylinder’s section, where the mill balls and granules are in optimal conditions to collide effectively.

Conclusions of the study
Drs Krok and Lenihan, along with their collaborators, conducted a systematic simulation study on the process of pharmaceutical ball milling. The aim of their study was to investigate the parameters that most efficiently reduce the size of granular lactose particles. The commercial software ABAQUS was used to perform the numerical simulation of the ball milling process. The team demonstrated through their DEM approach a strong correlation between the impact speed and the number of fragments, in agreement with previous data published in the scientific literature. A rotation speed of 190 rpm (revolutions per minute) was the most effective milling speed in the study and led to optimal reduction in particle size. Increasing the rotation speed above this value was counterproductive and was characterised by centrifugal motion, which negatively impacted the fragmentation process. On the other hand, lower rotation speeds caused a rolling-cascading particle motion, which was not adequate for effective ball milling. However, the researchers point out that while increasing the rotation speed up to 190 rpm produced the most effective collisions between the granules and the balls, it also significantly increased the calculated power consumption of the milling process.

The computational method developed Drs Krok and Lenihan optimises the quality of the final product, while minimising the costs associated with ball milling. Reducing the size of the granules and ensuring that they are homogeneous with regards to their shape will result in the optimum physical and chemical properties within the desired pharmacological context of the final product.

What are the next steps in your research?
<>We are actively developing high-quality innovative research in two key research areas: process development and drug delivery systems, with the primarily focus being in the pharma sectors. The research activities of both are using advanced methodologies to existing processing problems (granulation, coating), mainly its mechanistic modelling and verification of multiphase and multi-scale robust systems in pharmaceutical engineering by utilising cutting-edge characterisation techniques and visualisation techniques to correctly interpreted and visualize the results from different pharmaceutical units operation.

Dr Alexander Krok graduated with a BSc degree in Organic Chemistry and MSc degree in Chemical Engineering at the Faculty of Chemical and Food Technology (FCHPT-STU, Slovakia). He completed a PhD in Chemical and Process Engineering at the Faculty of Mechanical Engineering, Slovak University of Technology (SjF-STU, Slovakia) in 2011. Currently, he is a Lecturer at Munster Technological University (MTU, Ireland). Dr Krok has significant experience in computational modelling with a deep knowledge of theoretical aspects of chemical and process engineering, powder technology and in pharmaceutical engineering processes.

Dr Sandra Lenihan graduated with a degree in Industrial Chemistry from the University of Limerick (UL, Ireland) while accumulating industrial experience at Eli Lilly and Astellas. Subsequently, Dr Lenihan completed a PhD in Physical Chemistry at UL. She is a Lecturer in Chemical and Biopharmaceutical Engineering and active applied researcher in MTU. Her interests include industrial-academic collaborations in the areas of pharmaceutical formulations, with particular focus on solid dosage processing, physical characterisation, and chemical and biopharmaceutical engineering.

Dr Krok and Dr Lenihan are adopting computational modelling to investigate the mechanism of particle size reduction in ball milling.

This work was supported by the Career-FIT Fellowships, funded through European Union’s Horizon2020 research and innovation programme under the Marie Skłodowska-Curie grant agreement No. 713654.