Engineering & Technology
In an extended programme of research, Dr Gerry Wolff of CognitionResearch.org, with colleagues, has been developing the SP Theory of Intelligence and its realisation in the SP Computer Model – and exploring their potential applications. A unifying principle in this research is that much of human learning, perception, and cognition, may be understood as compression of information. A key development in this research is the powerful concept of SP-multiple-alignment, borrowed and adapted from the concept of ‘multiple sequence alignment’ in bioinformatics.

In an extended programme of research, Dr Gerry Wolff, with colleagues, is developing the SP System, meaning the SP Theory of Intelligence and its realisation in the SP Computer Model. An important part of this research is exploring the potential applications
of the SP System.

The overarching goal is the simplification and integration of observations and concepts across artificial intelligence, mainstream computing, mathematics, and human learning, perception,
and cognition. 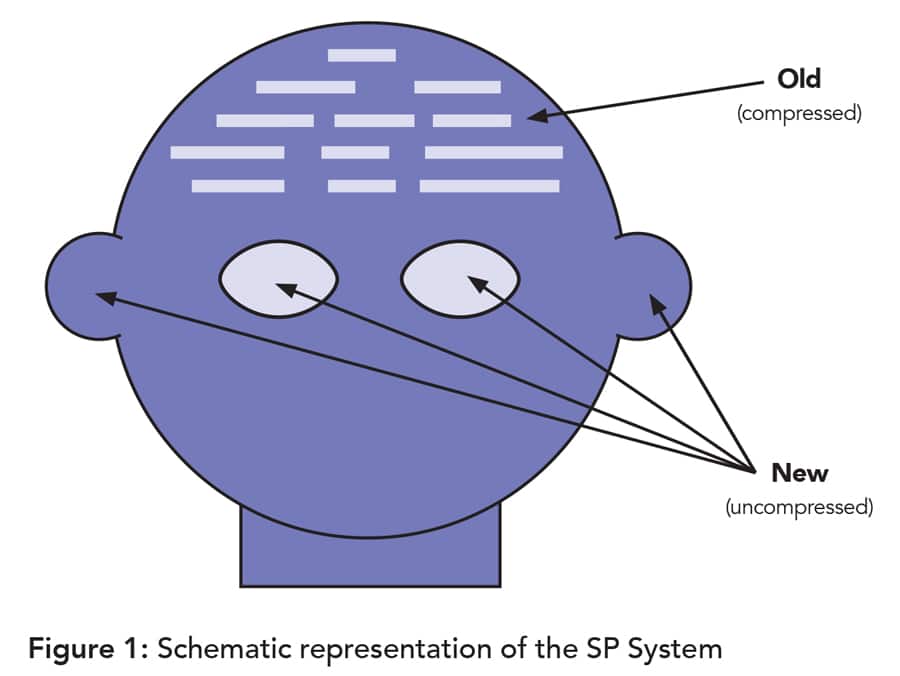 A key idea in this research is that much of human learning, perception, and cognition may be understood as compression of information (more below). The powerful concept of SP-multiple-alignment, borrowed and adapted from the concept of ‘multiple sequence alignment’ in bioinformatics is an important development in this research.

Peer-reviewed papers and other documents about the research are detailed, with download links, on www.cognitionresearch.org/sp.htm.

The SP System
The SP System is conceived as a brain-like system that receives ‘New’ information via its senses and stores some or all of it, in compressed form, as ‘Old’ information, as shown schematically in Figure 1.

There is abundant evidence, described in the first of the 2019 papers under ‘Further reading’, below, that much of human learning, perception, and cognition, may be understood as compression of information. And in many cases, that compression of information may be understood as a process of searching for patterns that match each other and then merging or ‘unifying’ two or more such patterns to make one. The expression “information compression via the matching and unification of patterns” may be shortened to ‘ICMUP’.

Much of human learning, perception, and cognition may be understood as compression of information.

If, when we are looking at something, we close our eyes for a moment and then open them again, we normally see ‘the same’ as what we saw before, as shown schematically in Figure 2. The merging of the ‘before’ and ‘after’ views may be seen as ICMUP. 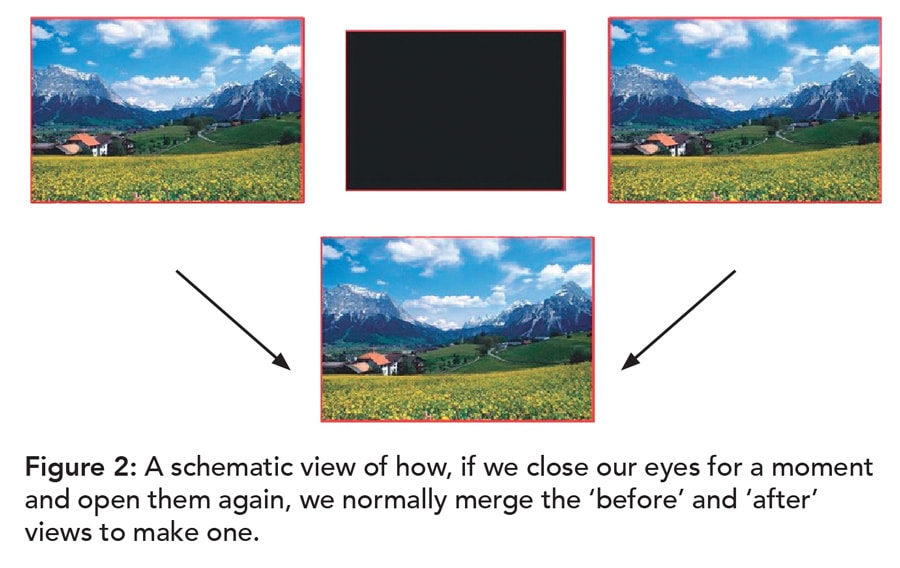 A large part of the workings of the SP System is a process of creating and selecting ‘good’ SP-multiple-alignments like the one shown in Figure 3, which shows how the system may analyse or ‘parse’ a sentence (in row 0) into words and other grammatical structures.2

SP-multiple-alignments can do much more than parse sentences. They are largely responsible for the versatility of the SP System as summarised in the next section.

Information compression is so much embedded in our thinking and seems so natural and obvious that it is easily overlooked.

The SP-multiple-alignment concept has the potential to be as significant for the understanding of intelligence as is DNA in biological sciences. It could prove to be the ‘double helix’ of intelligence. 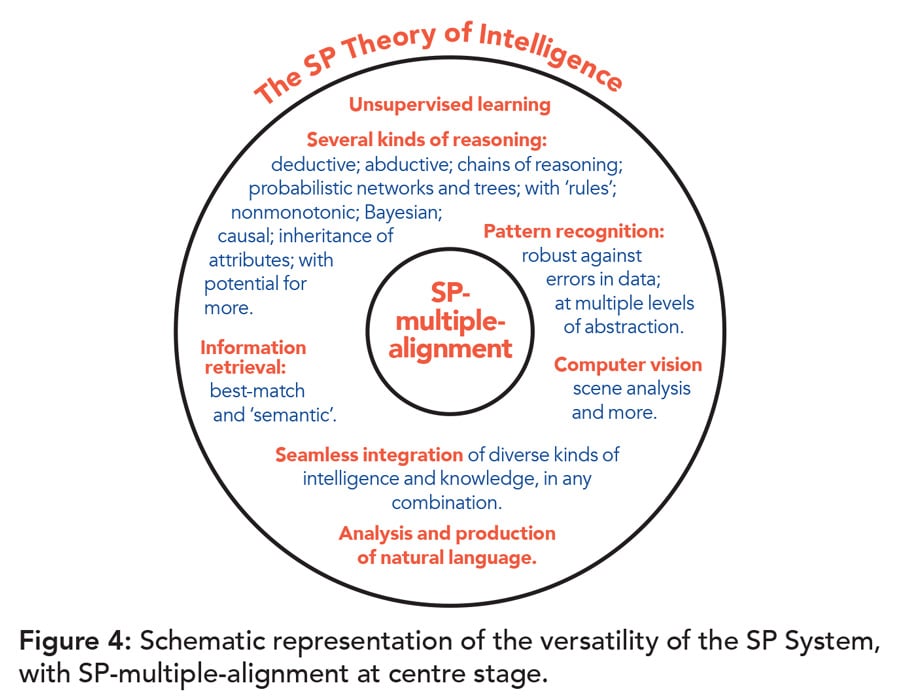 Potential applications of the SP System
The SP System has potential in several areas of application including: helping to solve problems with big data; helping to develop intelligence in autonomous robots; in the processing of natural language; in the development of an intelligent database system; in medical diagnosis; and more. Peer-reviewed papers and other documents about potential applications of the SP System are detailed, with download links, on www.cognitionresearch.org/sp.htm.

SP-Neural
Abstract concepts in the SP System map quite well into SP-Neural, a version of the SP System expressed in terms of neurons and their interconnections, described in the 2016 paper detailed opposite. SP-Neural is quite different from the currently-popular ‘deep neural networks’ (DNNs). 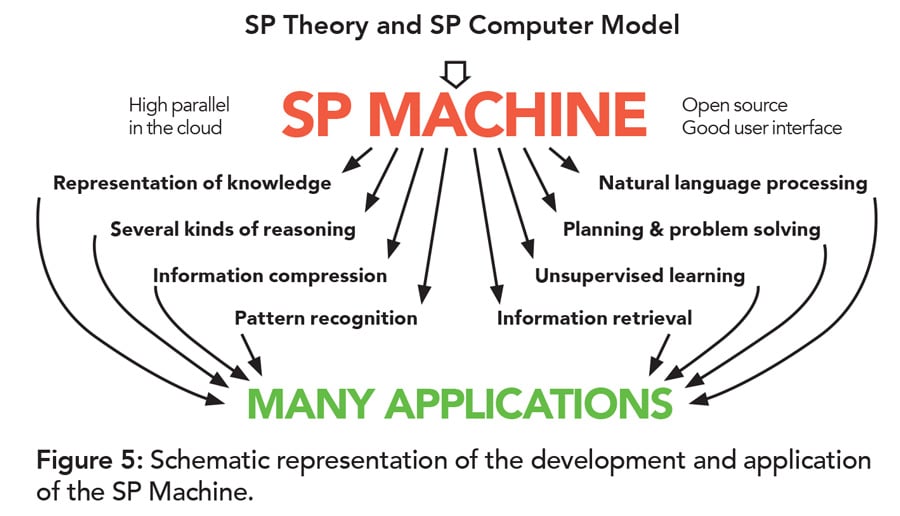 The SP Machine
Dr William J Teahan of Bangor University, Dr Vasile Palade of Coventry University, and Dr Gerry Wolff are aiming to develop the SP Computer Model into an industrial-strength SP Machine, starting with the application of high levels of parallel processing. A paper by Dr Palade and Dr Wolff that describes a roadmap for the development of the SP Machine is detailed under “Further reading”, opposite.

What prompted you to research and develop the SP System?

What do you envisage as the next development of the SP System?

<> As mentioned earlier, three of us are aiming to create a first version of the SP Machine, derived from the SP Computer Model with the application of high levels of parallel processing. A peer-reviewed paper describes a roadmap for the development of an industrial-strength SP Machine.

Endnotes
1 Chunking-with-codes may be seen as an example of ICMUP because, in effect, multiple instances of the relatively large chunk of information have been reduced to one.
2 At present, the SP Computer Model works only with one-dimensional patterns, but it is envisaged that it will be generalised to work with 2D patterns. With relatively large basic symbols such as letters or words, the SP System has the flavour of ‘symbolic AI’. With relatively small basic symbols such as pixels in an image, the SP System may be more like ‘non-symbolic AI’.

Information compression as a unifying principle in human learning, perception, and cognition, and as a foundation for the SP Theory of Intelligence was last modified: October 1st, 2019

Wolff, J. G. (submitted for publication). Unsolved problems in AI, described in the book ‘Architects of Intelligence’ by Martin Ford, and how they may be solved via the SP System, PDF: bit.ly/2th7Bze. Most of the problems described in Martin Ford’s book are problems with DNNs. The SP System provides solutions or potential solutions to most of those problems, and some others. 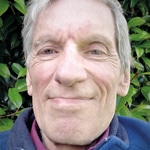 Dr Gerry Wolff
CognitionResearch.org
Menai Bridge
UK
E: jgw@cognitionresearch.org
T: +44 1248 712962
W: A download link for the source code of the latest version of the SP Computer Model (SP71), may be found under the heading ‘SOURCE CODE’ near the bottom of the web page bit.ly/2Gxici2

The School of Computer Science and Electronic Engineering at Bangor University kindly provided an office and research facilities for five years, in support of Dr Wolff’s research.

Dr William J Teahan, Lecturer in Computer Science in the School of Computer Science and Electronic Engineering in Bangor University, and Dr Vasile Palade, Reader in Pervasive Computing in the School of Computing, Electronics and Mathematics in Coventry University, are collaborating with Dr Wolff in the first stages of a project to develop the SP Machine, based on the SP Computer Model with the application of high levels of parallel processing. Dr Palade and Dr Wolff are the authors of a peer-reviewed paper, “A roadmap for the development of the ‘SP Machine’ for artificial intelligence”, with details and a download link under “Further reading”.

Wolff, G, 2019, "Information compression as a unifying principle in human learning, perception, and cognition, and as a foundation for the SP Theory of Intelligence ", Research OUTREACH (109). Available at: https://researchoutreach.org/articles/information-compression-as-a-unifying-principle-in-human-learning-perception-and-cognition-and-as-a-foundation-for-the-sp-theory-of-intelligence (Accessed YYYY/MM/DD)

One thought on “Information compression as a unifying principle in human learning, perception, and cognition, and as a foundation for the SP Theory of Intelligence”