Egyptian youths born into the ‘echo generation’ of 2006–2014 are not yet of working age, but when they do enter the labour market there will be a vast increase in the supply of workers. Professor Ragui Assaad, of the Humphrey School of Public Affairs at the University of Minnesota in the US, has been estimating the effects of this increase. The population and labour force projections show a steep rise in labour supply, and higher levels of educational attainment. This labour force projection also importantly highlights the rise of unsatisfied job expectations in Egypt, with a risk of discouragement for aspiring workers, especially women.

In the 1980s, Egyptian families saw more of their children survive through their early childhood as a result of large drops in mortality from diarrheal diseases. This generation of children came to be known as the ‘youth bulge’. Those children in turn reached their prime childbearing years in the 2010s and even experienced a slight rise in fertility. There is therefore a demographic ‘echo’ of that youth bulge, which can be mapped using population projections anticipating the upcoming wave of new labour-market entrants in Egypt. Labour-force projections can also be developed, which show the echo of the youth bulge generation of children who will soon reach working age in Egypt.

Recent reduced labour supply pressures and lower unemployment rates in Egypt are likely to be temporary, given the projected net annual increase to the labour force from 2025 to 2030. Increased pressure will return with a vengeance, as the upcoming wave of the echo generation reach working age. Professor Ragui Assaad has carried out projections for the labour force in Egypt, to enable labour supply pressures and unemployment rates to be accurately anticipated.

The annual increase in the child population of Egypt has dramatically grown to 785,000/year (2015–2020), the low being 40,000/year in 2000–2005. In time, these children will enter the workforce, likely with higher educational credentials and expectations than their forebears. It follows that some of these hopes will be unfulfilled, leading to a greater proportion of discouraged workers. Rising fertility rates in the late 2000s and early 2010s and higher numbers of elderly people will also have a knock-on effect on dependency ratios.

The temporary reduction in demographic pressure and lower unemployment rates is projected to be a short-term window of opportunity.

Anticipating the future of Egypt’s workforce requires us to look at many complex factors. In order to undertake population and workforce projections, Professor Assaad has examined the UN Population Division’s 2019 projections, the Egypt Labor Market Panel Survey (which has cross-sectional data on the education composition of the population in waves for 1988, 1998, 2006, and 2018), and the Egyptian Labour Force Survey 2000–2017, which provides data on labour-force participation by age, sex, and education.

The population was divided into males and females, ten age groups, and four educational categories: No Certificate; Basic, which includes both primary and lower secondary; Secondary, including upper secondary and two years post-secondary; and University or above, which includes four-year university degrees and above. Working with 11 time periods (for every five years from 2000 to 2050), three projection variants, and two alternative assumptions on trends in labour-force participation, this produced 5280 cells of data. The working-age population can therefore be projected, using low, medium, and high variants. Until 2035 there is a high degree of congruity as the individuals were born by 2020, but thereafter these projections differ.

Who will be the workers of the future?

Labour-force participation also requires examination of different factors. The official data on Egypt’s unemployment rates does not include job seekers who are discouraged and no longer actively searching for work – even though these people are available for work and desire to work. Women are especially likely to be in this group, and particularly those with secondary/post-secondary educational attainment. Between 2012 and 2018 the rate of discouraged unemployment increased from 2.1% to 8.3% of the female labour force, and from 0.5% to 0.9% for the male labour force. Many women simply drop out of the labour force after a period of unemployment, prior to marriage.

Part of the explanation for the high discouragement rate for women is a reduction in public sector employment for intermediate skilled workers, with the reduction in opportunities especially pertinent when it comes to educated married women. The private sector has not provided as many jobs as the public sector previously did, and is not as hospitable a source of employment for married women. The result is that women who would have previously worked in the public sector are now discouraged, with an impact on their employment statistics. However, more highly educated women participate in the labour market at a higher rate and it is anticipated that the current decline in women’s employment will tail off, resulting in a stabilisation of the participation rate in the labour market.

Dependency is another factor. The Egyptian population is projected to include an increasing proportion of both children and elderly people, and the ratio of dependents to working age people is directly related to labour supply. By 2050, Professor Assaad calculates that the population aged 65+ will have increased by 2.8 times, and the near-elderly (aged 60–64) by 2.3 times, compared to their 2020 numbers.

As Egyptian fertility rates had been declining, once the youth bulge generation entered the workforce, the generation that succeeded it was smaller, leading to reduced pressures on the Egyptian labour market and the fall in the growth of the youth and young-adult populations (the two groups that are most susceptible to unemployment in Egypt). Besides the fact that the youth bulge generation reached prime childbearing age in the mid 2000s, there has been an unexpected reversal in fertility trends, leading to a large ‘echo’ of the youth bulge. The total fertility rate was 3.0 children per woman in 2008, but rose to 3.5 in 2014. This coming of age of the echo generation means that demographic pressures on the labour market will inevitably return and the growth of the labour force will accelerate substantially from the current lower rates. These renewed labour supply pressures will recall the youth bulge generation’s experience when they reached working age in the early-mid 2000s.

The echo generation are in general better educated than their predecessors. By 2050, around half are anticipated to have a secondary qualification, and 27% to have a university degree. Given the higher likelihood of unemployment associated with first entry to the labour market with these levels of education in Egypt, there is a potential impact on unemployment rates. Calculating potential age at entry into the labour force has an impact on the dependency ratio, and due to increased education and delayed entry to the labour force, the young dependency ratio sometimes includes older adolescents and youth. However, the projections indicate that the dependency ratio will not decline until the echo generation exit the dependent age range.

Professor Assaad has developed two alternative projections of the labour force based on alternative assumptions on the future trend in participation rates. By 2050 these diverge by about 5% (2.5 million individuals), which largely represents divergent calculations for female labour-force involvement – a factor accounting for about two-thirds of the difference. The trend projection method suggests the participation of women with secondary/post-secondary qualifications continues to drop, resulting in lower numbers. However, Professor Assaad prefers the ‘moving average method’, which anticipates that the decline in participation will stop and will produce a larger increase in labour-force growth.

Low unemployment: for how long?

Egyptian employment to population ratios are impacted by labour supply. In 2010, prior to the revolution, there was a high of 47.8%. By 2019, this had decreased to 38.5%, with GDP growth of 5.5% and an unemployment rate of 7.8%. This respite from the pressures of labour supply is, however, likely to be transitory as the echo generation become adults and start seeking work. The temporary reduction in demographic pressure and lower unemployment rates is projected to be a short-term window of opportunity.

Currently, the working-age population is anticipated to be growing by 1.7% per annum (2020–2025) and this will accelerate to 2.2% by 2025–2030, representing the coming of age of the echo generation. The current, lower, rate of growth has eased labour supply pressure and that has an impact on unemployment rates, but the growth of the youth population is projected to resume with a vengeance. This working-age population has been increasing by just over a million people a year (2010–2025) but the increase is anticipated to reach 1.6 million a year in 2025–2035 before reverting to about a million again by 2045–2050. This again reflects the echo generation who will reach working age and seek employment.

To keep unemployment and discouragement rates constant during the upcoming decade, Egypt will have to seek growth in employment. Employment growth of around 2.7% a year, and therefore GDP growth of at least 6% a year, would be needed for Egypt to absorb the existing stock of unemployed and discouraged potential workers and accommodate the projected increased labour supply. Job quality is also an important factor as educated new entrants to the labour market are likely to have higher aspirations than their forebears.

Job creation is therefore likely to be a vitally important factor for Egypt in the near future, as population and labour-force projections indicate the impact of the demographic echo will be large numbers of educated youths seeking to enter the workforce. The research and predictions of Professor Assaad facilitate a more accurate understanding of the Egyptian labour market, and enable us to anticipate the changing nature of employment going forward.

What challenges does COVID-19 pose for developing projections?

Projections are based on long-term trends in demographic behaviour, educational composition, and labour-force participation behaviour. While COVID has potentially caused short-term disruptions in all of these variables, it is unlikely to change their long-term trend and thus cause substantial changes in the projections. It is more like a bump in the road rather than a permanent change in direction or speed. We may, however, want to exclude data for the years that were strongly affected by COVID (2020 and possibly 2021) when estimating the long-term trends. 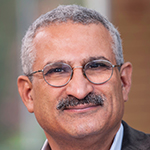 Ragui Assaad is professor at the Humphrey School of Public Affairs at the University of Minnesota. Assaad’s research focuses on labour markets and human development in the Arab World, with a focus on education, transition from school-to-work, labour-force participation, gender and work, employment and unemployment, and family formation.

Professor Ragui Assaad researches Egyptian labour-force growth as a result of the coming of age of the ‘echo generation’.