Mary Ann Bruns is Associate Professor of Soil Microbiology in the Department of Ecosystem Science and Management at Penn State University. The Bruns research group aims to understand how beneficial functions of soil microorganisms can be promoted through better management of agricultural and mining-impacted lands. The group focuses on microbial processes important in nutrient cycling and water retention. Their goal is to identify practices (Fig 1) which sustain microbially assisted delivery of water and nutrients to plants and result in more cost-effective and lasting restoration.

Humans have drastically transformed Earth’s protective soil layers, with agriculture and mining being among the most damaging land uses. Severe disturbances to soils result in their failure to hold water and recycle nutrients, two critical soil functions to mitigate biogeochemical and hydrological imbalances on a global scale. Bruns explains: “Well-established interactions among plant roots, fungi, bacteria and micro- and macrofauna are all destroyed once vegetation is removed and soil is upturned, buried, or eroded away. We want to know how functional microbial-root networks can be brought back most effectively in altered soils to improve nutrient recycling, water retention, and plant productivity.”

Agricultural and mining-impacted soils differ not only in nutrient and water availability for plants, they provide starkly contrasting habitats for microbial life. Bruns’s team aims to learn how microbe-informed management for both types of soil systems can enhance soil functionality by improving living conditions for microbes. They define functionality as the soil’s biologically driven ability to capture, retain, and recycle water and nutrients.

The team’s restoration research recognises that soil functionality depends on sustaining microbial viability and activity. A schematic from their recent paper (Fig. 2) depicts how microbe-informed soil management can promote beneficial microbial processes through reduced disturbance and continued provision of organic residues. Here, we take a closer look at their research which states the case for taking microbes into account when managing agricultural and mining-impacted soils, respectively. 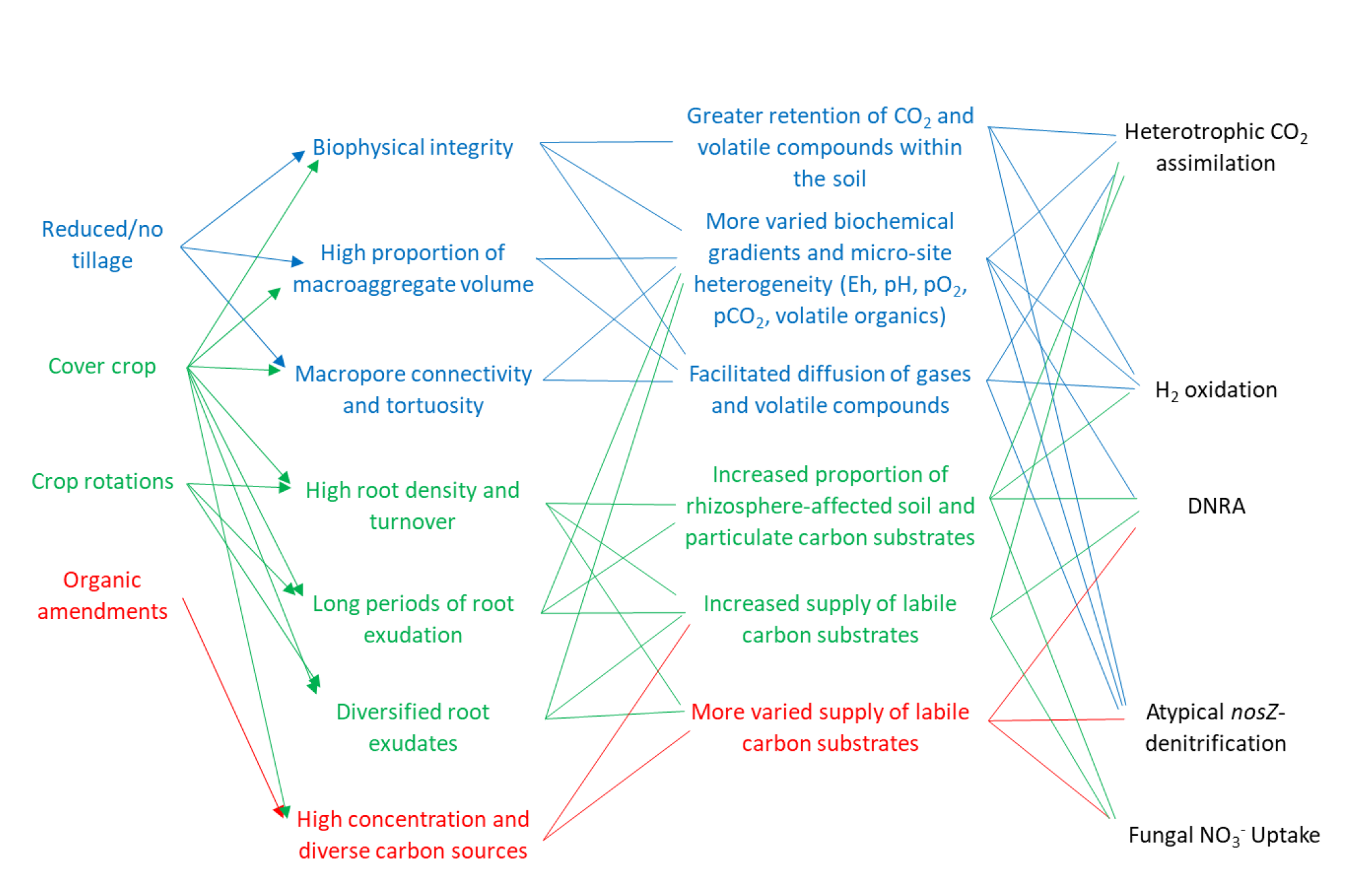 Restoring bio-functions to agricultural soils
Before being converted to agriculture, soils are endowed with vital stocks of organic matter, a dark, amorphous substance built up over decades, if not centuries, by microbial decomposition of plant, animal, and microbial residues. Agricultural crop harvesting, however, prevents most plant residues from being returned to the soil, and tillage (e.g., plowing) disrupts and aerates soils, causing rapid microbial oxidation of organic matter. These practices, combined with wind and water erosion, have caused native organic matter stocks to be lowered by half in agricultural soils worldwide.

The Bruns group is particularly interested in the relationship between soil functionality and predominant forms of plant-available nitrogen (N). They propose that N in its less mobile forms (i.e., ammonium, amino acids, proteins) predominate in well-functioning soils, resulting in longer soil N residence times and increased probability of crop N uptake. An example of a potentially beneficial process under study is the microbial conversion of highly mobile nitrates to ammonium.

Bruns hypothesises that moister, more energy-rich conditions in soils will enhance the abilities of soil microbes to retain N in its less mobile forms and keep it from being lost so quickly to the environment. This is an important goal for improving soil functionality, because on average, less than 50% of fertilizer N is taken up by agricultural crops worldwide.

Restoring productivity to mining-impacted lands
In the U.S. Appalachian region, strip mining to access near-surface coal seams has impacted millions of hectares. Although government legislation in the 1970s mandated reclamation of strip-mined lands, legal requirements are based on minimum plant cover rather than on soil properties, with the result that previous levels of land productivity are rarely achieved post-reclamation. Poor plant productivity persists because soils are mostly comprised of rocky subsoils that have been stockpiled and redistributed. Microbes in these soils have extremely poor living conditions, with very low organic matter and little access to water and air due to heavy compaction by equipment.

Whereas strip-mined lands are extensive in area, smaller “kill zones” result when highly acidic mine waters burst out of abandoned underground mines. As mineral-rich acid mine drainage (AMD) emerges and flows overland, acidic metal precipitates are deposited on the land, killing all vegetation in its wake. A characteristic feature of a barren kill zone is a red-orange surface layer of iron oxide precipitates (below pH 3) that prohibits vascular plant growth. Left unattended, kill zones remain barren for decades, only permitting growth of acid-tolerant mosses or lichens.

Bruns and her team have conducted research on an accessible AMD barrens in the Appalachian Plateau about 100 km from her university (Fig. 4). Most of the barrens is no longer inundated and comprises three zones differing in thickness of AMD precipitates and depth to water table.

In 2006 her team applied one reclamation method to test plots in all three zones. To promote stronger interactions between microbes and roots, the team avoided use of high-N fertilizers in favour of compost and a first-year nurse crop of oats. These amendments were intended to enable greater establishment of plant-microbe symbioses by stimulating microbial activity with organic carbon and releasing mineral nutrients more slowly.

Countering expectations, all plots were successfully revegetated, although each zone supported very different plant communities. Their treatment proved effective, even in the most contaminated and waterlogged sites. Despite their differing levels of acidity, mineralogy and hydrology, all reclaimed plots met mine reclamation requirements by retaining 80 to 100 % plant cover over five years. The team concluded that even severely acidified sites were recoverable. Their research has important implications for local communities, often left with the responsibility of restoring contaminated land. Success of relatively simple, inexpensive techniques is achievable on a local scale.

Conclusions
To improve soil functionality, we can make the most of resident soil microbes by ameliorating their living conditions, providing sufficient, but not excessive, food, air, water and minimising habitat disruption. Bruns’ research has important real-world applications for remediating poorly functioning soils and improving soil quality and productivity. Her use of all aspects of a soil system from its biogeochemistry to its microbial community allows her to apply highly effective restoration and improvement methods. The group’s future work will focus on how their laboratory and field studies can be scaled up to larger areas under more varied environmental conditions.

Cyanobacterial consortia as bio-fertilisers and soil conditioners
Building on the idea that important soil microbial processes need more research attention, Bruns and her former PhD student Xin Peng investigated use of a biofertilizer using photosynthetic, cyanobacteria capable of N2 fixation (i.e., converting N2 gas from the air to mineral N that plant roots can absorb and use). After observing recurrent cyanobacterial growth on surfaces of local agricultural fields for years (Fig. 5), Bruns obtained a Research Innovation grant from the PSU College of Agricultural Sciences to develop DG1, a robust consortium of local cyanobacteria and nonphotosynthetic bacteria for application to soil surfaces. DG1 was shown to fix N2 but not in amounts that would be sufficient for serving the N needs of crops like maize. Nevertheless, DG1 was shown to provide other ecosystem services such as surface stabilization, water retention, and erosion control. To demonstrate DG1’s capabilities, Peng showed that 2-3 days’ growth of DG1 on N-fertilized soil microcosms resulted in 50–70% more soil nitrate retained after simulated rainfall, compared to non-inoculated soils. Smaller DG1 additions (< 5 mg biomass m-2) were more effective than more dense applications, enabling larger areas to be treated. Peng thus showed that cyanobacterial consortia can modulate soil N, either by fixing N2 under N-limited conditions or by immobilizing nitrate when concentrations are higher.

<> An estimated half million acres of strip-mined lands exist in the Commonwealth of Pennsylvania alone. Although many of these areas had been previously farmed, they are no longer agriculturally productive. We are evaluating practices that will improve soil properties to enhance soil microbial activity and restore soil bio-function so that these lands can be productive again.

What tools do you use to evaluate soil bio-functionality?

<> Some ways to evaluate soil bio-functionality can be done with “snap-shot” field observations of water infiltration rate, soil colour, soil aggregation, and crop vigor. Guidance on these methods can be obtained from the USDA’s Soil Health Division of the Natural Resources Conservation Service. However, learning about the invisible microbial communities that make soils bio-functional is an extraordinary challenge. Our work links bio-functionality measurements with biochemical and DNA-based analyses of microbial diversity and specific genes that code for the bacterial enzymes we are interested in. Although high-throughput DNA sequencing makes it possible to obtain comprehensive information about the soil microbiome, many analyses are needed to verify the effects of management on soil microbiomes across landscapes over time. DNA methods are best used in combination with soil process measurements.

Making the most of microbes for soil restoration and function was last modified: October 3rd, 2019 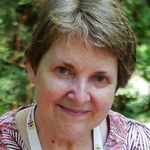 Dr Mary Ann Bruns received her PhD in Crop and Soil Sciences from Michigan State University in 1996, where she was a graduate fellow in the Center for Microbial Ecology. She is now Associate Professor in the Department of Ecosystem Science and Management at Penn State University, teaching courses in soil ecology and soil microbiology.

Bruns, M.A., 2019, "Making the most of microbes for soil restoration and function", Research OUTREACH (108). Available at: https://researchoutreach.org/articles/making-the-most-of-microbes-for-soil-restoration-and-function (Accessed YYYY/MM/DD)