Health & Medicine
Due to reduced levels of physical activity in children with cerebral palsy or other neurodisabilities, there is a risk of tube-fed individuals becoming overweight or obese if their feed contains an excess of calories. Nestlé Health Science provide a nutritionally complete, lower energy formula, Peptamen® Junior 0.6, that can be used to overcome this problem. Peptamen® Junior 0.6 is a well tolerated, low-energy, peptide-based feed with fibre that has been shown to reduce gastrointestinal symptoms in children with neurological impairment.

Neurodisability describes a family of congenital or acquired chronic, long-term conditions that can be attributed to impairment of the brain or neuromuscular system. In the UK, neurodevelopmental conditions are the most common cause of disability in children, estimated to affect around 3-4% of children (Allard et al, 2014).

Children with complex neurodisabilities, such as cerebral palsy, often have difficulties with eating and drinking. In some cases, they rely on a feeding tube inserted into their stomach to meet their nutrition and hydration needs. Sometimes the tube is used to supplement food already being eaten by the child if there are concerns that they are unable to meet their nutritional requirements for healthy growth, or if there are dangers to health such as choking on food or food going into the airway (aspiration). For other children, all of their nutrition is delivered via the tube. Each individual will have different nutritional requirements, based on a variety of different factors, including age, gender and level of physical activity. 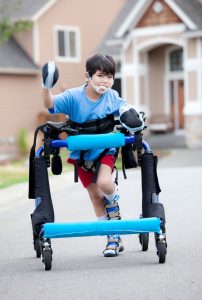 As some children with neurodisabilities have restricted mobility and lower levels of physical activity, they expend less energy and therefore need a tube feed with fewer calories than a child with higher levels of activity. Other examples of patient groups with reduced metabolic rates include children with brain injuries, and those affected by genetic, metabolic or neurodegenerative diseases.

Studies have also shown that nutritional requirements in tube-fed children are often over-estimated, resulting in accumulation of body fat, or disproportionate storage of body fat, rather than normal growth and weight gain (Riley & Vadeboncoeur, 2012). This can also increase the risk of other comorbidities. Carrying additional weight can have consequences for the child’s health and it also impacts on day-to-day activities at a more practical level, such as the ability of the carer to mobilise and support the child.

Furthermore, gastrointestinal intolerance is more common in children with neurodisabilities, including symptoms of reflux, vomiting and regurgitation (Minor et al, 2016). This may be in part due to the effect of cognitive changes on the digestive process but may also be linked to the functional effects of neuromuscular disorders. In children with cerebral palsy, around 67% of children who experience reflux also have delayed gastric emptying of liquids (Del Giudice et al, 1999), meaning that some liquid tube feeds may sit in the stomach for prolonged periods of time, instead of being absorbed and utilised by the body.

Therefore, in order to prevent excessive weight gain and to manage intolerance issues, this patient group are likely to benefit from a low-energy tube feed which is easy to tolerate, digest and absorb. It is important that nutritional support is given by a dietitian and that suitable tube feeds are administered via the feeding tube.

The formula, which is 100% partially hydrolysed whey protein, also contains omega-3 fatty acids – important for brain function and development – and fibre – important for digestion and cardiovascular health (Threapleton et al, 2013). Whey peptide formulas have been shown to have beneficial effects on gastric emptying time compared to formulas that contain another form of milk protein called casein. Improved gastric emptying may result in better absorption of nutrients from the feed, as well as relief from symptoms such as abdominal distension, bloating, nausea and reflux. Fibre is well known for its beneficial effects on healthy bowel habits, as well as providing a food source for the ‘good’ bacteria that live in the gastrointestinal tract.

As well as being a peptide-based feed, Peptamen Junior 0.6® contains fats in the form of medium chain triglycerides, which are more easily digested than longer chain fats. The formula is also designed to minimise the likelihood of children experiencing a particular kind of diarrhoea, known as osmotic diarrhoea. Osmotic diarrhoea occurs when the intestine cannot absorb enough water out of the gut contents. Peptamen’s low ‘osmolarity’ (fewer particles per litre of solution) help reduce this complication.

Peptamen® Junior 0.6, developed by Nestlé Health Science, is one such tube feed that is well tolerated and easily absorbed.

A 2020 study (Thornton-Wood & Saduera) evaluated the acceptability, gastrointestinal tolerance and compliance of a low-calorie, peptide-based paediatric tube feed formula in tube-fed children with a range of neurodisabilities, aged 1–11 years. Although only a small number of participants were included in the study, Peptamen® Junior 0.6 was well tolerated by the majority of subjects (seven out of nine children). In addition, all seven children received the full amount of their prescribed volume of feed. This low-calorie formula thus offers a useful option for ensuring that the full nutritional needs of children with low energy requirements are fulfilled. This study demonstrates that compared to normal tube feeds, a lower energy peptide feed is well tolerated in children with cerebral palsy or other neurodisabilities.

A retrospective study has also demonstrated that when swapped from a whole-protein feed to a feed from the Peptamen® range, 92% of the 13 children included in the study experienced improved feeding tolerance (Minor et al, 2016). The study reported decreased episodes of diarrhoea, vomiting, gagging and retching, and constipation on switching to the peptide-based feed.

International guidelines
International guidelines also recognise the problem of potential obesity and feed intolerance in tube-fed immobile children with neurological impairment. Indeed, the European Society for Paediatric Gastroenterology, Hepatology and Nutrition (ESPGHAN) advocate the use of low-fat, low-calorie, high-fibre and micronutrient-complete tube feeds for this patient group. The guidelines also recommend the use of whey-based formulas in children who experience symptoms of reflux, gagging, and retching (Romano et al, 2017).

There are further options from the Peptamen® range which could be utilised for children with neurodisabilities who are more mobile and so require a standard or high-calorie feed. For example, ESPGHAN guidelines suggest a high-calorie formula containing fibre for children who are unable to tolerate large volumes of feed; Peptamen® Junior Advance offers a potential tube-feed option for these children.

Current challenges
Given the mobility restrictions of many children with neurological impairment, specialist weighing equipment is often required. However, visits by healthcare professionals often take place within the home where access to this equipment is limited. These patient groups are also currently likely to be shielding secondary to COVID-19 restrictions, adding a further barrier to face-to-face consultations. These difficulties make it harder to monitor weight in these patient groups, increasing the likelihood that changes will be missed.

Peptamen® Junior 0.6 provides one tube-feed option in a dietitian’s toolkit that delivers all the nutrients a child needs, but with a lower energy content to avoid excessive weight gain. It can also be prescribed to help manage tolerance issues, providing a ‘go-to’ feed for children with neurodisabilities with lower energy requirements and/or tolerance issues.

Nestlé Health Science are committed to optimising nutrition for children with neurodisabilities. The team are actively pursuing further strategies for the nutritional management of this group in order to improve their quality of life and physical health.

It is not just children who can benefit from Peptamen®; the range from Nestlé Health Science also includes formulas that can be utilised for adults who experience issues with other tube feeds, most commonly due to impaired gastrointestinal function.