Sensors are the eyes, ears, and noses of autonomous devices. Whether it’s designed to operate on land, in the air or on ground, any autonomous device needs a huge array of sensors to provide real-time information to maneuver or perform more complex tasks. The challenge is making sensors small and light enough that they do not add bulk to the device. Dr Hengky Chandrahalim and Captain Jeremiah Williams at the US Air Force Institute of Technology have been finding ways to use multiphoton polymerization to make microscale optomechanical sensors for just this purpose, achieving monolithic integration of the sensor with the data-transfer medium – in this case an optical fiber.

A sensor is any device that produces a signal in response to a change in its environment. Nearly all modern technologies contain some form of sensor. When combined with control circuits, sensors can be used to make devices that respond in a particular way to external changes – for example, a temperature sensor that causes a kettle to power off once the water has reached a certain temperature.

Sensors can range from relatively simple to sophisticated networks of sensors that measure different information that is used synergistically for more complex actions. Autonomous robots that can move and act independently of direct controls are one such example of how complex sensor networks can be used. Even just simple movement will mean that the robot needs sufficient information from the sensor network to understand where it is, what obstacles are nearby and how to move in its local environment. 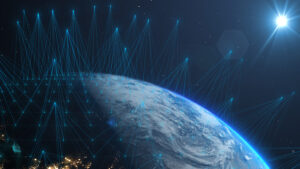 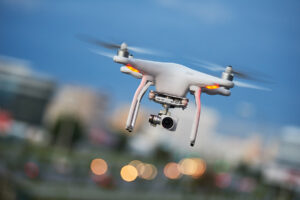 Autonomous technologies are very appealing as unmanned vehicles can be used to access regions that are unsafe for humans. Following the Fukushima nuclear incident, where radioactive material had begun to leak from damaged reactors, robots formed a significant part of the emergency response and have inspired the development of a new generation of more sophisticated autonomous technologies. While not entirely immune to the damaging effects of elevated radiation levels, robots could be used for environmental monitoring as well as repair work and the removal of debris.

Their devices are miniature machines with a number of different moving parts and will bring new possibilities for optomechanical sensing.

The more independent an autonomous vehicle or device is to become, the more sensors it needs, and this poses a problem for devices that are not designed to be connected to a continuous power supply. Any additional mass means more work and energy consumption to get the device to move, and any large sensors add bulk, which may cause issues with aerodynamics and the streamlining.

In the search for highly compact yet highly accurate sensors, Dr Hengky Chandrahalim and Captain Jeremiah Williams at the US Air Force Institute of Technology have been developing new fabrication methods using multiphoton polymerization to create sensors that are smaller than a human hair. Their microscale devices – miniature machines with a number of different moving parts – will bring new possibilities for optomechanical sensing. 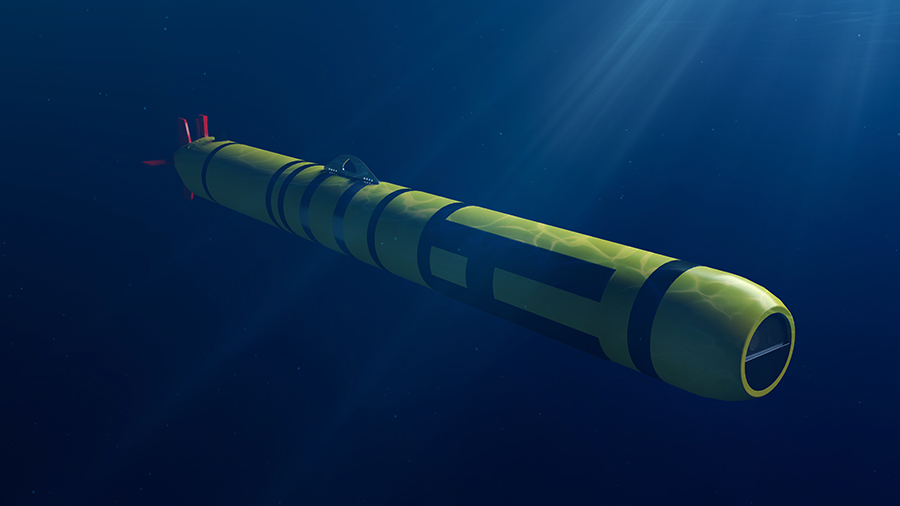 Chandrahalim and Williams’s new fiber-tip sensor is smaller than 100μm x 100μm x 100μm in volume. But such a small footprint comes with complications, and objects this small begin to have unusual interactions with visible light.
Nanoscale materials can be used to shape and use light in a similar way to how electrical circuits use electrons – the particles that carry electrical charge. Being able to control and use light like this paves the way to optoelectronic devices that manipulate light in a similar way to electrical circuits.

The advantage of making devices that use light rather than electrical charge is that light pulses are faster to transmit and can carry more information – hence why fiber optic cables have become the standard in the telecommunications industry. A huge challenge, however, is creating the microscale machines with the right architecture to be able to do this.

Fabrication techniques that work at such small scales and have sufficient accuracy and quality to make useful devices have been very limited. Now, Chandrahalim, Williams and their team have developed a new tool to make miniature optical cavities that can act as highly accurate sensors, monolithically integrated onto a flexible platform that can transmit the detected information to the signal processor unit or larger subsystems.

When a material or molecule is exposed to light, it may absorb some of the electromagnetic radiation. This is how solar panels and photovoltaic devices work. However, if a material is exposed to an incredibly intense light source, like femtosecond laser pulses, it may absorb multiple photons that have a longer wavelength in place of a single ultraviolet photon.

Chandrahalim and Williams have been using multiphoton absorption to trigger polymerization – the photochemical process to induce a dramatic change in the solubility of the photosensitive resin for appropriate developers; based on a computer-aided design file, the laser pulses solidify the desired part of the resin while the unexposed areas are removed by a chemical developer specific to that resin.

Thanks to the precision with which they can trigger the polymerization process, the team have been able to create very complex 3D architectures on optical fibre tips that can be used to make sensors.

Previously, achieving such a high spatial resolution to create such small objects had been incredibly challenging, but the team found with their new methodology they were able to successfully make working sensors at this scale. ‘Our cavity sensors have true 3D features and are monolithically integrated on the optical fiber tip,’ explains Chandrahalim.

In a new research paper, Chandrahalim and Williams build on their previous work to further explore the potential of their multiphoton nanomachining process to create truly 3D optical resonant and non-resonant microsensors. The new miniature devices have been developed to sense pressure and flow respectively: a resonant sensor with a Fabry–Pérot cavity and a spring body, and a non-resonant sensor comprising a miniature turbine which spins in response to an incident flow.

A Fabry–Pérot cavity is formed of two reflective surfaces which reflect most of the light between them that enters the cavity, but some small component is transmitted. The frequency of the cavity can be tuned by changing the distance between the mirrors and so only certain frequencies of light can be accepted.

Fabry–Pérot cavities are therefore highly selective sensors, but achieving a high-fidelity cavity – where little light is lost through the reflective surfaces – has been incredibly challenging. The team’s new manufacturing methods have allowed them to achieve this, including finding ways to coat the internal surfaces of the cavity using a slightly different approach to a metal coating technique called sputtering.

To add to the complexity of this miniature machine, the team made it possible to open and close the first mirror of the optical cavity so that it could be opened for the sputtering process to take place, and then closed again when it was complete. This meant creating additional miniature components to act essentially as a hinge and a motor for the reflective end cavity mirrors. Achieving a truly 3D spring body under the moveable mirror was an extremely challenging process which is not possible with standard photolithography methods. 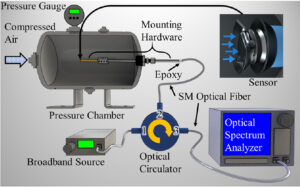 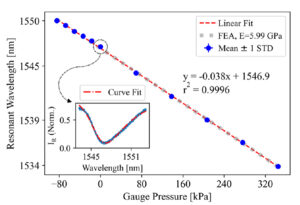 Another challenge in the design was making sure that the hinging motion did not lead to any distortion of the mirror that would have also been detrimental to the quality of the cavity. Any tension on optics can cause distortions in the surface which affects the reflective qualities of the mirror and so the 3D spring body used for the displacement had to balance being strong enough to move the mirror and sufficiently sensitive to not change its shape at all.

By attaching the sensor to a broadband source with an optical circulator and optical spectrum analyser, the researchers were able to accurately monitor pressures of 38pm/kPa over a range of -80 to 345kPa. All of this can be achieved by transmitting information with light and analysing the changes in the spectrum to work out the original pressure change.
The wide range of pressure means these optical fibre sensors are suitable for applications such as aerospace and aviation where the sensor will experience relatively extreme changes in conditions.

Researchers and engineers have a new tool to make miniature optical cavities that can act as highly accurate sensors.

‘The non-resonant microsensor consists of microblades that spin in response to an incident flow,’ Chandrahalim explains. ‘Light exiting the core of the optical fiber is reflected back into the fiber core at a flow-dependent rate as the blades pass by.’

Chandrahalim and Williams tested their new, ultracompact flow meter to measure flow rates of nitrogen. The turbine, invisible to the human eye, can be used to measure flow of 9–15 litres per minute and remains linear over a range of 10–12 litres per minute. Linearity is very important in sensing technologies as a linear response of a detector means the signal strength scales proportionally with the magnitude of the effect being measured. While non-linearities can be corrected for, the relationship between the measured response and the true signal becomes much more complex and is generally undesirable for sensing applications. 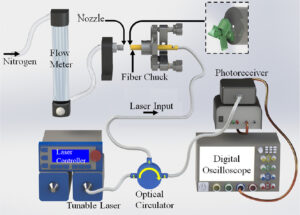 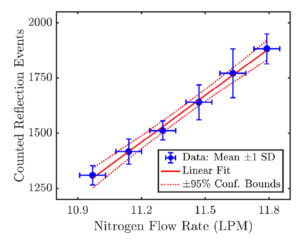 ‘Creating true 3D features with the level of spatial resolution we have achieved is very challenging if not impossible using standard planar nanofabrication processes,’ Chandrahalim concludes. With the team’s groundbreaking multiphoton nanomachining process and successful fabrication of 3D mechanically assisted resonant and non-resonant microsensors, there is hope that they will be the next generation of eyes and ears for high-performance agile devices.

What specific applications are you most excited about targeting with your new sensors?

Monolithically integrated 3D optomechanical modules on optical fiber tips represent a highly favourable approach to scale down a variety of innovative sensors that are required in modern engineering systems. These optomechanical microsystems are ready to be integrated with higher-level systems that have stringent spatial requirements, such as such as autonomous underwater vehicle, micro-satellites, and unmanned aerial systems.
Manufacturing on the nanoscale: Optomechanical sensors with multiphoton polymerization was last modified: December 2nd, 2022 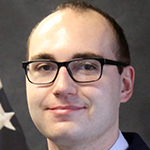 Captain Jeremiah Williams was the student lead of this work. He is currently an electronic device engineer in Sensors Directorate of the Air Force Research Laboratory. 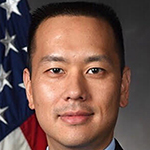 Dr Hengky Chandrahalim is a faculty in the Department of Electrical and Computer Engineering at the US Air Force Institute of Technology (AFIT). He is the director of the AFIT Nanofabrication & Characterization Facility and an editorial board member of Royal Society Open Science.