Physical Sciences
Understanding systems of many interacting quantum particles remains one of the grand challenges in physics. Simulating such systems on supercomputers is impossible for more than a few particles, but promising approaches based on quantum simulators are on the horizon.
Dr Sebastian Blatt’s team at the Max-Planck-Institute of Quantum Optics, and their collaborators, have made significant strides to extend the capabilities of quantum simulators by combining orderly arrays of trapped atoms with the world’s best atomic clocks and a cutting-edge microscope.


The quantum many-body problem is one of the most notorious challenges in physics: if three or more particles interact according to the laws of quantum mechanics, predicting their behaviour quickly becomes too complex to handle. The main reason for this complexity is the principle of quantum entanglement, through which the fate of one particle can be intrinsically linked to any other in the system, even if they are separated by large distances.

Classical computers are limited when it comes to treating complex systems involving entanglement. These limitations are well illustrated by the oriental story of the king’s advisor who requested the king to pay him in rice grains. He asked the king to place a single grain of rice on the first square of a chessboard, and to proceed by doubling the number of grains for each successive square until the chessboard was full. The king found out very quickly that he could not possibly pay the bill. Even today, it would take hundreds of years for Earth to produce enough rice to pay the advisor – a classic example of the exponential scaling problem. Classical computer simulations of quantum particles have the same problem, because adding an extra quantum particle to the simulation requires doubling the amount of computer memory. This problem makes it impossible to perform exact simulations of more than a few quantum particles on even the most advanced supercomputer. 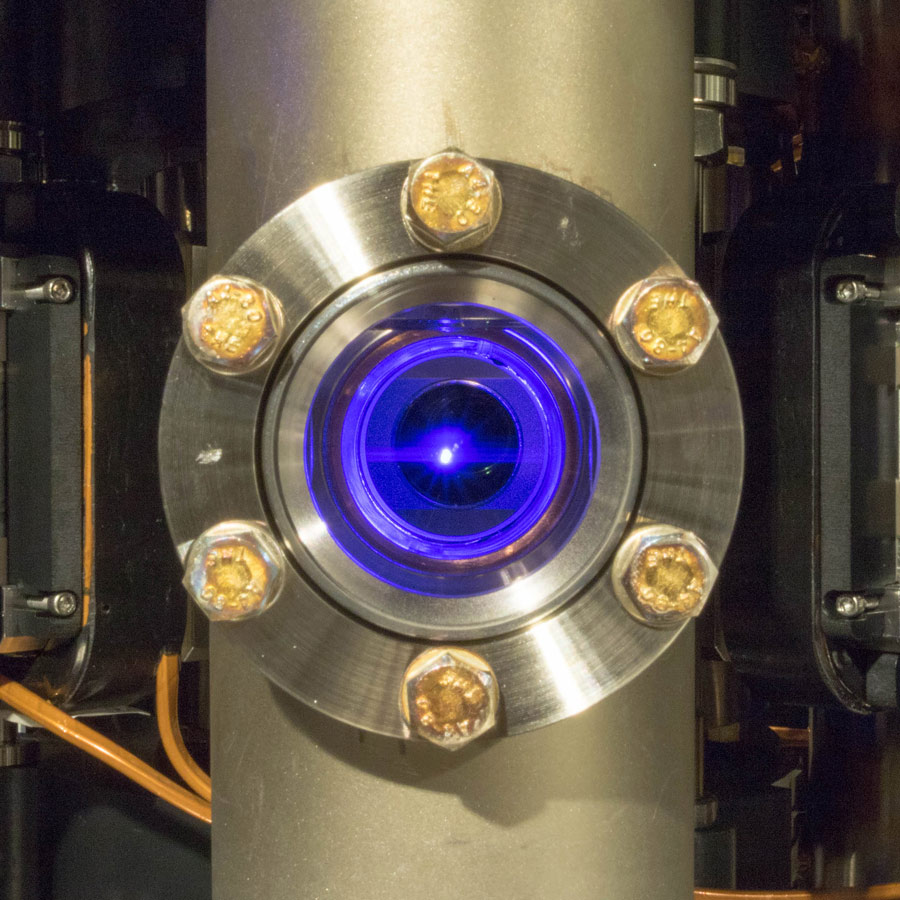 Richard Feynman suggested a way out of this dilemma almost forty years ago: If one had a well-controlled quantum many-body system, one could use it to simulate other quantum many-body systems that may be impossible to study otherwise. In essence, Feynman argued that playing a game of quantum chess may be easier than simulating one on a classical computer. Feynman’s hard technical challenge for today’s experimental physicist is then to create, isolate, and manipulate a quantum many-body system under clean and precisely controlled conditions. In their laboratory, Dr Blatt and his colleagues are realising such a system, using a combination of advanced technologies.

Lattices of light
Dr Blatt’s chessboard is a pattern of light, created by laser beams, and the chess pieces moving across the board are ultracold neutral strontium atoms. If a mirror reflects a laser beam back into itself, the light will form a stable interference pattern of higher and lower intensity, called an optical lattice. The high-intensity regions of such an optical lattice form a regularly spaced array, and in these regions, neutral atoms can be placed, just like the pieces on a chessboard.

Atoms trapped in an optical lattice can tunnel between neighbouring sites and interact with other atoms on the same site. This arrangement naturally simulates how electrons behave in a real crystal. The regularly spaced optical lattice mimics the orderly pattern of ions in a crystal and the atoms mimic the electrons hopping from ion to ion. However, because the atoms can be precisely controlled, and because the optical lattice is free of defects, one can use atoms in optical lattices to do quantum simulations of foundational models of solid-state physics.

The world’s best atomic clock
Dr Blatt’s team load their optical lattices with strontium atoms to exploit their unique features, which relate to the ‘states’ of their outermost electron. This electron can be in its ‘ground’ state, which has the lowest possible energy, or in its first ‘excited’ state, which has a higher energy than the ground state. The ground and excited state are connected by a transition, whose frequency corresponds to the energy difference between the states.

For strontium atoms, this transition is exceptionally narrow, enabling physicists to determine its value to extremely high precision. Furthermore, researchers can use this transition to deliberately promote a strontium atom from its ground state to its excited state using a ‘clock’ laser with a precisely defined frequency. This makes strontium atoms the basis of the best atomic clocks currently available; they are so accurate and precise that if they would have started running at the beginning of the universe, they would still show the correct time within one second. In their work, Dr Blatt’s team make use of this technology, which lets them control and modify the quantum state of each strontium atom in their optical lattice. 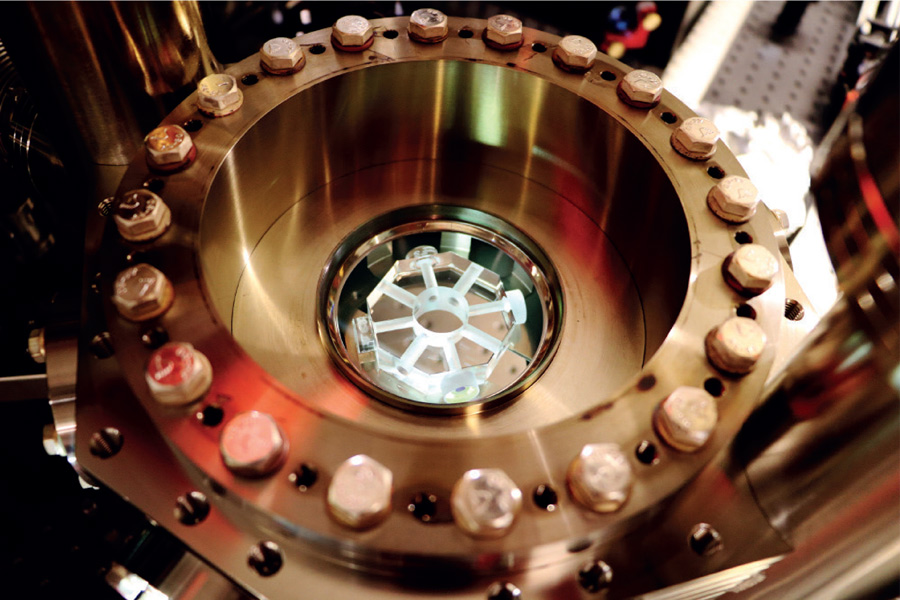 Recently, the team has demonstrated special kinds of optical lattices where the ground state of the strontium atom can move freely, while the excited state is tightly trapped at a site of the lattice. In this way, they can realise different rules of motion depending on the atom’s state. In the chess analogy, the ground state atom can move freely like a queen, while the excited state atom is even more constrained than a king.

Quantum gas microscope
With the development of large chessboards and different rules of motion for different chess pieces, Dr Blatt’s team is in the perfect position to start playing with new kinds of quantum simulations, based on controlling individual atoms. Targeting individual atoms in the optical lattice with the clock laser is made possible by a state-of-the-art quantum gas microscope working at the limit of optical resolution, a technology pioneered by Prof Bloch’s group at the Max-Planck-Institute over the last decade. With this technology, it is possible to apply a clock laser beam to an excited-state atom, which can then be converted to a freely moving ground-state atom. This atom can be viewed as a freely travelling photon, and a tightly trapped excited state atom can be viewed as a photon stored in a quantum emitter.

Simulating strongly interacting emitters
Their large optical lattices will allow Dr Blatt’s team to cleanly simulate strong photonic interactions between many such quantum emitters. This scenario represents a foundational problem in quantum optics, but it is very hard to study in real systems. The advantage of a quantum simulation is that everything can be changed at will: the spacing between the emitters, the strength of their interaction, and the rules of motion of the travelling photons. By using different isotopes of the strontium atom for the quantum simulation, even the fundamental character of the travelling photons can be changed. They can be made to not notice each other at all, just like real photons. However, they can also be allowed to collide, and their quantum statistical character can be modified as well. Such an experiment will realise new physical systems beyond what can be studied in the realm of quantum optics.

Dr Blatt’s new quantum game will be played with new pieces on a much larger board. He is confident that his team’s work will create many opportunities to study problems in materials science and quantum chemistry, while helping to create the next generation of strontium atomic clocks. 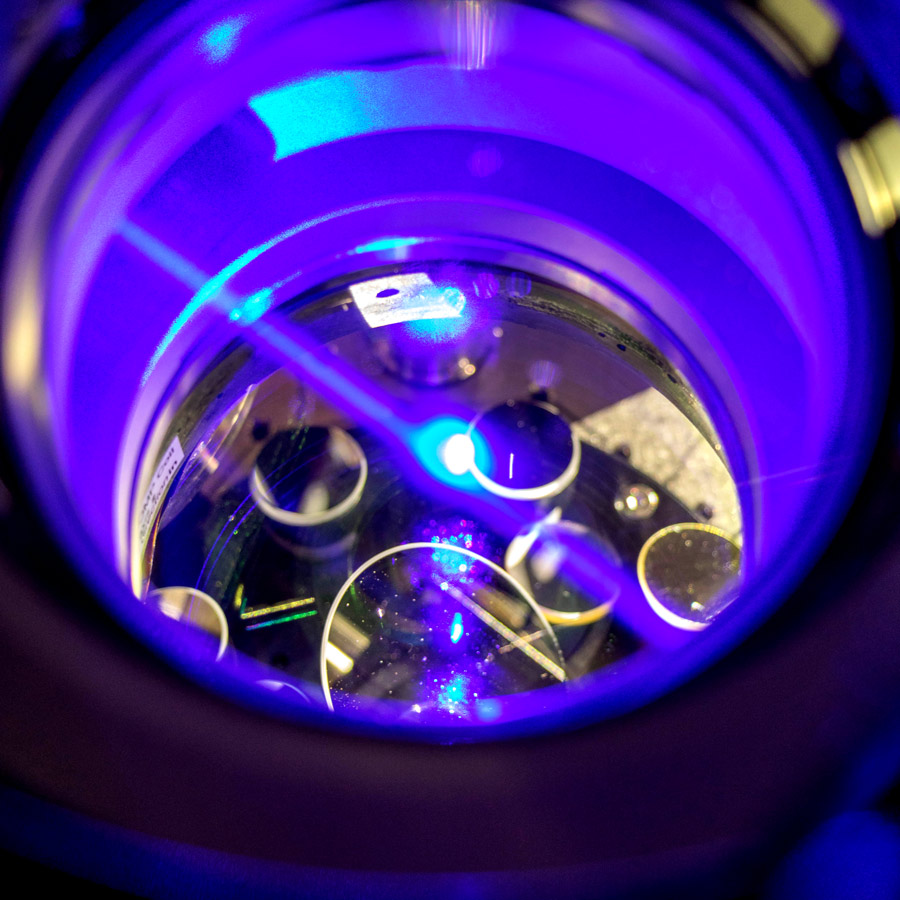 What are some of the most exciting potential discoveries which could be made possible through quantum simulations?

<> I would compare today’s quantum simulators with the analog computers that precede the digital computers we all carry around in our pockets today. These analog computers were custom designed to efficiently solve important practical problems, for example in navigation and aerospace design. Quantum simulators are different, though, because they directly work with particles governed by the equations of quantum mechanics. No classical computer, analog or digital, can simulate the resulting dynamics for more than a few quanta. For this reason, these devices are not faster or better versions of our current computing machines. Instead, they let us explore the realm of many-body quantum mechanics directly, and represent a true paradigm change in computing.

The Lattice, the Clock, and the Microscope: A Next-Generation Quantum Simulator was last modified: November 5th, 2020 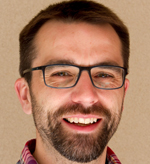 Sebastian Blatt obtained his PhD in Jun Ye’s group at JILA on strontium lattice clocks (2006-2011). As a postdoc in Markus Greiner’s group at Harvard, he pioneered microscopy of fermionic atoms (2011-2015). Dr Blatt currently is a group leader in Immanuel Bloch’s division at the Max-Planck-Institute of Quantum Optics.

For perspective on novel quantum simulations: Theory group of Ignacio Cirac at MPQ, in particular Alejandro González-Tudela (now at U. Madrid). For atomic structure theory and application to strontium clocks: Marianna Safronova and Sergey Porsev at U. Delaware.

Blatt, S. (2020). The Lattice, the Clock, and the Microscope: A Next-Generation Quantum Simulator. Research OUTREACH. Available at: https://researchoutreach.org/articles/lattice-clock-microscope-next-generation-quantum-simulator/ (Accessed YYYY/MM/DD)