Health & Medicine
Glioblastoma Multiforme (GBM) is a serious form of brain cancer with highly limited treatment options. Through extensive clinical trials, dendritic cell vaccines have been shown to prolong life in patients. However, a successful randomised controlled clinical trial (RCT) has not been carried out. Professor Stefaan Van Gool, Medical Director of the Immuno-Oncological Center (IOZK) in Cologne, aims to understand why. His extensive literature review reveals the reasons why carrying out a successful RCT for GBM patients is so challenging. Building on this work, the IOZK team are developing promising new combination anti-cancer immunotherapy strategies that can be integrated with first-line treatment to improve patient prognosis.

Cancer is the second leading cause of human death worldwide, accounting for one in every six deaths. Cancer is the subject of intense clinical research into treatments and potential cures. There are many forms of serious cancer, but one of the most difficult to treat is Glioblastoma Multiforme (GBM). There is a need for improved treatments for GBM patients, like the inclusion of first-line immunotherapy to fight their cancers. Meta-analyses (that is, the examination of data from many independent studies, to help determine overall trends) have investigated the effectiveness of specific immunotherapy treatment for GBM. These studies show that immunotherapy can cause a significant increase in survival time. However, no single research group has successfully demonstrated the efficacy of this type of treatment in a randomised controlled trial (RCT).

Professor Stefaan Van Gool, Medical Director at the Immuno-Oncological Center (IOZK) in Cologne, has led extensive analysis of the literature to try to better understand why this is the case. His team’s findings provide evidence highlighting multiple issues that arise when assessing GBM immunotherapy treatments via RCTs. Building on their studies, the IOZK team is developing active and specific immunotherapies that, in combination with other anti-cancer therapies, provide exciting therapeutic potential. 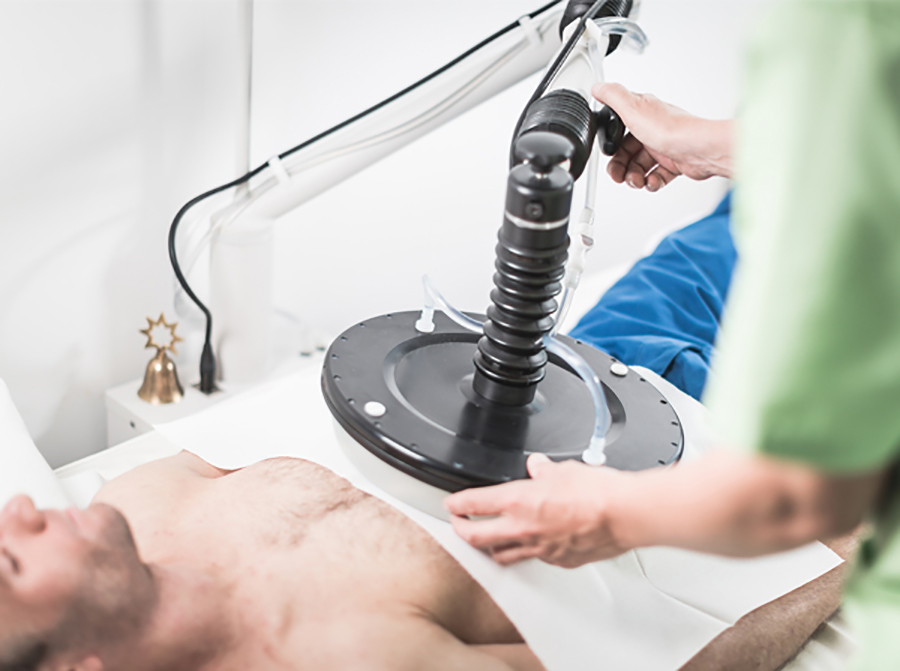 What makes GBM so serious?
Brain tumours are the leading causes of cancer deaths in males aged 20–39 and the fourth most common cause in females of the same age. However, GBM is a particularly dangerous form of cancer, and the most frequent malignant brain cancer in adults. It is a rapidly growing tumour of the brain and spinal cord, which causes symptoms to progress swiftly. The years of loss of life due to GBM is the highest of all cancers, in part due to its occurrence at a young age and its poor prognosis. Despite this, GBM is referred to as an orphan disease as it is rare and has not had major interest from drug companies in developing a treatment. The current standard-of-care following diagnosis of GBM includes neurosurgery, radiochemotherapy, and maintenance chemotherapy. Unfortunately, however, these treatments do not fully control the disease, which contributes to its poor prognosis.

IOZK are developing active and specific immunotherapies that, in combination with other anti-cancer therapies, provide exciting therapeutic potential.

Treating GBM with immunotherapy
Unfortunately, the available options for treating people with GBM have not changed in recent years. However, research has been carried out into innovative new areas of treatment including tumour-treating fields, anti-angiogenic treatments, targeted therapies, oncolytic virus therapy, and immunotherapies. 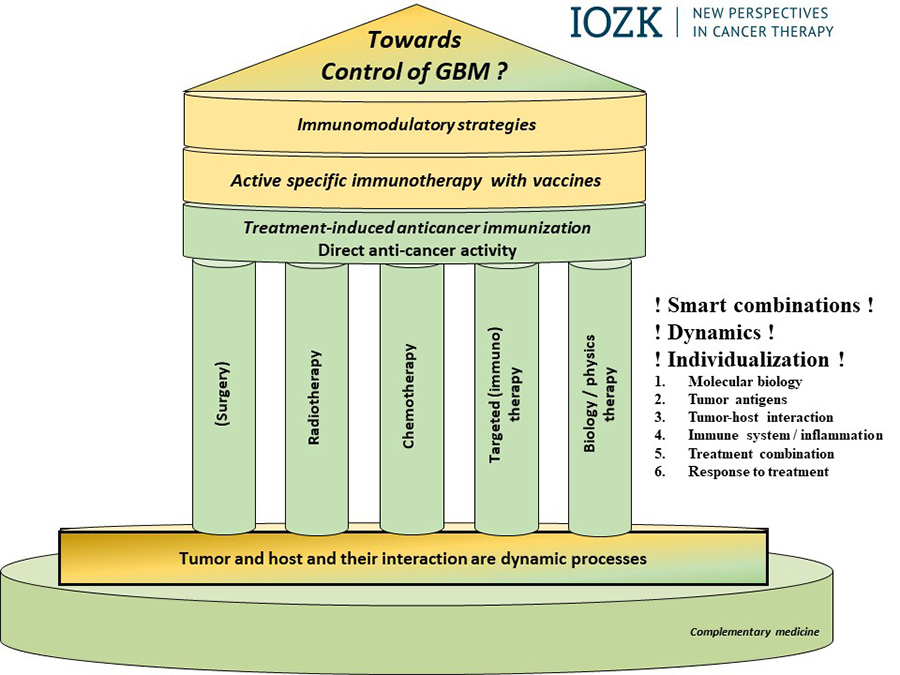 Systematic reviews of phase I and II trials have shown a significant improvement of the long-term overall survival (two to five years) when DC vaccines were administered to people with GBM. The effectiveness of DC vaccines for GBM reached a level 2a and level 1c of evidence (Oxford Centre for Evidence-Based Medicine). So why has the neuro-oncology community not succeeded in conducting an RCT? Professor Van Gool’s extensive investigation of the literature highlights several reasons why this might be the case.

How do randomised controlled trials work?
Well-designed RCTs that are conducted properly can provide a useful comparison of different treatments. RCTs aim to allow for the factors that are not directly under experimental control. In a clinical context, RCTs are used to compare the effects of different drugs, medical devices, surgical techniques, diagnostics procedures, or other medical treatments. Individuals enlisted in RCTs are different from one another in both known and unknown ways. These differences can’t be directly controlled, but they can influence study outcomes. By randomly allocating people between the treatments being compared, an RCT offers researchers statistical control over these influences.

RCTs are considered to be the most reliable form of scientific verification in the hierarchy of evidence that influences healthcare policy and practice, because they reduce spurious causality and bias. In some areas, great progress has been made through RCTs. These trials tend to work by comparing a new experimental treatment against the best current treatment as a control. However, RCTs can be expensive. They often take many years to complete and it can be difficult to reach the very large sample sizes needed to yield significant results. Due to the costs of running RCTs, they can’t always test every variable and give the full picture of complicated medical situations.

A combination of first-line treatments in addition to immunotherapy strategies resulted in a positive synergistic effect.

Why have RCTs been ineffective for studying GBM immunotherapies?
Professor Van Gool carried out a review of the literature around how good RCTs are at assessing the efficacy of immunotherapy. He concluded that there are many reasons why carrying them out can be problematic.

Firstly, the design of an RCT can be a major challenge. It can be hard to find an appropriately matched control group when you have to include variables such as the clinical status of the patient, the tumour biology, and chemosensitivity (MGMT promoter methylation status) of tumour cells, the tumour–host interaction, and the systemic immunity.

Second, people’s reactions vary in response to radiochemotherapy. This can influence the immune system and the potential transient clinical need of steroids during treatment, and in turn affect to a large extent how long a patient is able to stick to a study protocol.

Thirdly, the highly dynamic character of the tumour and the micro- and macro-environment is not very compatible with a fixed-treatment protocol within an RCT.

Fourth, there are ethical issues related to the control group for an RCT for GBM, as prolonging overall survival is in question. And finally, reality shows that the combination of laboratory testing regulations (such as GLP, GTP, GMP, and GCP) may play a part, and pose a significant hurdle for academic centres as well as the pharmaceutical industry.

The future of GBM treatment
Notably, Professor Van Gool’s retrospective analysis of 70 GBM patients revealed that a combination of first-line treatments in addition to immunotherapy strategies resulted in a positive synergistic effect. These combination strategies demonstrated a highly significant improvement in overall survival. Professor Van Gool explains this innovative concept: ‘Neurosurgery, radiotherapy, chemotherapy, targeted (immune) therapies, and immunogenic cell death therapies are all anti-cancer strategies that might partly induce anticancer immunity and prolong patient survival. In most cases, however, this is not enough, and active specific immunotherapy is needed for the installation of anti-cancer immunity. Finally, modulatory immunotherapy (like checkpoint inhibitors) might be needed to facilitate the actively induced anti-cancer immune response.’ The philosophy is that immunotherapy strengthens and activates the patient’s own defence system, to help fight their cancer. This protective immunotherapy cancer treatment holds much promise in the treatment of patients with GBM.

How close are we to bringing multimodal immunotherapy into routine practice for GBM patients?

Clinically and technically, I would say ‘very close’. The treatment is ambulant and does not add any major toxicity. Patients can be referred to a few specialised centres in each country where this part of the treatment can be administered, in close communication with the local oncology centre. The HGG-IMMUNO-Group brought neuro-oncologists from many countries together to build up a network within Europe for delivering DC vaccination. However, at the regulatory and health insurance level, I have to say ‘very far’. All must work together to pass these hurdles, with the goal of prolonging life, and good quality of life, for patients with GBM.

A new concept for the treatment of brain cancer was last modified: November 23rd, 2021 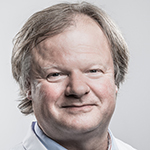 Stefaan Van Gool, MD, PhD, is a paediatric neuro-oncologist. After his studies in Leuven and Münster, he became Professor and successfully established dendritic cell vaccination for brain cancer in Europe. In 2015 he became Medical Director at the Immuno-Oncological Center Köln where he delivers individualised multimodal immunotherapy for cancer patients.

Towards a quantitative personalised oncology
Health & Medicine
Read This Article
Do we feel free when we make hard decisions? A psychological perspective on feelings of freedom in decision-making
Behavioural Sciences
Read This Article