Arts & Humanities
Professor Graham Welch and the music education research team at University College London have conducted extensive work to evaluate and document the benefits of music for children. Their research has included large-scale studies of music programmes sponsored by governments and charities. The outcomes of these studies have shown clear benefits of music in supporting optimal health, well-being and development in children. The science data indicate that music holds great potential to support human development and enhance social and emotional well-being.

Music is one of life’s joys for many people across the globe. Embedded in our everyday lives, the sounds of music find diverse expression in myriads of ways in our daily activities. Music is also an accompaniment on more momentous occasions in our lives, such as moments of celebration, grief, and solidarity. It provides solace, distraction and inspiration. It uplifts people when weary and it brings encouragement and focus when attention needs to escape tiredness. Music is a universal language that transcends geography and culture. It extends its embrace from the cradle to the grave.

Enjoyed by many intuitively, the power of music to transform and heal people has been the subject of movies, books and a growing array of scientific research over recent decades. Within this scientific collection of evidence, music has been shown to have benefits for human cognition, emotion, health and social inclusion across the lifespan. A strong research team at the University College London (UCL) Institute of Education has led multiple research projects focusing on the benefits of music in human development, especially for children and young people. The UCL academic research community includes the largest number of graduate students in applied music education in Europe, including around 50 doctoral students pursuing their own research projects in any one year.

Professor Graham Welch, who holds the UCL Institute of Education Established Chair of Music Education, reports evidence that engagement in music, whether by listening, singing, playing, or creating, has been shown to positively enhance various dimensions of human life. Discussing this in a recent editorial review of international research contributions regarding the impact of music, Professor Welch says that, whilst enabling the expression of people’s feelings and emotional experiences, musical activity has also been shown to contribute to improved educational outcomes and language development for children and young people, and to enhance emotional well-being in adolescents.

Results from these studies have shown benefits of music for children in supporting aspects of their cognitive development and by implication, educational attainment.

At a physical level, learning music can support children’s dexterity and auditory-motor coordination. For older people too, with conditions such as mild to moderate dementia, musical activity has been shown to be helpful with cognition, communication and social engagement. Music has also been shown to bring relief to people recovering from physical illness and medical procedures, such as laryngectomy. Musical activity has a role as a mode of therapy, such as with music therapy utilised in the treatment of traumatic stress and brain trauma. Music thus offers tremendous potential to enhance the well-being of people, whether used informally at home, or more formally in musical activities in treatment programmes, or as part of a formal school education programme. As a result, governments and charities alike have supported the development of music programmes for the benefit of children, including those differently abled. 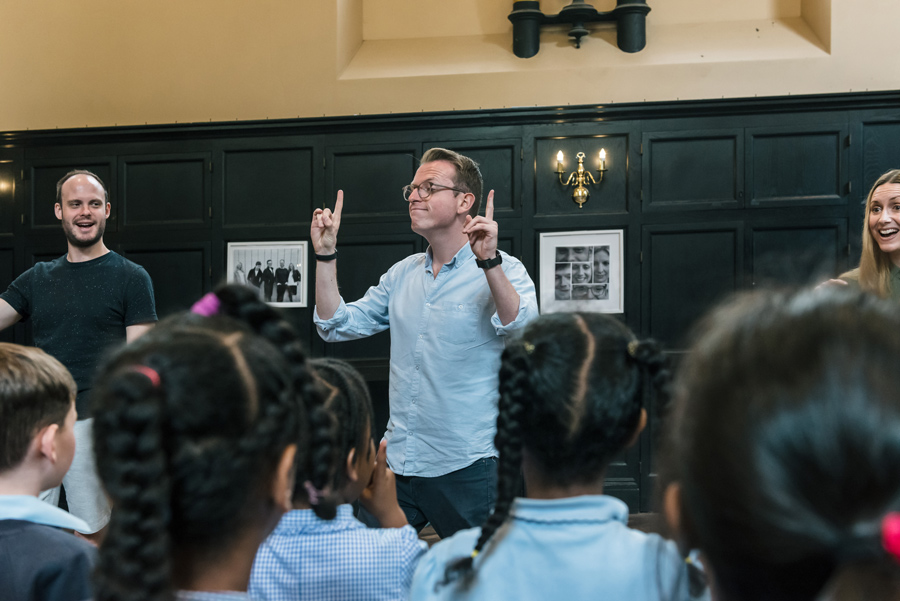 Children’s Development and Well-Being
The UCL research team has been specifically involved in a number of large -scale research projects, designed and developed to evaluate the benefits of music programmes, sponsored by charities and governments – to investigate impacts in music and through music. In England, the government sponsored a National Singing Programme for children, named ‘Sing Up’ (now an independent charity) and Professor Welch’s research team has been involved in evaluating 12,000 children participating in this programme. An additional 10,000 children learning a musical instrument in the East London ‘Every Child a Musician’ have also been evaluated by the team to determine the impact of music. Results from these and other studies have shown the benefits for children of music in supporting aspects of their cognitive and social development and by implication, educational attainment.

Sing Every Day
In a smaller, specially designed project focusing on a singing programme for a group of young disadvantaged inner-city children in London, the UCL researchers evaluated the impact of participation in a school-based singing project ‘Sing Every Day’ organised by the VOCES8 Foundation. Within this study, a team of professional singers visited two classes in two primary schools to mentor generalist (non-music specialist) class teachers.
The mentoring included singing and other vocal activities over two school terms. A group of two identically aged classes (5.2 and 6.3 years of age) in a neighbouring school was used as controls. Teachers were asked to provide 5-10 minutes of singing activity in their classrooms every day. To determine the impact of the singing programme, each child was assessed individually at the beginning of the programme and six months later at the end. The evaluation included singing behaviour and other measures of the children’s cognitive development, including reading and executive function. Executive function is a multi-dimensional cognitive construct which encompasses working memory, cognitive flexibility, and effortful control over mental and thinking processes.

The singing evaluation used two well-known songs, ’Twinkle Twinkle’ and ‘Happy Birthday’ and a well established rating scale of singing competency, (Welch, 1998), used previously by the UCL team in the evaluation of the National Singing Programme in England. The cognitive evaluation included the Peg Tapping task of response inhibition and tests of Working Memory (Nonsense Word Repetition and Digit Span). The results showed that in the post-assessment there were significant improvements in children’s performance on singing ability (Figure 1), reading scores and working memory which were also correlated (Figure 2). Qualitative data also suggested benefits to the generalist teachers in their confidence in providing singing activities to their classes. A follow-up evaluation five months later, showed that teachers continued to sing every day with their pupils.

The higher the child’s singing rating, the more positively the child rated their own self-concept and sense of social inclusion.

Music Engagement and Social Inclusion
Professor Welch says that there is scientific evidence suggesting that engaging in musical activity can also impact positively on people’s sense of social inclusion and social integration. Although the ‘Sing Every Day’ programme did not result in changes to the children’s scores on social inclusion or perceived quality of school life, this may have been due the fact that their baseline measures on these indicators were already positive and high at the beginning of the programme. In a prior major study, the UCL research team evaluated a national, government-funded singing programme (“Sing Up”) for primary school children in England.

Data were collected for 6,087 children over a four-year programme, assessing each child’s singing ability and their responses to a questionnaire focused on assessing their sense of social inclusion, with responses rated on a seven-point Likert scale. The analysis of the group’s results indicated that the higher the child’s singing rating, the more positively the child rated their own self-concept and sense of social inclusion – a finding confirmed in to be published data analyses of the youngest Sing Up participants. Importantly, these results held across demographic categories such as the singer’s age, sex and ethnicity and locality. These results have relevance for contributing towards supporting the achievement of global development goals, such as the United Nations Sustainable development policy targets, which specify social inclusion as a key objective for the well-being of individuals and societies.
Music holds the potential for people to engage and collaborate together through a unifying activity that transcends demographics which might otherwise precipitate social inclusion or exclusion. Professor Welch says that a review of the scientific literature suggests a neurobiological role for music in supporting social behaviours, attachments and bonding through group participation in musical activity. Within this, music offers the potential for positive social change. Furthermore, people across the lifespan can engage and participate on a continuum of activity and that “musical activities, whether focused on listening, being creative or re-creative, individual or collective, are infused with the potential to be therapeutic, developmental, enriching, and educational, with the caveat provided that such musical experiences are perceived to be engaging, meaningful and successful by those who participate”.

Importantly, engagement in musical activity is universally accessible to people of all social and demographic groups and therein lies its potential to provide the demonstrated benefits for individuals, societies and human development.

Given the well documented evidence of the benefits of music for health and well-being, how can people be encouraged or motivated to make musical activity a part of their daily activities?

Making sense of sound is a core feature of our human design. Sound, whether experienced as music or language (or both) allows us to communicate with others, to be social beings, and to express and understand emotion. Because musical behaviours are multi-sited neurologically, and networked into the brain’s emotional centres, making music regularly, alone or with others, can be cathartic, release tension, reduce stress and enable us to cope better with daily challenges.

Music can be creative as well as re-recreative, a form of personal exploration and expression, and not just the reproduction of existing music. Singing along to the radio, listening to favourite tracks on an album whilst taking exercise, or in the car, being part of an amateur musical group (virtual or live), large or small, beginner or more advanced, can be an amazing, joyful and enriching experience.

Musical activity (clapping for the carers and the isiZulu song Jerusalema which went viral) has brought people together during the pandemic. What in your view have the main social benefits been of this spontaneous musical activity?

Making sound with others fosters a sense of community, of belonging. It is a social behaviour. The power of clapping with others involves the entrainment of individual gestures into a collective sound that integrates the power of rhythm with physical movement. The isiZulu song Jerusalema and associated video embodied all these core properties, going viral with its mix of repetitive dance moves, strong rhythms, simple harmonic structure, stunning vocals and infectious visual images. Shared music making (‘musicking’) affirms and celebrates our personal and social lives, and brings a sense of active control in an uncertain and threatening world.

Professor Graham Welch, PhD holds the UCL Institute of Education (formerly University of London) Established Chair of Music Education since 2001. He is a Past President of the International Society for Music Education (ISME) (2008-2014) and elected Chair of the Society for Education, Music and Psychology Research (SEMPRE). He holds Visiting Professorships at universities in the UK and overseas, and is a former member of the UK Arts and Humanities Research Council (AHRC) Review College for Music (2007-2015).

2 thoughts on “Optimising well-being and development through music”