Health & Medicine
The Singapore-based Cancer ImmunoTherapy Imaging (CITI) programme is a Singapore-wide collaborative research group, comprising 12 research institutes. CITI’s efforts are focused on the discovery and application of peptide-based imaging probes, which target immunotherapy treatment response biomarkers. Dr Edward G Robins, Head of Radiochemistry at the Singapore Bioimaging Consortium and Deputy Director of the NUS Clinical Imaging Research Centre, alongside his colleagues at CITI, investigate the use of a fluorine-based probe in assessing Immune Checkpoint Inhibitor efficacy in murine models of colon cancer.

Today, cancer remains the second leading cause of death worldwide. The global burden of cancer grows year-on-year, with the need for quality cancer treatment becoming ever more paramount. Immunotherapy is a newer form of cancer treatment and has been transforming the cancer care scene over the past decades, particularly with the development of the first-ever cancer vaccine, against human papillomavirus. Immune Checkpoint Inhibitors (ICIs) are a powerful branch of immunotherapy, which operate on and block human cell immune checkpoints (ICs).

Lessons in immunology
One of the immune system’s major players is the T cell, a type of lymphocyte originating from the bone marrow. T cells exhibit multiple receptors on their surfaces, which bind to and kill cells. To prevent T cells from killing the host’s own cells, the immune system utilises ICs. At ICs, the immune system docks antibodies onto the T cell’s receptors, blocking them from recognising and killing cells. ICs effectively ‘turn off’ T cells until they are required during pathogen invasion. Cancer cells hijack this system by producing antibody-copycat molecules that perform the same function as ICs, binding to T cell receptors and deactivating T cells’ response, thereby escaping unnoticed, allowing the cancer to grow and proliferate unimpeded. ICIs are drugs that block checkpoints, keeping the T cells ‘on’ so they can detect and attack cancer cells. The two most-studied ICs are CTLA4 and PD-1, which modulate the activity of Tumour Infiltrating Leukocytes (TILs), though other checkpoints, including OX40, TIM3 and LAG3, are gaining notoriety in the immune-oncology community.

As the activities of PD-1 and CTLA4 are non-redundant, it was initially thought that use of their respective ICIs together, in combination therapy, could result in a synergistic interaction, culminating in greater tumour regression than monotherapy with just one ICI alone. However, research has shown that the efficacy of combination PD-1 and CTLA4 therapy is low, and side effects can be severe and wide ranging. The biology surrounding the mechanistic aspects of combination and mono-ICI therapy is unclear, and, in order to improve ICI efficacy, a deeper understanding of ICI uptake and mechanism of action are urgently needed. Towards this, Dr Edward Robins and his colleagues at CITI are developing molecular biomarkers to enable precision immune cell imaging of this enigmatic interaction.

Our friend fluorine
The CITI team developed a fluorine-labelled probe, [18F]AlF-mNOTA-GZP, which binds to granzyme B, a serine protease released by distinct classes of TILs, specifically CD4+ and CD8+ cells, on their activation. If TIL cells are active, or turned ‘on’, the IC has been successfully inhibited by ICI therapy. Granzyme B is therefore a good indicator that ICI therapy is working.

Phenotypic failures
The efficacy of the probe was assessed in two different murine colon cancer phenotypes, CT26 (MSI-low) and MC38 (MSI-high). Defective DNA mismatch repair (MMR) is one cause of colorectal cancer. DNA MMR is a cellular process that corrects spontaneous errors arising during DNA replication – cells with defunct DNA MMR accumulate errors, creating repeated DNA fragments called ‘microsatellites’. Individuals who possess microsatellites are said to have ‘microsatellite instability’ (MSI), and exhibit, in general, a better response to ICI therapy in clinical settings. It was therefore important during this study to include both an MSI-high (MSI-h) and MSI-low (MSI-l) phenotype, to replicate clinical conditions, and to assess whether differences in phenotype affected probe uptake.

Mice were inoculated with CT26 and MC38 colon tumour cell lines, and subsequently underwent ICI treatment via intraperitoneal injection (injection into the peritoneum, or body cavity). Mice of both phenotypes were grouped into control, mono- and combination therapy sets, and injected with either antibody IgA (control), PD-1, CTLA4, OX40, TIM3 or LAG3 ICIs alone (monotherapy), or PD-1+CTLA4, PD-1+OX40, PD-1+TIM3 or PD-1+LAG3 (combination therapy), at 6, 9 and 12 days after tumour inoculation. 14 days after tumour inoculation, tumour lengths were measured and mice were injected with the fluorine-labelled probe [18F]AlF-mNOTA-GZP. Mice were then imaged via Positron Emission Tomography (PET) – a technique that uses radiotracers (such as the fluorine probe) to visualise changes in chemical absorption in groups of cells. PET does this by detecting gamma rays emitted by the decaying isotope to form 3D images. In this study, PET was used to measure the uptake of the probe to the mice’s tumour cells. Post-PET analysis, tumours were excised, stained against relevant TIL groups, including CD4+ and CD8+ cells, and analysed via flow cytometry.

PET imaging data showed that levels of probe uptake differed between treatment groups. Low uptake was shown in the control antibody group, and higher uptake was observed for both phenotypes in cell sets where ICI treatment successfully inhibited tumour growth (measured by change in tumour volume). Flow cytometry data on the distribution of TIL classes in the tumour microenvironment was used as a measure of ICI treatment efficacy. For CT26 tumours, increases in all TIL classes were observed in response to PD-1, CLTA4 and OX40 monotherapy, and PD1+CTLA4 and PD1+OX40 combined therapy, compared to the control, but no significant changes were observed for either mono- or combination therapy for Tim3 and LAG3. For MC38 tumours, increases in CD3+ TILs were only observed for OX40 monotherapy and PD1+OX40 combination therapy. For CD8+ TILs in MC38 tumours, increases were observed for all monotherapies and all combination therapies. For both phenotypes, a positive correlation between TIL infiltration and probe uptake was observed, suggesting that [18F]AlF-mNOTA-GZP is a good measure of TIL tumouricidal activity, and therefore a good measure of ICI therapy efficacy.

Probing cancer: the way forward
Overall, the study showed that the CITI group’s fluorine-18 labelled probe was able to accurately stratify tumour responses to different mono- and combination ICI therapy programmes. Other studies have shown similar results for probes against cell-surface molecules of various TIL classes; however, high TIL levels in the tumour microenvironment do not necessarily indicate that the TILs are active, or that the tumour is responding to therapy, just simply that the TILs are present. In this study, the use of a probe that binds explicitly to granzyme B, a molecule only released upon T cell activation, has been proven to be a highly precise way of imaging colon cancer response to ICI therapy.

In this study, the use of a probe that binds explicitly to granzyme B has been proven to be a highly precise way of imaging colon cancer response to ICI therapy.

While probe uptake correlates with TIL response, TIL response differed widely between the two tumour phenotypes, CT26 and MC38. Dr Robins and his colleagues have suggested that this difference can be attributed to the MSI-h phenotype of the MC38 tumour groups. The presence of microsatellites is thought to create an extremely volatile and immune-stimulatory environment, due to the increased number of mutated antigens (neoantigens) expressed by MSI-h tumour cells (in comparison to MSI-l cells) that result specifically from amassed errors in DNA MMR. A high level of neoantigens is thought to draw in much greater numbers of TILs. The greater the number of ‘activated’ TILs, the more T cells there are to attack and destroy tumour cells, and the greater the success of the ICI therapy. This hypothesis is backed by the data: overall, the CT26 tumours show a modest response to PD-1 monotherapy (40%), and a slightly improved response to CTLA4 monotherapy and combined PD-1+CTLA4 therapy (70%). MD38 tumours, however, being primed to respond to ICIs due to their MSI-h phenotype, displayed a higher response rate (70-90%) to all therapies, and increased probe uptake to match, in comparison to CT26 cells.

This study shows that the [18F]AlF-mNOTA-GZP probe is able to accurately measure and quantify tumour response to a range of ICI therapy programmes, provided as either mono- or combination treatments, in murine models of colon cancer. Still, probe uptake has proven to be greatly influenced by the tumour microenvironment, and further studies are needed to assess the use of granzyme B as an indicator of ICI efficacy in a variety of phenotypes and a variety of cancers besides colon. Overall, the CITI programme’s research, discussed here, is a strong step towards precision immune imaging for precision immune-oncology.

The research above is part of the CITI programme’s overarching aim to develop innovative platforms and technologies that can be used in pre-clinical, clinical and commercial settings to assess ICI therapy. In particular, they aim to use a systems biology approach to develop cutting edge immunotherapy biomarkers, like the fluorine-18 labelled probe discussed here. Their efforts will be based around the discovery and clinical implementation of peptide-based imaging probes that target immune cell-surface markers, building a peptide-based ‘Immuno-oncology imaging toolbox’.

Dr Robins and his colleagues at CITI are funded through a competitive grant award administered by the Agency for Science Technology and Research (A*STAR), a Singapore government agency driving mission-oriented scientific research aiming to bridge the gap between academia and industry. The CITI programme’s objectives are to ensure that academic and commercial ICI therapy research translates rapidly into real-time clinical diagnostic solutions.

Do you plan on exploring the use of the fluorine-18 PET probe in other, non-colon, cancer models?

<> Yes, absolutely. We are already testing the [18F]AlF-mNOTA-GZP peptide probe in cancer types of both local (South East Asia) and of global significance, including lung, liver and cancers of the head and neck.

What are the advantages of using fluorine-18 PET probes in clinical settings?

Fluorine-18 is the most common PET radioisotope used clinically worldwide. Its physical characteristics make fluorine-18 almost ideal for imaging. With a half-life of 109.7 minutes, fluorine-18 PET radiopharmaceuticals can be manufactured both commercially and for research and widely distributed to hospitals and clinical imaging facilities to support patient care. 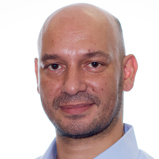 Dr Edward Robins is Head of Radiochemistry at the Singapore Bioimaging Consortium (SBIC) and Deputy Director of the NUS Clinical Imaging Research Centre. His laboratories at SBIC are part of the Isotopic Imaging & Probe Development Cluster, responsible for developing imaging biomarkers for Positron Emission Tomography and Magnetic Resonance Imaging.