Health & Medicine
Viral encephalitis is a debilitating consequence of viral infections: invasion of the brain by viruses causes an inflammation that, even months or years after recovery from the viral infection, can impair cognitive functions such as learning and memory. Prof Robyn S. Klein from Washington University School of Medicine has developed novel animal models and approaches to study virus-mediated memory disorders, with the goal of identifying biomarkers and therapeutic targets for prognosis and treatment. Her research sheds light on mechanisms triggered by various viruses, potentially including the severe acute respiratory syndrome coronavirus 2 (SARS-CoV-2), which causes COVID-19.

Long-lasting cognitive deficits that persist even after the virus has been cleared are among the most debilitating consequences of some viral infections. Viral encephalitis, caused by viruses that enter the brain, can be associated with chronic neurological dysfunction that can persist long after recovery from the infectious event. For instance, over 50% of patients who survive neuro-invasive infection with the West Nile virus (WNV) experience long-term cognitive sequelae, including defects in verbal and visuospatial learning that can last for months or years beyond the acute infectious event.

Post-infectious neurological dysfunction has traditionally been attributed to irreversible damage caused by the pathogens themselves. However, in the past few years, growing evidence suggests that the immune response could play a role. Triggered by the viral infection, the primary role of the immune system is to eradicate the virus, but – as some sort of side effect – immune cells and molecules may interfere with neural cell function and communication, and be responsible for long-lasting alterations that prevent learning, disrupt memories, and progressively cause dementia.

Prof Robyn S. Klein and her team address virus-mediated learning and memory disorders using tools and technologies that combine basic neuroscience and immunology (neuroimmunology), neurovirology, and neuroimaging approaches. The focus of their work has been on emerging viral infections, which include West Nile (WNV) and Zika (ZIKV) viruses. WNV and ZIKV both target neurons and are associated with post-infectious cognitive dysfunction.

During the acute stage
When viruses invade the brain, they trigger the immune system, whose primarily aim is to defend the organism against all kinds of pathogens. Innate immunity is the first line of defence. Unlike adaptive immunity (the other component of the immune system), it is not specific: the innate immune defence mechanisms involved in response to infection are similar regardless of the nature of the pathogen.

Inflammation is one of the main responses of innate immunity. All types of brain cells (neurons, astrocytes, oligodendrocytes and microglia) express immune molecules that induce the recruitment of virus-specific cells into infected regions of the brain. The aim is to promote pathogen clearance. Mediated by cytokines (small proteins that convey signals from one cell to another), inflammation is localised and allows the site of infection within the brain to be identified and cleared of the virus.

Clinical signs arise during inflammation and are indicators of acute infection. Indeed, the immune response triggers adaptive changes in behaviour, including fatigue, hypersomnia, decreased activity and social interactions, and an inability to concentrate. The purpose of these changes is to conserve energy and promote survival. Sometimes, however, in the most severe cases of infection, inflammatory responses may progress to neurological deficits, delirium, or even coma.

While the immune system plays an essential role in eliminating the pathogen, the cytokines released by immune cells have multiple roles and their activities may therefore disrupt normal brain functioning.

Historically, post-infection neurological sequelae have been attributed to the neuronal death caused by the invading pathogen or the immune response to it during the acute stage. However, while inflammation during the acute stage is localised in brain regions infected by the virus, neurological dysfunction in patients that survive the acute infection can affect brain regions other than the ones initially infected. It may therefore not be directly caused by the virus itself.

Chronic complications from neuroinfectious diseases are actually linked to ongoing inflammatory processes: inflammation, acutely induced by immune responses to infection, persists even after the pathogen was eliminated. Recruited immune cells stay in the brain and may affect cells or regions other than those initially infected. This leads to chronic complications because, while the immune system plays an essential role in eliminating the pathogen, the cytokines released by immune cells have multiple roles and their activities may therefore disrupt normal brain functioning.

Prof Klein and her team study how the activities of persistent antiviral immune cells derail normal functioning of memory so that learning is impaired, and memories are not encoded. They identified cytokines involved in antiviral pathways that regulate synaptic plasticity and neurogenesis, and therefore affect communication between neurons, which results in post-infection neurological sequelae.

T cells and interferon-γ
The hippocampus is a brain structure that plays an essential role in visuospatial learning and memory. T cells (a type of pathogen-specific immune cell) remain in this structure after recovery from infection with both WNV and ZIKV.

Prof Klein examined mice that recovered from WNV or ZIKV. ZIKV replicates mostly in the hippocampus and, after recovery, a loss of neurons and of postsynaptic terminals (parts of a neuron that, at the level of a connection between two neurons – called synapse – receive the neural signal) can be observed. WNV replicates throughout the entire brain and, while there is no sign of neuronal loss, a loss of presynaptic terminals (parts of synapses that send neural signals) was visible in mice that recovered from WNV.

While WNV and ZIKV have different effects on neurons, both viruses can cause a long-term cognitive decline including learning and memory deficits. This suggests that cognitive sequelae rely on a common mechanism.

Interferon-γ (IFN-γ), a cytokine released by T cells that stay in the brain even after recovery from infection, plays a role in targeting viruses, but also influences synapses. Prof Klein reported that mice lacking IFN-γ or the IFN-γ receptor (thus making IFN-γ ineffective) do not display the typical neuronal or synaptic loss, and do not develop any spatial learning deficits.

Microglia and complement
The complement system consists of a number of small proteins that enhance the ability of the immune system to clear pathogens. It constitutes a key component of innate immunity.

Prof Klein and her team study how
the activities of persistent antiviral immune cells derail normal functioning of memory.

The research of Prof Klein’s team therefore explains how viral infection can trigger long-term cognitive decline: T cells remaining in the hippocampus after infection release IFN-γ which activates microglia. In collaboration with the complement system, microglia eliminate synapses, which results in cognitive dysfunction.

Astrocytes and interleukin-1
Astrocytes, star-shaped cells that provide nutrients to neurons and assume other roles, are also involved in the development of post-infection neurological sequelae. Prof Klein and her colleagues showed that, after WNV infection, another cytokine expressed by immune cells, interleukin(IL)-1, promotes the generation of activated astrocytes.

One of the specificities of the hippocampus is that adult neurogenesis happens there: adult neural stem cells evolve into either new neurons or astrocytes. This process is regulated by various factors, including local molecules, exercise, aging and inflammation. IL-1 is one of these factors, causing derailment of neurogenesis in favour of astrogenesis.

IL-1 is a cytokine that regulates a type of antiviral T cell named effector T cells, and that is for example responsible for the onset of fever, which is one of the immune defence mechanisms. It is also involved in spatial learning and memory; after an injection of IL-1, these functions are impaired.

In the context of WNV infection, astrocytes release a high quantity of IL-1, and this results in neurogenesis generating more astrocytes, instead of producing new neurons which are essential for learning and memory. Inhibiting the IL-1 pathway allows normal neurogenesis and resistance to spatial learning deficits.

Towards understanding more viruses,
Prof Klein’s research suggests that targeting IFN-γ or IL-1 pathways, or components of the complement system, could prevent memory disorders during recovery from viral encephalitis.

While most of her work was done on WNV and ZIKV, other emerging viruses activate the same mechanisms and trigger similar neurological sequelae. The team has begun examining the effects of SARS-CoV-2 on brain function, since COVID-19 has been linked to both neurological diseases and post-infectious psychiatric and cognitive impairments. Given that these mechanisms may be generalisable to multiple diseases of cognition, and that there are no treatments that reverse memory deficits, there is a pressing need to understand how viral infections lead to diseases of progressive pathological forgetting and gradually cause dementia, and how to prevent that.

Because of the various roles played by IFN-γ or IL-1, do you think it could be possible to target these pathways to prevent memory deficits without causing too many side effects?

<> We have treated acutely infected mice with Anakinra, an FDA-approved drug for arthritis, and demonstrated that only four days of treatment prevented the development of spatial learning defects. Thus, we know it may be possible to antagonise the IL-1 receptor for the treatment of post-infectious cognitive dysfunction. However, we have also shown that IL-1 is critical for viral clearance during acute WNV encephalitis in mice. Thus, it is possible that targeting IL-1 could limit virologic control, which could be extremely detrimental to patients acutely infected with WNV or other viruses. 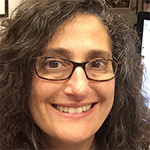 Robyn S. Klein received her BA with honours in Biology from Barnard College, Columbia University, a PhD in Neuroscience and an MD from Albert Einstein College of Medicine. She completed an internship and residency in Medicine at the Brigham & Women’s Hospital, a clinical fellowship in Infectious Diseases at the Massachusetts General Hospital, and post-doctoral training in Immunology, all at Harvard University. Dr Klein joined the Washington University School of Medicine (WUSM) in 2003, where she attained Professorships in the Departments of Medicine, Pathology & Immunology, and Neuroscience. She has served in the Directorship of the WUSM Medical Scientist Training Program, as President of the WUSM Academic Women Network, and continues to mentor junior faculty through the WUSM Family-Wise Mentoring Program. Dr Klein has served as Vice Provost and Associate Dean for Graduate Education, the latter of which overseas the Division of Biology & Biomedical Sciences, and founded and Directs the Center for Neuroimmunology and Neuroinfectious Diseases.

Prof Klein studies virus-mediated memory disorders with the goal of identifying biomarkers and therapeutic targets for prognosis and treatment.

The role of testosterone in SARS-CoV-2 infection
Health & Medicine
Read This Article
Changing climate: A ‘threat multiplier’ for foodborne and waterborne infectious diseases and antibiotic resistance
Biology
Read This Article