Thought Leaders
The use of psychedelics as a tool to aid psychotherapy is controversial, even in 2020. But some psychiatrists think psychedelics could be used effectively and safely to enhance the treatment of patients with a range of mental health issues. Consultant psychiatrist Ben Sessa is one such doctor, and he has been conducting research and gathering evidence in this area since the early 2000s.

The Interdisciplinary Conference on Psychedelic Research aims to bridge the gap between the many academic disciplines that have important contributions to make within the field of psychedelic studies. One of the speakers at this year’s conference, taking place on 24–26th September in Haarlem, Netherlands, will be Ben Sessa, consultant psychiatrist.

Sessa has been working in psychedelic research for nearly a decade and a half, and is currently running a world-first study into the use of MDMA and psychotherapy in the treatment of alcoholics. MDMA is a popular club drug which is also known as ecstasy but Sessa is interested in its ability to help people discuss topics they might not talk about normally. In this interview Research Outreach finds out more about his current project and how this field of research has developed in recent years.

Hi Ben! To begin with, could you tell us a little bit about yourself and describe the focus of your work?
My name is Ben Sessa and I’m a consultant psychiatrist. I’ve been a doctor since 1997, working as a consultant psychiatrist in child and adolescent psychiatry for about seven years before moving into adult addiction. For the last 13 years I have been working in psychedelic research. I first started out with Professor David Nutt when he was in Bristol in 2007, and then have continued working with David in Cardiff, Bristol and now at Imperial College London. I’ve worked on studies with LSD, psilocybin, DMT, ketamine and MDMA. We’re just in the process of running the world’s first addiction study using MDMA-assisted psychotherapy in the treatment of alcohol use disorder. I’m also lead therapist on a Bristol-based psilocybin-assisted depression study, which is run by a group called COMPASS Pathways, and I do some medical legal work, run a private practice and am a cannabis prescriber, one of only half a dozen in the country.

I’m pretty certain within five years there will be a psychedelic therapy clinic in every major town throughout the world.

Can you give us a short insight into the study on MDMA-assisted psychotherapy for alcoholism?
I wanted to work with MDMA and almost 99% of the work that’s been done so far has been on post-traumatic stress disorder (PTSD). We know that MDMA works very well for trauma, and I knew that trauma was very heavily represented in people with alcohol use disorder. So we put two and two together and thought, ‘maybe MDMA will work for alcohol use disorder’.

We have now finished the clinical part and are no longer dosing any patients. We have 14 patients in the study. It’s an eight-week course of MDMA-assisted psychotherapy, two sessions with MDMA and then preparation and integration sessions either side of those. We follow them up at three, six and nine months, looking at drinking behaviour, quality of life and other mental health issues. At the moment, we are collating all the data and are hoping to publish in the summer. So far it’s looking fantastic. We did an observational treatment-as-usual study before starting the MDMA-assisted therapy, looking at a cohort of twelve people from Bristol undergoing alcohol detoxes. According to the outcome study, at three months 76% of patients had relapsed back to drinking which is a pretty typical, poor outcome. In the comparable study with MDMA, 6% had relapsed during the same time span. The next step is to do a randomised controlled trial to confirm findings.

You’re speaking at the Interdisciplinary Conference on Psychedelic Research in September. For psychedelic research generally, what do you think are the biggest challenges?
I think funding is the biggest challenge; getting ethical approval for these studies is by far the easiest bit. If you’ve got a good, well-designed study that’s being run out of a research unit, ethics are no problem at all. The problem is the money; 99% of human pharmacology research comes from the pharma industry. If they come up with a new molecule, they can afford to throw $40 million at it and they can afford to lose that. If it happens to stick and it turns out to be the next Prozac or the next Viagra, they’ll make $40 trillion. Who’s going to throw $40 million at a compound like MDMA, psilocybin or cannabis, that’s off-patent and which nobody owns?

More crucially, treatment with psychedelics enables the patient to eventually come off medication altogether. From a financial point of view as a drug company, that is a terrible proposition.

Do you see the funding landscape changing in the future?
We are in the most extraordinary place in psychedelic research right now. For the last 15 years it has just been old academics like me scraping together a few pounds to get a grant or some charitable money to run a research study. Now the whole space is swimming with billionaires, throwing money left, right and center because they’ve all suddenly woken up to the possibility there might be lots of money to be made. I really can’t tell you what’s going to happen next. There’s a public desire for psychedelic therapy. I’m pretty certain within five years there will be a psychedelic therapy clinic in every major town throughout the world. They will be up there with all the other private medical clinics, or like the cannabis industry in California, Australia or Canada.

Politics – unlike science – doesn’t appear to operate from an evidence-based perspective. This makes encouraging policy change a massive challenge.

Psychedelics are banned and demonized substances. Do you think that will change soon?
I’m driven by the evidence-based data about these being safe and efficacious compounds to treat my patients. I don’t like maintenance therapy with antidepressants like selective serotonin reuptake inhibitors. They don’t work and they cause harm. I think psychedelics are the most innovative, effective and safe psychiatric medications to come out of psychiatry for 50 years. I don’t consider that idea to be maverick, or outspoken, or even controversial. What’s controversial is to not research these things. There has been a shift in both public opinion and within the medical profession and I think that’s because everyone is waking up to the fact that current treatments aren’t good enough.

You’ve done a lot of work around addiction. Do you think people understand what it is that drives somebody down that route?
There’s still an unhelpful and stigmatising narrative that you should just be able to pull your socks up and get on with it. We’ve got a lot of work to do within science to tackle that. From a health economic point of view, for every pound you spend on addiction services, you save four because if you don’t look after these vulnerable people, they break into your car, they go to prison (costing £45,000 a month), they have to have their legs amputated, they have to have liver transplants. The general public have come around to that. In my work as a child psychiatrist, I realised we have all this understanding and empathy for a little three-year-old kid who’s being abused. What happens to that little kid when he’s 13 and he starts wearing a hoodie and nicking your car? It’s the same kid that we used to have sympathy for, but they’re suddenly public enemy number one because they’re buying and selling crack cocaine and stealing your car to do it. It’s poor science to not recognise that developmental trajectory. The effect of damage, maltreatment and abuse during childhood and adult mental disorders, particularly addiction, on offending behaviour is so strong, yet we ignore it as if it’s a moral issue. It’s just not, it’s science.

You were in the BBC documentary Drugsland and your work has been picked up by other external media outlets. How important is it to you to get the message out there to the public about your work?
It’s very important if we’re going to tackle this stigma and move psychedelics out of the erroneous position they’ve been in for the last 50 years. What David and I have come to realise is that evidence-based scientific data alone is not going to work. We’ve been dumping piles of data onto the Home Secretary’s desk for 15 years and it’s got us nowhere. Politics – unlike science – doesn’t appear to operate from an evidence-based perspective. This makes encouraging policy change a massive challenge. That means we need to be shrewder and attack this from other angles with good media, with good representation within fiction, films, soap operas and books, normalising psychedelics. That’s what really worked in the US, for example, with medical cannabis.

Is there anything that you think is an important message you’d like to get out?
One thing that’s really interested me in the last year is the backlash coming from the psychedelic community about the medicalisation of psychedelics. There are some voices within the psychedelic community who object to the likes of COMPASS Pathways or MAPS doing what they’re doing, and they speak in very idealistic terms: ‘Get your hands off our magic, sacred molecules that belong to Earth and not the medical industry.’ I see this as a clinician which gives me a different perspective. The vast majority of people out there are not prepared to break the law. They’re only going to use these medicines when they are approved by someone in a white coat. When people complain about the medicalisation of psychedelics and organisations like MAPS and COMPASS taking over the space and making it exclusive, it’s actually the opposite. It’s the current situation that’s incredibly exclusive. You need to have a lot of money and be prepared to break the law to get into psychedelic therapy these days. 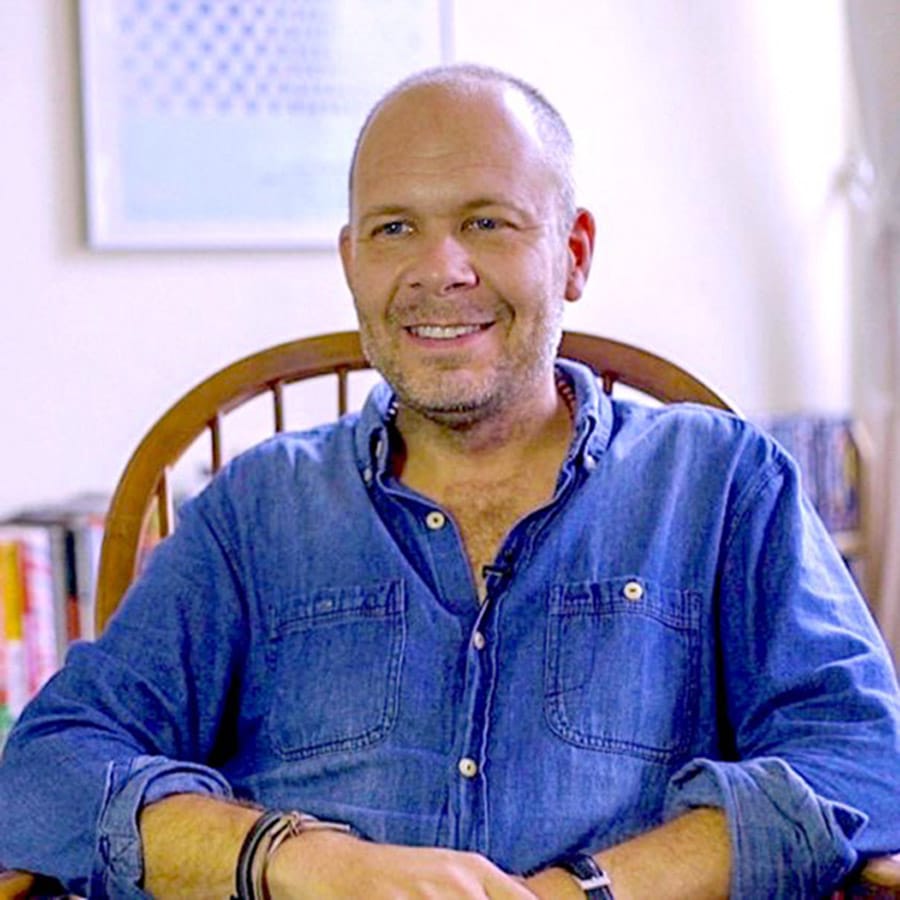