It first entered the Thai market over ten years ago, and today Riceberry rice is known amongst consumers for its distinctive appearance, nutritional value and numerous health benefits. Developed at Kasetsart University’s Rice Science Centre in Thailand with the help of Apichart Vanavichit’s research team, consumption of the whole grain promises a sustainable solution to several non-communicable diseases, namely food related chronic diseases. Its rich purple pigment, like most super foods, is associated with the abundance of phytochemicals, in this case over 80 antioxidant compounds.

Whole grain Riceberry rice entered the Thai rice market over ten years ago and is well known for its distinctive appearance, nutritional value and numerous health benefits. Very popular among vegetarian, vegan, and health-conscious consumers, it is positioned as an organic food and has excelled in premium markets, gaining a high price. An ideal source of complex carbohydrates, dietary fibre, vitamins, minerals and antioxidants, Professor Apichart Vanavichit and his research team at the Rice Science Center, Kasetsart University show that the wholegrain offers many additional health benefits.

The researchers initially developed Riceberry with the aim of boosting nutritional values, fragrance and the taste of rice. Riceberry was developed from a cross between two renowned Thai rice strains: Jao Hom Nin, a Thai non-glutinous purple rice, and Khoa Dawk Mali 105 (Thai Hommali rice). The purple-black coloured grain was developed by Prof Vanavichit’s team in 2002 and several years of integrated research into its nutritional properties, anthocyanin stability, and physical and cooking properties followed. To date, there are 65 research projects focused on Riceberry with 39 patent applications and 18 endorsed patents. Notably, Riceberry bran is loaded with powerful antioxidants, anti-inflammatory agents and vital health-promoting compounds that can help to lower the risks from disease. 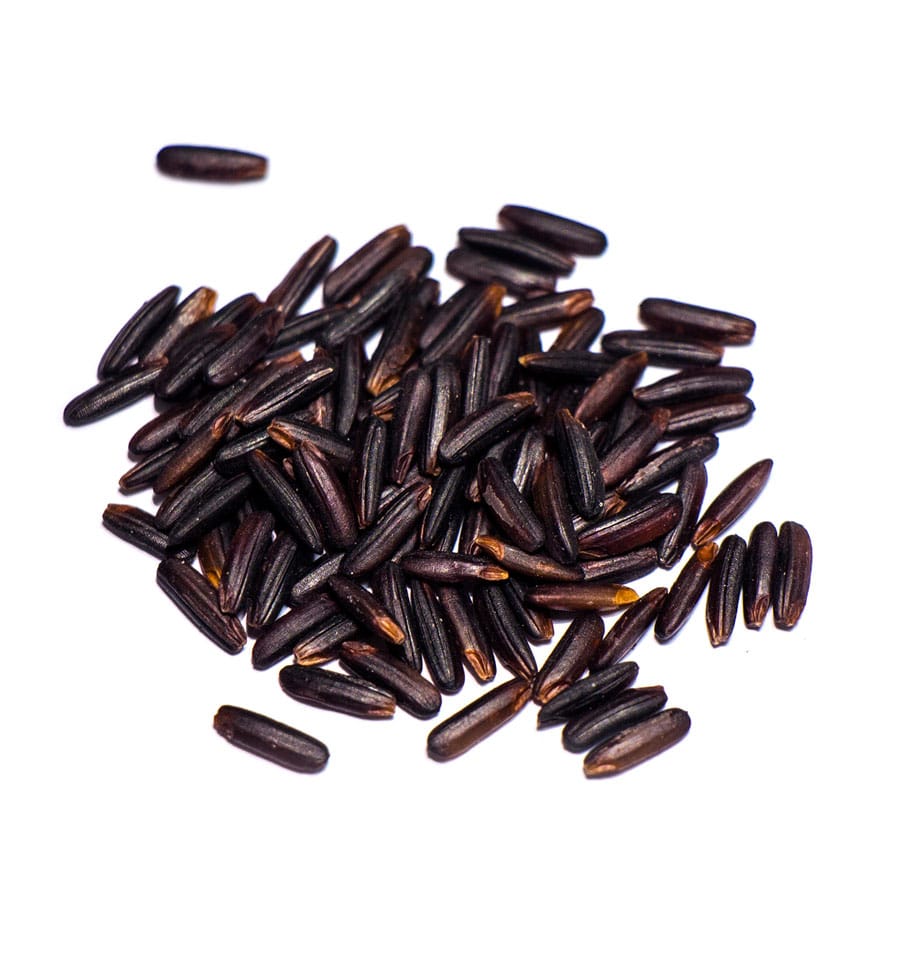 Certified organic Riceberry rice valleys have been established in 12 focus areas around the north and northeast of Thailand where the climate is favourable for the growth of high-quality rice. Today, there are approximately 20,000 Rai of Riceberry registered to a variety of organic certification programmes including transitional, organic Thailand, IFOAM, EU, COR, and USDA (1). The investment return for this farmland is estimated at 6,500 Thai Baht (THB) per Rai with the benefits averaging 32,500 THB per season (1,354 $ per hectare). In total, the return of research investment was estimated to be approximately 600 million THB.

Riceberry has been endorsed under the plant variety protection law since 2017 and trademarks have been registered successfully both in Thailand and internationally under the Department of Intellectual Properties since 2011. Whilst these are owned by public institutes, they can be licensed for use in the global market.

Riceberry is popular amongst farmers as it doesn’t require commercial rice milling but is sold in its whole grain form. Consumers are spoilt for choice with over 108 brands of Riceberry rice on supermarket shelves. With a smaller acreage than Thai Hommali Rice (THM), Riceberry has been used to develop over 66 products. When compared to other products developed from THM, red rice, and other purple rice, Riceberry products have seen a rise in sales beginning in 2013, outperforming THM between 2017 and 2018. The Riceberry farmer stands to gain an average of 10-20 THB more per kg of Riceberry sold. This successful product development has been attributed to its appealing taste and vibrant purple colour as well as its biochemical properties and potential medical benefits.

Light brown rice bran contains leucoanthocyanin; red rice holds cyanidin-3-glucoside anthocyanin; and navy blue rice has delphinidin-3-glucoside anthocyanin. The bran is also rich in other compounds including dietary fibre, proteins, lipids, phytosterols, vitamins, minerals, antioxidants, anthocyanin, and polyphenols. This has made it a subject of research as scientists aim to discover new biologically active compounds or phytochemicals hidden within the thin cell layers wrapped around the endosperm of the rice bran. The extraction of these bioactive compounds can be carried out with the use of solvents, enzymes and a variety of ultrasonic assisted methods.

Chemoprotective compounds in purple rice
Dichloromethane and methanol extraction of Riceberry rice reveals the presence of chemoprotective compounds in Riceberry bran including beta-carotene and lutein, which are not found in white rice. Additional compounds – polyphenol, tannin and catechin levels in Riceberry were found to be 3-10 times higher than those in normal brown rice. Most impressive of all are the high levels of vitamin B1, B2, B3 and B9 in dark purple Riceberry. Notably, 100g of Riceberry contains 48 µg folate (vitamin B9). Flavones found in Riceberry such as apigenin, phytosterols, and triterpenes like lupeol have been shown to confer chemoprotective properties in a variety of human cancer cell lines including Caco-2 (colon cancer), MCF-7 (breast cancer) and HL-60 (leukemia) with the most notable effects being on the HL-60 cell line (3). Specifically, the compound gramisterol has been shown to prevent acute myelogenous leukaemia (AML) by increasing IFN-γ production which in turn protects the dysfunctional immune system of leukaemic mice by enhancing transcription signal controlling proliferation and functions of hematopoietic cells in the spleen. Together with IFN-γ, gramisterol efficiently facilitates leukemic mice immune system modulation leading to an improvement of the AML condition (4).

Even though HRBE could induce cellular apoptosis and senescence in colon cancer cell lines, the anticancer mechanism and cellular characteristics were different depending on the stage of cancer. This finding will be useful and applicable for medical research and colon cancer treatment in the future.

Antioxidants and treatment of metabolic diseases
In addition to cancer prevention, studies reveal that the supplementation of Riceberry bran (up to 41%, w/w) in streptozotocin-induced diabetic rats fed a high fat diet ameliorates hyperglycaemia, hyperlipidaemia, oxidative stress and inflammation as proven by effects on biochemical parameters such as blood glucose and insulin levels. It is proposed that these are the effect of increased antioxidant levels on insulin tolerance and reduced B cell apoptosis which subsequently improve liver and pancreas function (5).

Although rice bran contains 8-10% oil, it is a major source of highly lipid-soluble antioxidants such as gramisterol, gamma oryzanol, vitamin E, beta-carotene, and lutein. Hyperlipidaemia is a major risk factor for heart disease and a symptom of many metabolic disorders including diabetes and obesity. Studies have demonstrated that the use of Riceberry bran oil (RBBO) raises the levels of higher density lipoprotein (HDL or good cholesterol) and decreases low density lipoprotein (LDL or bad cholesterol) in streptozotocin-induced diabetic rats. One study revealed that after 12 weeks, RBBO significantly decreased malondialdehyde and restored superoxide dismutase, catalase, glutathione peroxidase, coenzyme Q10 and Oxygen Radical Absorbance Capacity (ORAC) levels in diabetic rats (6).

Recovering organ histology
Another effect of the antioxidants found in Riceberry bran is the attenuation of the antibiotic gentamicin’s hepatoxicity and nephrotoxicity. The antibiotic, which is obtained from the gram negative bacterium Micromonospora purpurea is used to treat a variety of infections. With the looming threat of antimicrobial resistant bacteria strains and dangers of antibiotic use in the immunocompromised, this alternative diet therapy could possibly be used to supplement a variety of conventional medical interventions through its use as an effective nutraceutical. A 2016 study revealed that rice bran extract improved the function and expression of renal organic anion transporter 3 (Oat3) by modulating an antioxidant defence pathway known as NF-E2-related nuclear factor 2 or PKC/Nrf2 in gentamicin-induced nephrotoxicity in rats.(7) A 2017 study investigating the effects of rice bran extract on gentamicin induced hepatoxicity in rats showed Riceberry bran extract significantly prevented the elevation of gentamicin-induced serum levels of the liver marker enzymes, aspartate aminotransferase (AST) and alanine aminotransferase (ALT) (8).

The benefits of Riceberry are undeniable. The organic purple rice boasts an unprecedented 81 antioxidants, and as the medical research field expands, there’s potential to exploit these in a therapeutic context – elevating it from a nutraceutical to a first line treatment. In 2019, Kasetsart University endorsed the Riceberry integrated projects with a Platinum award for topping socio-economic impact in Thailand. Non-communicable diseases such as type 2 diabetes and its cohorts are the main beneficiaries of Riceberry antioxidant mediated recovery of organ histology. However, there remains plenty of work to be done to develop an effective and palatable supplement to complement the current diet therapy approach. Riceberry has made a strong impact on product innovation, economics, and Thai society, promising to connect organic cultivation to healthy food and cosmetic products both now and in the future. 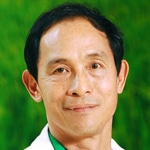 Apichart Vanavichit gained his Ph.D. in crop science and became the director of Rice Science Center. He was the lead Thai scientist in the team that sequenced the rice genome with 9 other nations. His centers have led in the discovery of genes for 2-acetyl-1-pyrroline (aromatic gene). Significant outcomes from his research include a new ideotype rice for organic farming.

The Rice Gene Discovery Laboratory aims to utilise biotechnology as a tool for making improvements in Thai rice. In collaboration with the Rice Science Center, the ultimate goal is to bridge functional genomics with rice breeding. 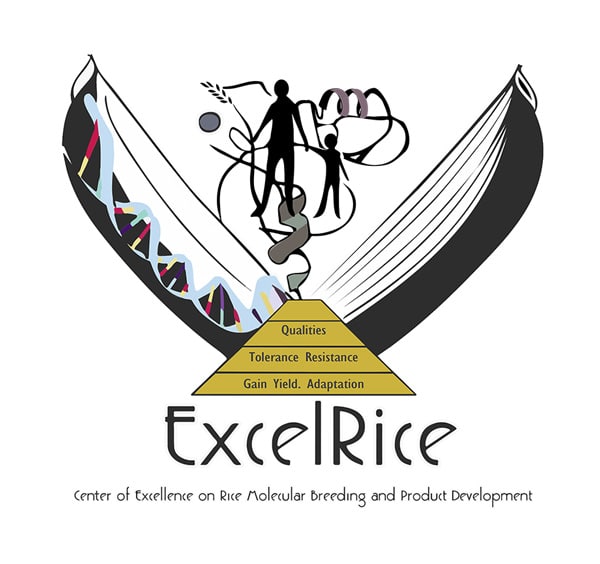