The significant strides to address racial and gender imbalances on university campuses in the United States may have borne fruit, but with unintended consequences. One of those is the shortfall in research into why males – African American males in particular – may underperform at university. Professor James Morris III, formerly at Lewis University, has explored a neglected area of study: how male students perceive their academic performance and the social support from others, and whether this affects their academic performance.

Over the last few decades, there have been significant strides in adjusting decades of racial and gender imbalances on university campuses in the United States. Support programmes to address the lack of diversity in student and faculty bodies, underpinned by proactive and reflective research, have been fruitful. Today, more women, including Black, Indigenous, People of Colour (BIPOC) women, attend college than ever before to the point that, according to the US Department of Education, female students now outnumber male students on college campuses. However, this may have come at a cost: a deficit of interventions geared towards the unique challenges boys and men – especially African American boys and men – face in academic contexts. One researcher has investigated what could be a key psychological relationship influencing academic success for male African American undergraduates.

Dr James Morris was formerly an assistant professor in the psychology department at Lewis University in Romeoville, just south of Chicago, where he trained graduate students in clinical mental health counselling. A series of conversations with two African American students first drew him to what seemed a paradox. Students who demonstrated academic ability didn’t necessarily translate that to academic achievement. This steered him towards a neglected area of research: the link between male African American students’ academic self-concept, how they perceived social support, and the potential impacts these had on their academic performance. His study in this area has unearthed some disquieting insights and sounded a call for further urgent research.

It’s probably fair to say that few students excel without support. This support can come in various forms. There is clear, tangible support, including material services such as financial assistance and access to technology, but it is the more social forms of support that can have the most impact. Emotional support from family, friends, and broader social groupings is essential, as is informational support – the advice and guidance from educators and other authorities. But there are other forms of social support, such as the companionship provided by a sense of belonging and identity. Studies substantiate common sense: the existence, or absence, of support can affect an individual’s academic performance. But what about how students perceive their social support?

The blurred line between perception and reality has fascinated philosophers for centuries, and psychologists are drawn to how we construct our own realities based on perceptions. In the specific field of self-construct and support perception, research shows that girls tend to perceive more social support from their social networks – especially their peers – compared to boys. Girls tend to develop smaller peer circles centred around empathetic support, whereas boys tend to build larger peer circles based on competition. Research also suggests that girls and boys differ in their reactions to social support around academic achievement. Social support in the face of poor academic performance tends to encourage girls to do better, while boys are more likely to be apprehensive. This may have an impact on how girls and boys develop academic self-concept. Given that research also shows that social identity is a significant influence among African American students, could this be at the heart of Morris’ observations that male African American students didn’t seem to achieve the levels their abilities suggested?

Between perception and reality
Morris set out to investigate this in a study among male undergraduates of all races at two private midwestern universities. He was interested in examining the relationship between perceptions of social support and academic self-concept among the students and the relationship between the type of social support they received and perceptions of academic self-concept. His research was not purely academic in purpose. As a specialist in mental health counselling, he saw the value in informing best practices for instructional strategies and training for fellow counselling professionals working in academic and clinical settings, especially those addressing the unique needs and challenges faced by male African American students.

A total of 357 students received a package with a basic demographic questionnaire and two self-assessments. The sole inclusion criteria were that they were male and enrolled as undergraduates at the time of the study. The demographic questionnaire provided ethnic background, age and sex, year in university, intended degree major, and self-reported grade point average. To assess their academic self-concept, a 40-item Academic Self-Concept Scale (ASCS) included statements such as ‘Most courses are very easy for me’ and ‘I am better than the average college student’. The students responded on a scale from 1 (strongly disagree) to 4 (strongly agree). To assess their perceived social support, a 12-item Multidimensional Scale of Perceived Social Support included statements such as ‘My family really tries to help me’ and ‘I get the emotional support I need from my family’. Of the 357 undergraduates targeted, 86 returned completed surveys, of which 76 contained completely valid responses.

This latter insight may seem frustrating for researchers and counsellors looking for a critical influencing point to develop academic self-concept in male students, but they should draw encouragement from the overall outcome. According to Morris, ‘it can now be said with greater clarity that there is a relationship between academic self-concept and social support’. That is true, and the results also help fill the void in research into why male students may underperform at university. As to why specifically male African American students who demonstrate academic ability don’t necessarily translate that to academic achievement, Morris highlights that only 13.2% of the study’s respondents identified as African American. He suggests that similar studies be conducted at universities with a substantial enough population of African American students to focus on that group.

If you were to repeat this study at a university where you could focus purely on male African American undergraduates, what key adjustments would you make?

The psychology of young men with regards to their academic and social interactions guides the scope of my future research, with an emphasis on young men of colour. The major problem that seems likely to arise when considering the correlation between ability and achievement would be recognising the role of perceived social support in the instance of a weakened bond between ability and achievement. Thus, exploring the possibility of strengthening achievement through one’s academic ability and perception of social support represents a noteworthy research endeavour.

Comparative analysis of male BIPOC students’ perceptions of social support and academic concept at predominantly white institutions versus historically black colleges and universities may also be a particularly fruitful area of exploration. Noteworthy, social support primarily entails an issue relative to a person’s external frame of reference. Thus, seeing other people as supportive may aid an individual in the successful navigation of academia. There exist speculations that social support and external frames of reference could mitigate self-doubt, raising a worthy point to address in subsequent research efforts. Moreover, there exists a need for qualitative evaluation of the real-life encounters of the students, to help create an informed understanding regarding their perception of social support. That is, what has occurred in the lived experiences of male BIPOC students may provide important contextual data for themes to be examined in future research through the lens of perceived support and academic self-concept. 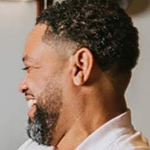 Dr James Morris was an assistant professor in the Psychology Department at Lewis University from 2014 to 2021, where he was largely responsible for the training of graduate students in Clinical Mental Health Counselling. Currently, he is manager of residential treatment services at a behavioural health facility in the Chicago area.