Sickle cell disease is one of the most common genetic diseases worldwide. Occlusion of blood vessels triggers painful crises and leads to various clinical manifestations such as kidney failure, leg ulcers, bowel ischemia, portal hypertension and retinopathy. Many imaging methods allow to observe vaso-occlusion but are limited by cost and availability issues. Dr Oluwagbemiga Ayoola of Obafemi Awolowo University in Nigeria shows that Doppler ultrasonography, a cheap, readily accessible and non-invasive technique, can be used to evaluate vascular health.

Sickle cell disease (SCD) is an inheritable disease affecting haemoglobin structure: haemoglobin, the protein in red blood cells responsible for carrying oxygen from the lungs to every other organ, has a structural defect in SCD patients. Most of the time, SCD patients are in a steady state but, during a painful crisis, the defective haemoglobin gives red blood cells an abnormal sickle shape that affects blood vessels and can have severe consequences. Patients usually don’t know why they are having a crisis, which can start suddenly and last up to several days, but possible triggers include stress, dehydration, changes in temperatures, or being at high altitudes.

Sickled red blood cells are abnormally adherent to artery walls and can cause vaso-occlusion, an obstruction of blood vessels that reduces the blood flow. This leads to ischemia: organs don’t get enough blood and lack oxygen, which results in severe pain in the affected region and ultimately in organ failure. SCD is highly prevalent as, every year, 312,000 people are born with the disease worldwide, with up to 236,000 of these in sub-Saharan Africa. In this region, up to 45% of the population carries the mutated allele.

Several imaging techniques can be used to evaluate vascular health. Dr Oluwagbemiga Ayoola of Obafemi Awolowo University in Nigeria uses Doppler ultrasonography which, unlike other techniques, has the advantage of being cheap, readily accessible, non-invasive, and harmless for healthy human cells. While regular ultrasonography can create images of structures inside the body, Doppler ultrasonography works by measuring sound waves that are reflected from red blood cells or other moving objects.

Blood vessels are affected
Artery walls are made of three layers: an inner layer (called the tunica intima, or intima for short), a middle layer (the tunica media), and an outer layer (the tunica externa). The intima is made of an endothelium (a thin layer of cells) that is in direct contact with the blood flow.

In SCD patients, sickled red blood cells adhere excessively to the vascular endothelium, which results in occlusion in small vessels and in intima-media thickening in arteries, meaning that the artery wall thickens. This affects the blood flow and causes a lack of oxygen which damages the endothelium. The damaged endothelium is unable to function properly – this is called endothelial dysfunction. Endothelial dysfunction, primarily caused by the impaired blood flow, further affects the blood flow. This vicious cycle is the origin of various complications in the surrounding tissues and organs.

The defective haemoglobin gives red blood cells an abnormal
sickle shape that affects blood vessels and can have
severe consequences.

Tools to assess vascular health
Dr Ayoola and his co-researchers use Doppler ultrasonography in different arteries to assess vascular health through different measures. Intima-media thickness (IMT) is a useful measure of the thickness of artery walls. Intima-media thickening due to sickled red blood cells directly impacts this measure: in SCD patients, IMT is greater.

Measuring flow-mediated dilation (FMD) consists in measuring the ability of the vessel to widen when blood flow increases. Vessels also widen in response to poor blood flow to compensate for low oxygen levels. This physiological mechanism is orchestrated by the vascular endothelium. In cases of endothelial dysfunction, FMD is impaired; measuring FMD allows to reveal endothelial dysfunction. In SCD patients, FMD is therefore reduced.

Doppler ultrasonography can also be used to measure parameters such as speed of moving blood within the arteries and resistance to blood flow. Through all these measures, ultrasonography allows to evaluate vascular changes due to SCD.

Chronic leg ulceration
Pathological vascular changes occurring in SCD are also the origin of leg ulceration, a break in the skin which forms an unhealed sore. Using Doppler ultrasound to measure IMT of the common femoral artery, a major artery in the leg, Dr Ayoola and his team found that chronic leg ulceration, a possible complication of SCD, is associated with intima-media thickening: the artery wall of the common femoral artery is thicker in SCD patients with history of leg ulceration than in SCD patients without such history, which suggests that pathological vascular changes play a major role in the formation of these ulcers.

The ability to predict the severity of the disease from measures of vascular changes could contribute to better management of the patients.

Bowel ischemia
The celiac and mesenteric arteries nourish the digestive system. Abdominal pain is a symptom of bowel ischemia, which occurs when these arteries are obstructed by sickled red blood cells during a crisis. Bowel ischemia is uncommon, but it is associated with significant mortality.

The research group used Doppler ultrasound to evaluate the celiac and mesenteric arteries and observed an abnormal narrowing of the arteries that could be related to bowel ischemia. While it was known that bowel ischemia could be caused by the obstruction of small vessels, he showed that vascular changes in the major arteries can also be involved.

Liver dysfunction and portal hypertension
The liver is an organ whose cells, the hepatocytes, carry out various functions mostly involved in digestion. When sickled red blood cells affect hepatic sinusoids (microscopic vessels within the liver), the lack of oxygen due to the reduction of blood flow injures the hepatocytes. This results in liver dysfunction, and, more precisely, in a condition called sickle cell intrahepatic cholestasis where bile, a digestive fluid, cannot flow from the liver to the bowel.

By observing hepatic veins with Doppler ultrasound, Dr Ayoola and his team found that, in addition to causing liver dysfunction, sickled red blood cells can ultimately lead to portal hypertension, an increase in the blood pressure in the portal vein which carries the blood from the bowel to the liver: because blood flow through the liver is impaired, blood cannot enter the liver and mounts up in the portal vein.

Towards a more effective prevention
Working in a developing country where access to some imaging techniques is limited by cost and availability issues, Dr Ayoola shows that Doppler ultrasonography can be an effective tool to evaluate vascular health and to make connections between vascular changes occurring in different arteries and various possible complications.

His research is part of an ongoing quest to unravel the mysteries of the genetic disease that is SCD. The ability to predict the severity of the disease from measures of vascular changes could lead to more effective prevention and may help clinicians to prevent the severe complications that may arise from occlusion of the arteries.

<> I would like to further confirm some of my findings, especially in relation to bowel ischemia where I intend to go a step further to carry out computed tomography angiographic studies on the coeliac and mesenteric arteries and also biochemically ascertain the possibility of these subjects having portal hypertension. We are also considering studying the coronary arteries by carrying out computed tomographic angiographic studies of these arteries. 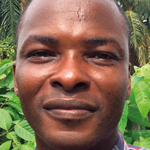 Oluwagbemiga Ayoola is currently a Senior lecturer and the Acting Head of the Radiology Department at the Obafemi Awolowo University, Ile-Ife, Nigeria. His research focus, over the last few years, has been on vascular imaging especially in sickle cell disease.