Most of us are familiar with demonic possession as depicted in popular culture, for example in horror films such as The Exorcist. While these representations are usually exaggerated, they are frequently based on real-life accounts of the phenomenon. Despite widespread academic scepticism, pastoral care and mental health practitioners are becoming increasingly aware of the affliction, and the need for adequate care provision. In her recent paper, Dr Marta Illueca collates the empirical data on spirit possession from the medical and humanities literature, and aims to provide a point of reference to benefit those working in pastoral and healthcare settings.Throughout the past two decades, and despite widespread scepticism, there has been an increase in interest from the academic community on the phenomenon of spiritual distress related to spirit or demonic possession. In her graduate work at Yale Divinity School, Dr Marta Illueca researches the topic of demonic possession: spirit possession by an evil entity. Her background in both medicine and theology makes her ideally placed to inform and advise on this topic. She states that there is no intention to prove or disprove the existence of spirits, the aim is to apply academic rigor as far as possible in reviewing belief in spirits, and their potential role in causing disturbing conditions requiring professional attention. 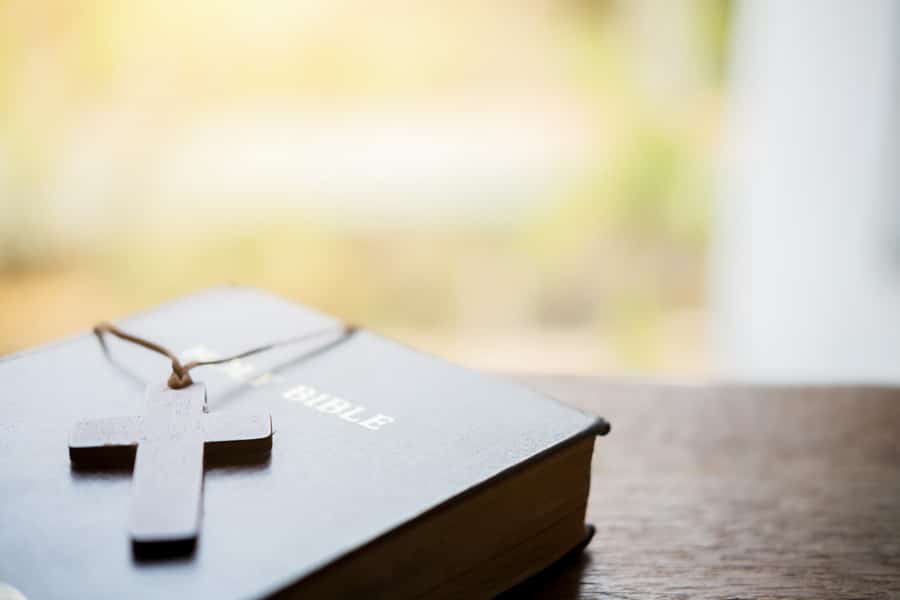 Demonic possession and deliverance ministries
Regardless of medical beliefs related to spiritual afflictions (or lack thereof), the phenomena related to spiritual oppression and demonic possession are real for the affected person. People suffering from demonic possession often experience extreme physical, emotional, and spiritual pain, which calls for attention, careful evaluation, and professional assistance. This could be pastoral care, mental healthcare, or a combination of both depending on the individual needs. Determining the kind of care a person requires can be difficult because they may present with symptoms that are characteristic of both demonic possession, and mental health disorders. Practitioners often fail to discern what a patient needs, i.e., medical attention and psychiatric diagnosis, or spiritual intervention. The consequences of misdiagnosis can compromise well-being, and lead to social stigma.

Spirit possession should not be seen
as an isolated rare spiritual condition but rather as a spectrum of manifestations of increasing complexity.

Dr Illueca notes that formal research and empirical data are sparse, which has led to a misrepresentation of those with genuine problems, based on depiction in popular culture such as horror films. For this reason, academic work such as hers is desperately needed so that those with spiritual afflictions can be protected from social marginalisation and receive the professional care they need. In cases suspected of demonic possession, individuals should be referred for pastoral care, which may include the use of deliverance ministries. This is a collective term used to describe prayer-based interventions that act to cleanse a person of demons and evil spirits, and aid, in multi-disciplinary fashion with the physical, psychological, emotional, and spiritual problems that are attributed to them. The interventions can range from specific deliverance prayers, to ritual-based exorcism reserved for the extreme, rare cases of possession. The deliverance team is a multi-disciplinary group that often includes ministers, social workers, and psychologists.

One classical characterisation of spirit possession appears to lie in the scriptures of the Judeo-Christian Bible where spirits are described as benign e.g., the Holy Spirit, or malignant e.g., Satan/the devil. While it is commonly believed that the devil is mainly a by-product of the New Testament (the Christian portion of the Bible), in the Old Testament’s Book of the Law called “Deuteronomy” the existence of demons as antagonistic to God is cited. For believers, there is potential for influence from either type of spirits, for example in the Gospel of Mark, Jesus was “driven” to the desert by the Spirit of God where he was tempted by a malignant spirit, the devil. Although empirical literature is limited, a spiritual syndrome appears to manifest along a spectrum ranging from spiritual vexation, obsession, oppression, and finally demonic possession. These various manifestations all affect the victim’s behaviour and in extreme cases dominate the person’s overall being. The term spiritual infestation is used by Dr Illueca as a description comparable to a parasitic or microbial contamination. In the worst cases the evil spirit controls and uses the body as if it were its own. It takes deliverance prayers, or in extreme cases, exorcism, to relieve a victim from this state of possession.

Dr Illueca’s scholarly paper tabulates the key empirical data on the demographics, natural history and use of exorcism in cases of spirit or demonic possession. Acknowledgment of spirit possession in the pastoral and psychology literature is increasing, and the phenomenon of demonic possession is described worldwide across cultures and continents. An early study by Bourguignon (1973) suggested North and South America to be most prominent in their belief in spirit possession. Knowledge and understanding of local ritual practices is important for discerning whether spiritual or psycho-social assistance is needed.
Mainstream Christian religion is becoming more organised around the practice of deliverance ministries with formal training and credentialing of exorcists. One of the fundamental roles of deliverance ministers is to ascertain whether the affliction observed has a spiritual basis. The Roman Ritual (the original official ritual work of the Catholic Church compiled in 1614) explains traditional signs of demonic possession based on early Christian sources and practitioners’ observations. Although the supportive scientific proof is limited, there is consensus within deliverance ministry circles around the distinct characteristics of these signs, and they are still used today as criteria for diagnosis. The four criteria are: newly developed fluency by the patient in a foreign tongue; knowledge of hidden things such as identifying hidden objects or private details related to those present; supernatural strength that is disproportionate to the size of the person; and an aversion to sacred objects such as the Christian cross, Holy Water or the Bible. When all four of these are present, they are considered to be specifically indicative of demonic possession. Anti-gravitational abilities (i.e., levitation) have also been reported as a rare sign. Large scale recent research in Low and Middle Income Countries (LMIC) has shown that people with a history of childhood abuse or severe trauma are particularly vulnerable (Hecker et al, 2015) as are those who dabble in occult practices (e.g. Ouija boards, cultic groups, etc.). 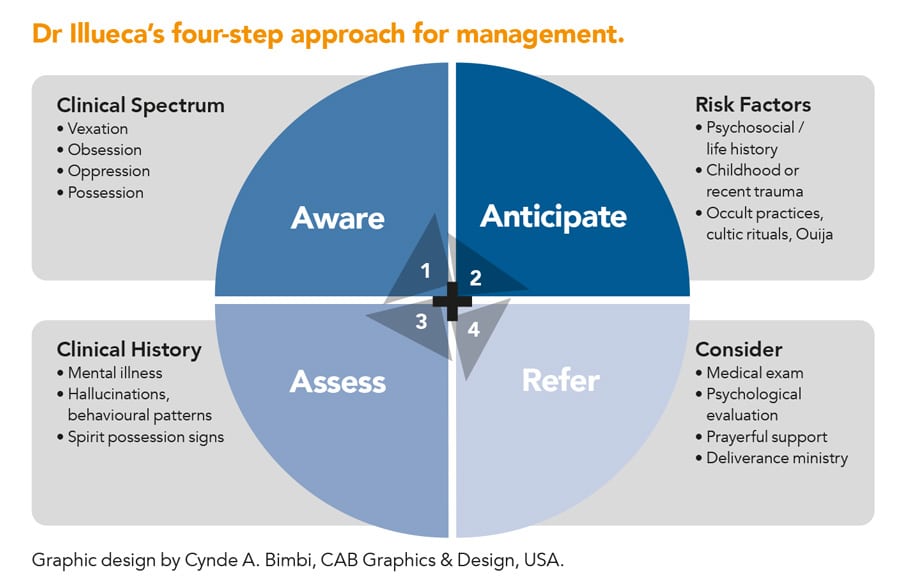 Psychiatric and spiritual conditions may overlap, and each requires accurate diagnosis in order to tailor treatment and avoid the potentially dangerous consequences misdiagnosis can lead to. In contrast to spiritual afflictions, psychiatric disorders are diagnosed by medical professionals who use a specific set of criteria to do so. For example, in the case of dissociative identity disorder (DID) formerly known as multiple personality disorder, dissociative symptoms (e.g. trance-like states) are considered a defining characteristic. The potential for confusion between spirit possession and dissociative states is high because in DID one or more alternative personalities may take over the behaviour of the patient. Other overlapping symptoms include prolonged memory gaps and hallucinations, and both often present with a history of complex childhood trauma. There is a similar potential for  confusion with schizophrenia, where delusions and paranoid hallucinations are also common.

A misdiagnosis can have dire social stigma and emotional consequences for the victim and their loved ones.

Both pastoral and medical professionals are relied upon to carefully evaluate, diagnose, and direct treatment to the most appropriate provider. Regardless of their own personal beliefs, a provider must take each consultation seriously, keeping in mind the deep degree of real suffering these conditions represent for those afflicted. Having reviewed the available medical data and spiritual literature, Dr Illueca recommends a four-step approach to the assessment and management of spiritual distress for people who believe the cause to be the influence of evil spirits. The first step is awareness; of the reality of spiritual distress, and the spectrum of manifestations. The second step is anticipation; of the likelihood that a care-seeker may fall on the spiritual possession spectrum based on their presentation (symptoms, background, life history). The third step is critical assessment of the clinical evidence, noting whether symptoms may indicate a psychological condition. The final step is referral, based on the assessment, to the most appropriate service.

Summary
The work of Dr Illueca collates the current literature and academic research on spirit possession and highlights the need for careful differential diagnosis between psychiatric cases, and demonic possession. She emphasises the importance of empathy, care, and faithful perseverance across the four steps she recommends, in helping restore the affected person to wellness. It is hoped they will serve as useful guidance for practitioners faced with discerning the nature of spiritual maladies presented to them. The paper ends with a call for further research on deliverance ministries, and diagnostic approaches to spiritual afflictions with the aim of improving the lives of the suffering and those caring for them. 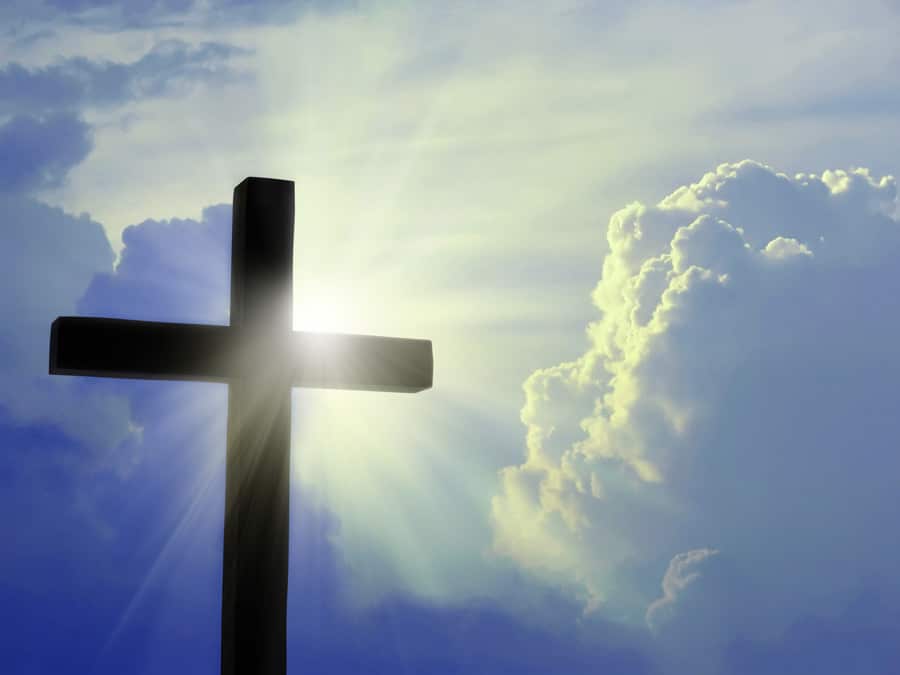 Do you encounter conflict between your medical training and your theological investigation, particularly relating to this area?

<=”acceptedAnswer”> Rather than conflict, what an inspirational challenge, engaging in conversation between my medical training and theological investigation. With my lifelong medical experience, I am blessed to witness new unprecedented scientific insight into the previously unexplored areas of spirituality and health. For instance, the new empirical evidence emerging from neuroimaging research (e.g., functional magnetic resonance imaging- fMRI) allows for the mapping and characterisation of spiritual practices as they trigger a variety of measurable responses in the human brain. Through rigorous, judicious scientific research, we will likewise continue to elucidate the puzzling nature of spirit possession phenomena. 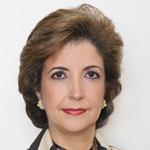 Marta Illueca, MD, MDiv, MSc is a physician and an ordained Episcopal priest who holds master’s degrees from Yale Divinity School and Tufts University School of Medicine. Her career spans three decades including Pediatric Digestive Diseases at Weill-Cornell Medical College, New York, pharmaceutical research and she is a Fellow of the American Academy of Pediatrics. Her current research centres on spiritual wellness and the use of prayer for the management of pain.

This paper was written in fulfilment of course work at Yale Divinity School, New Haven, USA under the supervision of Prof Janet Ruffing.

3 thoughts on “Spirit possession: Perspectives on pastoral assessment and care”