Earth & Environment
To many, if not most, the word ‘forensics’ invokes images of the very small – DNA, fingerprints, etc., – but for Professor Shanaka de Silva and his colleagues at the College of Earth, Ocean, and Atmospheric Sciences, Oregon State University, ‘forensics’ is being used to investigate something altogether bigger. The team is using a multidisciplinary approach to reveal the secrets of ‘supervolcanoes’ and supereruptions, calling on expertise in the fields of geophysics, geochronology, petrology, geochemistry, and numerical modelling.

Next to asteroid impacts, supervolcanoes are the most catastrophic natural hazard on Earth. On average, supereruptions have occurred on Earth approximately every 100,000 years, blanketing surrounding regions with thousands of cubic kilometers of volcanic material and affecting the global climate. During these eruptions, collapse of the magma chamber roof leaves a caldera (a crater tens of kilometers in diameter). In the following decimillennia, the volcano recovers as magma readjusts to the disturbance (rather like the surface of water when something is dropped into it) causing the ground above to swell (‘uplift’) and deform – a process known as resurgence. Earthquakes, lake tsunamis and fresh eruptions characterise this recovery, posing significant and continuing hazards.

Next to asteroid impacts, supereruptions are the most catastrophic natural hazard on Earth

The potential impacts make understanding supervolcanoes a task of the utmost importance, and one that is being tackled by Professor Shanaka de Silva and his colleagues at the College of Earth, Ocean, and Atmospheric Sciences, Oregon State University. In particular, the group are addressing a number of questions:

Pieces of the puzzle
Professor de Silva and his colleagues are gathering information using different scientific techniques – an approach they have termed Supervolcano Forensics – at calderas around the world. Students and postdoctoral researchers have conducted much of this ground-breaking work, examples of which include:

The work of Professor de Silva’s group, grounded firmly in field-based observation of the deposits and stratigraphy (the relative temporal and spatial relation of events) is showing that supervolcanoes are surface manifestations of crustal scale magmatic activity. The development and longevity of supervolcano magmatic systems depend on the interplay between heat transfer and the mechanical strength of the crust. Without this feedback, magma could not be stored in large volumes; it would erupt in small events, or solidify too early. This in turn controls the eventual size of the eruptions and calderas.

As an integrative framework and with an eye to hazard assessment, Professor de Silva and his colleagues are developing a simple model that frames calderas behaviour as a reaction to changes in the balance of forces in the crust and magma system. In this model, the caldera cycle is a continuous loop. An exciting possibility is that since the temporal and spatial scales of deformation associated with pre-eruptive development of large magma systems is quite different from those associated with restlessness, the transition from resurgence and restlessness to pre-eruption build-up could, in principle, be detected. Part of the challenge is nailing down the temporal and spatial scales of the different stages and their surface representations.

New research focus
To specifically improve understanding of resurgence and restlessness, Professor de Silva and his team have now turned their attention to Toba, Indonesia. Approximately 74 ka (thousand years ago), Toba experienced the most catastrophic eruption of the last 100,000 years, during which at least 2,800 km2 of magma was erupted (that is 28,000 times the amount erupted during the 1980 eruption of Mt St Helens!), forming a caldera 30 km wide and 100 km long. Since then, the caldera floor has experienced well over 1 km of vertical uplift, forming the island of Samosir. This project, which won the support of the National Science Foundation, aims to test the hypothesis that resurgence is fed by magma left over after the climactic eruption.

So far, graduate student Adonara Mucek has used geochronology to date zircon crystals and lake sediment deposits, revealing that resurgence began at least 30 ka and continued until at least 2.7 ka. Eruptions fed by remnant magma rejuvenated by fresh magma from deep continued for at least 20,000 years after the climactic eruption. New work by graduate students Katharine Solada and Jade Bowers is further constraining lake sediment history, and expanding our understanding of resurgent eruptions, including possible relationships with the actively erupting Sinabung volcano.

Where (and when) will be the next supereruption?
<>The most likely place for a future supereruption is a location where there has been such an eruption in the past. We know that large calderas like Toba and Yellowstone have had multiple eruptions in essentially the same location. If the factors that led to their formation and evolution remain the same (largely controlled by plate tectonics), these calderas are the most likely location.

Current statistics suggest that the Earth experiences a supereruption (Magnitude, M 8) approximately every 100,000 years. However, there have been at least two such eruptions in the last 74 ka, and it is likely that our inventory of Earth’s supereruptions is incomplete. Calderas appear to be cyclic, but their periodicity varies rapidly. Our best strategy is to be vigilant at the currently active systems and pay attention to volcanic areas around the Earth that have shown this type of activity in the last two million years or so.

What would be some of the local, regional, and global impacts of a supereruption today?
<>Our understanding is that everything within a 100 km radius will be devastated by pyroclastic flows. Beyond this, depending on the prevailing winds there could be continent scale impacts on transportation, power infrastructure, water resources, and agriculture. Communication will almost certainly be limited and air traffic limited due to airport inoperation. Global impacts are debated, but it is commonly thought that significant cooling (due to atmospheric aerosols) for many years that will adversely impact agriculture, the food chain, and human activities is the most likely global impact. Given the interconnectedness of the global economy, a supereruption in any part of the globe is likely to be a global “Black Swan” event.

What is the radius of total destruction for a supereruption?
<>About 100 km is a generally agreed value.

How far away could you be from a supereruption and still hear it?
<>The M 4.5 1883 eruption of Krakatau is often quoted as the loudest sound ever produced on Earth. It was apparently clearly heard up to 3,000 miles away and the pressure spike (an acoustic wave) created by the eruption was recorded around the globe for about five days. So technically the “sound” of this eruption was heard around the world for several days. A supereruption is at least 1,000 times as intense as the Krakatau eruption, therefore, the “sound” could be expected to be significantly “louder” and intense.

What new technologies and/or scientific advances will help us to better understand supervolcanoes?
<>We are still in infancy when it comes to understanding volcanoes, not just supervolcanoes. Critical to understanding this is what is happening in the magma systems. While we are beginning to understand some of the signals volcanoes broadcast, the problem with supervolcanoes is that they operate on much longer time scales than normal volcanoes and over much larger spatial scales. This is a huge challenge, but advances are being made on several fronts from understanding how magma systems are built and evolve, the time scales over which these systems develop, the rates and time scales of magmatic processes, and what leads to eruption versus storage. While we are improving our ability to read signals from restless calderas, two as yet insurmountable challenges are to predict exactly when (if) an eruption will occur and how big it will be. Methods and technologies that help answer these two questions are critical. One exciting area of development is the use of satellites to measure signals associated with volcanoes. Given the global distribution of restless calderas and the long time and spatial scales over which they operate, constant surveillance and measurements by satellites maybe a key direction in our effort to understand supervolcanoes. 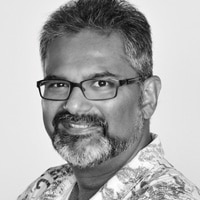 Shanaka de Silva is a Professor of Geology and Geophysics at Oregon State University. With fieldwork as a point of departure, Shan, students, and collaborators have adopted a “forensics” approach to understanding supereruptions and supervolcanoes in the Central Andes, Japan, China, Sumatra, New Zealand and the Italian Alps.

Professor Shanaka de Silva and his many collaborators are currently investigating the most devastating natural events on Earth, supereruptions. With this project, Prof de Silva and his team are working to gain a clear understanding of the processes and timescales of these supervolcanoes as this is vital for our ability to address potential hazards in the future.