Physical Sciences
The World Energy Council states that the capacity of offshore wind generation installed globally was around 12,000 MW by the end of 2015 with over 92 percent of these installations located in European waters. This will require innovative solutions such as the work being done by Professor Mike Barnes and his team at the School of Electrical and Electronic Engineering at Manchester University, on novel circuit breaker design for offshore power networks. Ultimately, this research could help onshore power networks to supply increased amounts of electricity generated by offshore wind turbines and contribute to future low carbon electricity generation.

Wind turbines are anticipated to have a significant role to play in the future energy mix. Electricity generated from renewable sources currently accounts for around 25 percent of UK electricity demand. Current EU targets mean that by 2020, the UK must generate 30 percent of its electricity demand from renewable sources. Expansion of the UK’s offshore wind capacity has been proposed as one means of achieving this target. Development of new and improvement of existing technology is required to support this proposed growth.

The research being undertaken by Professor Barnes and colleagues could help in achieving this target. They aim to improve circuit breakers for offshore wind installations that could facilitate greater flows of energy from increasing distances offshore whilst ensuring the protection of existing power networks onshore. Professor Barnes has been heavily involved in several large collaborative wind energy research projects funded by the European Union since joining Manchester University in 1997. His current research into circuit breakers forms part of a three-year research project funded by the Engineering and Physical Sciences Research Council.

Harnessing wind power
A wind turbine can extract up to 60 percent of the power from the wind but because wind-speed varies, it is necessary to convert the alternating current (AC) output from the wind generator to direct current (DC) before converting it back to AC at a frequency that matches the onshore power network. Another advantage of this temporary conversion to DC is its potential for power transmission over greater distances with lower cost than is possible for an AC system. This combined with the configuration of the power system are important considerations if turbines are to be located at greater distances offshore in future.

Current EU targets mean that by 2020, the UK must generate 30 percent of its electricity demand from renewable sources

Conventional “point-to-point” networks involve each offshore wind generator being connected directly to the power network onshore. With an increased amount of installations, this method is anticipated to be prohibited by cost and technology limitations and therefore unsuitable to meet planned future expansion. The alternative option being explored relies upon the DC component of the network comprising a “meshed” grid configuration where connected wind farms share pathways to the AC converter onshore. If a fault develops in the DC meshed network, discrete parts of the network can be isolated whilst power flows are maintained in the remainder of the network.

One of the key challenges to reliably operating this meshed configuration is how to stop current flowing in the event of a problem. Isolating DC with circuit breakers is more complex than for AC. AC changes direction cyclically, falling to zero twice during a cycle which provides an ideal opportunity to interrupt current flow. However, DC flows in one direction only so in the DC system, currents must be quickly reduced to zero which requires a more complex breaker. The pertinence of Professor Barnes’ research is clear: there is a pressing need to develop responsive and economic circuit breakers that quickly stop current flowing if a fault develops within a DC system without detriment to the wider network.

Improving existing provision
Should a fault develop within the DC power network, it is necessary to limit the flow of current as quickly as possible to prevent other parts of the network operating beyond their design parameters. This is currently achieved using AC circuit breakers which may isolate the entire DC system leading to power loss. This would mean that if a future wind installation comprising of a network of five wind farms was operating and a connection to one farm developed a fault, all five would have to be isolated and no power would flow from the four working systems. The UK power network operates to certain supply quality standards that state that the maximum power loss the network can bear is 1800MW. Presently, any such losses from existing offshore wind farms are within network operating limits but with up to 30,000MW of electricity potentially being sourced from offshore wind in future, isolating larger capacities could exceed this maximum. This would lead to severe impacts and, without mitigation technology, could potentially cause blackouts over parts of the UK electricity network. DC circuit breakers are commercially available and may be used to manage faults that develop in the DC network. However, to maintain power flows, these need to isolate the affected area within two to five milliseconds. Currently available technology cannot achieve the fastest of these constraints and so a new development is needed.

Approach to this challenge
To improve circuit breaking within DC power systems, in addition to thoroughly reviewing the different types of DC circuit breaker currently available, Professor Barnes’ research team will also investigate the potential of fault current limiters. These devices limit or slow the current increases that may occur if a fault develops but have not been widely used on DC networks. The team will also consider the fundamental principles of physics that underpin the design of existing systems and components while examining the materials from which current breakers are composed with the aim of identifying desirable and unwanted attributes of each.

Circuit breaking within a DC power system may be achieved mechanically using switches. However, these are currently limited by their operating time. Solid-state breakers that use semiconductors technology are an alternative option; they operate more quickly than mechanical breakers but have higher losses which compromise system efficiency. Hybrid systems which use the best characteristics of mechanical and solid-state breakers show potential but are currently not sufficiently reactive. The outcome of this research will be to propose novel and improved methods for circuit breaking on future DC networks which could in turn support increased development of offshore wind.

How did you become interested in power networks?
<>What modern electronics can do is amazing: from healthcare to entertainment to transportation. As anyone who has ever been stuck with a low battery on their smartphone knows, getting power to all this is fundamental. I just got fascinated by the challenge of trying to achieve this sustainably for future generations. Plus, you get to work with some really cool and amazing technology and people.

Can the UK meet its target to supply 30% of its electricity demand from renewable sources by 2020?
<>In June this year, 50% of electrical power was produced from renewables for a short while. So the target of a high proportion of renewable energy is achievable – but it requires a long-term strategy. That in turn means clear and binding decisions by government on our future energy plans to allow energy companies to make the necessary long-term investment in the UK.

In June this year, 50% of [the UK’s] electrical power was produced from renewables for a short while

Your research has led to patentable results. How close are these to being put into practice?
<>Our ideas are being developed by people around the world. China, Korea and even NASA are working on some of the concepts, and our work is being used by people active in this area. However, we will only see these devices appearing once we see large high-voltage DC networks emerging, which will be a few years yet. However, before you put such equipment on the network, there are several years of writing guidelines and specifications to ensure effective and safe use of such installations – so the research has direct relevance even now.

Europe is leading in the development of offshore wind – where else in the world do you see potential?
<>China, Japan, India and North America are also active in this area and we expect to see rapid development of the technology by them.

What are the next steps for your research?
<>We will continue to work with manufacturers and utilities in this area to look at the route to commercialisation and at the implications of such equipment on existing hardware. 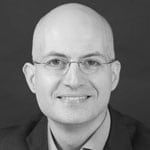 Professor Barnes and his team are developing a smaller, faster current breaker for offshore use to aid the integration of offshore wind farms into the National Grid.