Engineering & Technology
Constant exposure to noise is an increasing problem in developed countries, with impacts not only on industry but also our health. Key culprits often accused of creating noise include airports and wind farms. Professor Phil Joseph from University of Southampton is heading up a team of scientists focused on reducing noise pollution through the development of new aerofoil design. The team, from a consortium of four universities (Nottingham, Southampton, City (London) and Brunel) with industrial support from Airbus and Vestas, have achieved noticeable noise reductions of about 10dB – far surpassing previous designs.

According to health studies, loud noise is not only responsible for hearing loss but also causes psychological and physical stress, and can contribute to reduced workplace productivity. It is also the biggest work-related problem affecting workers in the construction and manufacturing sectors. Those who live near airports and wind turbines frequently complain of dizziness, headaches and sleep disturbance. The noise generated by wind farms or aeroplanes taking off and landing is emitted across a wide area and is difficult to eliminate. One group of scientists directed by Prof Phil Joseph and including Dr Tze Pei Chong, Professor Kwing-So Choi, Professor Alfredo Pinelli and Dr Mohammad Omidyeganeh, is focused on overcoming this problem. They plan to introduce new designs of aerofoils which are more efficient in reducing noise and can be applied in a wide range of conditions, conserving their performances. 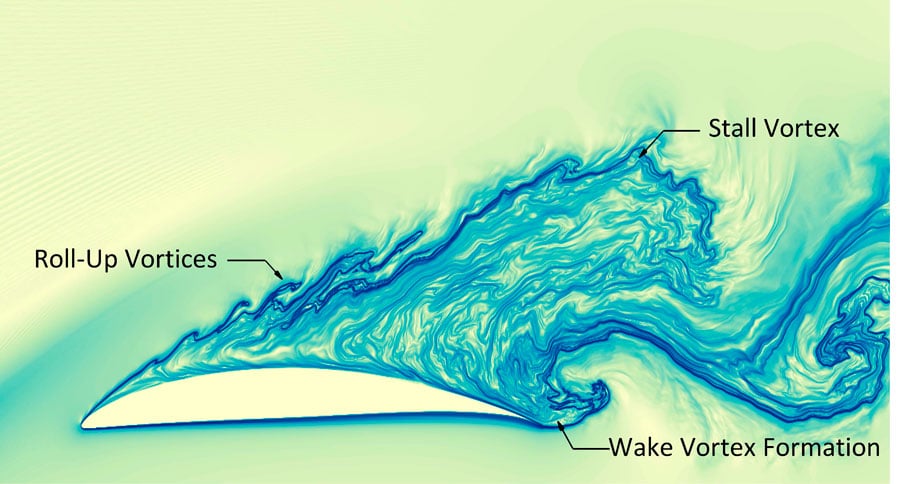 Causes of noise
The precise mechanisms behind noise generation on aerofoils are not wholly understood, although it is known that the dominant sound source is located on the aerofoil surface (the blade of a wind turbine or an aeroplane’s wing). Aerofoils generally have a rounded leading edge (that hits the air first) and a sharp trailing edge (from which the air flows off). When the leading edge of the aerofoil interacts with a turbulent fluid flow (this can be a liquid or a gas e.g., the atmosphere), an aerodynamic force is produced.

Aerodynamic force is composed of drag and lift, both generated when an aerofoil (e.g., an aircraft’s wings) interacts with a fluid (e.g., the atmosphere). We can think about drag as friction between the surface of the aircraft’s wings and the air molecules. Lift is the force generated by the wings deflecting the air molecules downwards. It acts perpendicular to the direction of flow and is what holds the plane in the air.

As a side effect of the unsteady aerodynamic force acting on the aerofoil, noise is also produced. This noise increases when the unsteady force is acting on the wings or blades at large angles of attack. As a result of regions of turbulent air passing over the aerofoil leading and trailing edges, acoustic waves are created. Acoustic waves can bend around obstacles and spread out from small openings. The creation of noise by rotating aerofoils is more complex than air passing over a stationary aerofoil. The faster the blades cut the air, the higher the frequency of the noise generated there. The trailing eddies generate random noise, the frequency of which is higher at the tip of a wind turbine for example, because it is moving faster.

Humpback whale and wind turbines
Nature has always been an inexhaustible source of ideas for technological innovations. For the team of scientists aiming to reduce noise generated by aerofoils, the observation of the humpback whale’s flipper helped them understand the mechanisms of undulations better. The scalloped edges of these whales’ flippers give them an enormous advantage in underwater acrobatics. Their technique of hunting is called bubble net fishing. Whales make sharp U-turns and pirouettes to concentrate their prey inside a ‘net’ of bubbles which the fish cannot cross. The scalloped edges of their flippers allow them to make a more acute angle of turn than would be possible with smooth edges: it allows for an abrupt change of the position without the so-called stall. The idea of serrated leading edges is passing now from the test phase into the production process: replicating this scalloped design on wind turbine blades resulted in reduced drag, quieter functioning, and increased efficiency.

Owl-inspired turbine blades
Owls are well-known for their noiseless technique of hunting: they can silently approach their prey without being detected thanks to the unique serration feature at the edges of their wings. Modification of both leading-edge and trailing-edge geometries using serrations, as in the owl’s wings, can not only improve the aerodynamical performance but can also diminish unwanted noise. The group based their research on this fact and presented a detailed experimental study in which they tested the combination of sinusoidal leading edge undulations and trailing edge serrations interacting with a turbulent flow. Their experiments proved that a drastic noise reduction can be achieved by combining the two modifications. An important finding of the study is that the serration can change the hydrodynamical and acoustical fields simultaneously. Noise reduction by serration is found to be a collective effort underpinned by the reduction of the turbulent energy of the flow, as well as the acoustical destructive interference across the edges.

Secrets of shark skin
Another promising technology that the group is planning to work on involves using ‘riblets’ to reduce noise. Riblets are longitudinal raised grooves on the surface which successfully reduce drag in pipework systems and wind turbines. Riblets have been used by America’s Cup yachts and for swim suits to improve speed in competition. Flight tests of riblets have been carried out using Airbus A320 to show reduction of drag by two percent. The pattern used is similar to that present on shark skin, which is not smooth but covered with tooth-like scales called denticles. This skin with its tiny V-shaped scales, decreases both turbulence and drag. As a result, sharks can swim faster and more quietly.

Computer simulations
The team’s research project combines these three nature-inspired technologies using computer modelling with promising results. They are developing and optimising these technologies to be available for a wider range of loading conditions and flow speeds.

The team run a computer simulation of fluids to recreate turbulent flows appearing in oceans or the atmosphere. The simulations use Navier-Stokes equations governing the motion of fluids: these are similar to Newton’s second law but are applied to fluids (gas or liquids). The computer calculates the solutions to these equations for a specific set of conditions and allows the team to predict the velocity and pressure of the fluid in a particular area.
The parameter that determines the computational cost for finding a numerical solution of the Navier-Stokes equation is Reynold’s number (Re), describing the ratio of inertial to viscous forces. In more simple terms, it determines whether fluid flow is laminar or turbulent. Low Re characterises smooth and slow flow; high Re describes chaotic and unstable fluid movement.

The crucial requirement for the reduction of aerofoil noise is that flow along the boundary should remain in direct contact with the aerodynamic surface. Using a simulation called Large eddy numerical simulation, the team were able to demonstrate that aerofoils with leading-edge undulations had boundary layer-flows that remained attached to the surface under higher angles of attack than in previous designs. During the past decade, they have demonstrated that leading-edge undulations could increase the lift by 60 percent and reduce drag by the same amount. They also showed that undulations can dramatically decrease the produced noise with a reduction of about 10dB.

Currently, the group’s work is supported by an EPSRC grant. The main goal is to integrate all of their findings in order to reduce noise in aircraft engines, aircraft wings, wind turbines and cooling fans. The increasing popularity of unmanned air vehicles (drones) in a wide range of fields (military operations, humanitarian aid) also motivates increased research of aerofoils under large angles of attack and at reduced size. The team’s research shows that for noise reduction, the best strategies involve the modification of the noise source – the turbine blades. Integrating three innovative leading-edge profiles – double-wavelength, chopped-peak and slit-root serrations – simultaneously provides reduction of noise and enhances the general aerodynamic performance. Thanks to these discoveries, we are closer to obtaining clean energy from quiet wind farms and reducing noise pollution from airports.

Can you describe how Large eddy simulation works and why exactly you are using this method?
<>In the majority of industrial and natural turbulent flows the size ratio between the smallest and the largest vortices may become huge to an extent where it becomes impossible to computationally resolve all the eddies embedded in the flow. To overcome this problem a filter that separates the small eddies from the large ones is applied to the Navier-Stokes equations leading to a new set of equations that model the motion of the large eddies only. These equations incorporate a model that mimics the drainage of energy exerted by the filtered small-scale motions from the resolved large scales.

Are any of your technologies currently in use?
<>No, not yet.

What was the most surprising finding you made during your research?
<>Although the history of aircraft and associated aerofoil development is old, yet we were able to find a new shape of aerofoil that is more efficient and reduces noise at the same time.

What parts of your work do you find the most interesting and why?
<>We find it very interesting that nature has developed the best aerofoil that reduces noise (see owls), increases the lift force (see hump-back whales) and reduces skin-friction drag (see sharks). We – humans are learning from them for industrial applications.

Taking inspiration from nature for a new generation of quiet aerofoils was last modified: July 17th, 2018 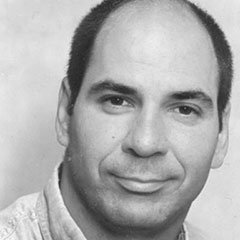 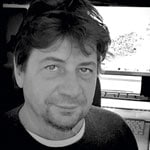 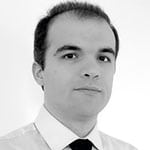 The team’s work aims to reduce the noise generated by aerofoils through three separate technologies. The results have applications in the aerospace and renewable energy