Health & Medicine
Immunotherapy, which uses the body’s own immune system to fight cancer, is a great step forward in cancer treatment. Unfortunately, however, it is currently ineffective in most patients. This resistance can be caused by a type of cell called a cancer-associated fibroblast, which builds protective defences around tumours. In a recent study, Professor Gareth Thomas and his team at the University of Southampton investigated the ways in which cancer-associated fibroblasts protect cancer cells – and discovered a new way to overcome these defences.

Immunotherapy is one of the most exciting developments in cancer treatment in recent years. In this type of treatment, the body’s own immune system is recruited to fight the disease by recognising and attacking ‘foreign’ cancer cells. Immunotherapy is part of a class of treatments known as biological therapies, which use substances made from living organisms, such as immune cells and antibodies, to treat disease.

In some forms of cancer, such as lung cancer and melanoma (a type of skin cancer), immunotherapy is already a common treatment. For other tumour types, researchers are continuing to investigate ways to optimise the therapy, so that it can be used to improve the survival of many more cancer patients.

While the immune system is effective against a huge range of infective diseases, cancer cells have developed sophisticated ways of avoiding immune destruction. Normally, immune cells (or lymphocytes) called T-cells would eliminate abnormal cells – however, many cancers “block” this process and have developed different mechanisms to shield them from immune attack. One of the goals of immunotherapy is to identify and target these mechanisms so that immune cells can function correctly and destroy cancerous cells.

Immunotherapy resistance
Currently, the most successful immunotherapies use antibodies directed against ‘immune checkpoints’ found on T-cells. Immune checkpoint proteins act as natural regulators of the immune system; they inhibit T-cell function, acting as brakes to prevent immune responses from getting out of control and attacking normal cells indiscriminately. When this regulation goes wrong, it can result in autoimmune diseases such as rheumatoid arthritis and multiple sclerosis. However, cancer cells take advantage of this system, by stimulating the immune checkpoints on T-cells; this dampens the T-cell response and protects the cancer cell from attack.

CAFs protect tumours from attack by the immune system by triggering the development of a defensive shield
around the tumour.

Researchers have successfully developed blocking antibodies against two immune checkpoint proteins, CTLA4 and PD1/PDL-1. These antibodies effectively remove one of the tumour’s key defences and allow the immune system to attack the cancerous cells. Unfortunately, most patients (around 80%) fail to respond to this type of treatment. It seems that, in many of these cases, lymphocytes get “stuck” at the edge of the tumour, and so are unable to infiltrate into the cancer and destroy the target cells. Finding routes for lymphocytes to enter tumours is therefore a key goal for some scientists working on immunotherapy, as it could greatly increase the number of patients who could benefit from this treatment.

Targeting cancer-associated fibroblasts
Professor Gareth Thomas of the University of Southampton leads a research team focusing on a particular type of cell called cancer-associated fibroblasts (CAFs). Normal fibroblasts maintain the natural structure of tissues and play a major role during wound healing, where they become ‘activated’ and secrete extracellular matrix − a network of collagens and other proteins which produce scar tissue. Uncontrolled activation of fibroblasts results in tissue fibrosis, including organ fibrosis and atherosclerosis, and it is thought that around 45% of deaths are related to fibrosis in some form or another. Cancerous cells also have the ability to “activate” fibroblasts, turning them into CAFs. These cells are found in large numbers in many types of tumour cancer and affect tumour development in multiple different ways. For example, CAFs trigger cancers to grow more rapidly and spread, and recent studies have shown that CAF shield tumours from immune attack. A significant proportion of cancers are CAF-rich; these usually behave aggressively and are associated with poor patient survival.

In recent work, Professor Thomas and his team investigated exactly how CAFs regulate immunotherapy resistance and identified a therapy to overcome this. To do this, the researchers used a variety of experimental techniques, including mouse models specifically developed by this research group, to more accurately reflect the CAF properties of human tumours. The researchers tested the effects of CAFs on different types of immunotherapy, including vaccination and checkpoint inhibition, as well as examining how CAFs affect the function of different types of immune cell. The group had previously identified the enzyme, NADPH Oxidase-4 (NOX4) as playing a major role in activating and sustaining CAF, and the researchers also tested a drug called Setanaxib (Genkyotex), a small-molecule NOX4 inhibitor, to see if it could successfully block the activity of CAFs and increase the likelihood of successful immunotherapy.

Revealing the role of CAFs
The team discovered that CAFs function by specifically excluding a group of lymphocytes, CD8+ T cells, from tumours (another type, CD4+ T cells, are able to enter). CD8+ T-cells are important effectors of the immune system and are responsible for killing cancer cells; most current immunotherapies depend on the ability of CD8+ T cells to infiltrate tumours effectively. In tumours containing CAF, CD8+ T-cells accumulated at the edge of the tumour mass; this exclusion effect resulted in resistance to anti-tumour vaccination and checkpoint therapy.

Effectively, CAFs protect tumours from attack by the immune system by developing a defensive shield around the tumour. In the mouse models, artificially-created high levels of CAFs led to immunotherapy resistance, as the lymphocytes were unable to successfully penetrate the tumour. The team are currently investigating how CAF produce this effect, examining how CAF affect T-cell function and movement.

NOX4 – the key to neutralising CAFs?
Until now, treatments that target CAFs as part of cancer therapy have been unsuccessful. This is likely due to the fact that not all CAFs are the same; in fact, they are a heterogeneous group of cells that share certain features, with some CAFs even shown to suppress tumour growth. Recent studies using single cell RNA sequencing have shed some light on CAF heterogeneity, and identified different CAF subpopulations, but up to this point, the lack of understanding of CAF phenotype, function and regulatory mechanisms have made targeting CAF difficult and resulted in a lack of specific therapeutic targets.

In previous work, Professor Thomas and his colleagues demonstrated that NOX4 triggers CAF activation in human cancers. In their recent study, the team built on this discovery by using the drug Setanaxib, a NOX4 inhibitor, to inhibit CAF activation. They found that the drug prevents CAF differentiation (the process by which a cell develops into a more specialised type). Even more significantly, they discovered that Setanaxib can “normalise” previously-established CAFs, so that they behave more like a normal fibroblast.

CAFs are not fixed in their final form, but need the continuous activity of NOX4 to maintain their
cancer-associated state.

In a critical step towards more successful immunotherapy, the team showed that CAFs are not fixed in their final form, but need the continuous activity of NOX4 to maintain their activated state. NOX4 inhibition was able to both prevent and reverse CAF formation in mouse tumours, triggering a fundamental change in the environment surrounding the tumour. The tumour-protective power of CAFs was effectively eliminated, allowing CD8+ T-cells to enter tumours and kill their target cells.

This finding was proven by the final stage of the study: combining Setanaxib with several different currently-available immunotherapies, including anti-tumour vaccination and anti-PD1 checkpoint therapy. The combination of Setanaxib with immunotherapy was able to promote the immunotherapy response in CAF-laden tumours that were previously resistant to the treatment.

Setanaxib has several other advantages that make it an excellent choice for further investigation as a cancer treatment: it has already been tested in several clinical trials for fibrotic conditions (kidney, liver lung fibrosis; NCT03226067, NCT02010242), and is known to be extremely safe; it is also simple to administer, and effective, when taken orally.

Towards more successful immunotherapy
Despite the exciting potential of immunotherapy, CAF-rich tumours respond poorly to current treatments, resulting in immunotherapy resistance in a large majority of patients. Professor Thomas and his colleagues believe that targeting CAFs with NOX4 inhibitors, as successfully demonstrated in their research, offers hope for more effective treatment of a wide range of cancers. In the relatively near future, these discoveries could benefit many cancer patients, some of whom may currently have few alternative treatment options.

Are there other potential targets for blocking the activity of CAFs?

<>TGF-ꞵ signalling is central to CAF differentiation and TGF-ꞵ1-neutralising antibodies can promote response to αPD-L1 immunotherapy. However, we, found that targeting TGF-ꞵ did not normalise the CAF phenotype or reduce CAF levels in tumours. Moreover, TGF-ꞵ1 is a pleiotropic cytokine with roles in tissue homeostasis and tumour suppression, and global TGF-ꞵ1 targeting is therefore a potentially risky strategy. Identifying mechanisms by which CAF modulate tumour immune evasion could be a therapeutic strategy. CXCL12 expression by CAF can mediate immunotherapy resistance, and inhibiting its receptor (CXCR4) has been shown to improve response to checkpoint therapy. 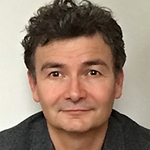 Gareth Thomas is Professor of Experimental Pathology at the University of Southampton and a Consultant in Cellular Pathology.

The Gareth Thomas laboratory focuses on the role of cancer-associated fibroblasts in cancer, understanding how they form and what they do, particularly how they can be targeted as part of cancer therapy.